One of Britain’s most prolific conmen today admitted wooing a divorcee by posing as a SPY and fleecing her out of £299,000.

Mark Acklom, once an infamous schoolboy fraudster, posed as an MI6 agent and a Swiss banker in a bid to seduce Carolyn Woods.

Over the course of a year-long relationship, Acklom, now 45, promised to marry the mother-of-two and tricked her into handing over the huge sum.

But before they could walk down the aisle, he vanished with the cash, leaving Carolyn emotionally and financially ruined and on the brink of suicide.

Avon and Somerset Constabulary began investigating Acklom, who told Carolyn his surname was Conway, after she reported the fraud. 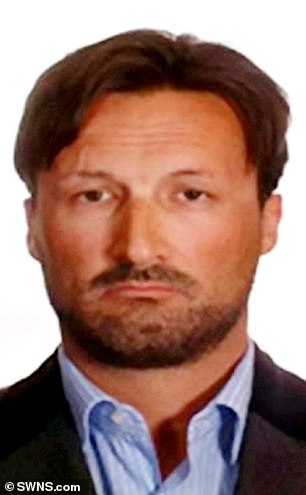 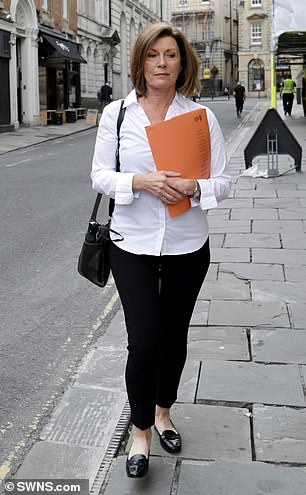 Mark Acklom, once an infamous schoolboy fraudster, posed as an MI6 agent and a Swiss banker in a bid to seduce Carolyn Woods (shown arriving at court on Tuesday) 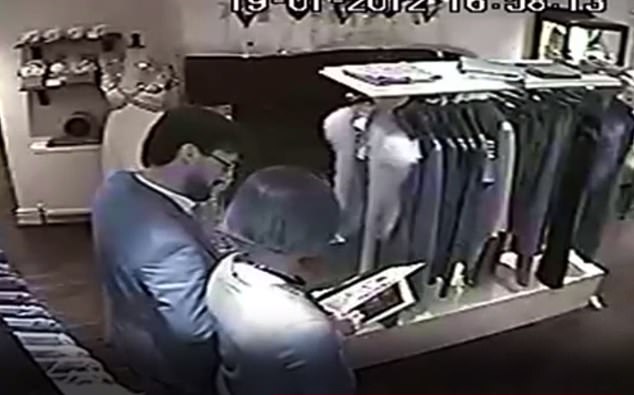 Ms Woods met Acklom in 2012 when he went into her boutique to buy a jacket (pictured), telling her he was a Swiss banker visiting the UK to buy a Cotswold airfield 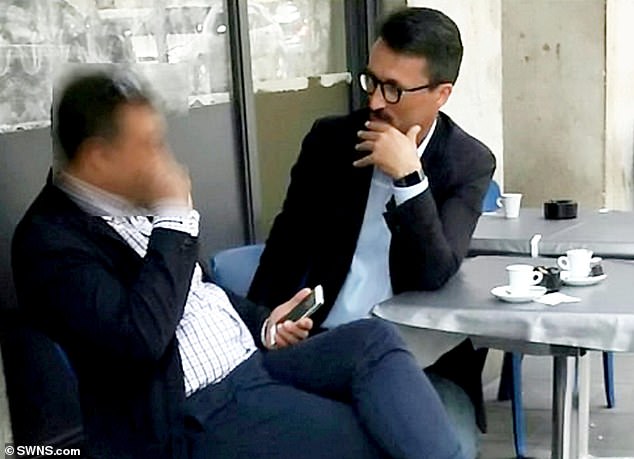 Acklom (right), caught on camera by one of his alleged victims at a cafe in Geneva in 2017

At the time he was awaiting trial in Murcia, Spain for defrauding two brothers into paying him £200,000 as a deposit on the sale of buildings he did not own.

He was jailed for three years but later and went back on the run after British police issued an arrest warrant in his name.

Earlier this year he was arrested in Switzerland, after apparently trying to escape police by jumping off a balcony.

Acklom was arrested in a plush apartment in Zurich where he was living with his wife and children, after five years on the run.

Today at Bristol Crown Court, he admitted a series of fraud and money laundering charges.

Heartbroken Carolyn, of Bath in Somerset, previously said: ‘I was completely devastated, he left me destitute and destroyed my life. 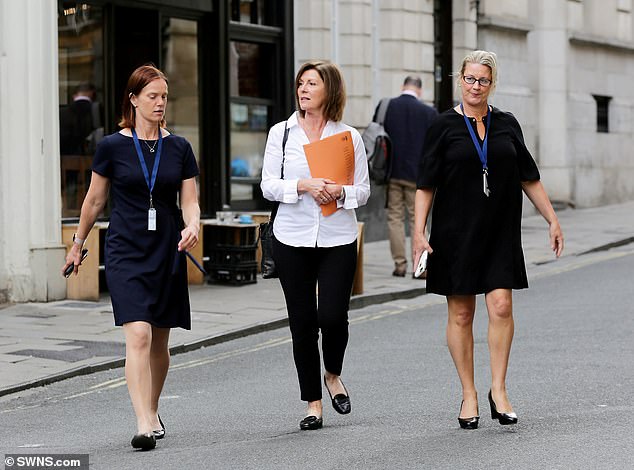 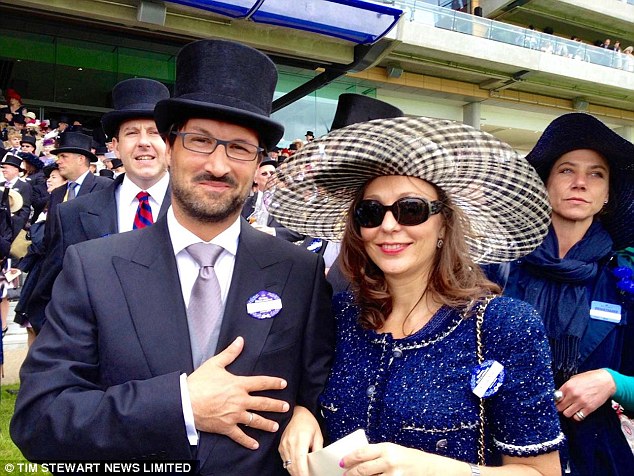 ‘I felt as though I had fallen in love. He told me he had never felt this way about anyone and we must get married.

‘I’ve still got the wedding dress I never wore. It was all a charade. At the time I actually wished he had killed me. I was suicidal.’

Carolyn met Acklom in 2012 when he came into her boutique to buy a jacket, chatted her up and said he was a Swiss banker visiting the UK to buy a Cotswold airfield. 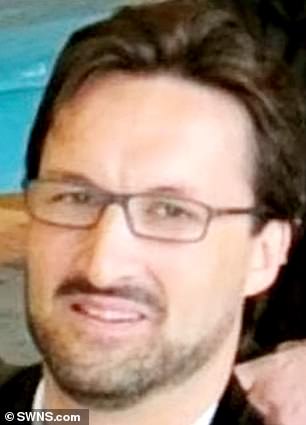 Acklom was educated at Dulwich Preparatory School and then Eastbourne College

They sparked up a relationship within days and moved in together, though she later discovered he had a second home nearby with his wife and two young children.

Within days they had begun a romance and moved in together, though she later discovered he was also living nearby with his wife and two young children.

Carolyn, in her early 60s, said: ‘He was flirtatious, charming and very entertaining.

‘He has a great presence and charisma, he exudes confidence and the air around him was electric. I was caught up in a whirlwind of excitement.

‘He said he was doing things for The Prince’s Trust and helping fundraising at Clifton College and everything was cloaked in respectability.

‘One of the most extraordinary things he told me was that it was all a cover and he was an MI6 agent. It sounds very far-fetched, but he convinced me it was true.

‘We were in London and he said he’d been called in by his boss, so he drove me to the MI6 building and I watched him walk down into a car park past two armed policemen.

‘There are no photographs of us together because he said his handlers would not allow it because of his security.’ 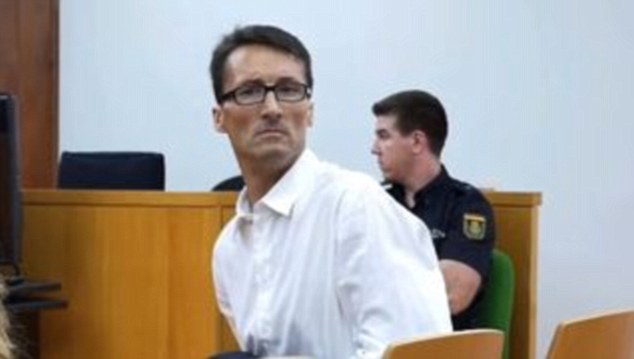 Acklom has been jailed three times in Spain for a variety of fraud offences. He also changed his name to Marc Ros Rodriguez

Carolyn claims that one day, she heard him saying he was struggling with money and offered to lend him some cash.

‘He began to get to me psychologically and I became frightened,’ she added.

‘What he was trying to do was isolate me, he got me to leave my job, move in with him and by the time I had given up my independence I was a prisoner.’

Carolyn said her two daughters believe she was brainwashed by Acklom, who she later learned had been jailed for fraud as a public schoolboy.

At 16, who was studying in Eastbourne, East Sussex, stole his dad’s gold Amex card, posed as a stockbroker and hired jets to fly his friends around Europe.

Mark Acklom today pleaded guilty to five counts of fraud – out of an initial 20 charges against him.

Bristol Crown Court heard that he made false representations to Carolyn Woods, with whom he was in a committed relationship at the time and had agreed to marry her.

The court heard that Acklom told Carolyn that all the loans were to renovate a property that he owned and was developing.

His guilty pleas were accepted by Judge Martin Picton.

The remaining 15 charges on his original indictment will not be pursued.

The youngster even convinced a building society to give him a mortgage of nearly £500,000 which he used to buy a small mansion in London.

He has since been jailed three times in Spain for a variety of fraud offences. He also changed his name to Marc Ros Rodriguez.

The investigation began when Ms Woods reported to police that he posed as a Swiss banker and conned her into lending him £299,000.

She says he told her he was borrowing her life savings for renovation work at properties in Bath, Somerset.

Her daughter Lara recalled how he took Carolyn to Harrods on shopping trips, and encouraged her to move into a house he claimed he owned in The Circus, in Bath.

She says Acklom treated Carolyn to a Volvo XC60 – which later turned out to be leased, and also claimed people wanted him dead.

He then vanished, and claimed to be working undercover in Syria – telling Carolyn the house was bugged to increase her paranoia.

By the end of 2013 Carolyn was broke and could no longer afford the rent on the house in Bath.

Police suspected Acklom was in Spain, and a European arrest warrant was issued.

But when he could not be found they added him to Operation Captura – a multi-agency initiative involving the NCA and Crimestoppers to track down Britain’s most wanted fugitives abroad.

Acklom was born in the Lambeth district of London in 1973, the oldest of four children.

He was educated at the private Dulwich Preparatory School and then Eastbourne College.

Imam jumps to PM's defence after he said Bourke Street jihadi was a 'radical, extremist terrorist'
Could this be Atlantis? Satellites spot ancient ruins flooded off the Spanish coast
Rotherham Asian sex gang victim made pregnant at 15 speaks of horror at father given access
Britons hit the beach and bare their legs in blazing 64F sunshine
Shoppers are left stunned by weird £35 mesh neon green unitard sold on ASOS
Iran warns America that its response to any military strike will be 'strong and crushing'
Mother receives $400 worth of toys after her children order online without her knowledge
Donald Trump ignores compulsory masks sign as he tours MASK factory