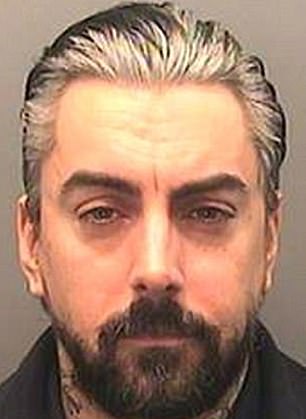 The ex-Lostprophets singer, 42, was serving time in the maximum security HMP Wakefield jail in West Yorkshire when he went through a strip search, a jury heard

Jailed sex offender rock star Ian Watkins hid a mobile phone up his bottom to contact a woman he had been in a relationship with, once texting her to say ‘I’m the devil on your shoulder’, a court heard today.

The ex-Lostprophets singer, 42, was serving time in the maximum security HMP Wakefield jail in West Yorkshire when he went through a strip search, a jury heard.

The search did not uncover any contraband but he handed the phone over to prison officers in the hope of keeping a visit from his mother, the court was told.

According to former girlfriend Gabriella Persson, Watkins had used the device to contact her from behind bars, and they exchanged several texts and voice calls before the device was discovered.

Miss Persson said she met Watkins about 10 years ago when she was a 19-year-old Lostprophets fan, and they began an ‘on off’ relationship until 2012.

In 2016, after Watkins had been jailed for sex offences, she began to write to him in prison, and he would write back and phone her from an official prison phone.

She told the court that in a letter a few months before he began texting her he addressed her her as ‘Gabriella-Ella-Ella-eh-eh-eh’, a reference to the Rihanna song ‘Umbrella’.

She said the first text from a mobile phone she did not recognise on March 5 called her my that name. ‘I said who is this?’ she said.

Watkins replied: ‘It’s the devil on your shoulder.’ He also added: ‘I’m trusting you massively with this.’

They spoke twice for about 10 minutes and voice calls and exchanged further text messages over the following few days before Miss Persson researched the legality of prisoners having mobile phones in their cells.

‘I discovered that I could potentially get into trouble for speaking to him on the phone,’ she told the jury of nine men and three women.

She phoned the prison to report Watkins and deleted the text messages. Watkins told the police that the mobile was the ‘wing phone’ and he was made to keep it by fellow prisoners who were threatening his life.

He also claimed the same inmates wanted him to contact his groupies and extort money from them.

Miss Persson told the court that none of the texts or telephone conversations were about money or at all threatening.

Watkins, who appeared in the dock with black shoulder length hair, a goatee beard, white Star Wars T-shirt, earrings and wearing an inverted crucifix around his neck, listened as prosecutor Stephen Wood opened the case against him at Leeds Crown Court earlier today. 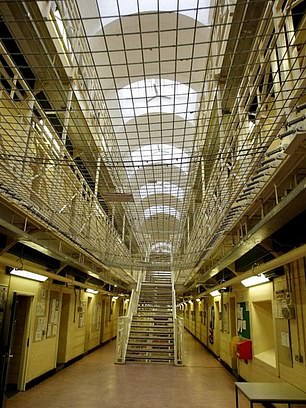 Mr Wood said: ‘Ian Watkins was a serving prisoner at Wakefield. He is the former front man of a well-known rock group called the Lostprophets.’

On March 10, last year, a prison officer Ashley Howell went to Watkins’ cell to remove him to a sterile cell, so that his own cell could be searched for a mobile phone prison authorities believed he had.

‘The defendant was strip searched and nothing was found on him,’ said Mr Wood. Watkins also denied having a mobile phone on him during the search, he said.

But Watkins was also concerned about whether he would be still allowed a visit from his mother that afternoon and was told that was a decision that would be made by the deputy governor.

Watkins, who redressed, was kept in the sterile cell and checked 15 minutes later by Mr Howell.

Mr Wood said: ‘When prison officer Howell went to the cell the defendant started to talk with the officer through the closed door. He asked if he could still have a visit from his mum if he handed over the telephone.’

It is alleged that Watkins confirmed he did have a mobile phone on him and Mr Howell went to get latex gloves and an empty bowl.

‘The defendant the reached into his underwear and after 10 seconds pulled out a small white GTStar mobile telephone,’ said Mr Wood.

The jury was shown a 8cm long GTStar phone – branded the smallest phone in the world – which was passed around in a clear plastic exhibit bag.

They were also shown a small mobile phone charger, which was allegedly recovered from his cell.

Watkins has pleaded not guilty to possession of mobile telephone in HMP Wakefield between March 4 and 10, last year.