Talks aimed at preventing Heathrow staff going on strike and ruining thousands of people’s summer holidays will resume today, as passengers remain in the dark about whether they will be hit with less than 24 hours to go.

Heathrow has already cancelled 177 flights throughout Monday and Tuesday ahead of the possible 48-hour walk out.

But passengers have been left fuming after airport bosses refused to specify which flights are being cancelled – claiming it is up to individual airlines to decide.

Emily Razzell tweeted pleading with airport bosses to tell her if her husband Tim will be able to travel home from  tomorrow.

She asked: ‘My two-year-old really wants his daddy home. When will I know if I have to break his little heart by telling him that a strike has stopped daddy coming home?’

A Heathrow spokesman said: ‘We cannot provide this information. If this is released it will appear on the website. We recommend to keep in touch with your airline.’ 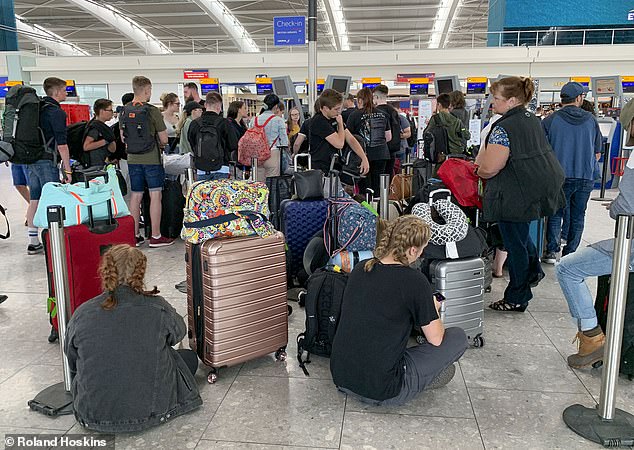 Union leaders met with Heathrow management under the chairmanship of the conciliation service Acas until 11pm on Friday and all day on Saturday.

Unite’s members voted by almost 9-1 to reject a pay offer Heathrow said was worth 7.3 per cent over two-and-a-half years.

The strikes would leave hundreds of thousands of holidaymakers devastated if they walk out amid the busiest travel period of the year.

Passengers have been left baffled that Heathrow are still unable to reveal who will get to go on their summer break and who won’t – with less than 24 hours to go.

Alex Lewer tweeted today: ‘Finding it utterly ridiculous that with under 24hrs to go, @British_Airways and @HeathrowAirport refuse to publish a list of the 177 flights cancelled on Monday.

‘I feel they are playing it safe – hoping for the strike to be resolved at the last minute.’

Someone else wrote: ‘This is absolutely crazy! I am due to fly out on Tuesday and BA can not give any updates or information at all….

‘Just told to keep checking online….it may be that flight will be cancelled when arrive at the airport!!! Think it could be chaos!! Someone must have a clue!!’

A Heathrow spokesman replied to some passengers this morning with the message: ‘Good morning, we can appreciate the confusion here.

‘As soon as airlines inform us which flights have been cancelled we will be able to pass on this information.

‘Passengers are advised to contact their airline directly as currently we do not know which flights will be impacted.’

More strikes are planned on August 23 and 24 if the dispute is not resolved.

Meanwhile more than 4,000 BA pilots are also planning to strike, with the airline claiming industrial action by its pilots could cost it £40 million a day and affect some 130,000 passengers daily.

A Heathrow spokesman said of their strike: ‘Unite have rejected our revised pay offer today.

‘While we are disappointed, we will continue to seek an agreement at Acas tomorrow.

‘Unite is proceeding with its unnecessary strike action on August 5 and 6 and we regret that passengers looking to get away on well-earned family holidays will be impacted.

‘177 departing flights have to be cancelled in preparation for this week’s strike in order to ensure the vast majority of passengers will be able to fly. 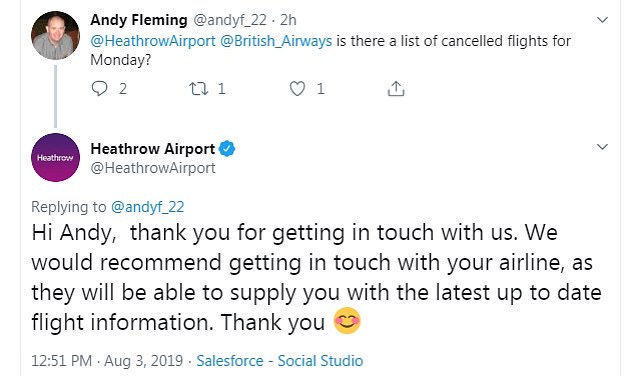 Andy Fleming wrote to the airline asking if there was a list of cancelled flights for Monday, and a spokesperson replied, recommending he gets in touch with his airline

‘Airlines will confirm with passengers what flights they will be consolidating and cancelling.

‘We have activated contingency plans which will keep the airport open and safe on both strike days.

‘We expect security queue times to be longer than normal and advise passengers to check our website for detailed information on how to prepare for their flights and when to arrive at the airport. 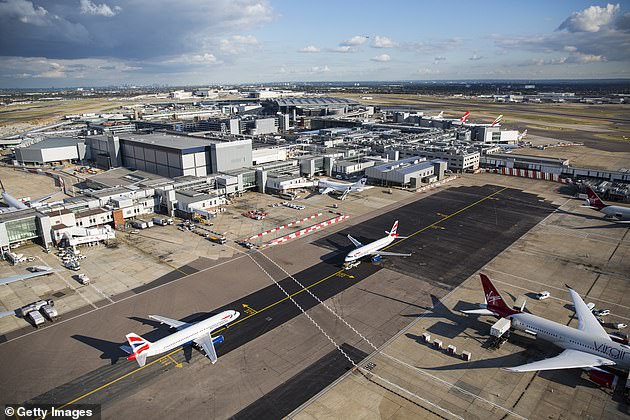 Passengers are being advised to contact their airlines to seek the most up-to-date information. File image of Heathrow pictured

Revealed: The militant British Airways pilot threatening summer of misery that could see hundreds of flights cancelled because he thinks 11 per cent pay rise for £100,000 pilots isn’t enough

By Mark Hookham for The Mail on Sunday

This is the young militant pilot behind plans for a crippling strike that could ruin the summer holidays of thousands of families.

Hardliner Mark Keane last year helped pilots at Ryanair to win union recognition and he is now threatening to land a devastating blow against BA.

Mr Keane, who has been a pilot with BA for four years, is pushing ahead with a strike at the height of the summer break that could see hundreds of flights cancelled.

Mr Keane, who lives in Dublin and commutes to Heathrow, became chairman of Balpa’s BA branch – known as the British Airways Company Council – earlier this year after an investigation by The Mail on Sunday revealed how his predecessor had sent a pornographic image of a man having sex with a chicken to five other union reps.

Airline sources claim Mr Keane – who is in his late 20s – is part of a new generation of militant BA pilots, many of whom were recruited in recent years from budget airlines and are now agitating for better pay and perks. 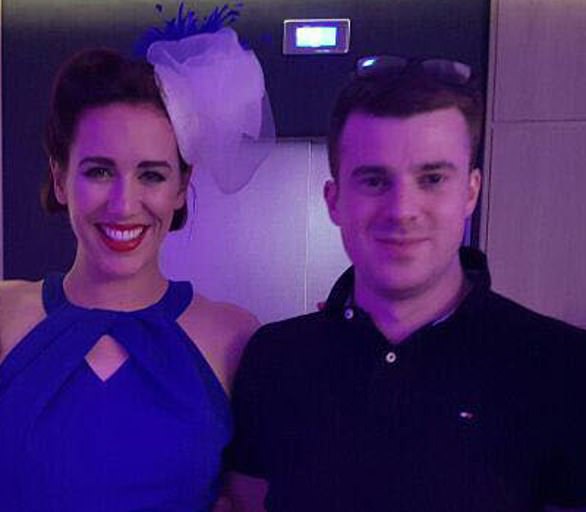 Hardliner: Mark Keane, pictured with a colleague at a 2017 international conference, is now threatening to land a devastating blow against BA

‘There is a bit of culture war going on,’ said one BA captain. ‘You’ve got the young lads that have come in and some of us more established pilots are saying, ‘Hold on, you signed these contracts and now you want to muscle your way into more money and better conditions.’ ‘

Mr Keane joined Ryanair in 2010 and was forced to apologise to the airline three years later when he was unmasked as the author of anonymous and false comments on a pilots’ forum about its safety procedures.

He flew with Norwegian for two years before becoming a BA 747 pilot in 2015. Sources say he soon became influential within Balpa by quietly helping persuade his former colleagues at Ryanair to join the pilots’ union.

Michael O’Leary, Ryanair’s chief executive, declared in 2017 that ‘hell will freeze over’ before the firm was unionised, but last year he was forced to formally recognise Balpa in the face of threatened strike action.

Having helped to humble one Irishman, Mr Keane has his sights on another – Willie Walsh, boss of the International Airlines Group, the owner of BA. 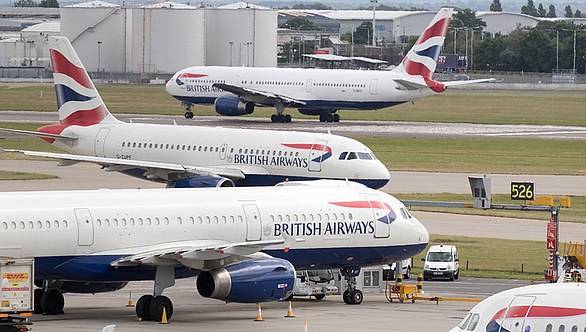 Pilots’ union Balpa is demanding a better deal from BA, having rejected an offer of an 11.5 per cent rise over three years (stock image)

BA says industrial action by its pilots could cost it £40 million a day and affect some 130,000 passengers daily.

Balpa has not yet set a date for strikes and talks about action will resume this week.

Balpa also recently balloted its Ryanair pilots for strike action in a dispute over working conditions. The result is due on Wednesday.

He was accused of forwarding the email to about 45 reps, but last night insisted he had been asked by a Balpa employee to forward it ‘to bring attention to what was viewed to be inappropriate behaviour’.

Balpa said: ‘Our reps are strongly supported by the mass of BA pilots who have voted overwhelmingly to reject BA’s pay offer and in favour of industrial action.’

Trump backs buyer boycott of Harley-Davidson
This little identified accent taking social media by storm will rework your hair right into a Panten...
Patients who need an ambulance from their GP surgery wait three times as long
Dozens of cockatoos flock to a picturesque beachside balcony after boy shares his breakfast
Homeowners allowed to do house extensions without planning permission under new rules
Wayne Rooney laughs with a mystery woman as they get into a hotel lift after seven hours of partying
Prince William appears in high spirits as he dons a suit and tie for charity gala
Free BBC TV licence for over-75s means tested from 1 August