Conceived as a cooler, hipper alternative to the annual summit for world leaders in Davos, Google Camp has been running in Sicily for seven years.

The 200 guests are picked by Google’s founders, Larry Page and Sergey Brin.

This year’s event is said to have focused on – although it is both a party and a place for attendees to swap ideas.

It has been calculated that in all, transporting all the guests to and from Sicily may release up to 900 tons of CO2 into the air. Attendees pay for their own travel to Sicily, but then Google foots the bill for everything else. 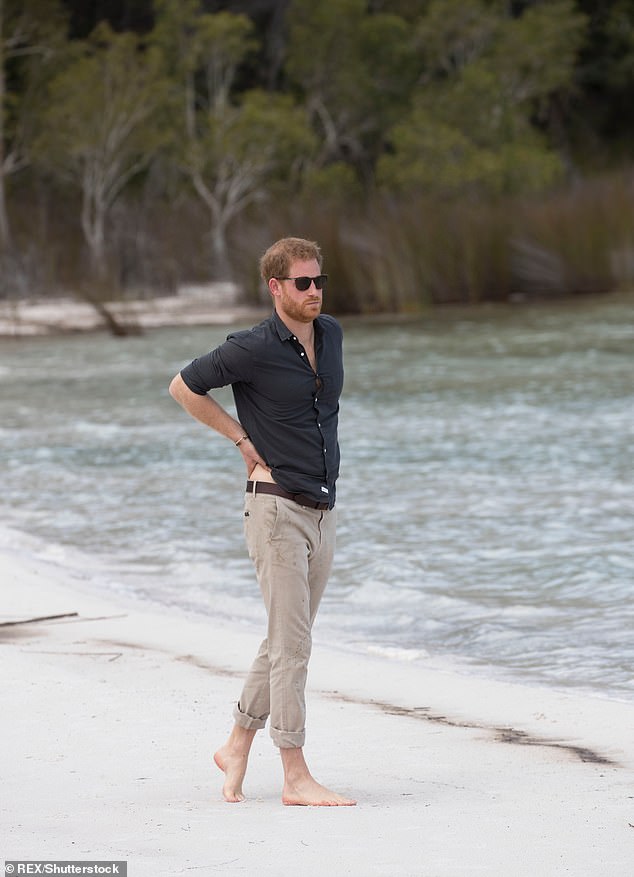 Conceived as a cooler, hipper alternative, Google Camp has been running in Sicily for seven years. Prince Harry (pictured on Fraser Island in 2018) was invited and is said by the New York Post to have given a passionate speech, barefoot, about climate change

A sprinkling of famous actors joined businessmen and other celebrities in Sicily for the festivities.

Among those seen and certainly there are Leonardo DiCaprio, Orlando Bloom, Bradley Cooper and actress Priyanka Chopra, who arrived with her pop star husband Nick Jonas on Tuesday.

Actors Sacha Baron Cohen and Woody Harrelson are also said to have been there.

Bono again is said to have attended, ditto Lars Ulrich of the rock band Metallica – the pair were seen partying in Monaco yesterday.

Prince Harry was invited and is said by the New York Post to have given a passionate speech, barefoot, about climate change. His media office declined all comment or guidance.

What does it all cost?

The £16million bill is chicken feed for Google – its global revenue in 2018 was £112billion. And the tech giant could do with some publicity which makes it look philanthropic and glossy, following tax avoidance controversies.

There have been repeated criticisms of Google’s habit of avoiding paying tax. In 2016 it paid a measly £25million corporation tax in the UK, even though its earnings in that period in the UK amounted to £6.3billion.

It does, though, have multiple links to the UK political establishment via Google employees such as Rachel Whetstone and Tim Chatwin, who both worked for David Cameron.

PM Boris Johnson has been to a Google tech camp, in Israel in 2015. The company has been fined three times by the EU for anti-competitive activities – being penalised a record £4billion in 2018 for breaking anti-trust laws by preventing the promotion of rival online search engines.

In 2018 the company paid off executive Andy Rubin, known as the ‘father of Android’ to the tune of £74million after sexual misconduct allegations. 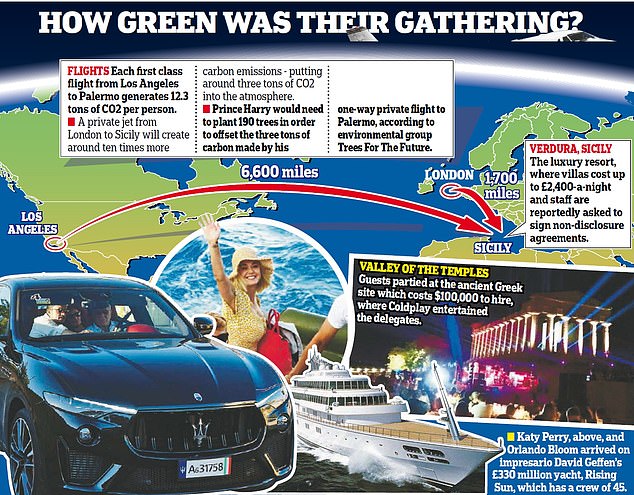 It has been calculated that in all, transporting all the guests to and from Sicily may release up to 900 tons of CO2 into the air. Attendees pay for their own travel to Sicily, but then Google foots the bill for everything else

Where is it held?

The Verdura resort in Sicily is renowned for golf, spa facilities and fabulous dining. There are two 18-hole golf courses, a tennis academy and one of the largest spa complexes in Europe. Accommodation is in suites and private rooms as well as three villas which have their own pools.

There is a massive infinity pool and stunning private beach, filled with imported white sand. There is also a dock for all the yachts. Rooms start from £730.

Who speaks (and sings)?

The event kicked off on Monday night with a Gala dinner at the Selinunte archeological park for 200 people. Coldplay’s Chris Martin performed (last year Sting did the honours).

The menu was overseen by Ritu Dalmia, the celebrity Indian chef who has a restaurant in Milan and is an ambassador for Italian cuisine in India.

A local Italian journalist said that the furniture was rustic, with wooden chairs to reflect the theme of the environment. Afterwards there was dancing. Young flamenco singer Rosalia also performed.

In the mornings, attendees are invited to listen to speeches which included Naomi Campbell talking about her friendship with Nelson Mandela on Wednesday and Prince Harry talking about the environment.

The itinerary was available to guests only via a password-protected website.

How do guests unwind?

Guests are free to eat and drink themselves silly at any one of the resort’s three restaurants and five bars. If they were paying, a prawn salad would cost £28, sea bream £82 and a portion of monkfish up to £127, according to an online review.

The guests were able to watch a carnival in the nearby fishing town of Sciacca and visit vineyards. They are given the use of £200,000 Maserati sports cars during the camp summit.

How tight is the security?

Local sources indicate huge security, with up to 100 security personnel and a control tower for security, with drones and ‘laser shield’ technology to disrupt long range photography.

Ironically, given that Google is in the media business, the guest list is considered confidential and the company declined to comment on it.

Guests are not supposed to talk about what happens – including not posting on social media at all. Staff are required to sign a non-disclosure agreement before participating, which is just how these very starry guests like it.