Swedish prosecutors have said that A$AP Rocky should be jailed for six months as they summed up their evidence at the end of his assault trial.

The American rapper, real name Rakim Mayers, ‘used more violence than was needed’ as he tried to break up a brawl in Stockholm on June 30, lawyer Daniel Suneson said in his closing argument.

Mayers and two co-accused – David Rispers Jr and Bladimir Corniel – admit getting into a fight with 19-year-old Mustafa Jafari, but say they acted in self-defence because he would not stop harassing them.

‘These three should be found guilty of assault, I have disproved their argument of self-defence,’ Suneson said, according to Swedish site . 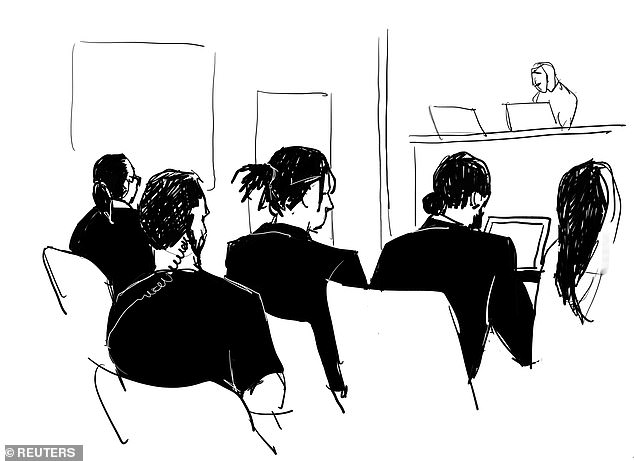 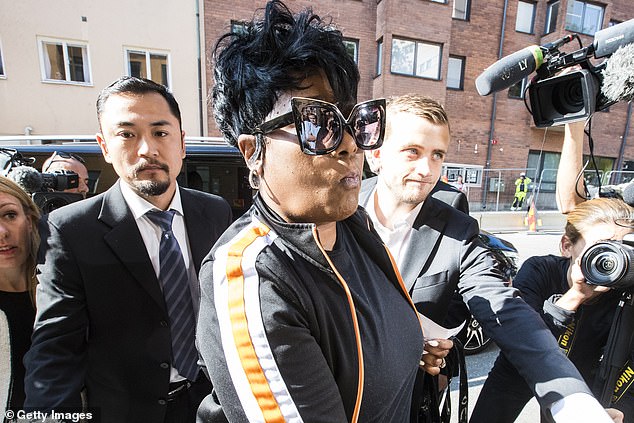 Renee Black, the singer’s mother, was among those in Stockholm District Court, having attended every day of her son’s trial so-far

‘It cannot have been self defence as they were five against two’, he added, indicating that Rocky was accompanied by his bodyguard and another person while Jafari was only accompanied by friend Dawod Hosseini.

The prosecutor spoke after a final day of witness testimony which focused on whether or not a bottle was used in the brawl.

During the day, two women who initially told police they had seen Rocky use a bottle in the brawl admitted that they hadn’t see it – and had only heard the glass break.

Mayers has admitted that he and his friends picked up bottles, but said they only did it to stop Jafari getting hold of them and put them down moments later.

Mayers was arrested on July 3 following the brawl in Stockholm on June 30. He has been in jail since then in a case that has caused celebrity outcry and a diplomatic rift between Sweden and the US.

He was charged with assault which carries a maximum of two years in jail, with a verdict expected on Friday.

When Mayers arrived in court for the third day of the trial he was dressed in a dark suit instead of the green prison clothes he had worn in court on Tuesday and Thursday. 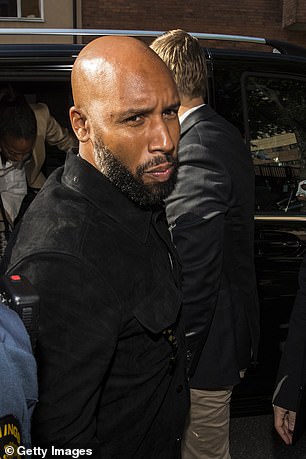 The court first discussed whether a new piece of evidence submitted by the defence should be accepted.

It concerned a previous assault conviction against the plaintiff, which the defence argued spoke to the plaintiff’s reliability and previous behaviour, but the prosecution said was irrelevant since the plaintiff and the accused had not met before the night in question.

The two women then testified via video-link, before 20-year-old Dawod Hosseini, who was with Jafari when the attack happened, took the stand.

According to , Hosseini said Jafari approached and told him that he had been in a fight with a security guard, and that the pair went back to confront him.

Hosseini said that, after a brief altercation, he ran away because he thought the group were holding bottles and expected Jafari to follow him.

However, when he looked back Jafari was being thrown on the ground.

Hosseini admitted to being unable to remember parts of the altercation because he was on tranquilizers at the time.

Timmothy Williams, Mayers’s security guard, was also questioned – telling the court that it was clear from the beginning that there was ‘something wrong’ with Jafari.

‘I’m a security guard. I know how to see those signs, when someone is acting strange,’ he said, adding: ‘His eyes were blank, as if he was on something. He only wanted trouble and only wanted to harass.’

At one point, Williams said that Jafari began throwing punches at him and that’s when Mayers decided to intervene.

Asked why a person would chose to defend their security guard, Williams responds that ‘he is a man with a good heart’.

Presiding judge Per Lennerbrant said proceedings are scheduled to conclude with closing arguments in the afternoon, although could be extended into next week.

When giving his own account of the events leading up to the brawl on Thursday, the rapper stressed that he felt ‘scared’ and that he and his entourage had repeatedly told the plaintiff to leave them alone. 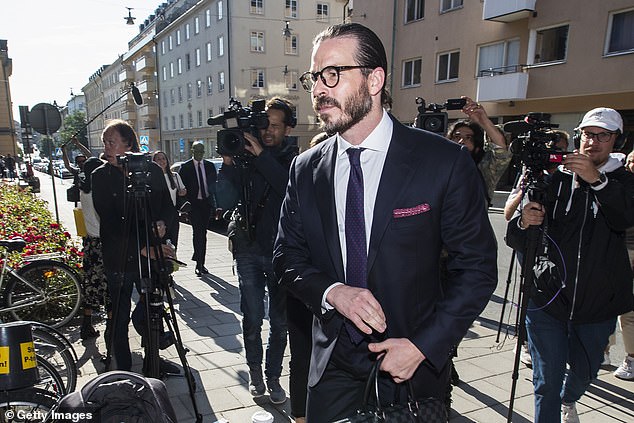 Slobodan Jovicic, attorney for A$AP Rocky, arrives on the final day of his trial 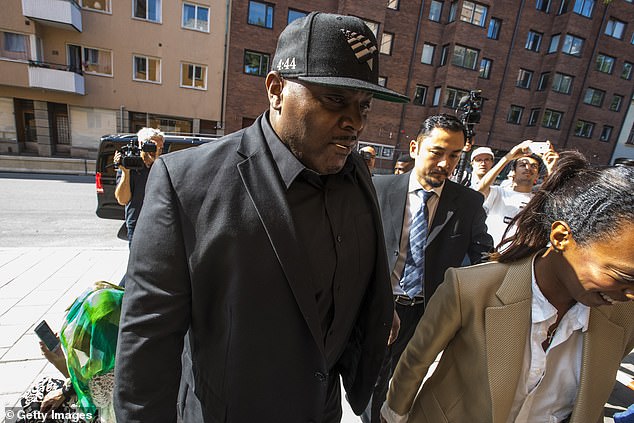 Timmothy Williams, bodyguard to A$AP Rocky who was initially arrested but later released, arrives to see the final day of the trial

Mayers conceded he threw the plaintiff to the ground and ‘kicked his arm’, but denied the prosecution’s claim that a bottle was used and insisted he only acted after the accuser and his friend began attacking his bodyguard.

The plaintiff has alleged that he was attacked by Mayers and his entourage when he followed them to ask about a pair of headphones that were broken in an earlier scuffle with the rapper’s bodyguard.

Much of the trial has centred around analysing videos and whether bottles had been used as weapons during the alleged assault.

In one video published by US celebrity news outlet TMZ, the rapper can be seen throwing a young man to the ground and apparently aiming several punches at him while he is down.

The court has also been shown videos posted on the artist’s Instagram account, purporting to show the lead up to the brawl in which Mayers appears to repeatedly ask the man and his friend to stop following him and his entourage. The prosecution has argued that the Instagram videos were heavily edited.

Once the hearings conclude, the court will announce a verdict date and rule on whether the accused should be detained in the meantime.

Considered by the court to be a ‘flight risk’, the rapper has been held in custody since his arrest.

Fans, fellow artists and US Congress members have been campaigning for his release. 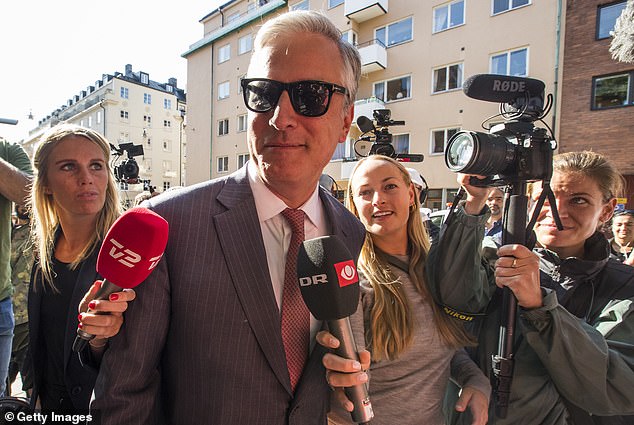 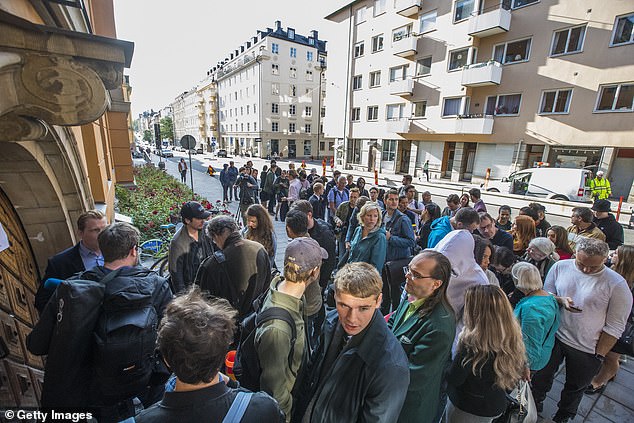 An online petition called #JusticeForRocky has garnered more than 640,000 signatures. Social media campaigns have urged fans to boycott Swedish brands such as IKEA.

US President Donald Trump has repeatedly called for the rapper to be freed, drawing complaints of interference from Swedish politicians.

The US Special Presidential Envoy for Hostage Affairs, Robert C. O’Brien, has been sent to attend the trial.

Swedish media also reported Thursday that the US embassy had sent a request to the Swedish Prosecutor General, to allow the rapper and the two others to stay in a hotel rather than in the remand prison where they are currently being held.

‘We responded that’s not how it works in Sweden,’ Karin Rosander, communications director at the Swedish Prosecution Authority, told the newspaper Expressen.