The US President was met by tens of thousands of protesters in the capital before he attended a D-Day commemoration service in Portsmouth.

Figures released by the Metropolitan Police show the force’s total costs came in at £3,419,905, with more than 6,300 officers deployed across the visit.

But despite the huge costs, Scotland Yard revealed just four arrests were made – one for possession of pepper spray and a Class B drug, one for criminal damage and two for outraging public decency. 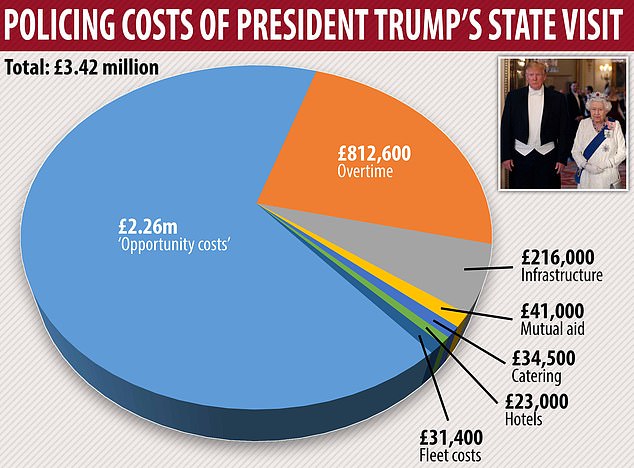 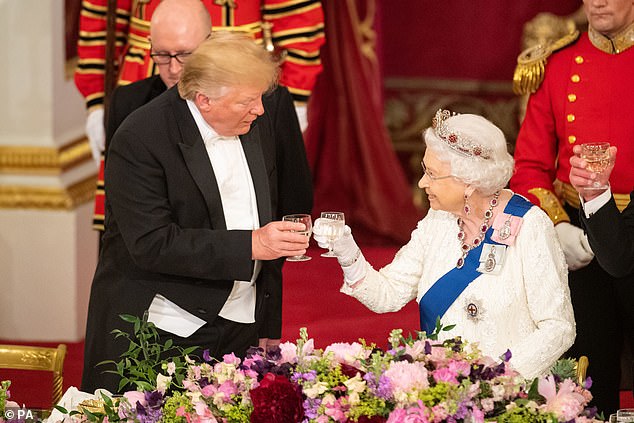 Mr Trump first official state visit began on June 3 and included a state banquet with the Queen at Buckingham Palace (pictured), before a two-night stay in Ireland 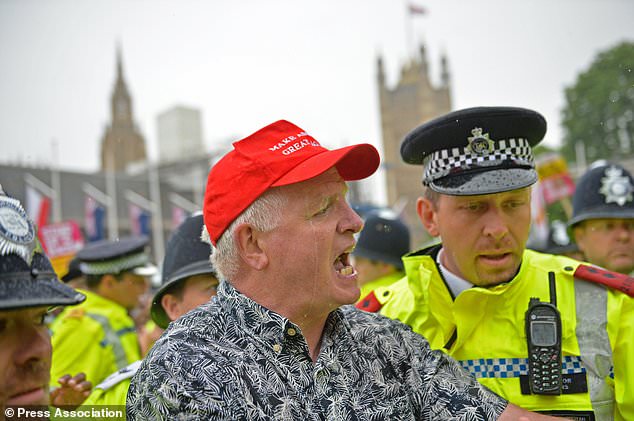 A Trump supporter is escorted by police after being covered in milkshake by anti-Trump protesters at Parliament Square. Just four arrests were made during the visit

The figures, released under the Freedom of Information Act publication scheme, do not include covert or protection officers, with the majority, some £2,261,425, listed as ‘opportunity costs’.

The Met spent just under £3m policing the president’s previous visit to the UK in 2018, although the total cost of that four-day trip came in at more than £14.2 million to forces across the UK.

Mr Trump first official state visit began on June 3 and included a state banquet with the Queen at Buckingham Palace, before a two-night stay in Ireland.

Jeremy Corbyn addressed crowds of protesters from a stage in Whitehall during the second day of the president’s stay, while Mr Trump dismissed reports of demonstrations as ‘fake news’.

The protests, which saw the Donald Trump baby blimp and a 16ft talking robot of the president sitting on a gold toilet, failed to swell to the numbers seen the previous year. 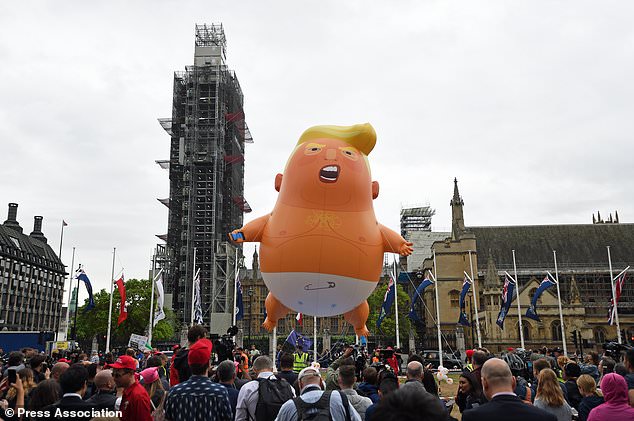 Before Mr Trump’s visit, a Met spokeswoman said: ‘A very experienced command team is preparing the multi-faceted policing and security operation for the president’s visit and whilst the Met has a responsibility to ensure the right to lawful protest this needs to be balanced with the complex requirements of this policing plan.’

The data released by the force shows more than 6,300 police officers were deployed across the three-days of Mr Trump’s UK visit, with the majority on the streets during his two days in London.

On June 3, the day the president flew into Stansted Airport aboard Air Force One, there were 2,714 police – of rank between police officer and deputy assistant commissioner – on duty, as well as 14 other police staff.

The following day, which saw the largest of the protests, some 3,249 police officers were on duty along with 30 other police staff, the figures show.

There were 411 officers deployed in London as Mr Trump attended a D-Day event in Portsmouth, some 306 were in place on June 2, as the force prepared for the president’s arrival, while just 38 were on duty on June 6 as he visited Ireland.

Hampshire police deployed their own officers during his visit to the commemoration event at Portsmouth Naval Museum but would not have the final figures until later in the year.

A Garda spokesman said the costs of Mr Trump’s trip to Ireland, where he stayed at his Doonbeg hotel and golf resort in Co Clare, had yet to be finalised.