She crowned Amber Gill and Greg O’ Shea the winners of 2019.

And was still recovering from an action-filled night of celebrations as she waited for a taxi outside Ibiza airport on Tuesday.

The television presenter, 39, cut a stylish figure in a flowing black mini dress that featured a plunging neckline and cinched as she waved goodbye to yet another series of the ITV2 show. 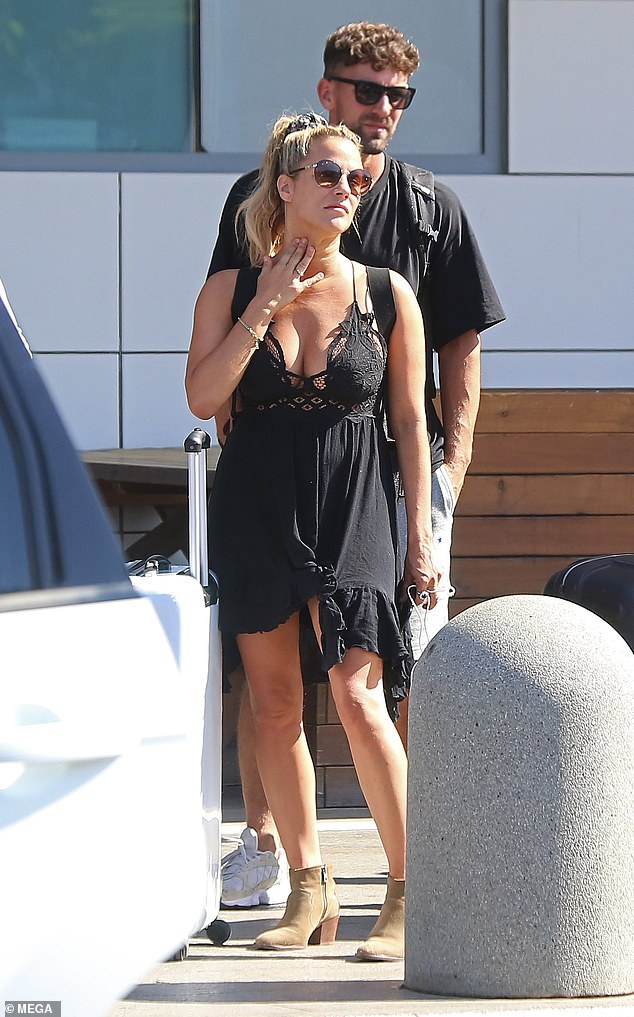 Stylish: Love Island host Caroline Flack was still recovering from an action-filled night of celebrations as she waited for a taxi outside Ibiza airport on Tuesday

Keep it chic like Caroline in a Free People dress

After a whirlwind eight weeks of romances, heartbreak and Caroline Flack’s flawless wardrobe, Love Island has sadly come to an end.

But fear not because The Flack is still giving us some much needed summer style inspiration as she jets back home.

Soaking up some last minute rays, the presenter kept her airport attire minimal in a Free People dress with her classic suede boots and sunnies to complete the look.

Think you’ve seen the dress before? Well, that’s because Caroline owns the yellow version too. But with the ‘Adella’ dress being designed with a lace crochet bralet, floaty skirt and tiered ruffle hem, it’s the perfect summer piece. So we don’t really blame her for snapping more than one!

It’s by the brand’s diffusion line, FP One, so it’s a little more affordable for us fans. If you fancy snapping it up just click the link…

Alternatively, shop our favourite look-a-like from Asos via the carousel below, where you can also bag yourself a bargain from Boohoo and Jarlo.

The Love Island host teamed her ensemble with a pair of beige suede ankle boots and a black rucksack as she stepped outside with a friend.

Sweeping her caramel locks into a tight ponytail, Caroline completed her look with a pair of swanky shades and a dainty silver bracelet.

Caroline’s appearance comes the morning after she gave fans a glimpse of the Love Island after-party on social media on Monday evening.

The presenter shared a picture of herself with the basketball player, Ovie Soko, 28, who came third alongside India Reynolds, also 28, and another of herself with runner-up Tommy Fury, 20. 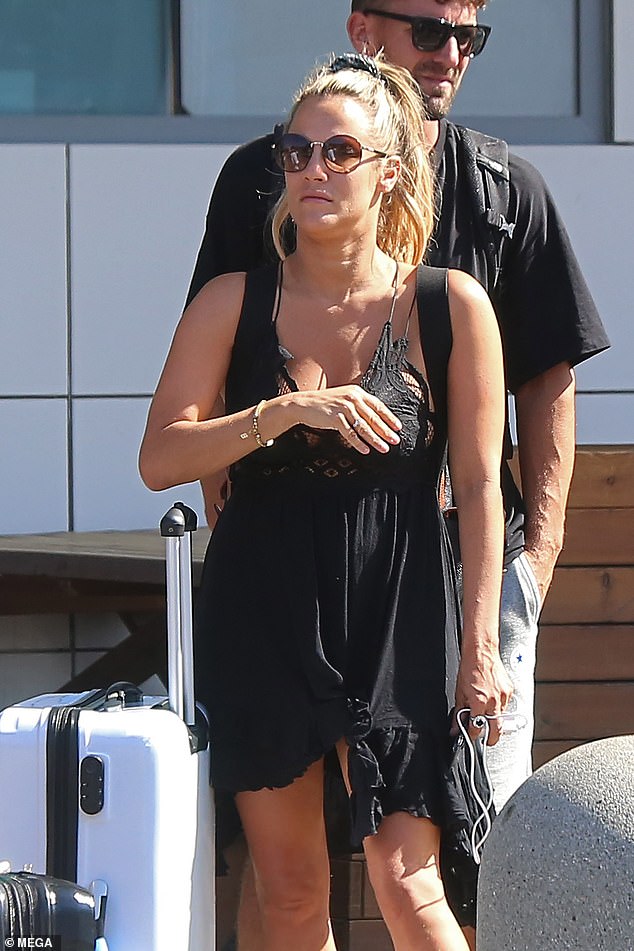 Radiant: The television presenter, 39, cut a stylish figure in a flowing black mini dress that featured a plunging neckline and cinched in at her svelte waist 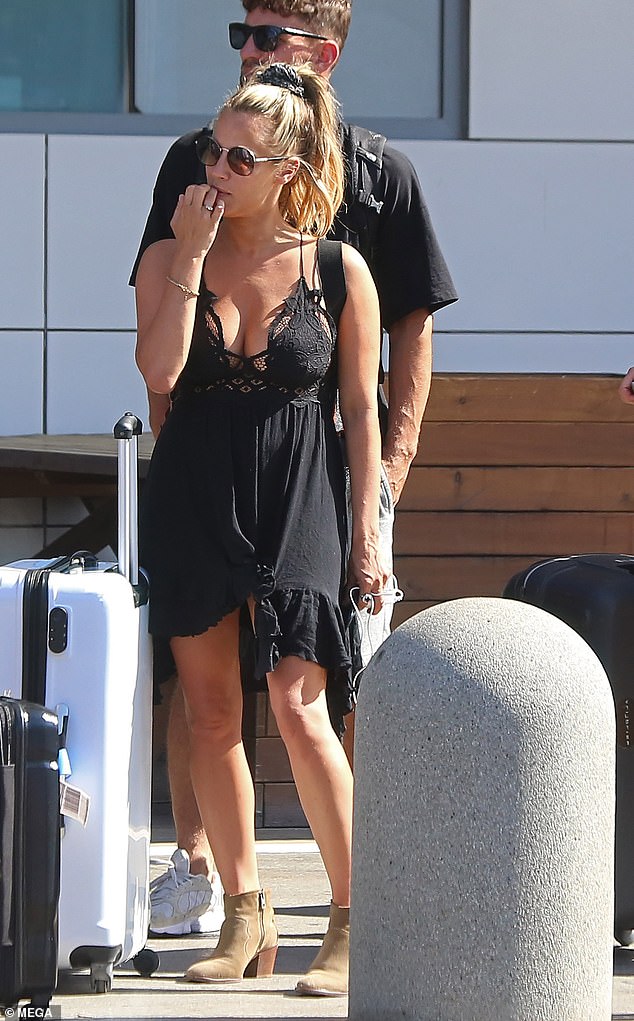 Down time: The Love Island host teamed her ensemble with a pair of beige suede ankle boots and a black rucksack as she stepped outside with a friend 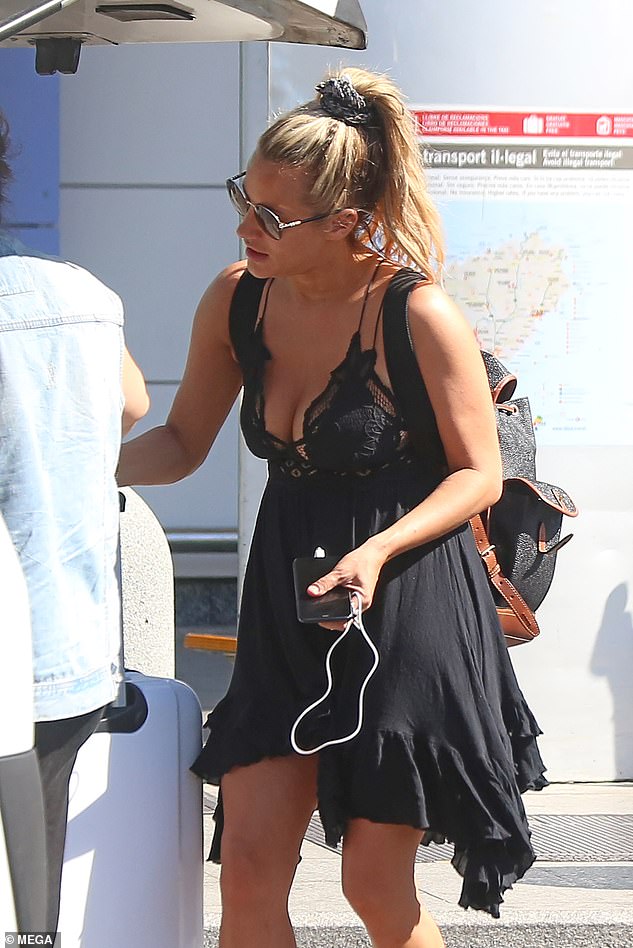 Basking: Sweeping her caramel locks into a tight ponytail, Caroline appeared calm and relaxed as she stepped outside

The dramatic finale saw Amber, 21, and Greg, 24, beat boxer Tommy and social media influencer Molly-Mae Hague to be crowned the king and queen of Love Island 2019.

The episode saw Curtis Pritchard and Maura Higgins arrive in fourth place and Ovie Soko and India Reynolds find themselves in third place.

During their interview with host Caroline Flack the winning couple, who split their £50,000 prize money, expressed their shock at the incredible win.

Amber said: ‘I don’t know how we’ve done it. It’s wild. It’s been a rollercoaster of emotion. Absolutely mad. I had that period of time that was just awful and I thought it was over for [me] then. Then [Greg] came in.’ 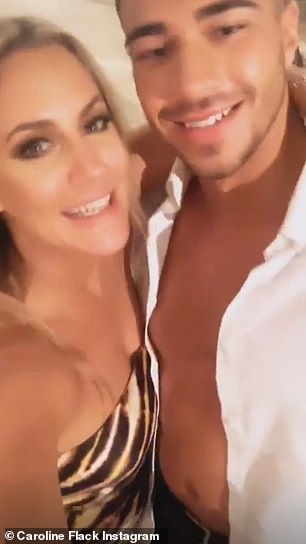 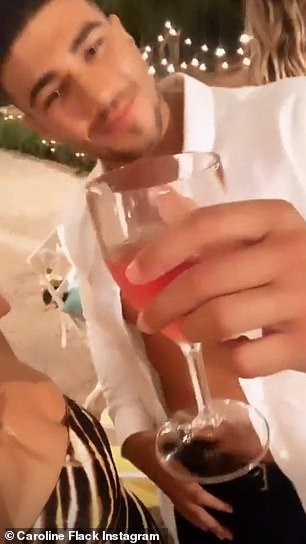 It’s a wrap: Caroline and Tommy appeared in high spirits as they celebrated the night

Addressing her previous romance with ex-Islander Michael, who ditched Amber for Joanna, the beautician added: ‘I was definitely prepared to stay with Michael. We had a great friendship. But I knew when I looked him up and down that he was going to ruin my life.

‘It was horrible [when Michael paired up with Joanna]. I had a sneaky feeling but I was hoping that he wouldn’t do it. [Greg] is just lovely. He’s got nice energy. I like being around him all the time.’

Greg said of Amber: ‘I knew she was the one because she was funny and because of her confidence. My parents raised me to have good morals and good principals. It’s nice to treat women with respect.’

Earlier this year it was revealed that Caroline – who has fronted the revived ITV2 dating show since its launch in 2015 – will travel between the UK and South Africa for a new winter edition of the the series, which is expected to last for six weeks. 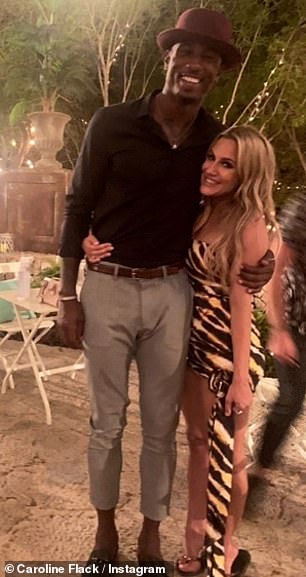 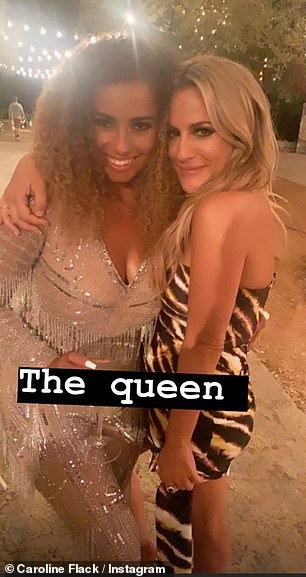 The stars of the show: Caroline posed for a cosy snap with Ovie Soko (left) and winner Amber (right) 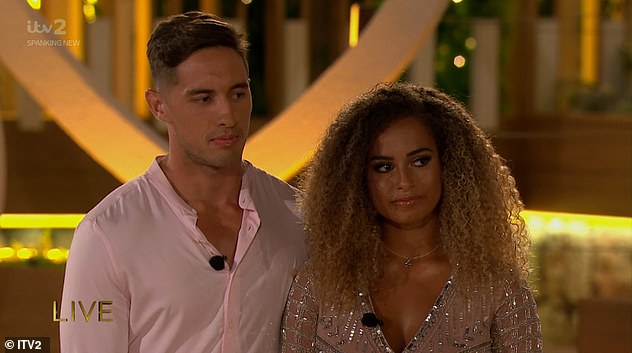 The winners: Amber Gill, 21, and Greg O’Shea, 24, beat boxer Tommy Fury and social media influencer Molly-Mae Hague to be crowned the king and queen of the villa