The ‘s interview with for her upcoming Vogue issue has been revealed.

Meghan’s chat with the former First Lady of the US took place over a ‘casual lunch of chicken tacos and my ever-burgeoning bump’.

In the full transcript of the interview, published on the  website, Meghan and Michelle discuss issues such as motherhood and the Girls Opportunity Alliance – an educational charity founded by Mrs Obama.

‘You sent me the kindest message on Mother’s Day this year. What has motherhood taught you?’ Meghan began by asking.

‘Being a mother has been a masterclass in letting go.’ Michelle responded.

‘Motherhood has taught me that, most of the time, my job is to give them the space to explore and develop into the people they want to be,’ she went on to say.

The Duchess then asked what advice Mrs Obama gives to her daughters.

‘Don’t just check the boxes you think you’re supposed to check, like I did when I was their age,’ Michelle said.

‘I tell them that I hope they’ll keep trying on new experiences until they find what feels right. And what felt right yesterday might not necessarily feel right today.’ 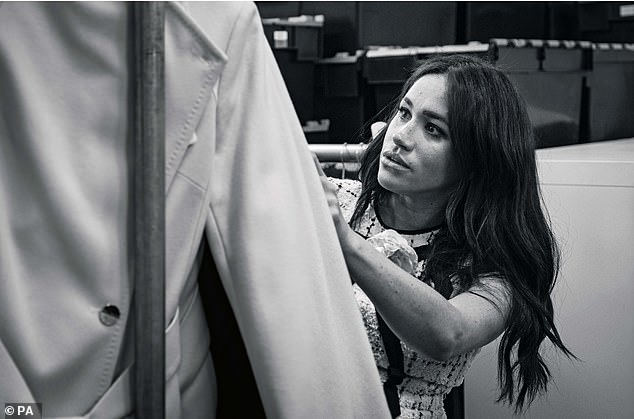 Veteran Utah firefighter and father, 42, dies after being injured in California wildfire
Police appeal for owner of lost purse 31 YEARS after it went missing
Denmark defeat a 'learning curve' for Wales, says Ryan Giggs
Woman who was asked to pay £180 to secure place at sister-in-law's wedding asks - what would YOU do?
Pictured: Five-year-old British boy who drowned in a pool in Kos
Ed Sheeran helps teenager's dream come true by wearing her charity bracelet onstage
Boris Johnson is seated next to Prince Andrew at Remembrance Festival
I have insurance': Rudy Giuliani warns Trump against throwing him 'under the bus'