Nancy Pelosi denied on Friday there was any hatchet to bury with  after the two met face-to-face, talking one-on-one for the first time in months.

Pelosi down played any reports of tension, saying the two women don’t have ‘that many differences,’ as the New York congresswoman slipped out of the speaker’s office and avoided reporters.

‘I don’t think we have that many differences,’ Pelosi told reporters on Capitol Hill afterward.

She also said there was no hatchet to bury.

‘I don’t think there was ever any hatchet,’ the speaker said.

‘I would never even say that it was a hatchet. But I do think that we sit down today. We had a good meeting. And the congresswoman is a very gracious member of Congress, so we had a very positive conversation about our districts and how we represent our country,’ she added. ‘In a family you have your differences. But you’re still family.’

Pelosi also argued given the issues the country is facing ‘these personality issues and the rest – they are minor.’

Later in the day, Ocasio-Cortez told reporters on Capitol Hill: ‘It was a positive meeting.’

She said the speaker ‘absolutely’ respected her opinions and she was ‘looking forward to us continuing our work.’ 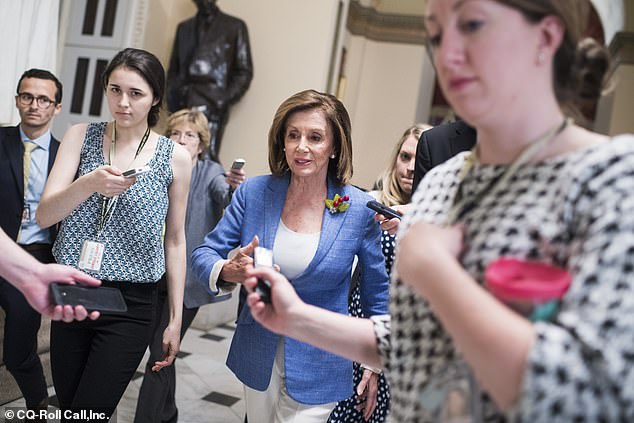 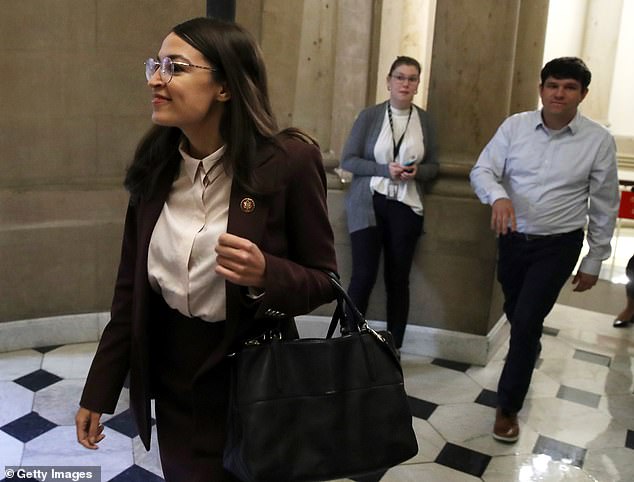 Representative Alexandria Ocasio-Cortez arrives for her meeting with Speaker Pelosi 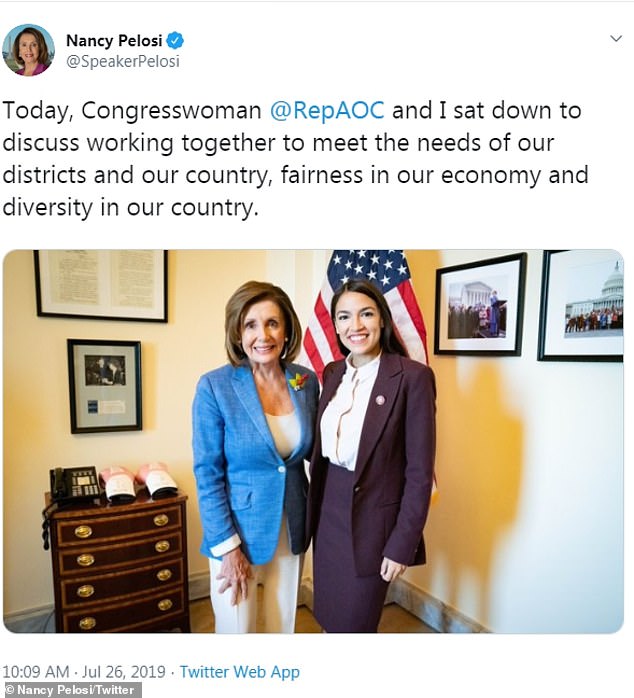 The meeting, which took place in the speaker’s ornate office on Capitol Hill over looking the National Mall, lasted about 30 minutes.

‘I have meetings with members all the time,’ she added. ‘We covered a range of issues in our conversation particular to the congresswoman’s committees.’

Pelosi’s office also tweeted a picture from the sit-down with the two women grinning broadly, arms around one another.

‘Today, Congresswoman @RepAOC and I sat down to discuss working together to meet the needs of our districts and our country, fairness in our economy and diversity in our country,’ Pelosi wrote on the post.

Before Friday, the two women haven’t spoken one-on-one in months.

Neither got into specifics as to what they discussed but Pelosi did say they did not talk about Ocasio-Cortez’s accusation that the speaker was singling out ‘newly elected women of color.’

Their pow-wow comes after Pelosi was not persuaded to launch impeachment hearings against the president after Robert Mueller’s testimony on Capitol Hill Wednesday fell flat.

‘My position has always been: whatever decision we make in that regard would have to be done with our strongest possible hand, and we still have some outstanding matters in the courts,’ she said at a press conference in the Capitol after the former special counsel wrapped. 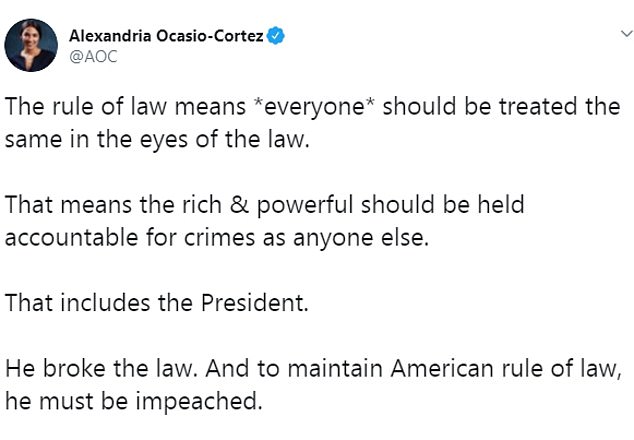 Ocasio-Cortez was an early voice calling for Trump to be impeached.

She echoed that call in the wake of Mueller’s testimony.

‘The rule of law means *everyone* should be treated the same in the eyes of the law. That means the rich & powerful should be held accountable for crimes as anyone else. That includes the President. He broke the law. And to maintain American rule of law, he must be impeached,’ she tweeted on Wednesday after Muller finished testifying.

Reports have been rife this month about tension between Pelosi, a long time powerhouse on Capitol Hill, and members of the ‘squad’ – Ocasio-Cortez, Ilham Omar, Rashid Tlaib, and Ayanna Pressley – four young lawmakers with large social media followings that gives them a different kind of political power.

No word on what was on the agenda between the two women but there were plenty of topics for them o talk about ranging from Ocasio-Cortez’s liberal policy goals to President Trump’s comments on the ‘squad’ to the New York Democrat’s social media habits.

In addition to the political battles of the last week, the two have differences on serious policy issues. Ocasio-Cortez has pushed a Green New Deal estimated to cost $3.9 trillion.

Ocasio-Cortez’s staff has also been an issue Pelosi made it clear earlier this month she was not happy the congresswoman’s chief of staff tweeted criticism at Democratic lawmakers.

The culture on Capitol Hill is an environment where unelected aides take a back seat role and don’t take the spotlight away from lawmakers. 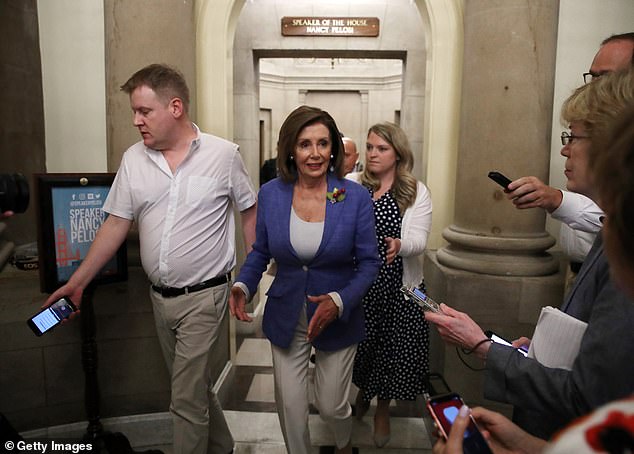 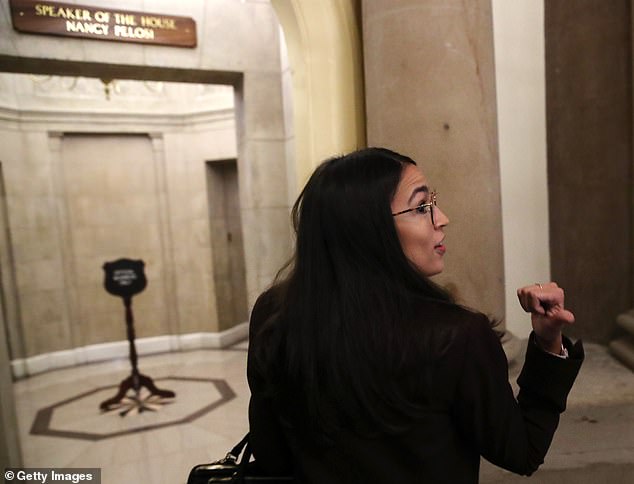 Ocasio-Cortez avoided reporters after the meeting 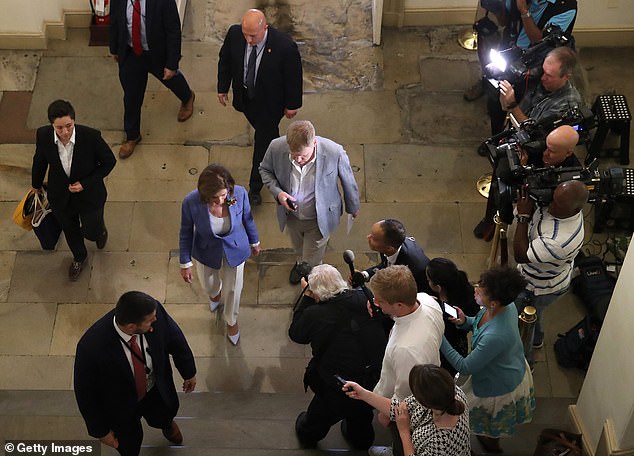 But Saikat Chakrabarti, Ocasio-Cortez’s chief of staff, attacked Pelosi and other Democrats in a June tweet, criticizing the Blue Dog Democrats and New Democrats – as the more moderate members of the party are known.

Chakrabarti referred to them as ‘New Southern Democrats,’ which is seen as a code word for segregationists.

‘Instead of ‘fiscally conservative but socially liberal,’ let’s call the New Democrats and Blue Dog Caucus the ‘New Southern Democrats.’ They certainly seem hell bent to do to black and brown people today what the old Southern Democrats did the 40s,’ he wrote on Saturday.

‘I deleted the tweet since, yeah, I’m mad. But I do think if we don’t have progress on racial justice it will be because of the new Dems and blue dogs. Just like in 1940,’ he later wrote.

Pelosi dressed down lawmakers about their social media habits in a closed-door meeting on Capitol Hill.

‘You got a complaint? You come and talk to me about it. But do not tweet about our members and expect us to think that that is just ok,’ Pelosi said during the meeting, according to a source in the room, which was interpreted as a remark about Chakrabarti’s tweet. 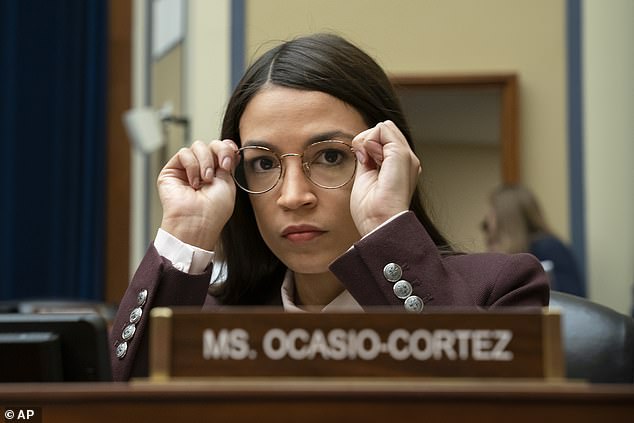 Ocasio-Cortez has been critical of the speaker 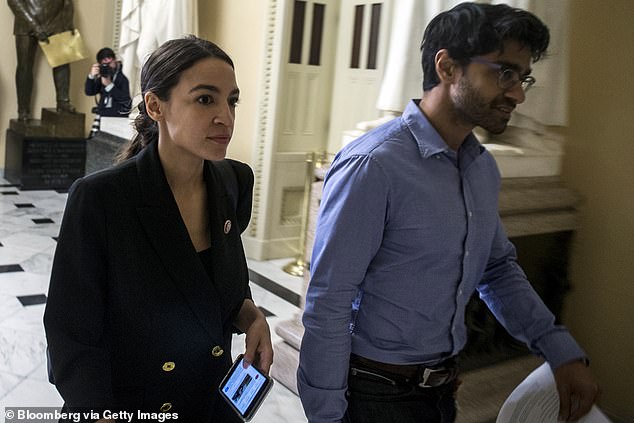 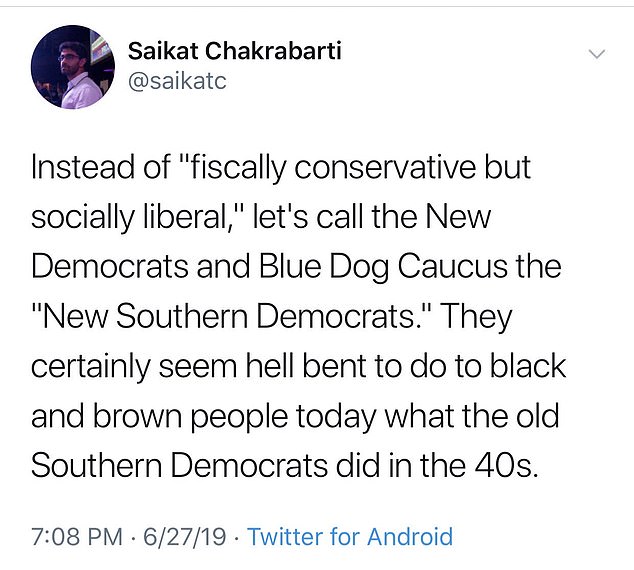 Saikat Chakrabarti deleted this tweet, which many members of Congress found offensive

Pelosi said she was doing her job as leader of the party.

‘They took offense because I addressed, at the request of my members, an offensive tweet that came out of one of the member’s offices that referenced our Blue Dogs and our New Dems essentially as segregationists. Our members took offense at that. I addressed that. How they’re interpreting and carrying it to another place is up to them. But I’m not going to be discussing it any further,’ she told reporters afterward.

In an interview with The New Yorker in early July, Ocasio-Cortez revealed she hasn’t spoken to Pelosi in months and suggested she was given a series of major committee assignments in an attempt to keep her busy.

‘I think sometimes people think that we have a relationship,’ she told The New Yorker Radio Hour.

When asked whether they did, the Democratic congresswoman said: ‘Not particularly – not one that I think is distinguished from anyone else.’

Ocasio-Cortez admitted she hasn’t spoken to the speaker one-on-one in months.

‘The last time I kind of spoke to her one on one was when she asked me to join the Select Committee on Climate Change,’ she said.

Pelosi announced the members of that committee in February – six months ago.

‘I was assigned to some of the busiest committees and four subcommittees. So my hands are full. And sometimes I wonder if they’re trying to keep me busy,’ Ocasio-Cortez added.

The New York lawmaker was assigned to the House Financial Services Committee and the House Committee on Oversight and Reform – both panels are investigating President Trump. 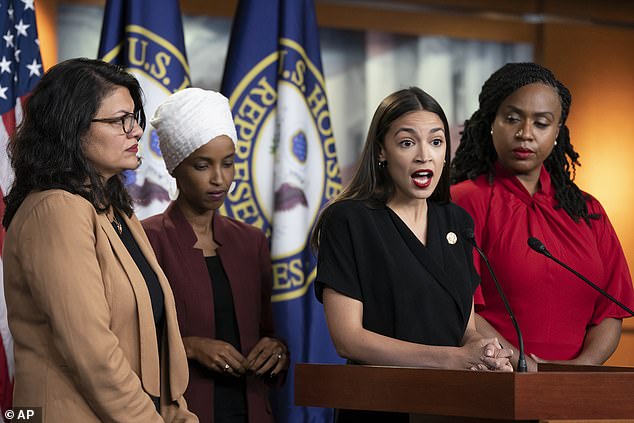 Pelosi had been in a feud with members of ‘the squad’: Representatives Rashida Tlaib, Ilhan Omar, Alexandria Ocasio-Cortez and Ayanna Pressley 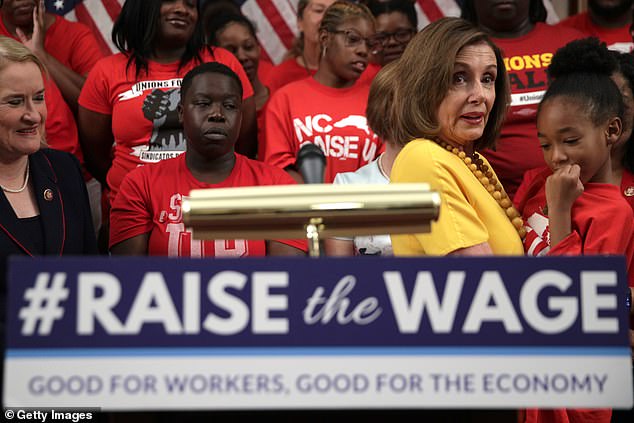 There have been weeks of tension between Speaker Pelosi and Rep. Ocasio-Cortez

She also appeared to take a swipe at Pelosi during that interview, claiming that power in the nation’s capital has become too concentrated.

‘We don’t know how to talk about our own issues in ways that I think are convincing … we’re too often on the defense. We’re too often afraid of our own values and sticking up for them. And I feel like we run away from our convictions too much,’ she said.

‘The rules of Congress have changed over the years to put, I think, an insane amount of power in a handful of people — within even just the House of Representatives itself. The Speaker, [party] leadership, committee chairs … over the years the rules have changed to kind of consolidate power to a very large degree.’

Pelosi and the ‘squad’ were in a feud earlier this month when the four of them voted against a $4.6 billion border bill, where $3 billion of that would provide funding for humanitarian aid at the U.S.-Mexican border.

The version of the bill that ended up passing the House last month was the Republican-version, after the Democrat version was rejected in the Senate.

The speaker dismissed them as just ‘four votes.’

Much was made of the battle, with White House counselor Kellyanne Conway stroking the flames by calling it a ‘catfight.’

But compounding the problem were comments Ocasio-Cortez made to , where she accused Pelosi ofrepeatedly singling out ‘newly elected women of color’ and called the speaker ‘outright disrespectful’.

‘When these comments first started, I kind of thought that she was keeping the progressive flank at more of an arm’s distance in order to protect more moderate members, which I understood,’ Ocasio-Cortez said of Pelosi’s criticism.

‘But the persistent singling out … it got to a point where it was just outright disrespectful … the explicit singling out of newly elected women of color,’ she continued. 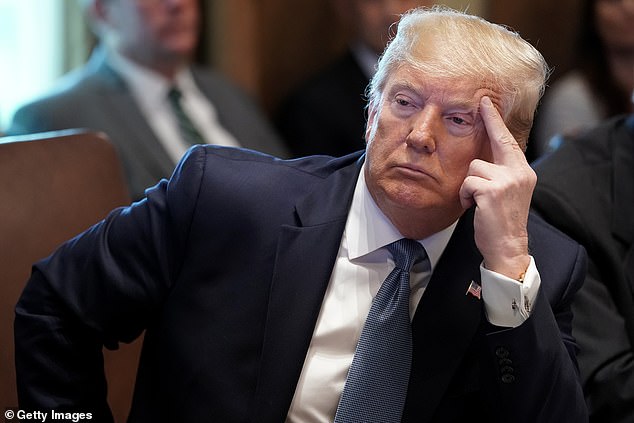 But Ocasio-Cortez told CBS News she did not say Pelosi was disrespectful to women of color.

‘I’ll clarify it. I did not say she was disrespectful to women of color. I found some of the comments disrespectful, and that was my personal opinion, and I did feel that singling out on the basis of one vote was creating an opening, but that doesn’t mean that we fundamentally disagree or fundamentally disrespect each other’s position and power and ability to be here and that’s what makes us united as a caucus,’ she said.

Pelosi defended the ‘squad’ after Trump tweeted on Sunday that they should ‘go back where they came from’ if they were unhappy.

His weighing in on the feud seemed to bring the speaker and the ‘squad’ closer together.

Pelosi supported a resolution condemning Trump’s tweets about the lawmakers and even caused a controversy on the House floor when she called the president a ‘racist’ during her speech on the measure.

The members of the ‘squad’ said there was no fracture between them and the speaker.

‘I don’t,’ Ocasio-Cortez agreed. ‘I feel that just as there were members of Congress that did not vote for the speaker on the House floor the day of our swearing-in, just as there are members who challenge her conclusions, who disagree with her, so do we from time to time. But that does not mean that there’s a fundamental fracture or a dehumanizing going on within our caucus.’

Forklift driver causes warehouse to fall when he nudges shelving unit
Elderly couple, 85 and 89, killed when their luxury Manhattan apartment bursts into flames
Ocasio-Cortez says it's 'legitimate' for people to ask to have kids because of climate change
Law firm Willkie places co-chairman on leave after college fraud bust
Remains in storage facility IS missing mom as estranged husband and girlfriend face murder charges
The moment a diver furiously tries to escape from a shark before being bitten on the leg
Breaking News: New Jersey man arrested on terror charges after 'plotting to bomb Trump Tower'
Cardi B arrives back in court as she pleads not guilty over a strip club brawl