has test-fired a ballistic missile amid sky-high tensions around the Persian Gulf.

The Sahab-3 missile was fired Wednesday from southern Iran and flew for 680miles before landing east of Tehran, without straying outside of Iranian territory.

American military officials said they had been monitoring the launch site ahead of the test, and that at no time did the missile pose a threat to US shipping or bases. 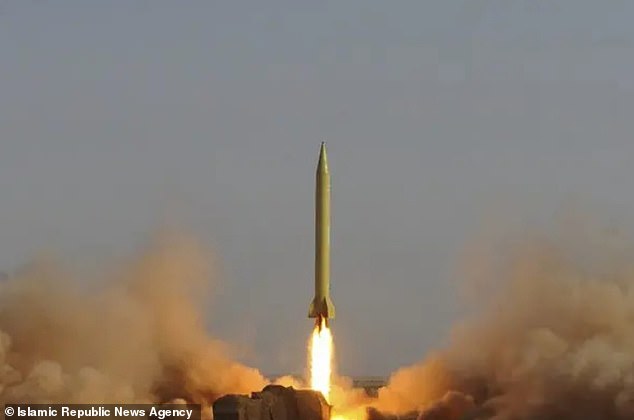 Iran test-fired a Sahab-3 ballistic missile on Wednesday, which was fired from the south of the country and travelled 680 miles before landing east of Tehran (file)

The test was designed to improve the ‘range and accuracy’ of Iran’s ballistic missiles.

Sahab-3 is not a new missile design, and has been operational within the Iranian arsenal since 2003.

It is based on a North Korean design – the Nodong-1 – and variants of the basic missile can travel up to 1,200 miles.

While that is not enough to reach western Europe, it does put most of the Middle East – including Israel – within striking distance.

Experts believe the Sahab-3 is capable of carrying a nuclear warhead.

Is pet-hating killer deliberately planting contaminated chicken pieces in Wimbledon?
Ordnance Survey launch a solar-powered drone that can fly for 90 days at a time
Fascinating photos reveal what life was really like in Glasgow and Edinburgh during the 50s and 60s
Man accused of scamming £47,000 by claiming to be a survivor of the Grenfell fire
TSUNAMI warning after 6.8 earthquake strikes off of Indonesia
Alabama Senate bans nearly all abortions, including...
Story of a couple who don't have their favorite side divides opinion online
Iran president issues chilling warning to the west as he shows off nation's military might