A cottage which has been at the centre of a 10-year legal battle has been razed to the ground by a council because it was built without planning permission.

Jim Bradwell, 71, refused to give an inch against planners and was behind bars when the bulldozers rolled in to flatten his home.

The retired builder first applied for planning permission for his bungalow in the hamlet of Evenwood Gate, near Bishop Auckland, County Durham in 2007, but was denied permission because planners said it was on a greenfield land.

Despite the refusal, he built what he called Newmoor Yard Cottage and has since refused orders to demolish it ever since, vowing to go to prison rather than give in. 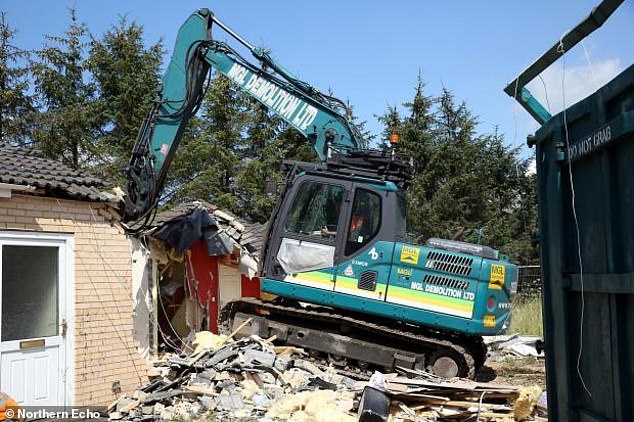 While homeowner Jim Bradwell was in prison after his dispute with the council, they rolled in with bulldozers and tore his home down 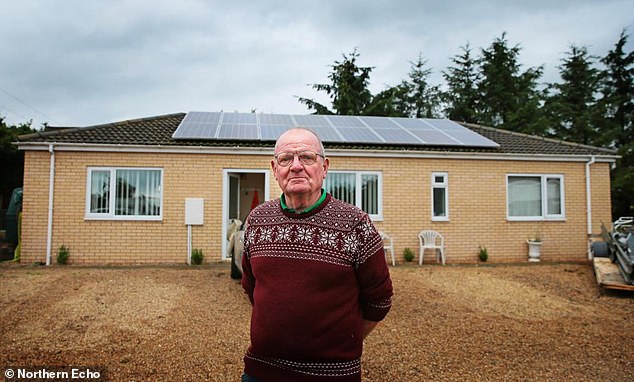 Mr Bradwell, 71, (pictured outside his home he built) was denied planning permission for the abode in 2007, but built it anyway

And that’s exactly where he was when the bungalow was demolished by Durham County Council heavy machinery on Wednesday.

Timeline of the homeowner’s ten-year battle with the council

June 13, 2007 – The council rejects the application, saying it was on a greenfield site. Mr Bradwell appeals to the Planning Inspectorate.

September 2008 – Mr Bradwell ignored the refused application and built his home anyway, so the council began enforcement procedures against him and ordered him to tear it down. He appealed to the High Court.

March 18, 2010 – The High Court ruled he had no grounds for appeal and his home had to be demolished in eight weeks, but he continued his fight by appealing to the

December 2015 – Mr Bradwell appeared at Teesside Crown Court, where he pleaded guilty to failing to comply with the enforcement order to take down the house.

February 2016 – Mr Bradwell takes part in a one man protest outside the council, claiming they have ‘lied.’

July 2017 –  He attends the High Court in Leeds and is told by a judge the house must be demolished. Mr Bradwell claims if he doesn’t knock the house down he could go to prison.

July 2019 – A six-month prison sentence, which was suspended on the basis that he complied with an enforcement notice on the site, was activated at a High Court hearing in Leeds, and Mr Bradwell goes to jail. Later in the same month the council destroys his home

A six-month prison sentence, which was suspended on the basis that he complied with an enforcement notice on the site, was activated at a High Court hearing in Leeds.

Mr Bradwell has in the past lodged a one man protest outside Durham County Hall to draw attention to what he has always claimed to be a gross injustice.

Stuart Timmiss, Durham County Council’s head of development and housing, said: ‘We have tried incredibly hard to work with Mr Bradwell and avoid taking the action we have taken today.

‘It’s not a decision we have taken lightly but we have considered a number of factors, including the knowledge that Mr Bradwell has been rehoused nearby.

‘This has been an incredibly lengthy process and we feel today’s action is the only way to bring this matter to a close.

‘Mr Bradwell began construction on the bungalow before a planning application was determined.

‘In April 2007, he was refused planning permission by Teesdale District Council.

‘Despite that, he continued to work on the property regardless and enforcement action began in September 2008.

‘The original decision to refuse permissions was subsequently upheld by the Planning Inspectorate and the High Court.

‘Since then, Mr Bradwell has made a number of legal challenges against the decision and on each occasion our position has been upheld by the courts.

‘Furthermore, Mr Bradwell has previously pleaded guilty to failing to comply with the enforcement notice and has received a fine from the court.

‘We have met with Mr Bradwell face to face a number of times to discuss his situation and, at one stage we even offered him an extension on the time he had to comply with the enforcement notice.

‘However, failure to comply with a court order requiring compliance with an enforcement notice is a serious matter and people simply cannot be allowed to build houses with disregard for the need for planning permission and the view of the court.’

Mr Bradwell’s bungalow does not appear to have upset his neighbours.

In July 2017 Mr Bradwell defended his actions in the local paper, the Northern Echo.

He said: ‘I went down to the High Court in Leeds and was told it had to be demolished by Wednesday but I haven’t and the judge told me his hands were tied and that he cannot question the council.

‘With the deadline passed I will go to jail for two years but how can you put a man in jail when they are not giving me a chance to say my side of the story?

‘It has cost me quite a bit but it’s not cost me as much as the council I imagine, especially as they’re so strapped for cash at the minute.

‘It’s a waste of time to comply with unless they let me question the 2007 decision which they have never let me do as my human right.

‘Unless they go back and talk about that application change from a brownfield to a greenfield site I won’t comply and if I have to go to jail for two years then I will.’