Nadia Sawalha has revealed she feels ‘stronger and happier than ever’ after posting a video of her shaking her ‘cellulite’.

The Loose Women star, 54, originally shared the clip in May to inspire her daughters Maddy, 16, and Kiki, 11, after years of battling her own body insecurities.

In the video, Nadia proudly shook her curvy pins and wrote in a lengthy caption that she no longer felt any ‘shame’ about her body. 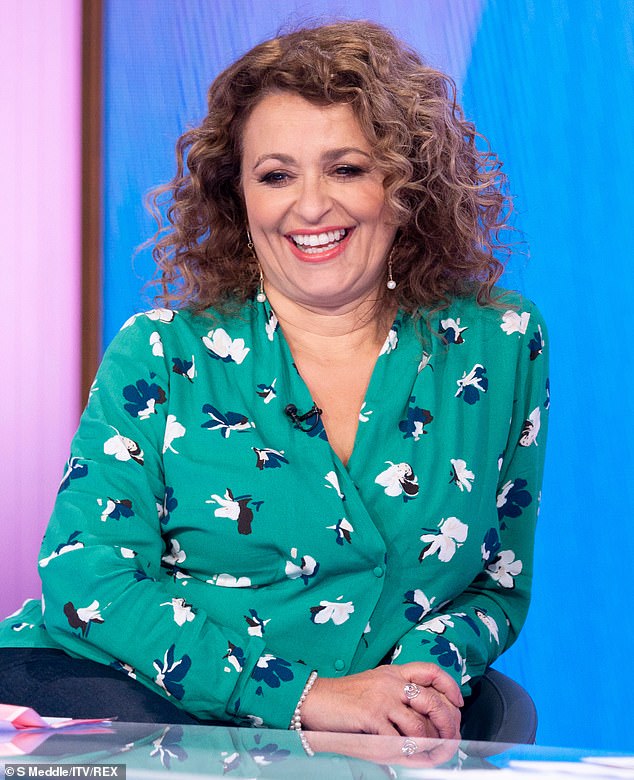 Confident: Nadia Sawalha has revealed she feels ‘stronger and happier than ever’ after posting a video of her shaking her ‘cellulite’

Nadia told the that she’s never felt better since she openly embraced her figure, saying she felt compelled to share the video to help normalise cellulite for other women.

The star said: ‘Posting that video on Instagram was perhaps the most courageous thing I’ve ever done. And yes, my daughters were proud of me.’

Nadia then admitted it has taken years to embrace her body after battling with insecurities, which escalated in her 40s when she gained four stone after giving birth to daughter Kiki. 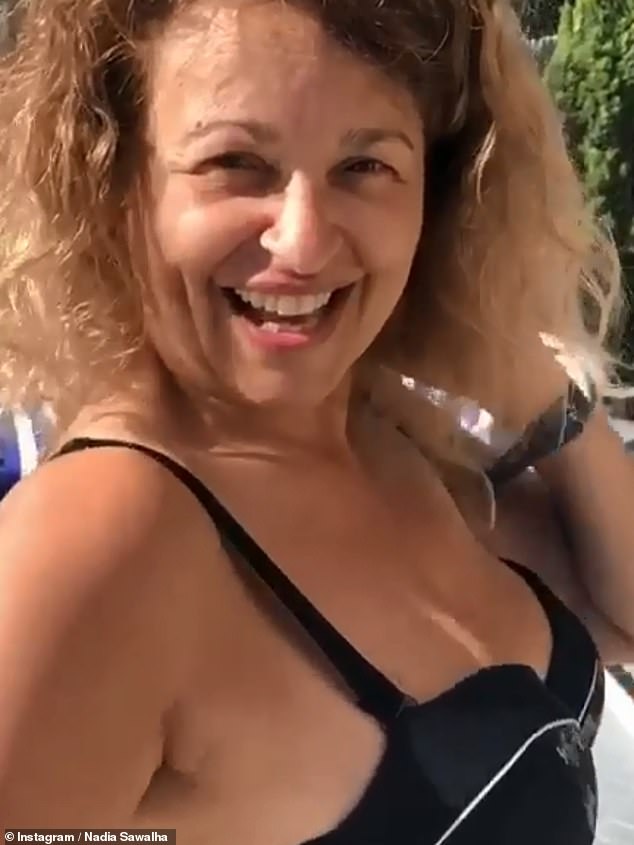 Defiant: In May the Loose Women star took to Instagram to share a video of her shaking the ‘cellulite’ on her legs, and has since said it was ‘the most courageous thing she’s ever done’ 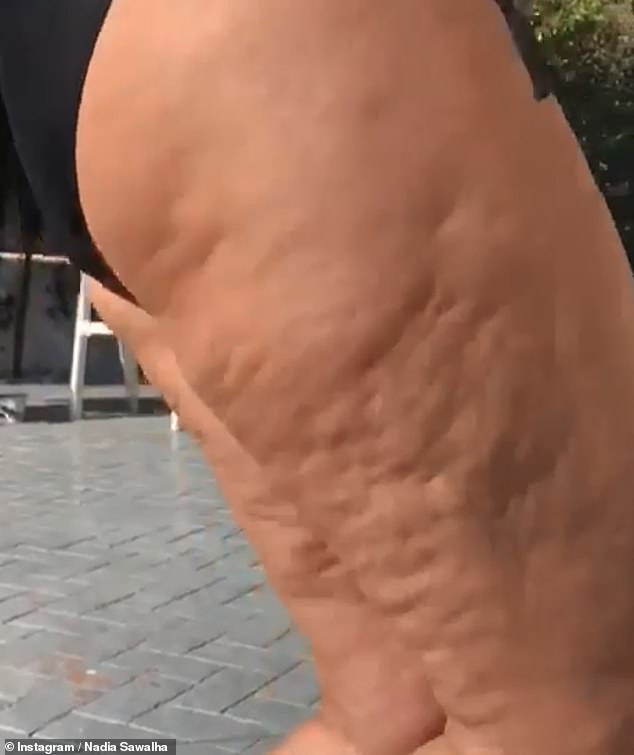 Inspiring: Nadia also said she sought therapy after battling with body insecurities for years, but now feels utterly happy with her figure

Despite eventually slimming down to a size 10, the mother-of-two said she still wasn’t happy, adding: ‘I realised I wasn’t happy, so had therapy. I didn’t want my kids to feel the same way about their own bodies as I’d been made to feel about mine.’

And with her amazing new body confidence, Nadia also revealed she hasn’t completely rejected the idea of posing nude. 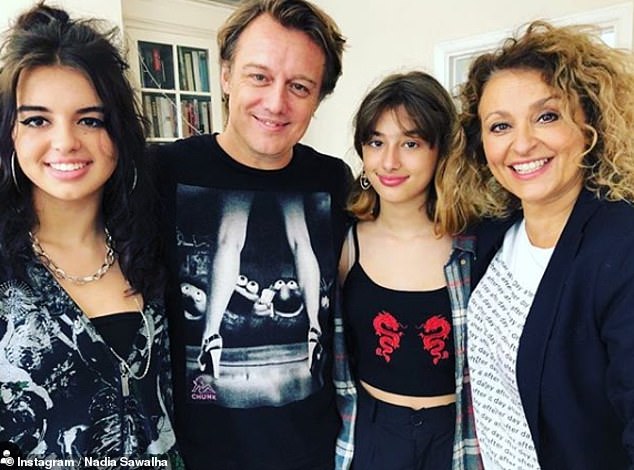 Close: The star also said she made her daughters Maddy, 16, (seen above far left) and Kiki, 11, proud with the post

Nadia’s revelations came after she took to Instagram earlier this year to post a video of her proudly shaking her ‘cellulite’.

In a lengthy caption the star admitted she had struggled with body insecurities, and it took the words of her daughter Maddy to finally push her to embrace her figure.

She said: ‘I’m not going to lie I almost didn’t post (got in a right old pickle about it !) this but it was my daughter @maddiemaddieee saying ”’mum I don’t see what’s wrong with cellulite” with such innocence that gave me my wake up call !!

‘No more shame. Done. Signora Cellulita I’m going to be kinder to you you’re just part of me !! B****y hell it took me long enough?!’ 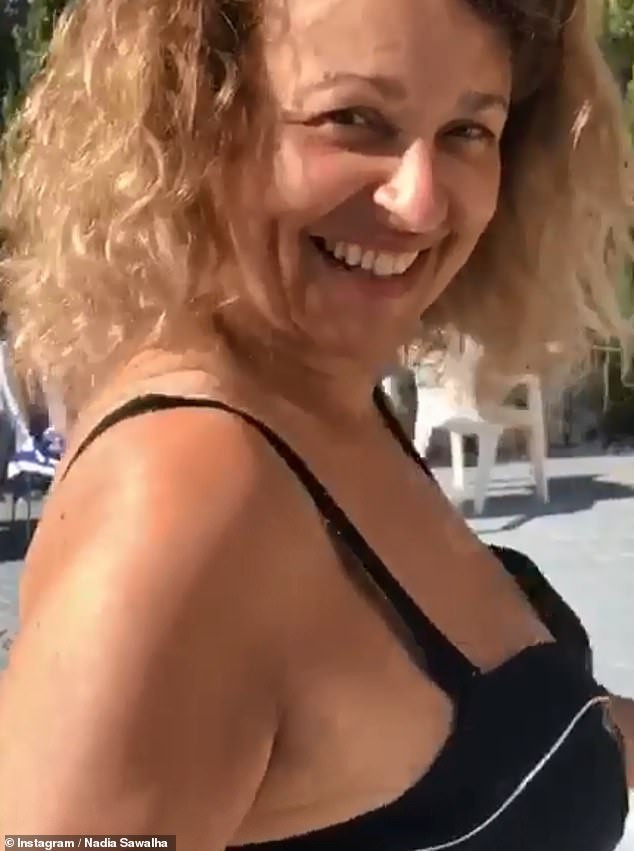 You look great! In her post Nadia also said she finally decided to embrace her body after years of battling insecurities

Jesy Nelson stuns in plunging pink suit as she joins Little Mix bandmates at the MTV EMAs
MAFS 'experts' horrified as Dino Hira gifts them with 'a wine bottle opener in a kangaroo scrotum'
The Voice UK: Nicole Scherzinger and James Arthur join as guest mentors
Stephen Mulhern reveals his GENDER was the reason he didn't replace Ant McPartlin on I'm A Celeb
Taylor Swift dances and lip-syncs to her own song while celebrating her 10 VMA nominations
Larry David, Debra Messing, Billy Porter and more will star in Mueller Report stage show
Chanelle Hayes showcases her incredible figure in a patterned, cut-out swimsuit in Tenerife
Love Island's Wes Nelson lifts weights with Josh Denzel in Primrose Hill during lockdown after split