He was fined £86,000 after pleading guilty to drink-driving last year alongside a 20-month driving ban which was reduced to 15 months after he completed a drink-driving referral course.

And Ant McPartlin is taking full advantage of being able to get behind the wheel again as he was spotted hopping into his Range Rover for a drive to pick up a newspaper on Sunday morning.

The TV presenter, 43, was joined by his girlfriend Anne-Marie Corbett, 42, who slid into the passenger seat for the journey. 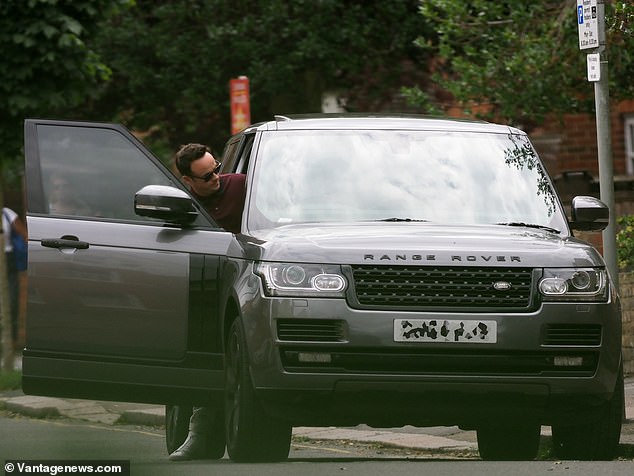 In the driving seat: Ant McPartlin, 43, was spotted hopping into his Range Rover for a drive to pick up a newspaper on Sunday morning

Ant put on a relaxed display for his day of rest in a maroon coloured polo shirt teamed with beige chinos and shaded his eyes with dark sunglasses.

His former PA styled up a black midi-dress printed with a floral design with flip-flops as the couple made the short journey to collect the reading material.

Also joining the pair was another female companion, who sat in the back of the luxury vehicle. 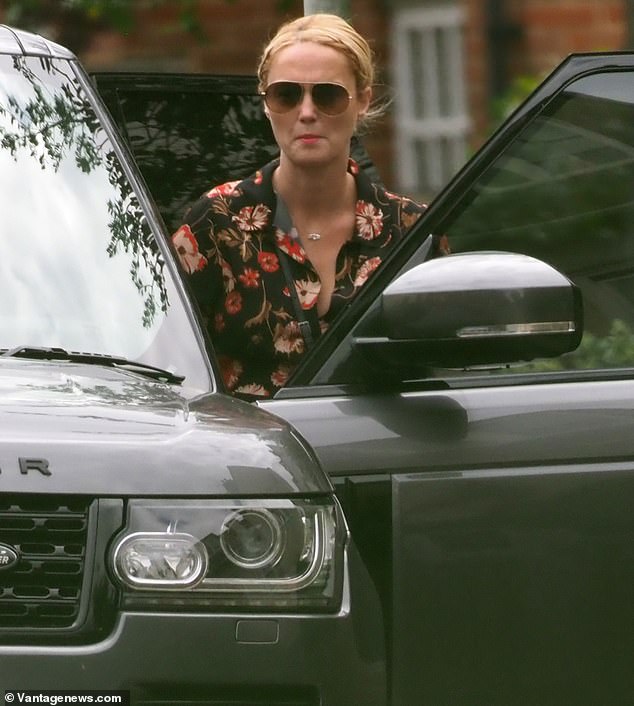 Passenger: The TV presenter was joined by his girlfriend Anne-Marie Corbett, 42, who slid into the passengers seat for the journey

Last year, McPartlin told police he was ‘ashamed and mortified’ after crashing his car while drink-driving with his mother in the passenger seat.

His new licence was issued this week, MailOnline understands.

His £86,000 fine eclipsed the £54,000 imposed on footballer Yaya Toure for the same offence in 2016, reported at the time to be the biggest sanction of its kind in the UK.

The 20-month ban always had the option of a five-month reduction if Ant completed the referral programme, which he has now completed. 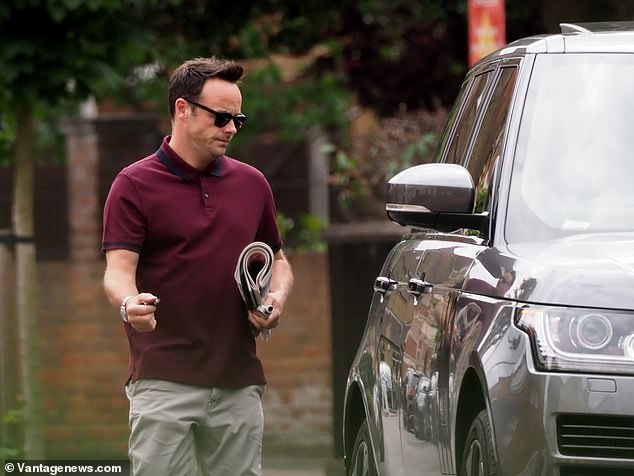 Sunday attire: Ant put on a relaxed display for his day of rest in a maroon coloured polo shirt teamed with beige chinos and shaded his eyes with dark sunglasses 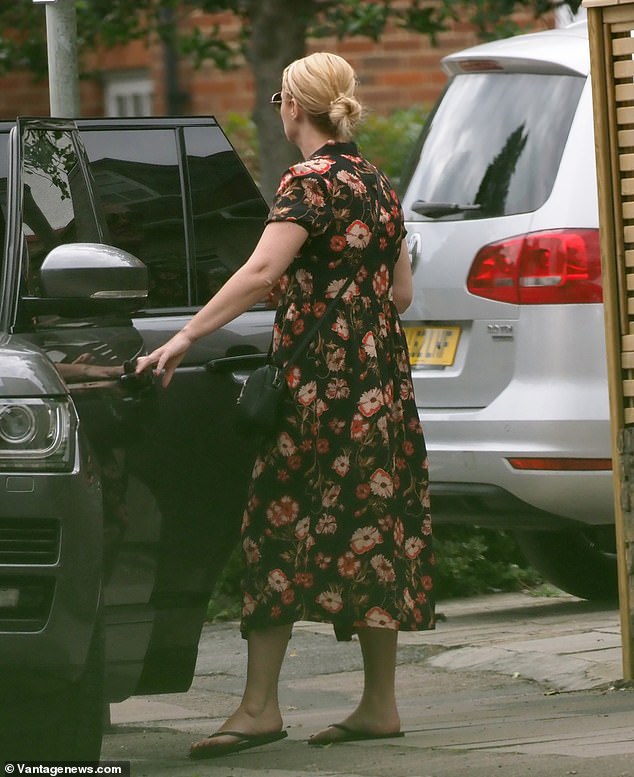 Summer style: His former PA styled up a black midi-dress printed with a floral design with flip-flops as the couple made the short journey to collect the reading material

Friends of the TV star said he had completed a course that was available to anyone, and had not received any special treatment.

Wimbledon Magistrates’ Court heard that McPartlin had been seeking help for ‘alcohol and emotional issues’ at the time of the crash in Richmond, west London, on March 18, having recently split from his partner of 11 years.

He and his wife Lisa had confirmed they were splitting last January and were granted a divorce in October 2018. 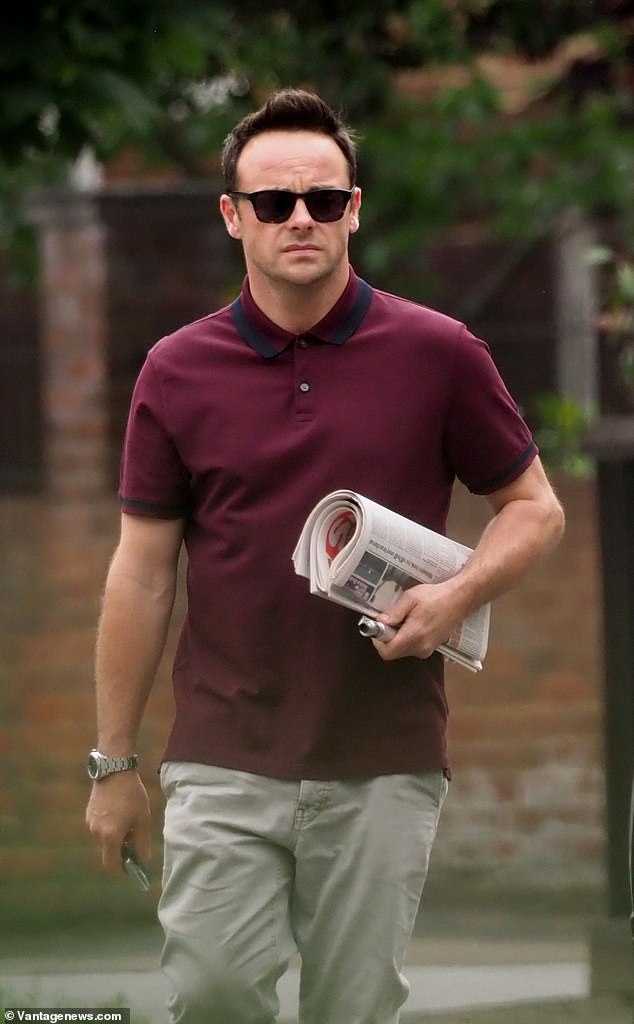 Reading materials: Ant strolled along with the newspaper under his arm following the short outing

The I’m a Celeb host and his teenage sweetheart had married in 2006.

They first met in Newcastle in 1994 before exchanging vows at a stunning country house in Buckinghamshire, in 2006.

Court documents alleged that McPartlin had ‘committed adultery’ and that his former wife found it ‘intolerable to live with’ the TV star.

Following their split, it was revealed that Ant was dating former PA and mother-of-two Anne-Marie. 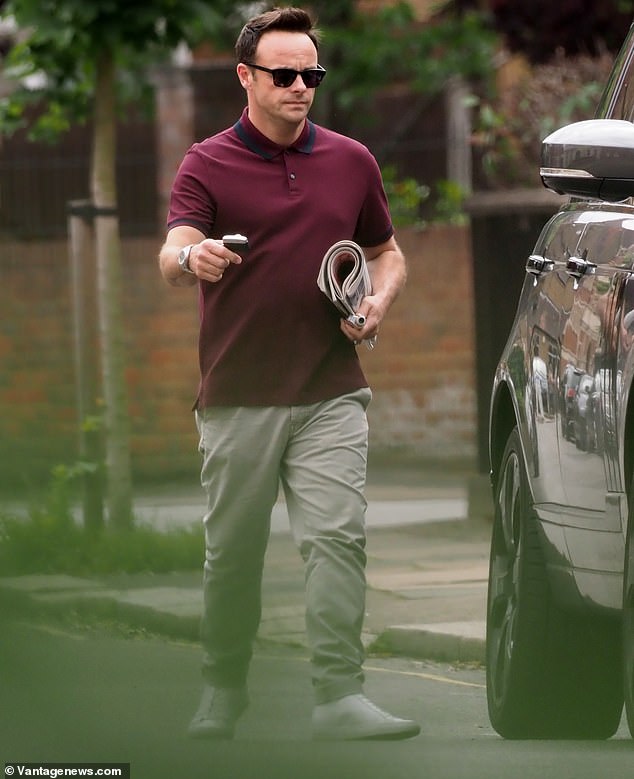 Taking control: The Geordie pulled out his car key to unlock his flashy car 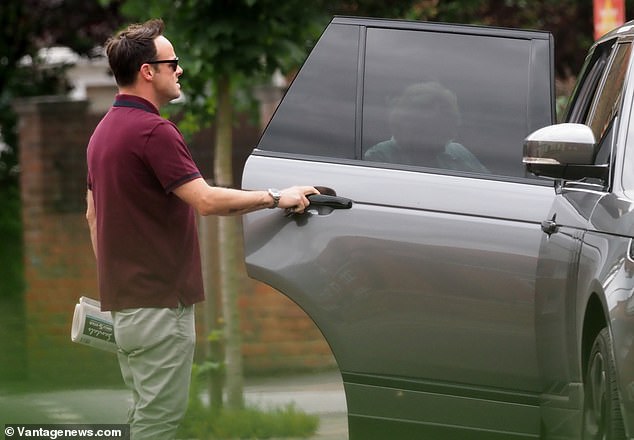 Pal: Also joining the pair was another female companion who sat in the back of the luxury vehicle

Lisa has since revealed she didn’t know personal assistant Anne-Marie and her ex-husband were dating until she saw pictures of them together in a newspaper.

After the drink-driving case he stepped back from his role in Saturday Night Takeaway.

He also took a break from his role as a presenter on I’m a Celebrity… Get Me Out of Here, as Holly Willoughby replaced him for last year’s edition.

Last week, it was claimed he was set to return to work on I’m a Celebrity with Declan Donnelly. 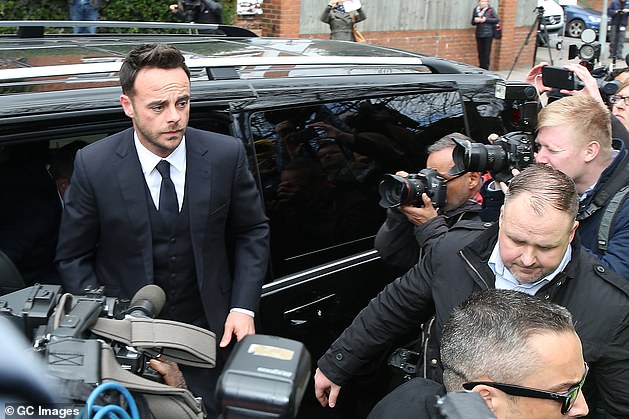 Facing the music: Ant arriving at Wimbledon Magistrates’ Court last year where he was handed a huge fine and a 20-month driving ban, which fell to 15 months after drink driving

Earlier this year Ant and Dec revealed how they had considered ending their partnership over McPartlin’s drink-driving conviction.

A sentencing judge told him his behaviour had left fans disappointed and stripped him of his former ‘exemplary’ character.

Speaking on the court steps following sentencing McPartlin said: ‘I just want to say I’m truly sorry for what happened. 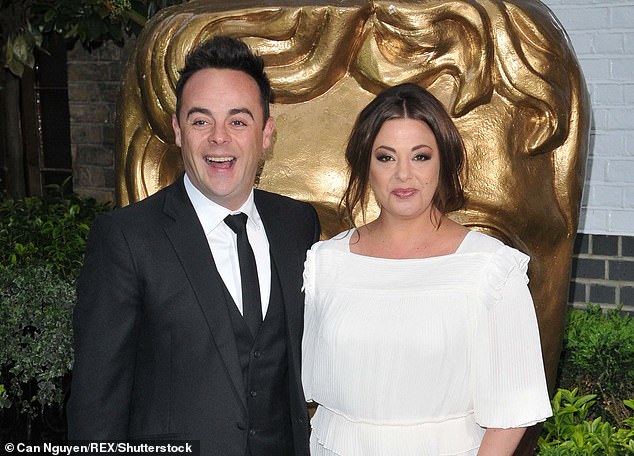 Tough time: Magistrates previously heard that McPartlin had been seeking help for ‘alcohol and emotional issues’ after breaking up with his wife Lisa Armstrong ( pictured together in 2015)

‘High standards are expected of me, I expect them of myself. I’ve let myself down, I let a lot of people down. And for that I am truly sorry.

‘I’d like apologise to everybody involved in the crash and I’m just thankful no-one was seriously hurt.’

McPartlin pleaded guilty to driving with 75 microgrammes of alcohol in 100 millilitres of breath. The legal limit is 35 microgrammes.

He collided with another Mini Cooper before driving ‘straight into the front of an oncoming car’ – a BMW with a doctor and her nine-year-old son on board.

The driver of the other Mini said in a statement: ‘Myself and my family were in deep shock as we believed we could have died as a result of Mr McPartlin’s reckless driving.’

The driver of the BMW – named only as Dr Ng – said she immediately looked over at her son following the crash to make sure he was OK and he said: ‘I’m dying mummy, I’m dying.’

‘I saw he was physically fine with no major injuries, but in shock,’ the statement said.

‘He described how the car was coming around the corner ‘like a rocket’.’

She told how the airbags of McPartlin’s Mini had deployed and said she feared for the life of the driver inside.

‘I’m horrified at how someone can drive so dangerously. I genuinely thought the driver of the black Mini had died as there was no movement and it was a really forceful crash,’ she added. 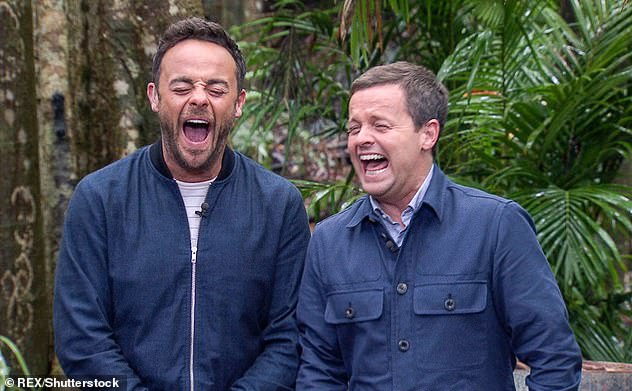 Time off: Ant took a break from his role as a presenter on I’m a Celebrity… Get Me Out of Here (pictured on the show with Declan Donnely in 2017)

Kim Kardashian again insists she has never had a nose job
Jennifer Lopez pulls off an Ariana Grande style ponytail as she says Alex Rodriguez 'too perfect'
Taylor Swift reveals she 'put up a defence mechanism' during her 'dark' Reputation era
Will Smith was 'stressed and daunted' playing Genie in the Aladdin remake after Robin Williams
Rose Williams turns heads in a figure-hugging milkmaid dress
Felicity Jones undergoes outfit change as she joins Eddie Redmayne at The Aeronauts afterparty
Caitlyn Jenner has ALREADY taken part in I'm A Celebrity... Get Me Out Of Here!
Love Island: Twins Eve and Jess fall out before stealing Mike and Callum from Leanne and Shaughna