A disabled mother-of-one has shared how her 13-inch pug terrier has saved her life,  by taking her socks off, opening doors, tidying up – and even fetching the TV remote.

Judith Margolis, 67, has been wheelchair bound since 2007 when she was forced to give up her job as a university lecturer because of her condition. 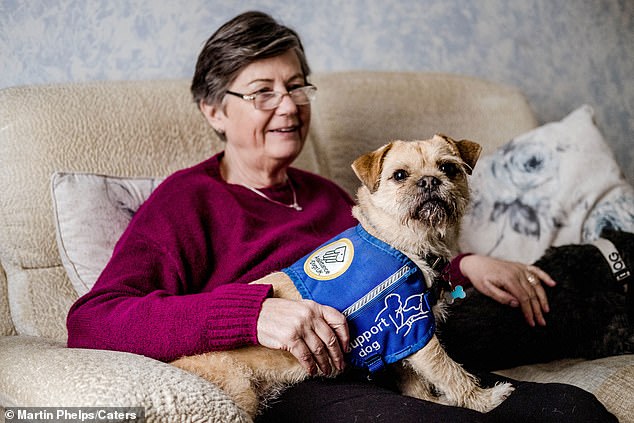 Judith Margolis, 67, has been wheelchair bound since 2007 when she was forced to give up her job as a university lecturer because of her condition

The clever hound can even soothes the crippling pain her legs – meaning Judith has been able to reduce her medication.

Judith, from Cambridge, said: ‘Fudge does his tasks which is incredible. He helps me so much on a day to day basis.

‘He’s also an incredible painkiller for me too.

‘He’ll get up and sit on my legs and it’s like having the most amazing fluffy hot water bottle.

‘I’ve even been able to stop using one of my painkillers because of him.

‘He’s a huge confidence booster for me when I’m out and about.

‘He’s the most loving dog I’ve ever had. He’s so loving and affectionate.

‘I think to say that he has saved my life is a cliché but actually, he has.’

Juidth began to develop cerebellar ataxia – a disorder that causes a lack of muscle and coordination control – in the early 2000s and by 2006 was in a wheelchair. 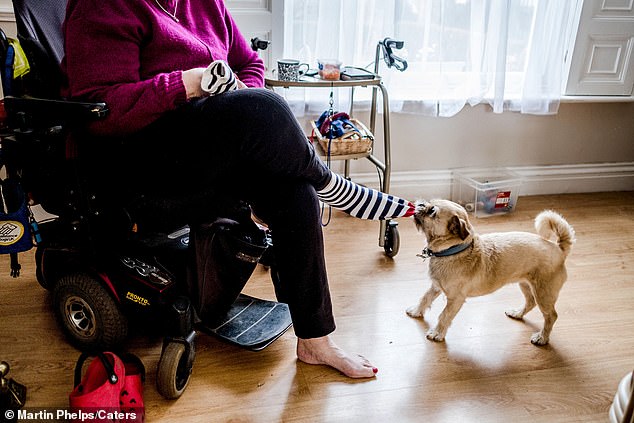 Juidth began to develop cerebellar ataxia – a disorder that causes a lack of muscle and coordination control – in the early 2000s and by 2006 was in a wheelchair. She now lives with Fudge, Britain’s smallest working support dog. He helps her by taking her socks off (pictured) opening doors, tidying up – and even fetching the TV remote

She previously had another support dog, Alfie, a Lhasa Apso who retired.

In 2016 she was paired with Fudge, a terrier pug cross rescued by charity Blue Cross who then spent 18 months being specially trained by support pooch organisation Support Dogs.

Fudge and Judith are now inseparable, with the tiny pooch helping Judith with everything from bringing her the phone, helping undress her and even opening and closing doors.

Judith said Fudge can do all tasks other assistance dogs bigger than him can also do – and has even raised the alarm when she’s fallen out of her wheelchair, something he isn’t trained to do.

She said: ‘I fell out of my wheelchair a few weeks ago while I was out on a walk with Fudge. 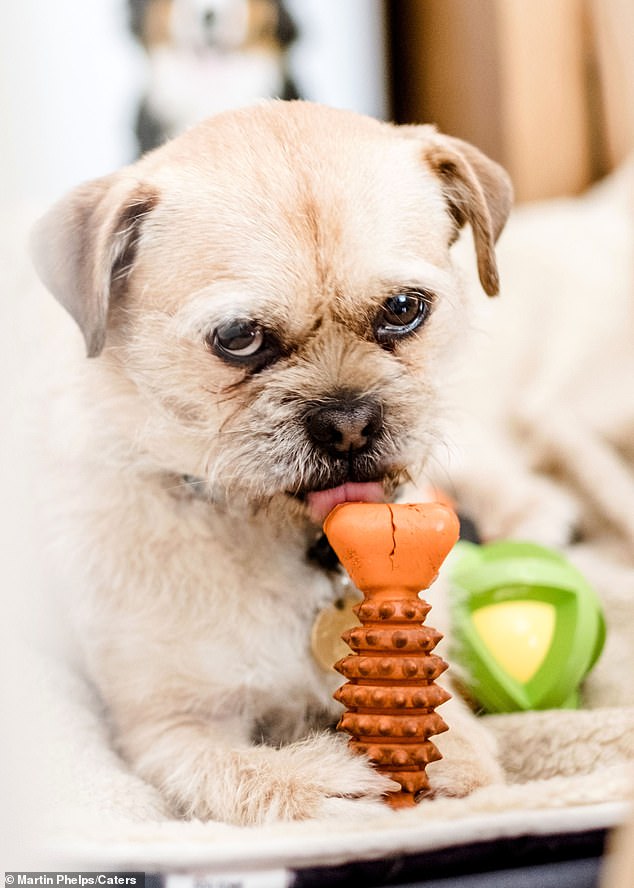 Fudge and Judith are now inseparable, with the tiny pooch helping Judith with everything from bringing her the phone, helping undress her and even opening and closing doors

‘He’s not trained to alert people but he ran over to the other side of the field I was in and got someone’s attention and then brought them over to me.

Describing a typical day with Fudge, Judith added: ‘I get up and Fudge helps me get undressed and brings me my slippers and getting dressed.

‘After breakfast we always go for a walk so he can have some free time.

‘He jumps up on my bench so I can put on his lead and then opens and closes the back gate and off we go to the park.

Ataxia is a term for a group of disorders that affect co-ordination, balance and speech.

A genetic defect leads to impairment of specific nerve fibres that carry messages to and from the brain to control movement of the body.

Hereditary ataxia is caused by a faulty gene.

Spinocerebellar ataxias (also called SCA’s) are caused by mutations in different genes – there are more than 165 types.

Other types include episodic ataxia, a rare and unusual type of hereditary ataxia where someone experiences episodes of ataxia, but the rest of the time they have no or only mild symptoms.

Treatment ranges from speech, language and physical therapy as well as painkillers

‘He loves to run free and meet other dogs. He has an amazing recall and comes back when I blow my whistle.

‘He loves his treats so I always reward him when he returns. He loves his ball and brings it back when I throw it.’

Judith even said Fudge has helped her improve her social life and helped her mental health.

She said: ‘When you’re disabled you become a bit invisible but if you have a dog people come up to you and talk to you so socially it’s made a huge difference.

‘He comes everywhere with me. We’re a team.

‘Because without Fudge I would probably not go out and not see anybody, and I’m quite a positive person, but without people and doing things it’s very easy to sink into depression if you’ve got cerebella ataxia.

‘With a dog I have to get up and go out, and just that pressure alone makes such a difference. So he’s saved my life, really.’

Danny Anderson, fundraising manager at Support Dogs, said: ‘We work with a variety of dogs, including those from rescue centres or unwanted pets. We don’t have our own breeding programme and love being able to give an amazing dog a second chance and transform them into a lifesaver.’

‘He was very busy, into everything and clearly intelligent.

‘At Blue Cross we always carefully match pets in our care to the best new home – for both the dog and their new owners – so thought Fudge might need be busy with lots to do in his new home or he might get bored and frustrated.

‘We thought Fudge may thrive in a working environment so when Support Dogs got in touch we knew he would be just the ticket.’

Dwayne 'The Rock' Johnson slammed for casting himself in Neflix film about dark skinned folk hero
Protests in Pakistan over Christian woman's acquittal end
Meet Kimbal Musk, Elon's younger brother and trustee on a sustainable eating and energy mission
It's a bittern difficult to spot: Small yellow heron hides among the reeds in India
Adidas says women soccer players to get the same World Cup bonus as men
Meghan Markle set to skip President Donald Trump's state visit to Britain
Miranda Hart quits the TV company she set up with David Walliams
Animal lovers decide to entertain their pets with a dinner for two at the dining table