Scientists say new readings on the the rate of the universe’s  expansion has only added to a growing mystery.

According to , the new measurement, which comes from data gleaned from Hubble Space Telescope, falls in the middle of a hotly contested debate between two dueling theories.

‘The Hubble constant is the cosmological parameter that sets the absolute scale, size and age of the universe; it is one of the most direct ways we have of quantifying how the universe evolves,’ said University of Chicago professor Wendy Freedman. 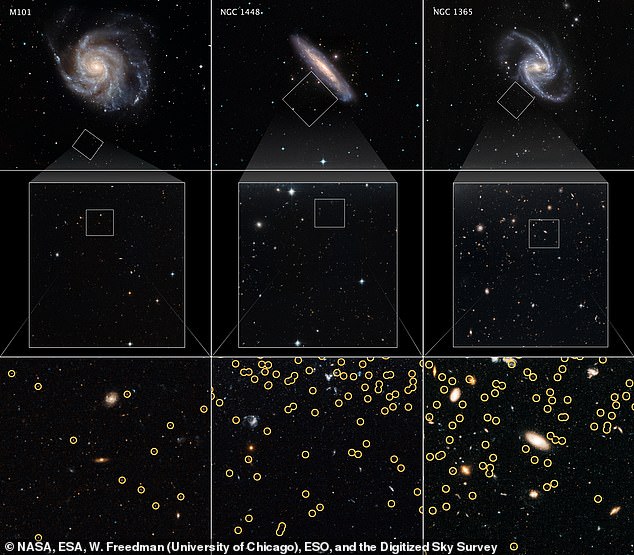 These galaxies are selected from a Hubble Space Telescope program to measure the expansion rate of the universe, called the Hubble constant

‘The discrepancy that we saw before has not gone away, but this new evidence suggests that the jury is still out on whether there is an immediate and compelling reason to believe that there is something fundamentally flawed in our current model of the universe.’

When it comes to measurements on the universe, the debate has centered on one major difference.

While a model based on light left over from the Big Bang called Cosmic Microwave Background puts the expansion at 67 kilometers per second, other measurements using a type of star called a Cepheid as a barometer have put that rate at about 73.

As a result, scientists on both sides have been searching for causes in the discrepancy, but have yet to resolve the issue.

Some have even posited that scientists may have to completely reconfigure their view of how the universe operates.

‘Naturally, questions arise as to whether the discrepancy is coming from some aspect that astronomers don’t yet understand about the stars we’re measuring, or whether our cosmological model of the universe is still incomplete,’ Freedman said in a statement.

‘Or maybe both need to be improved upon.’

To help resolve the discrepancy, researchers focused the latest method on a type of luminous red giant undergoing an event called a ‘helium flash.’ 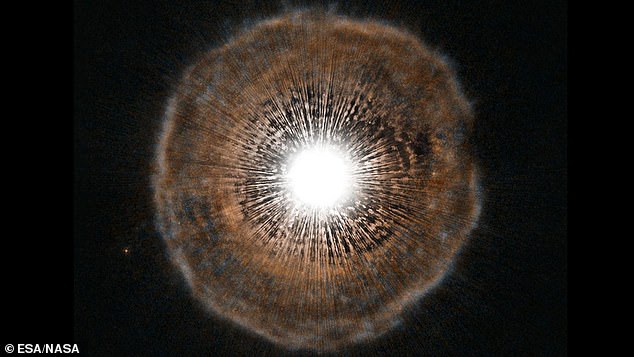 The ultra-bright stars, which rise in temperature by 100 million degrees, make perfect candidates for studying stars in distant galaxies since they’re much easier to spot and glean accurate readings from.

Much to researcher’s dismay, however, the findings landed somewhat in the middle of the two rates of expansions, clocking in at about 69 kilometers per second.

‘Our initial thought was that if there’s a problem to be resolved between the Cepheids and the Cosmic Microwave Background, then the red giant method can be the tie-breaker,’ said Freedman in a statement.

Though the method had no such luck, researchers say an upcoming mission by the Wide Field Infrared Survey Telescope, which will launch next year, might help bring more clarity.

The telescope is capable of getting a view of the times that is 100 times bigger than Hubble and will increase scientists sampling of data.

WHAT IS THE HUBBLE SPACE TELESCOPE?

The Hubble telescope was launched on April 24, 1990, via the space shuttle Discovery from Kennedy Space Centre in Florida.

It is named after famed astronomer Edwin Hubble who was born in Missouri in 1889.

He is arguably most famous for discovering that the universe is expanding and the rate at which is does so – now coined the Hubble constant.

Hubble has made more than 1.3 million observations since its mission began in 1990 and helped publish more than 15,000 scientific papers.

Hubble has the pointing accuracy of .007 arc seconds, which is like being able to shine a laser beam focused on Franklin D. Roosevelt’s head on a dime roughly 200 miles (320km) away.

Hubble’s launch and deployment in April 1990 marked the most significant advance in astronomy since Galileo’s telescope.

Thanks to five servicing missions and more than 25 years of operation, our view of the universe and our place within it has never been the same.