She was supposedly snubbed for an Emmy nomination for her role in Amazon’s Homecoming.

But Julia Roberts was able to poke fun at her awards misfortune when she took to Instagram shortly after Tuesday’s announcements.

Sharing a screenshot of USA Today headline which declared she was spurned along with stars Emma Stone and George Clooney, she wrote: We’ll I’m in exceptional company at least.’ 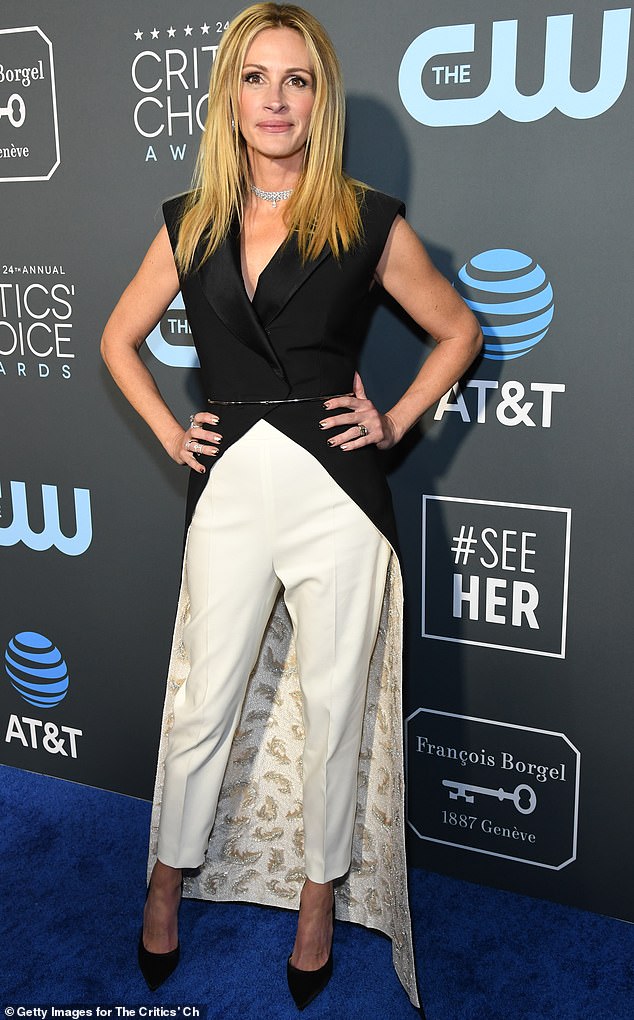 In good company: Julia Roberts said she was ‘in exceptional company’ after she was declared to have been ‘snubbed’ for an Emmy Award 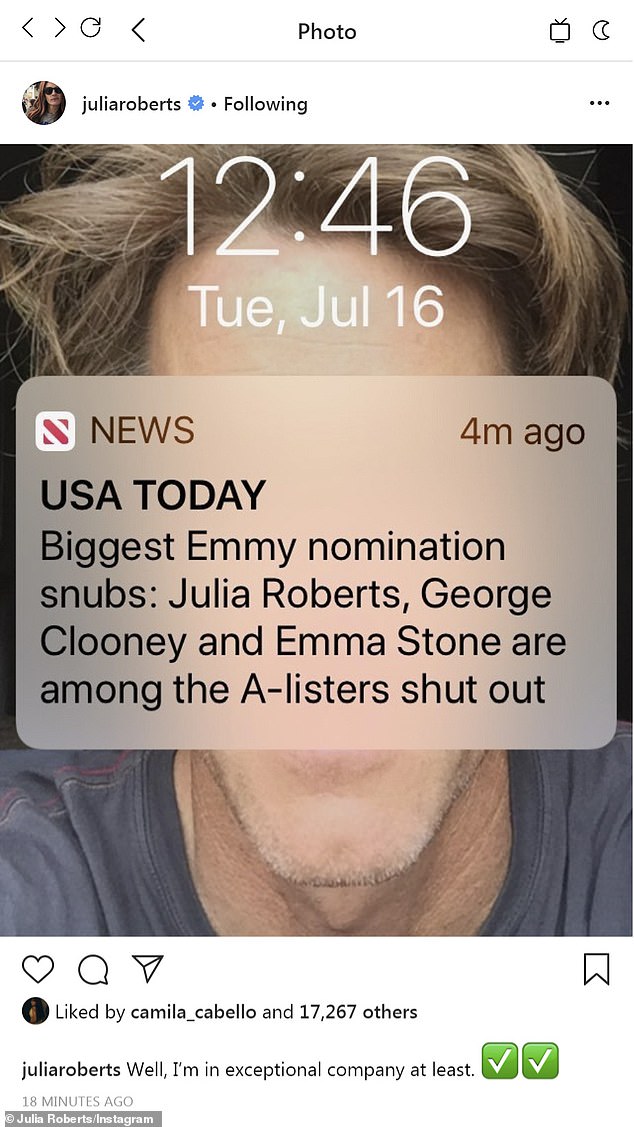 Julia was snubbed for her part as caseworker Heidi Bergman in Amazon’s Homecoming, what was her first major TV role. This comes even after she was nominated for a Golden Globe for the part last year.

George was overlooked for his part in Catch-22, while Emma had a near miss with her role in the Netflix series Maniac.

There were plenty of big celebrity names and hit shows left off the long list of nominees chosen by the Academy of Television Arts & Sciences.

Another big surprise was that Big Bang Theory with Kaley Cuoco and Jim Parsons, which was a massive hit that finally came to a close this year with a heartfelt finale, was ignored.

And TV staple Modern Family with Sofia Vergara and Julie Bowen was left off the list too, as it was last year. 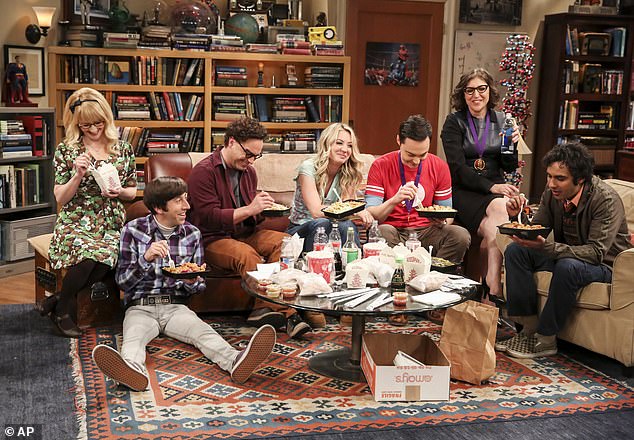 No love: Big Bang Theory, which saw its finale this year, did not receive an Emmy nomination on Tuesday 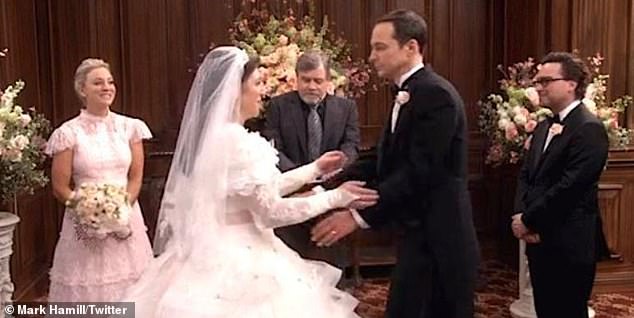 They said I do: From left, Kaley Cuoco, Mayim Bialik, Mark Hamill, Jim Parsons and Johnny Galecki in a photo shared by Hamill

Black-ish has been up for best comedy series the past three years, but was overlooked this year. Its star Tracee Ellis Ross was off the list too. And The Conners with Sara Gilbert was passed over.

Sally Field was not included for their work on Maniac. Allison Janney got nothing for her sitcom Mom – she won in 2014 and again in 2015.

And Jim Carrey was not recognized for Kidding in the Best Comedy Actor category.

Nikolaj Coster-Waldau and Peter Dinklage did not get nods for Game Of Thrones, though Emilia Clarke and Kit Harington did. The show also landed a nod in the Outstanding Drama Series category. 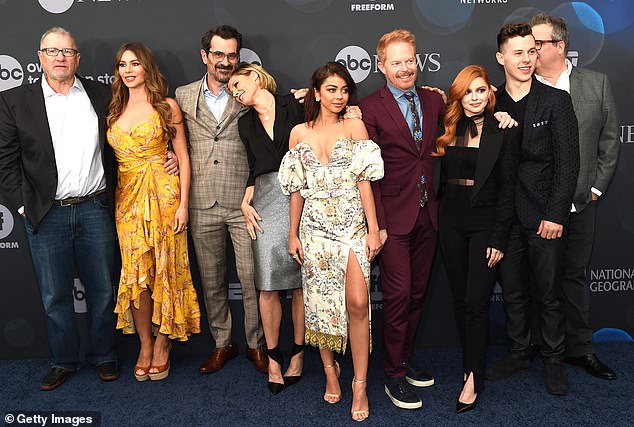 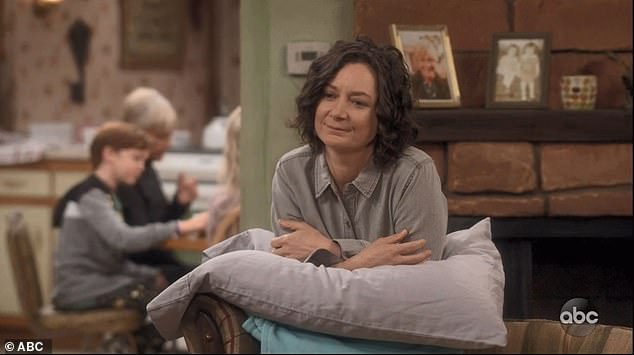 Nothing coming up for this one: And The Conners with Sara Gilbert was passed over

Connie Britton was a hit as a woman whose boyfriend turns into a creep in Dirty John, but she was no named on Tuesday.

Chrissy Metz was not named for her acting in This Is Us, though Mandy Moore and Milo Ventimiglia were nominated. The show landed in the Outstanding Drama Series slot.

Ian McShane for Deadwood: The Movie was left off too.

George Clooney did not get praised for his work on the war satire Catch-22. It was his first TV show since ER. 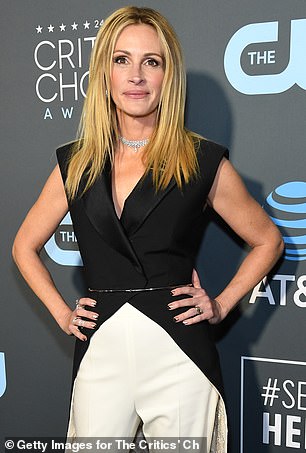 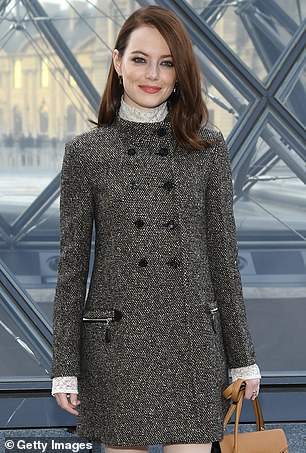 Too bad: Julia Roberts did not get a nod for Homecoming; seen in January. And Emma Stone was left out for her role in Maniac; seen in March 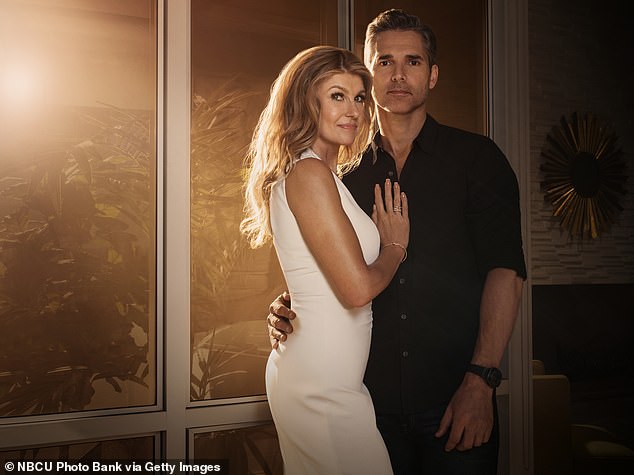 A shame: Connie Britton was a hit as a woman whose boyfriend turns into a creep in Dirty John, but she was no named on Tuesday. Seen with Eric Bana 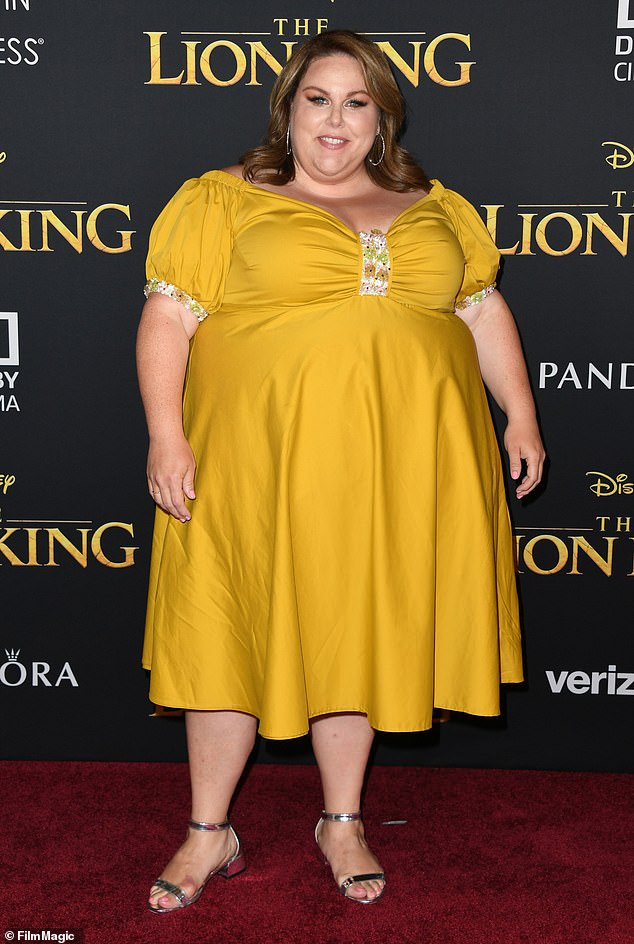 Should have been on the list: Chrissy Metz (pictured on Sunday) was not named for her acting in This Is Us, though Mandy Moore and Milo Ventimiglia were nominated. The show landed in the Outstanding Drama Series slot 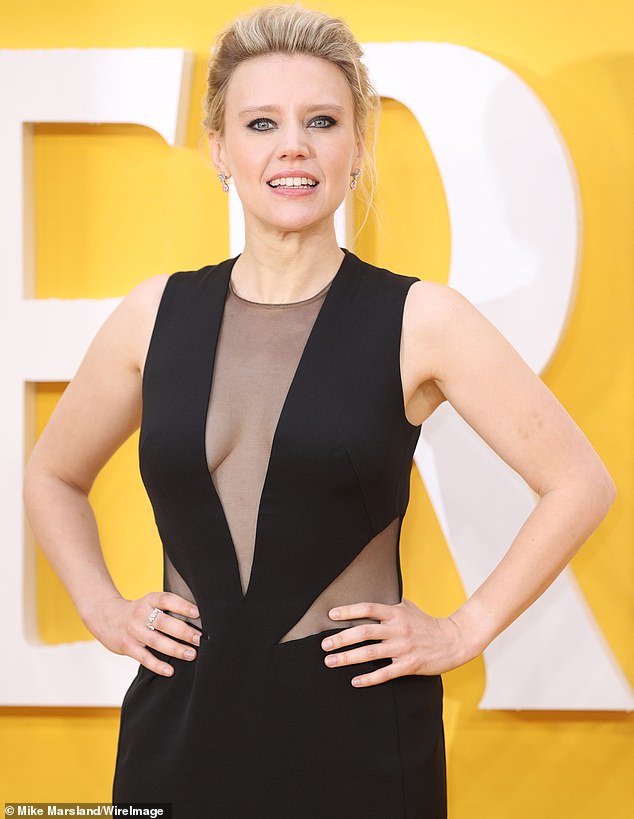 Zero: And Kate McKinnon (seen in June) was not nominated for Saturday Night Live nor was Kenan Thompson

Jane Fonda and Lily Tomlin and their Netflix show Grace And Frankie were ignored.

Chris Pine was expected to be nominated for I Am The Night, but he got nothing.

Christine Baranski could have been recognized for The Good Fight but wasn’t.  And Kate McKinnon was not nominated for Saturday Night Live nor was Kenan Thompson.

Richard Madden did not get a nod for Bodyguard though the show received a Best Drama nomination. Ricky Gervais’ After Life was also off the list.

The Detour as well as its stars Natalie Zea and Jason Jones should also have been nominated as the show is a critical and ratings dynamo.

Timothy Simons was not included for his work on Veep though Julia Louis-Dreyfus landed on the list again. And the show landed in the Outstanding Comedy Series box.

Gossip Girl vet Penn Badgley did not receive a nod for his work on You.

Both Jimmy Fallon and Seth Meyers are routinely excluded from the Emmys.

It was also a shock that D’Arcy Carden – who announced the nominations, did not receive a nomination for her show The Good Place.

The Emmys will air live on Sunday, September 22, 2019 at the Microsoft Theater in Downtown Los Angeles, California, and will be broadcast in the US by Fox.

On April 9, 2019, it was announced that limited series American Horror Story: Apocalypse and the second season of The Sinner would not qualify for the Limited Series categories, and instead be moved to Drama.

They did the same for Netflix series, American Vandal, moving it to Comedy.

The show is produced by Don Mischer and Ian Stewart. 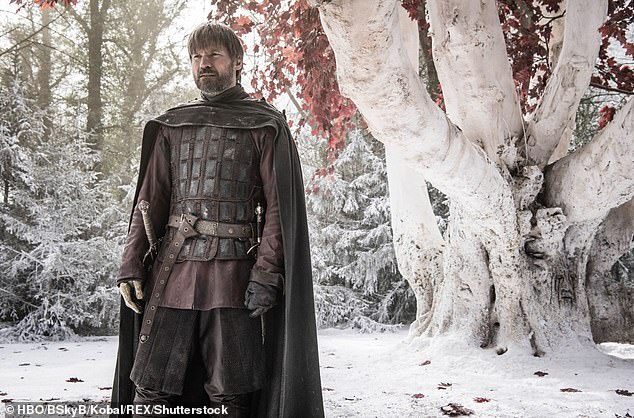 Harsh game: Nikolaj Coster-Waldau (pictured) and Peter Dinklage did not get nods for Game Of Thrones, though Emilia Clarke and Kit Harington did 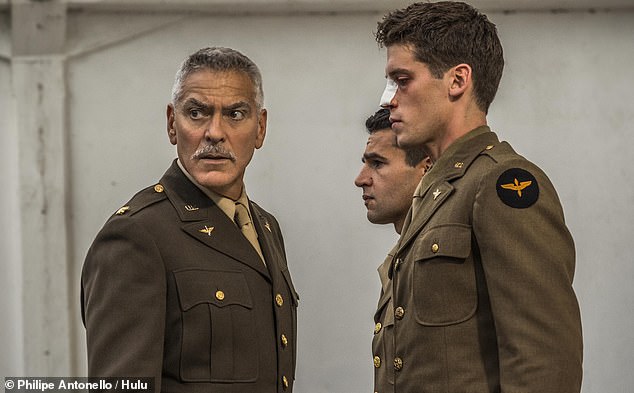 Not on the list: George Clooney did not get praised for his work on the war satire Catch-22. It was his first TV show since ER

Some of the famous Emmy snubs from 2018 were Harington and Clarke from Game Of Thrones.

Modern Family was left off.

The women of This Is Us were also hit hard with nothing for Mandy Moore or Chrissy Metz, though Sterling K. Brown and Milo Ventimiglia were named.

And Liev Schreiber didn’t get any attention for his starring role as a fixer in the Showtime series Ray Donovan. 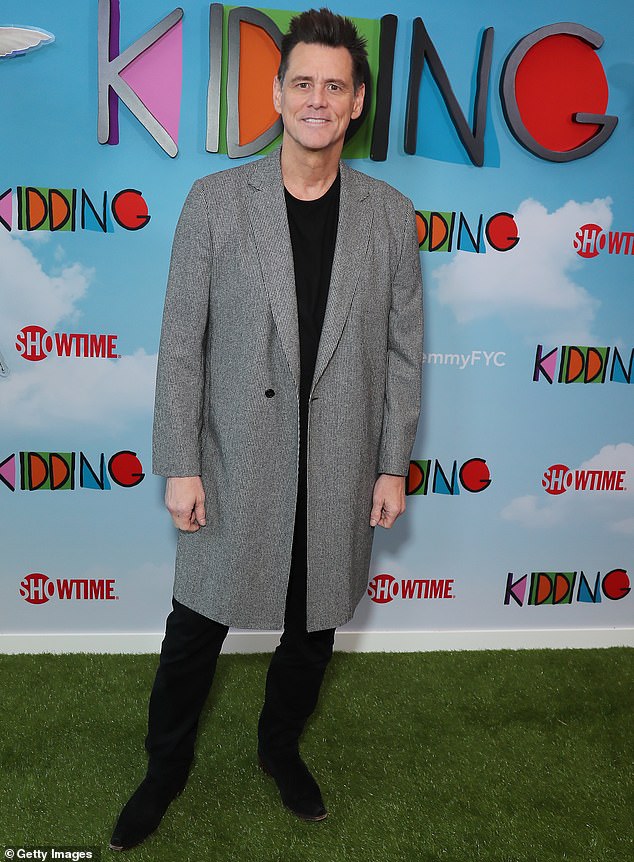 No go: Jim Carrey was not recognized for Kidding in the Best Comedy Actor category; seen in May in LA

My Dinner with Herve

When They See Us

Lead Actor in a Drama Series

Sterling K. Brown, This Is Us

Milo Ventimiglia, This Is Us

Lead Actress in a Drama Series

Viola Davis, How to Get Away with Murder,

Mandy Moore, This Is Us

Lead Actor in a Comedy Series

Lead Actress in a Comedy Series

Christina Applegate, Dead to Me

Lead Actor in a Limited Series of Movie

Jharrel Jerome, When They See Us

Lead Actress in a Limited Series of Movie

Aunjanue Ellis, When They See Us

Niecy Nash, When They See Us

The Daily Show with Trevor Noah

The Late Show with Stephen Colbert

CBB's Roxanne Pallett is called out by 21 of her ex Emmerdale co-stars after Ryan Thomas punch row
Katie Price is slammed by fans after she shares a snap of her daughter Bunny on a pony
Kate Beckinsale dons a latex crop and pencil skirt top as she parties with drag queens at LA Pride
Amanda Keller stuns in a glittery gown at the Logies
Kate Moss, 45, highlights her supermodel figure in black swimsuit
Julianne Hough sizzles in polka dot dress at Saks x Happy Not Perfect dinner in West Hollywood
Alessandra Ambrosio poses for snap with daughter Anja, 11, in matching bikinis
David Walliams makes 'nasty' joke about embattled Love Island host Caroline Flack at the NTAs