Jeremy Corbyn is facing fresh criticism over Labour’s handing of the anti-Semitism crisis today as more than 200, politicians, ex-staff and supporters tore into its treatment of whistleblowers who took part in a bruising documentary.

The group, which includes peers, commentators and the daughter of former party leader Neil Kinnock, lashed out at how it responded to the Panorama exposé last Wednesday.

Labour has been plunged into a deepening civil war since  it aired, sparking fury from Mr Corbyn’s team and supporters.

They have mostly turned their fire on his deputy Tom Watson and others seeking to institute a new independent process for dealing with complaints.

Labour has also threatened those former staff members who took part in the programme with legal action for breaching non-disclosure agreements (NDA).

It came after one of Mr ‘s top team warned that the party should not be ‘going for’ staff who speak out over anti-Semitism as the party continues to fracture over the issue.

Shadow foreign secretary Emily Thornberry said the left-wing party should not pretend there is not a problem with anti-Jewish behaviour within its ranks and how it was tackled.

In their letter, the mass group said: ‘The revelations in the Panorama documentary deserve to be treated with the utmost seriousness.

‘But the party’s response has been to smear Jewish victims, and former staff, accusing them of acting in bad faith. 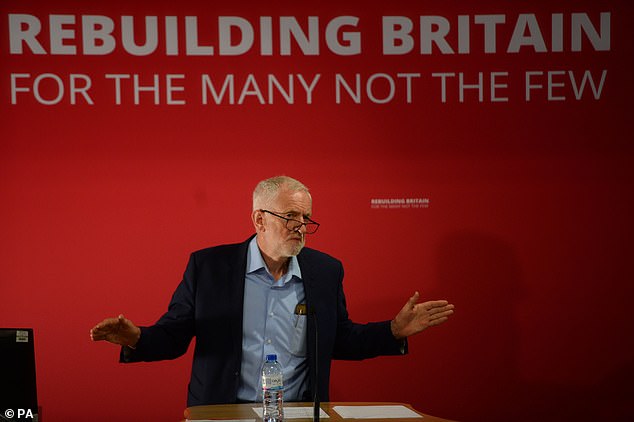 Labour has been plunged into a deepening civil war since the documentary aired, sparking fury from Mr Corbyn’s team and supporters 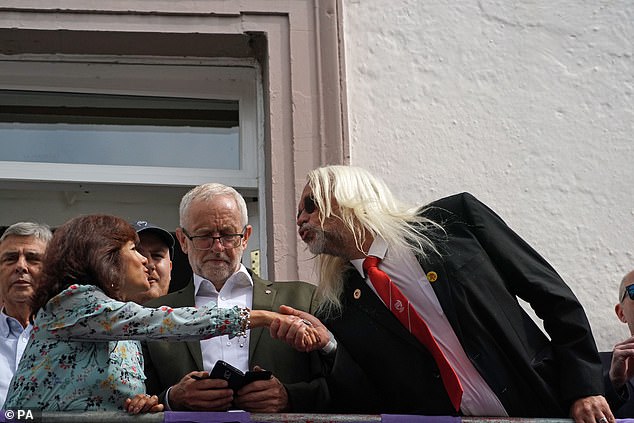 Mr Corbyn attended the Durham Miners’ Gala on Saturday with his wife Laura Alvarez, where they greeted Tosh McDonald (right), a close friend of MP Chris Williamson who has been suspended from the party over anti-Semitism

‘These are dedicated ”civil servants” of the party, who quit jobs they cared deeply about because their working environment was so toxic that it had severe consequences on their mental wellbeing, prompting one staff member to consider suicide. 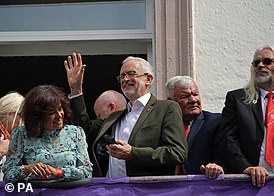 Jeremy Corbyn shared a platform at the weekend with a close friend of a Labour MP currently suspended over allegations of anti-Semitism.

The opposition leader was pictured watching the Durham Miners’ Gala with Tosh McDonald.

Mr McDonald, a former leader of the Aslef rail union and now a Labour councillor, accompanied Chris Williamson on a ‘democracy roadshow’ in which they rode Harley Davidson motorbikes to rallies in constituencies held by Labour opponents of Mr Corbyn.

They were accused of using the appearances to stir up local parties to deselect the MPs in favour of those who would be more loyal to the party leader.

Mr Williamson, the Derby North MP, is currently suspended from the party whip after the party’s NCC ruled that he should face another probe into a pattern of behaviour over anti-Semitism.

It includes telling a Momentum meeting in February that the party had been ‘too apologetic’ about the issue.

He had originally been let off with a warning, sparking uproar among other MPs and staff.

‘The way the party has threatened and denigrated these whistleblowers is appalling, hypocritical and a total betrayal of Labour’s core values.

‘Exposing racism and corruption represents Labour’s values in action, and these whistleblowers should be thanks, not demonised.’

Mr Corbyn is not expected to be present when MPs discuss the documentary at the weekly Parliamentary Labour Party (PLP) meeting tonight.

Addressing the Durham Miners’ Gala on Saturday, Mr Corbyn said the documentary had contained ‘many, many inaccuracies’.

But it came as Mr Corbyn’s right-hand man John McDonnell , the shadow chancellor, claimed Labour was ‘getting on top of’ the problem in its ranks.

Ms Thornberry, who has also diverged from the Corbyn position on Brexit in recent weeks, told the BBC: ‘I think that we shouldn’t be going for the messengers, we should be looking at the message. I think that is what is important.

‘Nobody can pretend that there isn’t an ongoing problem within the Labour Party about anti-Semitism, about our processes for dealing with it.’

However, shadow chancellor John McDonnell insisted the problem was being dealt with, with new systems put in place.

‘There’s always lessons to be learnt, but I think the way Jennie Formby, our general secretary, has operated, implemented the measures, is getting on top of this,’ he told BBC Radio 4’s World At One.

Mr Corbyn told PA: ‘Anti-Semitism is a poison within our society, and as a party we have a process for dealing with it and we support all our staff for any stress that they’re going through and dealing with.’

Pressed on whether he supports her comments, he added: ‘Emily is speaking for the party, has made her views known, and obviously we are dealing with this process.’ 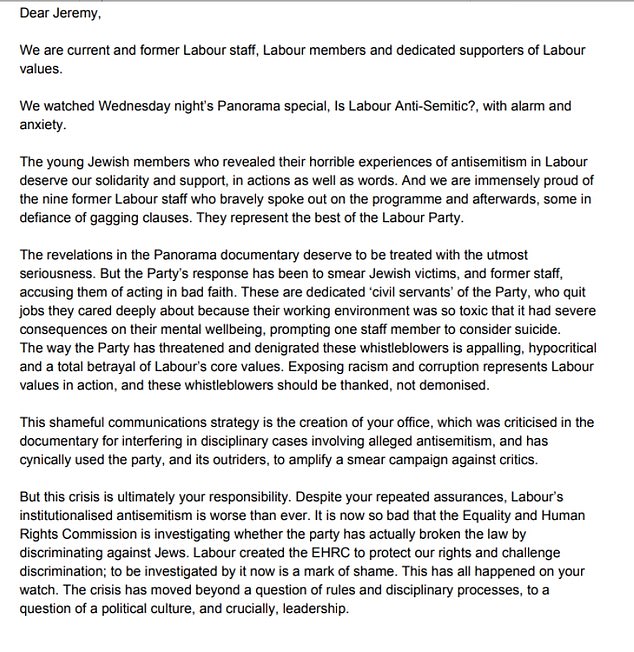 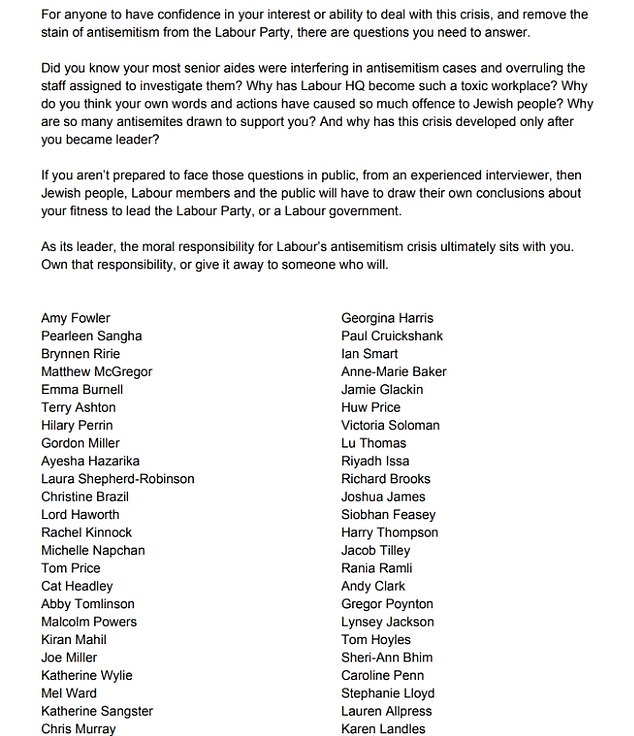 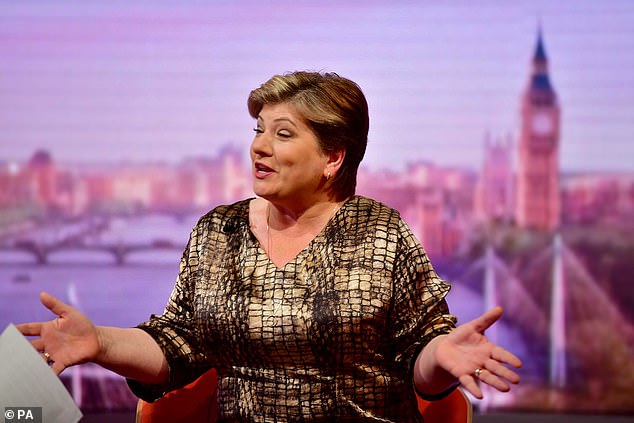 Ms Thornberry told the BBC: ‘I think that we shouldn’t be going for the messengers, we should be looking at the message’

‘And we take action against anyone committing any racist act whatsoever in our party.’

Senior pro-Corbyn ministers and trade union leaders have also turned on his deputy Tom Watson, who has taken a lead in trying to make sure the party cleans up its act.

He was branded a ‘f**king disgrace’ on Saturday by his former close friend Len McClusky, the Unite union kingpin, after criticising Labour general secretary Jennie Formby while she is being treated for breast cancer.

‘I wish he wasn’t attacking somebody who is going through chemotherapy. I think that is a mistake,’ she said.

‘She is the general secretary of the Labour Party but we know that she is very ill. I think it is completely inappropriate to personalise this.’

London's first vegan fish and chip shop opens in Hackney
'This is a victory for America': Family of Laquan McDonald praise guilty verdict
Jennifer Garner takes son Samuel to the hairdresser where she chats with a mystery man
Carrie Underwood performs Love Wins after announcing she's expecting a boy at CMAs
Half of all mortgages are stretching new owners to the limit, warns Bank of England
Arsenal stars in carjack terror: Mesut Ozil is attacked by knife-wielding moped thugs in London
Five teenagers are arrested for murder in Hong Kong protests
Police find remains of father-of-one after massive search