Despite a wet start on this Super Sunday of sport, Britons have made the most of the weather and brightening skies by hitting the beach and soaking up some sun.

Three events – the Cricket World Cup, the British Grand Prix and Wimbledon – are all scheduled today making it a busy day for sporting fans.

Although there was some light rain in this morning, most of the UK should be bathed in sunshine by early afternoon and dozens of people have already been spotted enjoying the warm weekend temperatures.

In the capital, where and are set to play at 2pm and England are taking on at the cricket final at Lord’s from 10.30am, the mercury should sit around 25C this afternoon. 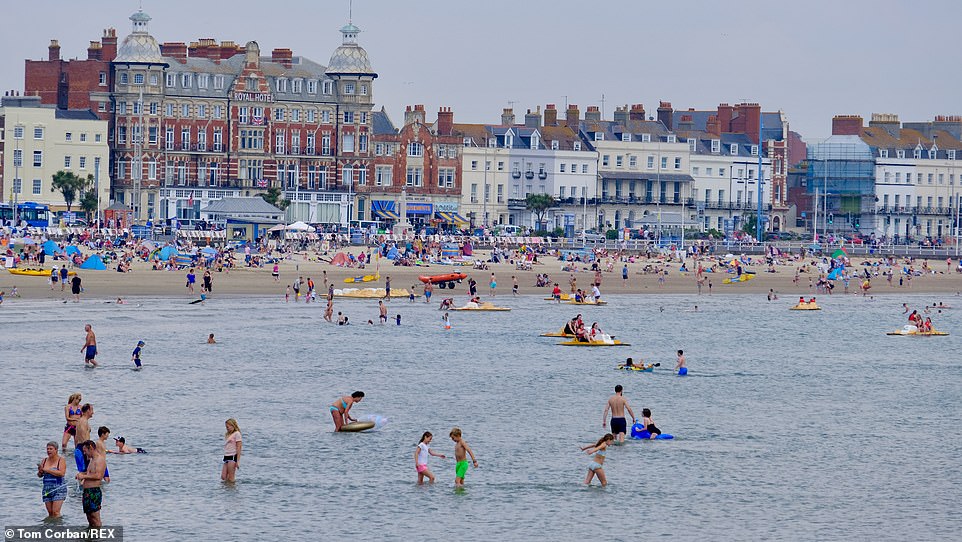 Despite some showers this morning, sun seekers have not been put off and have headed to the beach to enjoy the warmer temperatures expected to hit the UK this afternoon. Pictured are people in Weymouth, Dorset 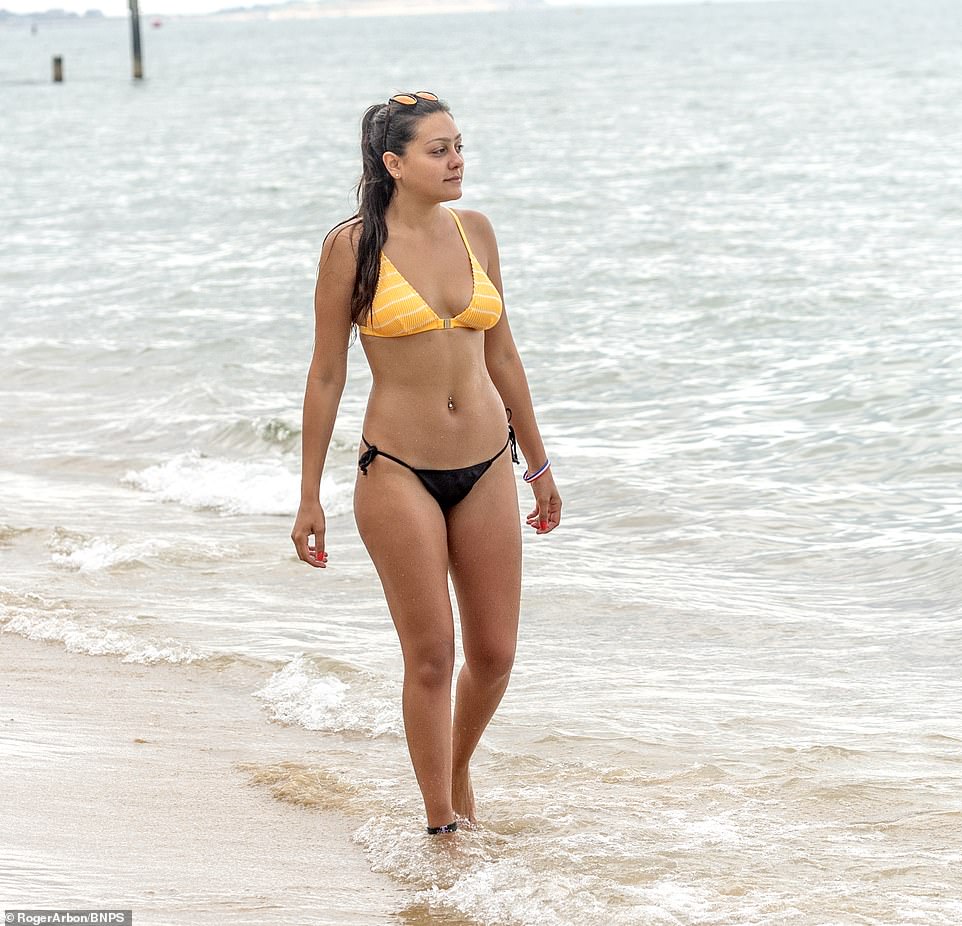 Luli Loiacona, 21, enjoyed a stroll along the beach in Bournemouth where the mercury has hit 20C on Sunday afternoon

Met Office forecaster Simon Partridge said: ‘We’re looking at plenty of sunshine across pretty much the whole of the UK today, though there’ll be some cloud cover across central parts.’

Today Wales may experience some isolated afternoon showers, which are also likely for north-western and western regions of England.

London will start the day with some rain before it clears before lunch time and becomes a brighter day for those making the most of the weekend.

‘Parts of the coast should see a few showers but nothing like we’d get from a proper band of rain. Generally speaking, though, there should plenty of sunshine around on Monday, giving us a dry, sunny start to the week.’ 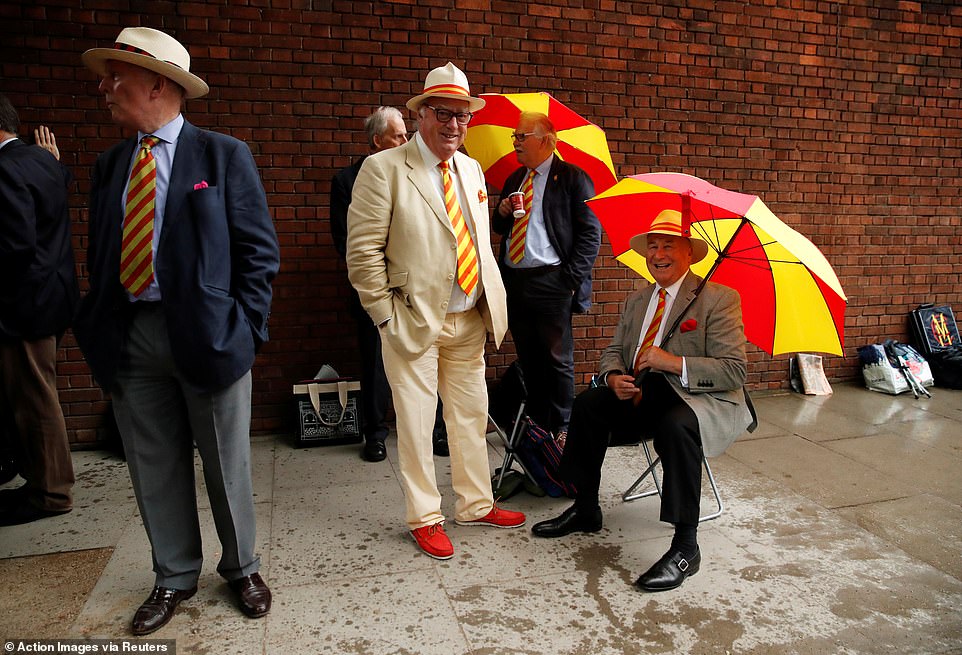 Rain showers have threatened to effect sporting events such as Wimbledon and the Cricket World Cup in London today but are expected to clear up by midday. Pictured are men outside Lord’s before the match against New Zealand this morning 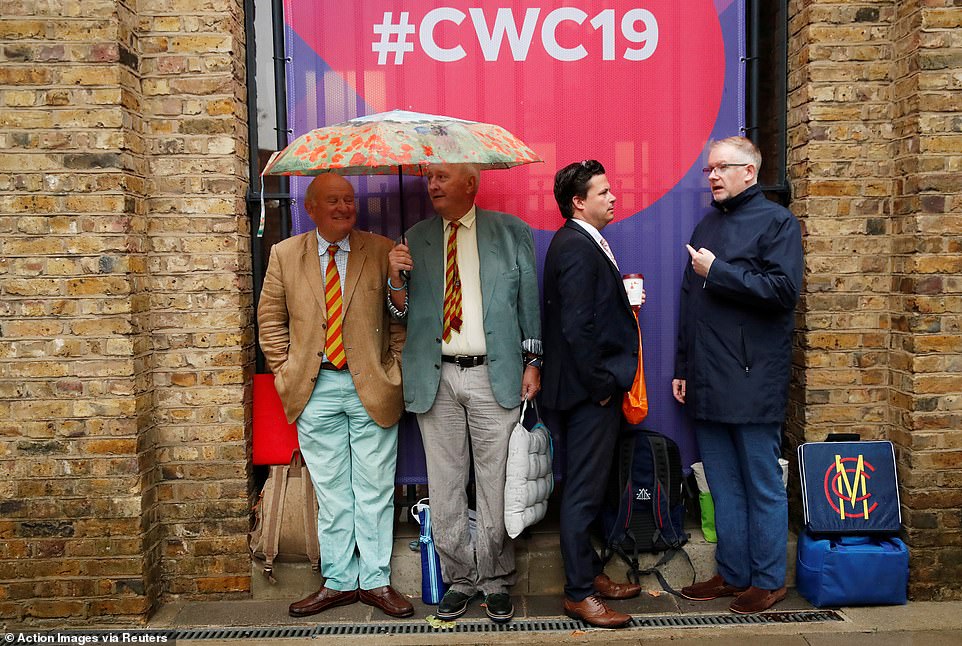 Several fans were seen waiting to get into the stadium in St John’s Wood, London, this morning before the cricket match 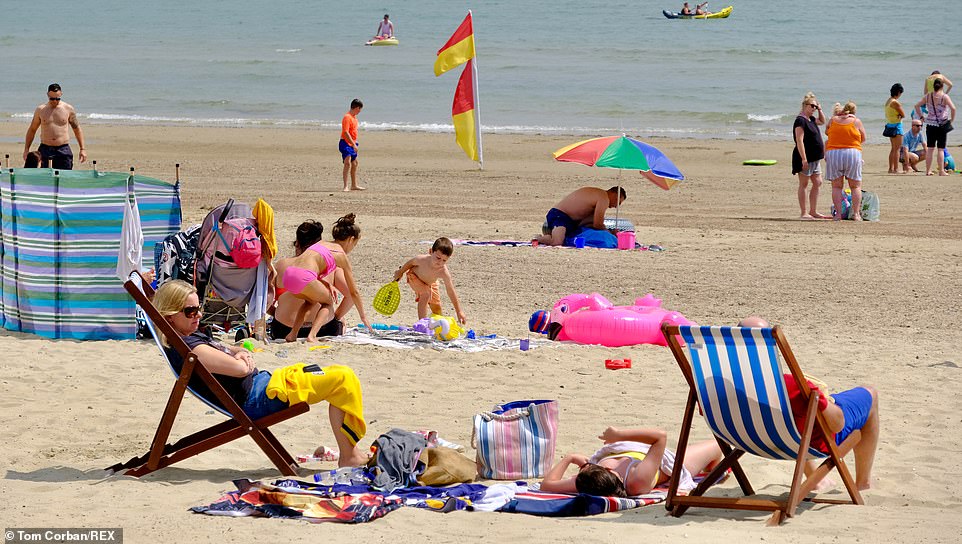 This afternoon should be sunnier and warmer with the start of the week being largely dry across the country. Pictured are people enjoying the sun on Weymouth Beach in Dorset today

On Sunday England will take on New Zealand at Lord’s cricket ground in St John’s Wood, London, for the final match of the World Cup.

The tournament has taken in 11 venues across England and Wales and if England win today it will be the first time they lift the trophy.

Also being played today is the final match of tennis competition Wimbledon.  and are set to play at 2pm.

Yesterday 23-time Grand Slam winner Serena Williams, 37, lost to Simona Halep, 27, on Centre Court. The Duchess of Cambridge, Duchess of Sussex and Pippa Middleton were among the people in the crowds.

The British Grand Prix is also taking place today and due to start at 3.10pm. The Formula 1 race is the 10th in the 2019 championship and is heldat the Silverstone Circuit in Northamptonshire.

Temperatures will rise to around 27C (80.6F) on Tuesday and Wednesday in the South East.

However the sunshine isn’t set to last with rainfall expected in the northwest on Tuesday which will extend to other areas through the week. 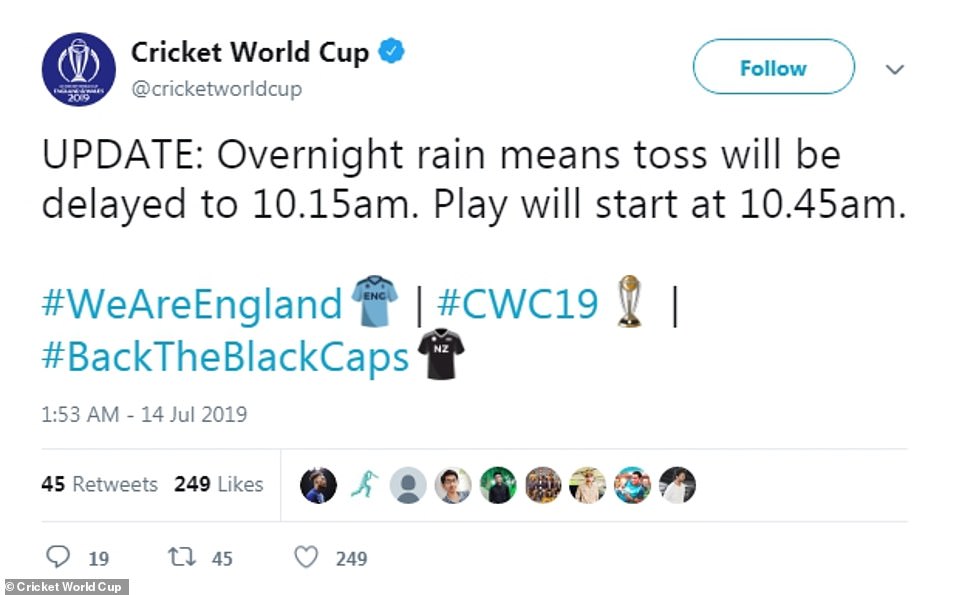 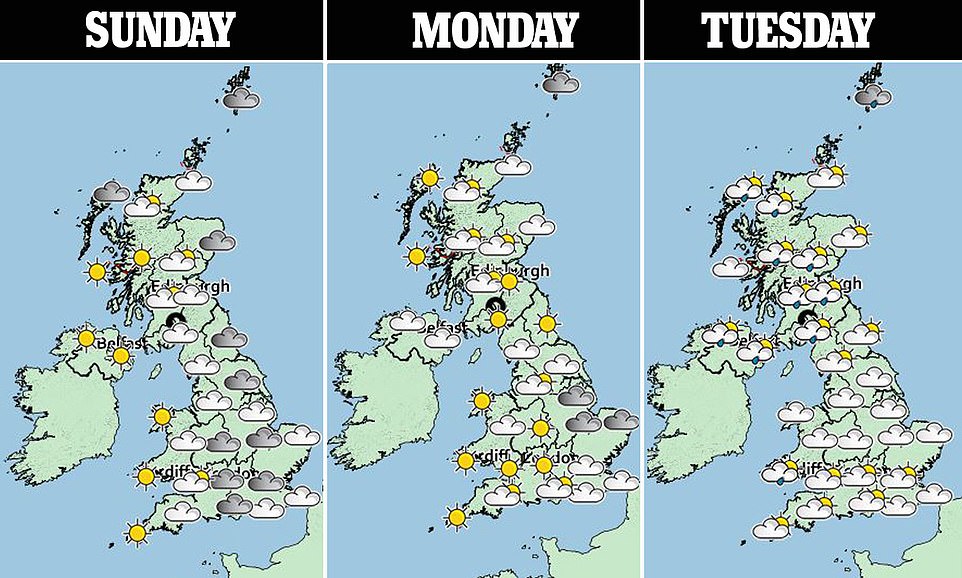 Although some showers were seen in London this morning, left, the skies are expected to clear by midday and give way to sunny skies. Monday and Tuesday are also set to be clear although some rain could occur in some areas 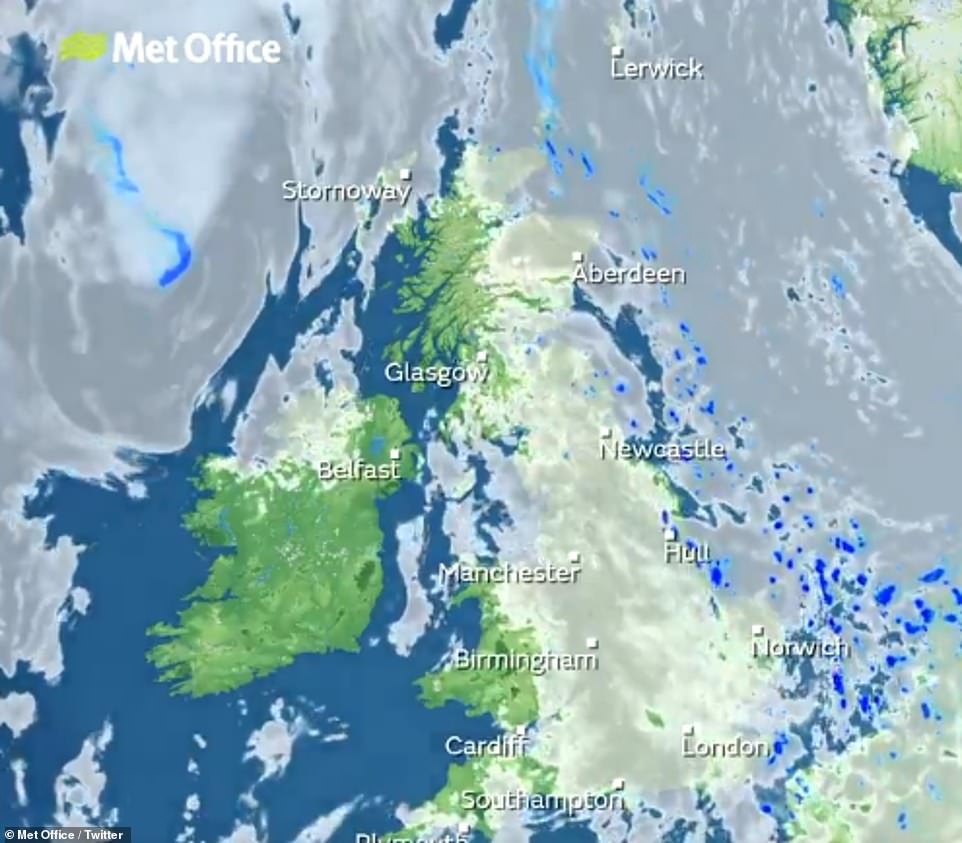 It is predicted to be driest in the southeast and although warm at first, it will cool down on Thursday.

Forecaster Helen Roberts told MailOnline that the weather across the UK will ‘gradually become more unsettled’ as the week progresses.

She said: ‘Sunday is largely settled with the rain in London clearing by around 11am and showers being the exception rather than the rule.

‘There is some low cloud which will effect the north sea coast making temperatures lower and tomorrow is also set to be largely dry with a top temperature of around 25C. 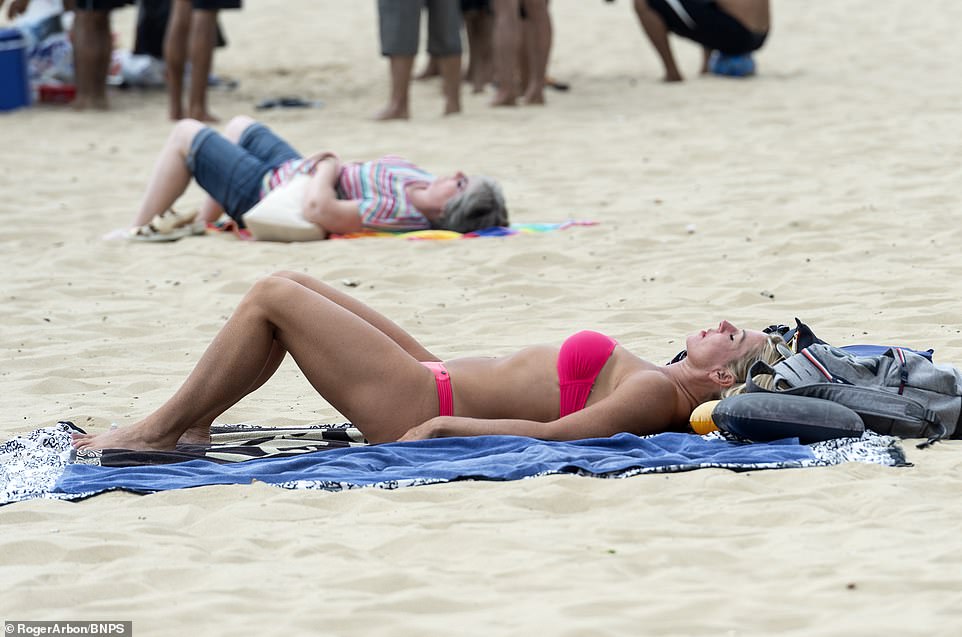 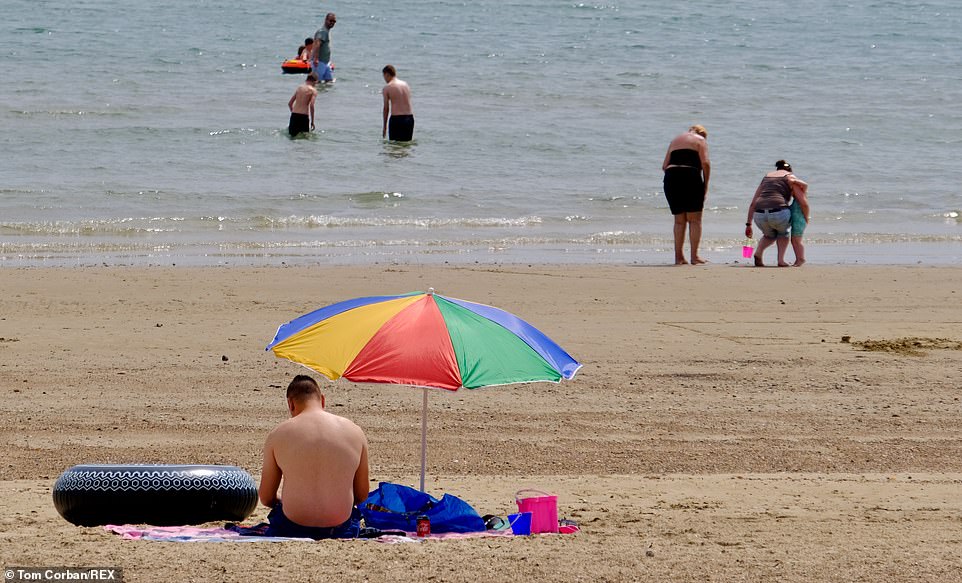 A man took a break from the sun by sitting under a small beach umbrella in Weymouth, Dorset, today, while others took a paddle in the water 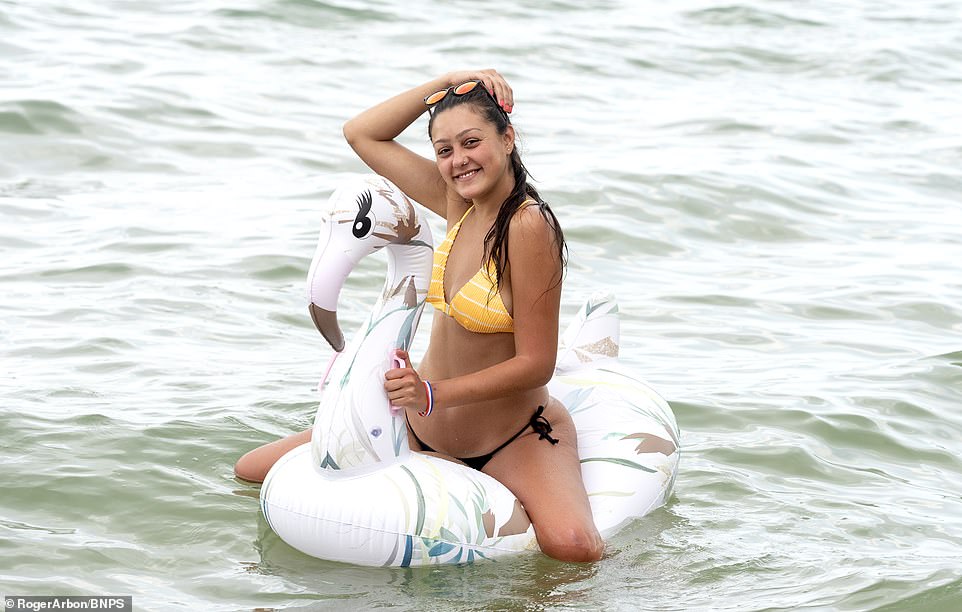 Luli Loiacona, 21, took a dip into the water with her inflatable swan at Bournemouth beach today while soaking up the rays

‘Gradually the week will become more unsettled with showers on Tuesday in Scotland and Northern Ireland but it still being dry in England and Wales with a high of 27C.

‘Thursday will see much fresher air and showers will push through meaning temperatures will drop back down to the average for this time of year.’

Usually in July the mercury sits around 22C in London and more generally across England around 21C.

Sunday’s early rain in the capital should not be taken as an indication of widespread wet weather for St Swithin’s Day on Monday. Folklore says that if it rains on July 15, it will continue for 40 days and 40 nights.

Asian hornets are so dehydrated by the heatwave they are coming out of hiding and heading to lakes, pools and even PINTS in beer gardens for water, say experts

Deadly Asian hornets are so dehydrated by the British heatwave they are coming out of hiding and heading to lakes, pools, BBQs and pints in beer gardens, experts warn.

The black and yellow striped insects, capable of killing a person with one sting, have arrived in large numbers on the island of Jersey – with 80 queens spotted this year.

Islanders have been asked to report any sightings of the species so experts can track and destroy their nests. Thirteen nests have been destroyed already in 2019 – compared to 12 last year.

But the killer hornets, which feed by biting the heads off bees and eating the rest, are coming out of their nests in the hot weather to find suitable places to collect water. 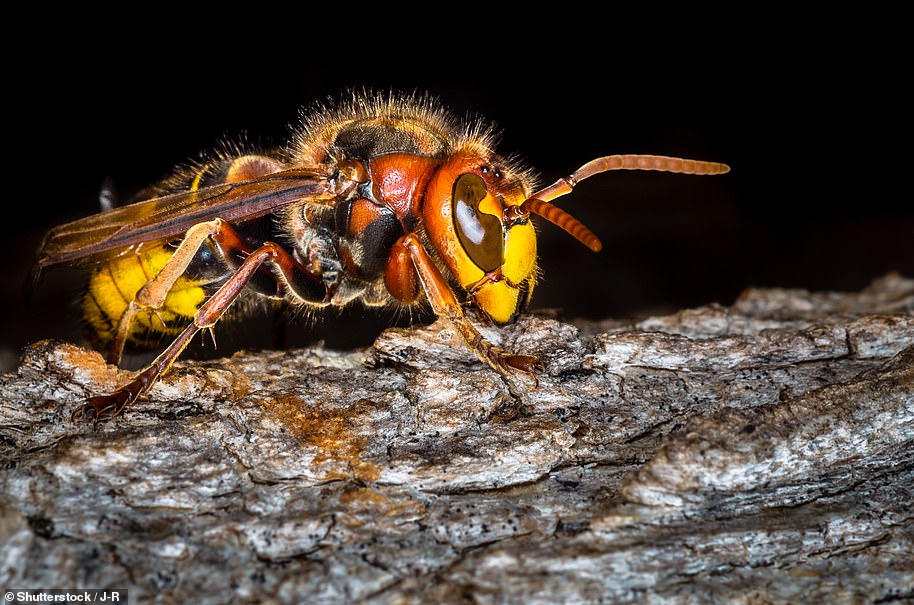 Asian Hornets, one pictured, have arrived in large numbers in Jersey – with one even being spotted hovering over a beer glass – and islanders have been asked to report any sightings

As many as 30 in one hour were recorded drinking water from the pond in St Helier, Jersey’s capital and an Asian Hornet was even photographed hovering over a pint of beer at the Mermaid Inn in Sark, a neighbouring Channel Island.

The insects – which can cause a human to go into anaphylactic shock and die if they are allergic to the venom – were also spotted eating meat from a barbecue plate in Jersey.

Francis Russell, project coordinator for the Asian Hornet Strategy in Guernsey, Channel Islands, said: ‘Water is really important for hornets as their nests are continually being expanded during the summer months.

‘The worker hornets will seek out fence panels, sheds and posts, using their jaws to collect wood shavings which they convert to papier maché by pulping it with saliva and water. This is then shaped with their mouth-parts to form the nest structure.

‘We know that hornets will be attracted to water, especially while this hot weather persists, we are encouraging everyone with a pond or water feature to have a close look during this hot weather to see if any hornets are calling in for a drink.’

Asian hornets are a threat to local wildlife and in particular honey bees. The last recorded sighting of Asian hornets on Guernsey was on June 10 when a person was trapped close to a beekeepers’ hives.