Amy Schumer was in a celebratory mood on Saturday as she got her first period since since finding out she was pregnant last year.

The actress, who struggled with severe morning sickness throughout her pregnancy, revealed her joy at the development with a collection of cute snaps kissing her husband Chris Fischer.

‘First period in a year,’ she happily captioned the album of three loved up photos showing her smooching her man on a windswept beach. 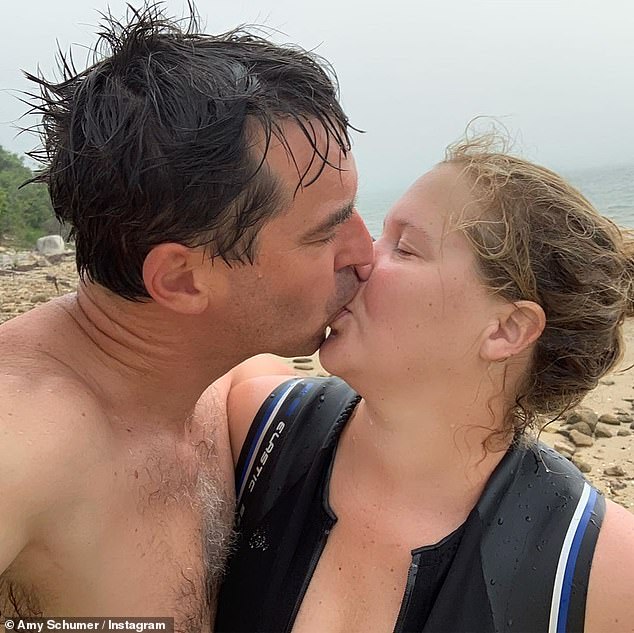 Yay! Amy Schumer celebrated getting her period back with an Instagram post kissing husband Chris Fischer on Saturday

She also added every red-colored emoji she could find as well as some tornado emojis.

Amy, 38, appears to be wearing a sleeveless wet suit in the image, unzipped enough to show a little cleavage.

Candid as ever, last week Amy posted a snap of her Caesarean section scar on her Instagram.

The comedian – who welcomed her son Gene in May – didn’t caption the image of her lower stomach but instead doodled some blonde hair and blue eyes to create a smiley face. 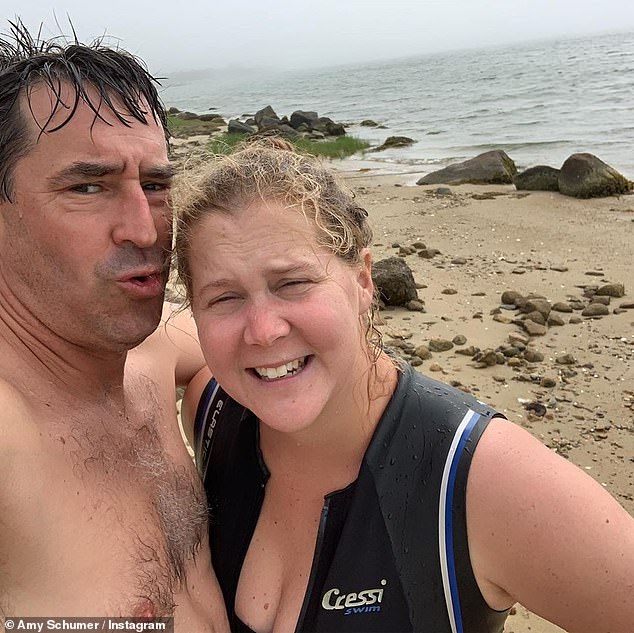 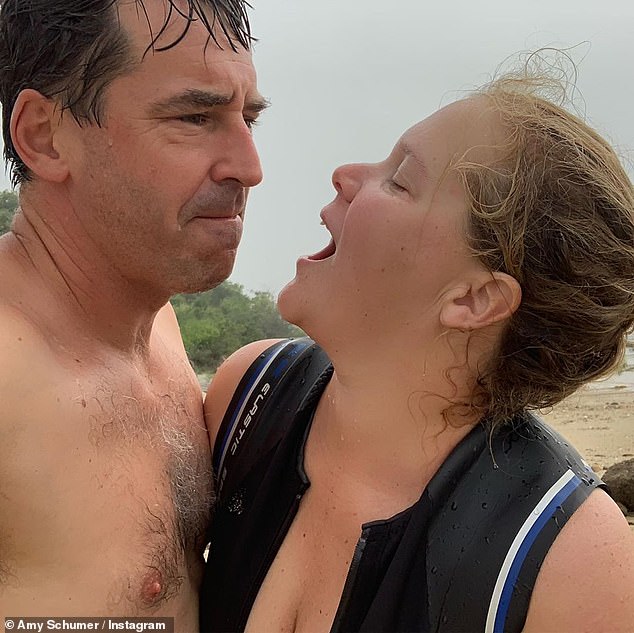 Funny gal: She also added every red-colored emoji she could find as well as some tornado emojis

Along with the revealing photo, the comedian posted a photo of of herself taking an

Gene Atell Fischer was born on May 5 – and two weeks later, Amy was back onstage, performing at the iconic Comedy Cellar in Manhattan.

It’s the first time the Trainwreck star has revealed she underwent a C-section but she spoke out soon after the birth of her baby boy to thank her doula who supported her through her difficult pregnancy and labor. 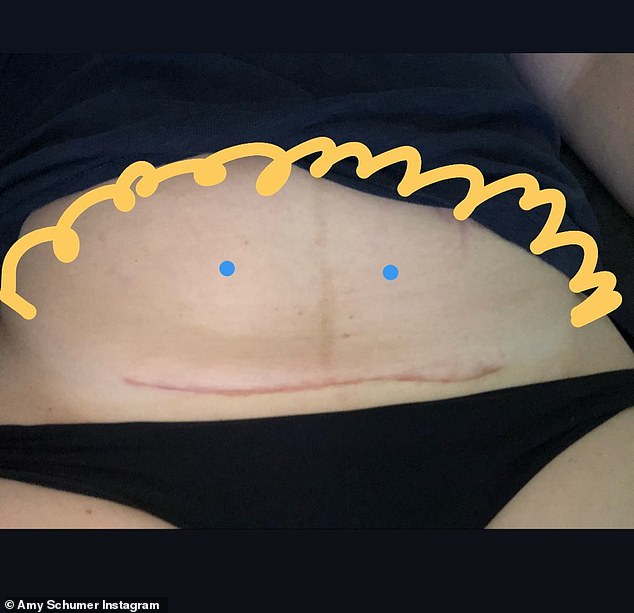 Keeping it real: The comedian displayed her C-section scar on Instagram stories on Thursday 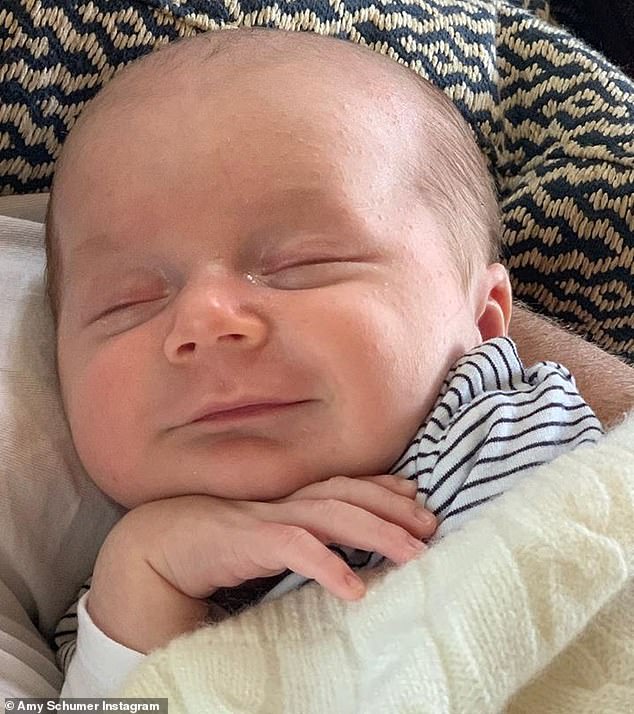 Too cute: Over the weekend Amy uploaded a sweet Instagram snap of her happily snoozing newborn

She wrote in an Instagram post: ‘Ok here’s my post baby annoying post and my takeaway from pregnancy. Women are the sh**. Men are cool and whatever but women are f***ing warriors and capable of anything.

‘I was lucky enough to get to have a doula. Her name @domino_kirke @carriagehousebirth what do doulas do? I don’t totally know But what she did was make me and Chris feel totally secure and supported throughout my pregnancy and the birth process. I really recommend getting one if you can.’ she added.

‘Friends I’ve had for 30 years or people who encouraged me to ‘keep going’ or telling me ‘it will be worth it’. Thank you. Every woman I encountered is so willing to help and advise you and I felt all their strength. And you were right. Thank you ladies from my family. Chris, Gene and of course Tatiana #titsleaking #wearingadiaper.’ 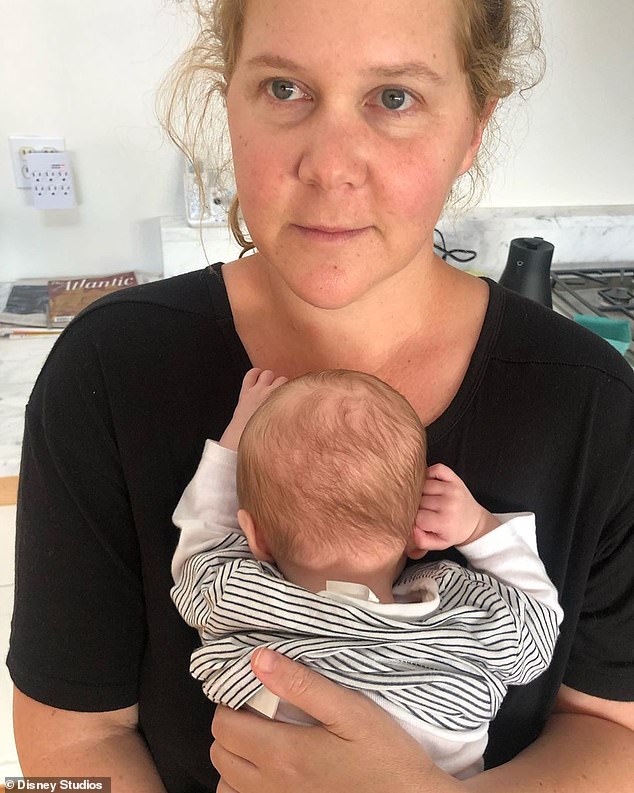 First time mom: Gene Atell Fischer was born on May 5

Amy was candid on social media about the health issues she underwent during her pregnancy as a result of hyperemesis gravidarum.

Hyperemesis is an acute form of pregnancy-related nausea, and in Amy’s case grew so severe that she at one point had to be hospitalized.

Her illness required her to cancel some tour dates as well, but she did manage to film a Netflix special whilst pregnant entitled Growing.

‘I did Pilates with strong women and went for walks. I threw up violently and felt sick mostly every day of my pregnancy. Hyperemesis is real and it’s awful. But f***, what they say is true. The second you give birth it’s gone,’ she said soon after giving birth.

CBB: Roxanne Pallett 'set to RETURN to screens on Celebrity Coach Trip'
Vicky Pattison displays her sensational figure in white swimsuit
Jennifer Lawrence dazzles in pared-back Dior shoot
Claudia Schiffer embraces boho chic in a floral maxi dress as she steps out in New York
Ines Basic takes a swipe at Eden Dally as Cyrell Paule and Elizabeth Sobinoff feud
Kourtney Kardashian is seen for the first time since getting back together with ex-Younes Bendjima
Ricky Whittle goes from Hollyoaks to Hollywood as he drops cool $1.5million on a lavish LA property
Brian McFadden is set to marry for a third time as he announces his engagement to Danielle Parkinson