She recently returned from a sun-soaked getaway in Majorca with husband Michael Douglas.

And Catherine Zeta-Jones ensured she brought the sunshine with her as she arrived for day 12 of the 2019 Championships at the All England Lawn Tennis and Croquet Club in on Saturday.

The Hollywood star, 49, oozed glamour in a plunging floral wrap dress, which was cinched at the waist with a belted tie as she stepped out with her son Dylan, 18. 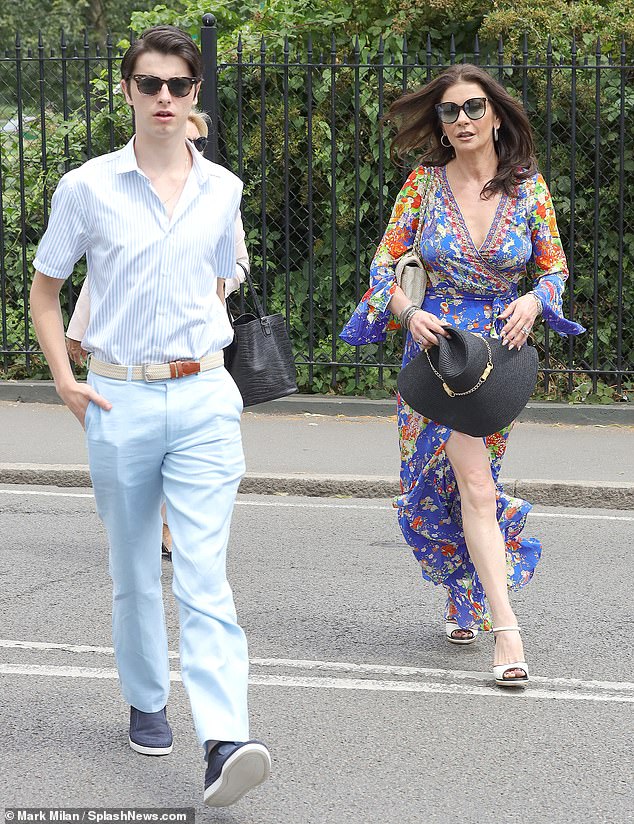 Let the games begin: Catherine Zeta-Jones arrived for day 12 of the Wimbledon 2019 Championships with her son Dylan, 18

The actress teamed her summery attire with a pair of white platform heels and a swanky cream handbag over her shoulder.

Sheltering her eyes with a large pair of black sunglasses, Catherine let her dark locks cascade down her shoulders as she walked with her son.

The film star accessorised her look with a pair of silver hooped earrings and a black beach hat that boasted a gold chain around the top. 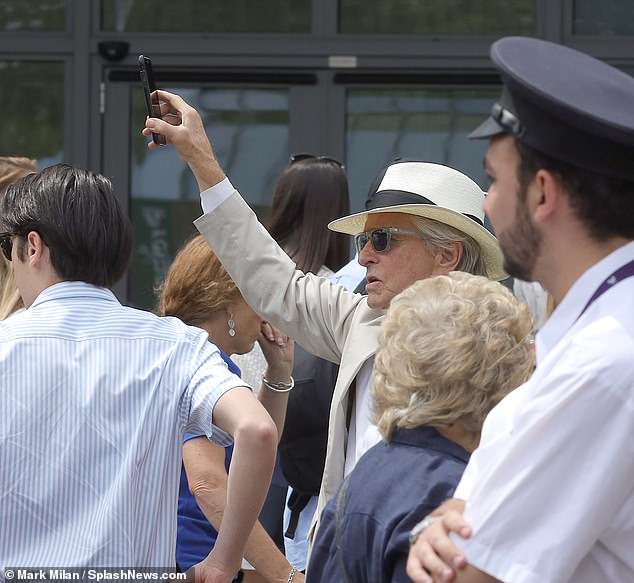 Hollywood star: Joining his family inside the grounds of the iconic venue was Basic Instinct star Michael Douglas, 74

At the tennis: Catherine (left) oozed glamour in a plunging floral wrap dress, which was cinched at the waist with a belted tie while Michael donned a cream jacket and trousers 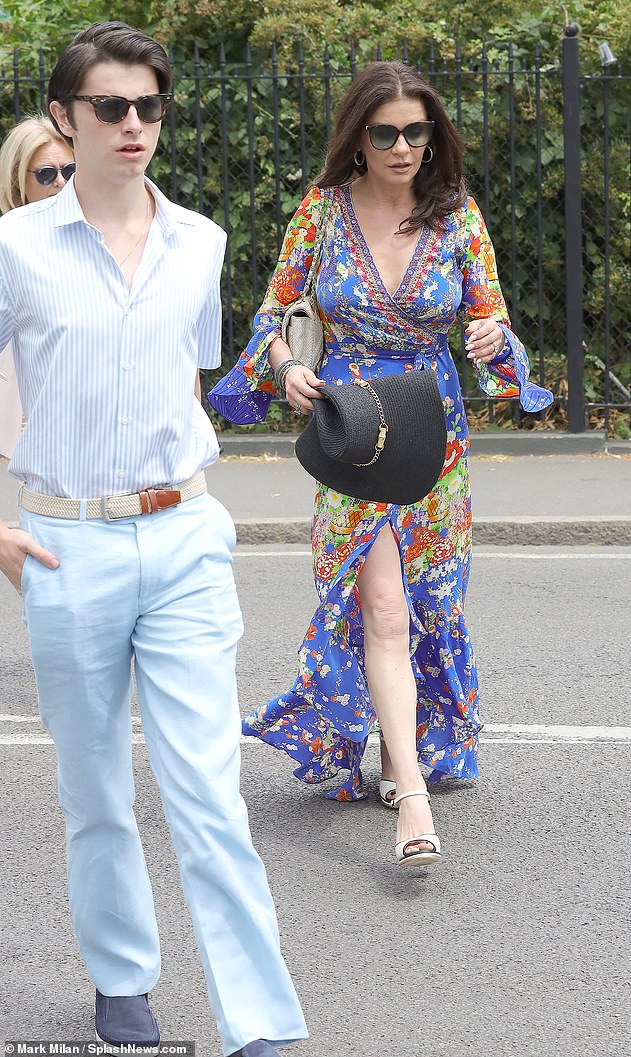 Mother and son: Joining his mum and dad at Centre Court was son Dylan who donned a white striped shirt and a pair of pale blue trousers 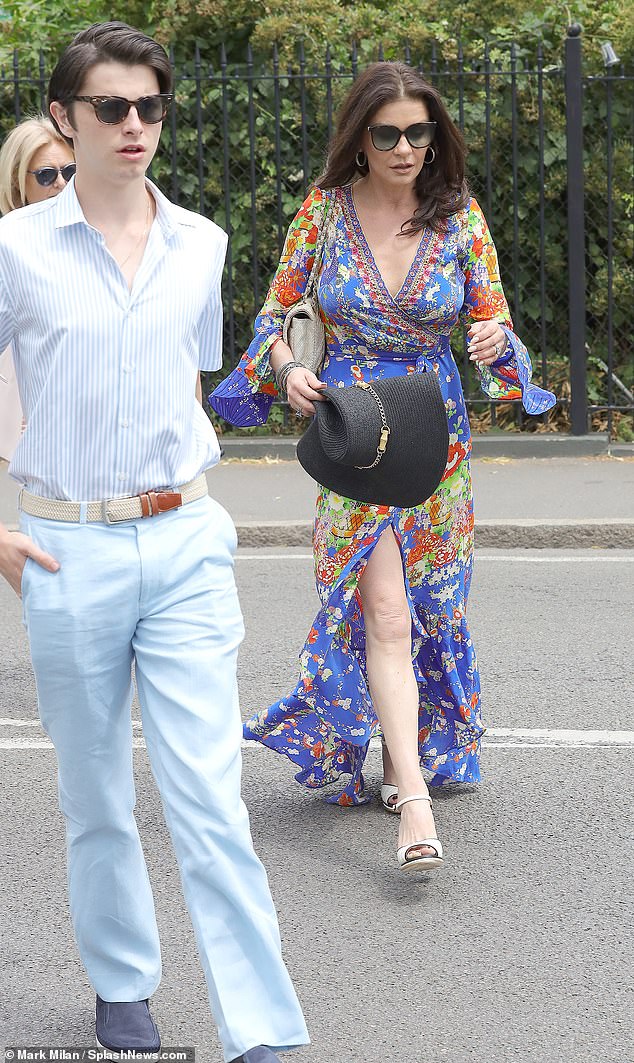 Shop it at NET-A-PORTER now!

Most dress in their ‘Wimbledon Whites’ to attend tennis at SW19, not Catherine Zeta Jones though!

Going for bold, Catherine opted for a bright blue floral number by Camilla, a brand we first spotted on Beyonce last year, and have seen on everyone from Hailey Baldwin to Vanessa Hudgens, since.

We love the wrap style, vibrant ‘Playing Koi’ motif, fluted cuffs and embroidered neckline. Catherine’s teamed hers with white heel sandals and a black wide brim hat for her day out at Wimbledon but we think it will look just as good with a pair of flipflops for the beach.

Want the look for less? Then head to the edit below to find the best of the rest from Band of Gypsies, Diane Von Furstenberg, Influence and V by Very.

Joining his mum at Centre Court was son Dylan who donned a white striped shirt and a pair of pale blue trousers.

Dylan, who styled his dark locks with a side parting, completed his look with a cream belt and a pair of stylish shades.

Joining his family inside the grounds of the iconic venue was Basic Instinct star Michael Douglas, 74, who sported a slick white shirt underneath a cream jacket. 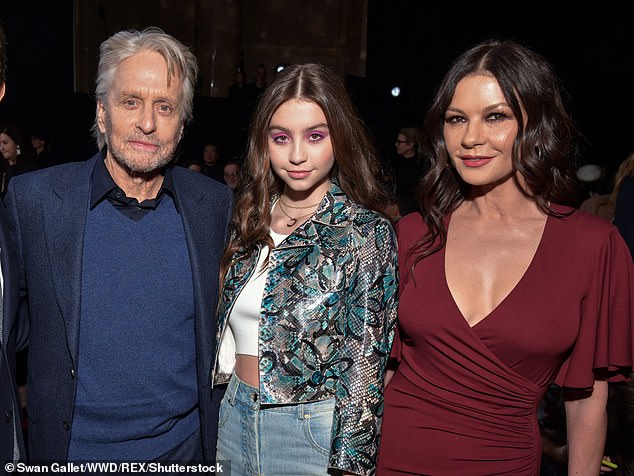 Stylish: Catherine and Michael, who also share daughter Carys (centre), 16, together, are set to celebrate their 19-year wedding anniversary in November (pictured in February)

The actor, who sheltered his eyes with a pair of sunglasses and a beige straw hat, teamed his ensemble with a pair of cream trousers and swanky white shoes as he arrived for the annual tennis games in the capital.

Catherine and Michael, who also share daughter Carys Zeta Douglas, 16, together, are set to celebrate their 19-year wedding anniversary in November.

Michael recently discussed his marriage to Catherine after winning Best Actor – Television Series Musical or Comedy for his work in The Kominsky Method at the Golden Globe Awards.

He explained: ‘I think the fact that we’re in the same industry really helps us to understand what is going on.’

He added: ‘It was great for her to be here tonight and to share one of those nice things where your partner totally understands what’s going on.’ 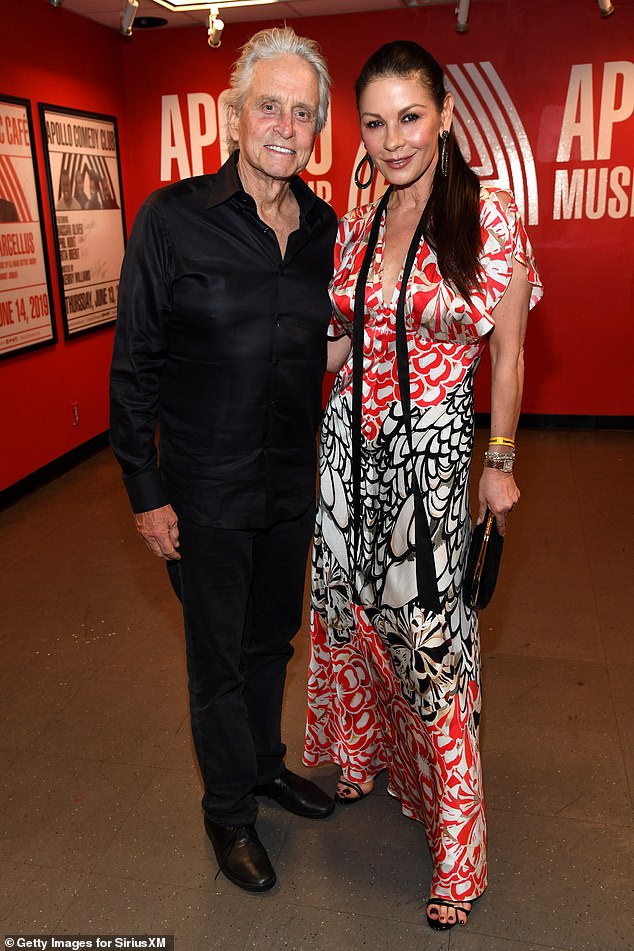 Hollywood couple: Michael recently discussed his marriage to Catherine after winning Best Actor – Television Series Musical or Comedy for his work in The Kominsky Method (pictured in June)

Hurricane Florence could poison North Carolina's water with manure, ash and radiation
Le Grand Diversion! Paris is burning and Macron’s popularity is plunging
Man who was denied 'sexual favors' in a Queens massage parlor assaults staff and robs a piggy bank
Five new secure units for autistic patients set to open in the UK... despite pledge to close them
Theresa May refused to take part in US operation to protect ships in the gulf
Cub pulls off a dance reminiscent of Jungle Book's Bare Necessities as his mom watches in Alaska
Abigail Disney launches Twitter rant at her peers for being 'easily triggered' by phrase 'OK Boomer'
Inmate is DENIED a new trial in a 1985 slaying despite his co-defendant confessing to the killing