New Yorkers crowded the city’s already busy streets on Friday evening to catch of glimpse of the year’s second – and final – Manhattanhenge.

The term, coined by astrophysicist Neil deGrasse Tyson in 2002, describes a phenomenon that occurs when ‘when the setting sun aligns precisely with the Manhattan street grid, creating a radiant glow of light across Manhattan’s brick and steel canyons, simultaneously illuminating both the north and south sides of every cross street of the borough’s grid.’

Looking down the street on Friday, people were able to view a full sun hovering just above the horizon. On Saturday, there will be an almost repeat showing with a half-sun setting on the horizon around 8:15pm. 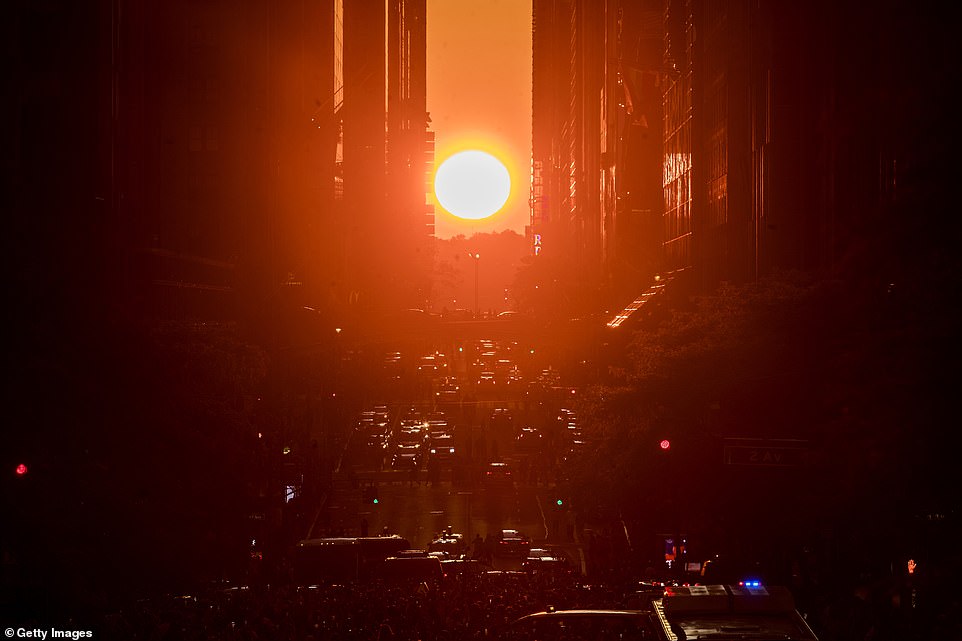 A view of the sunset from 42nd street is seen during the ‘Manhattanhenge’ on Friday July 12, 2019 in New York 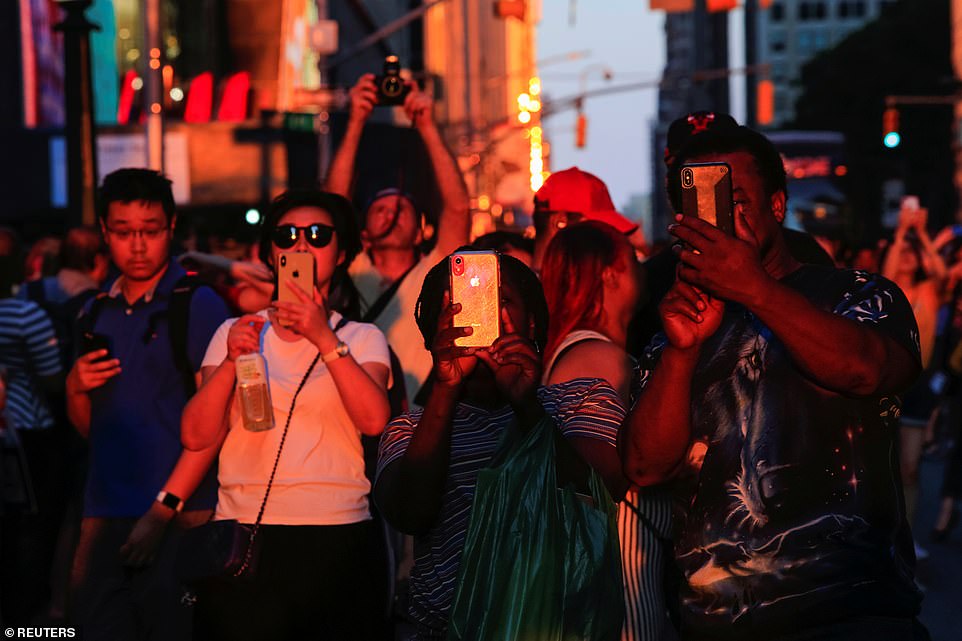 People take pictures of the sun setting over Manhattan aligned exactly with the streets in a phenomenon known as Manhattanhenge, in Times Square 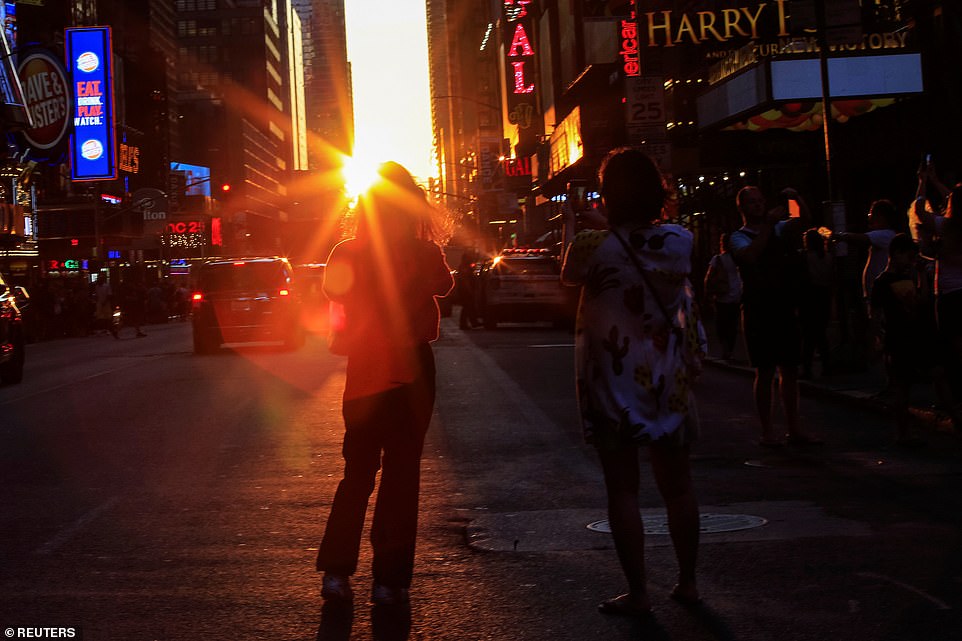 Coined by astrophysicist Neil deGrasse Tyson, the phenomenon occurs twice a year, when the setting sun aligns itself with the east-west grid of streets in Manhattan 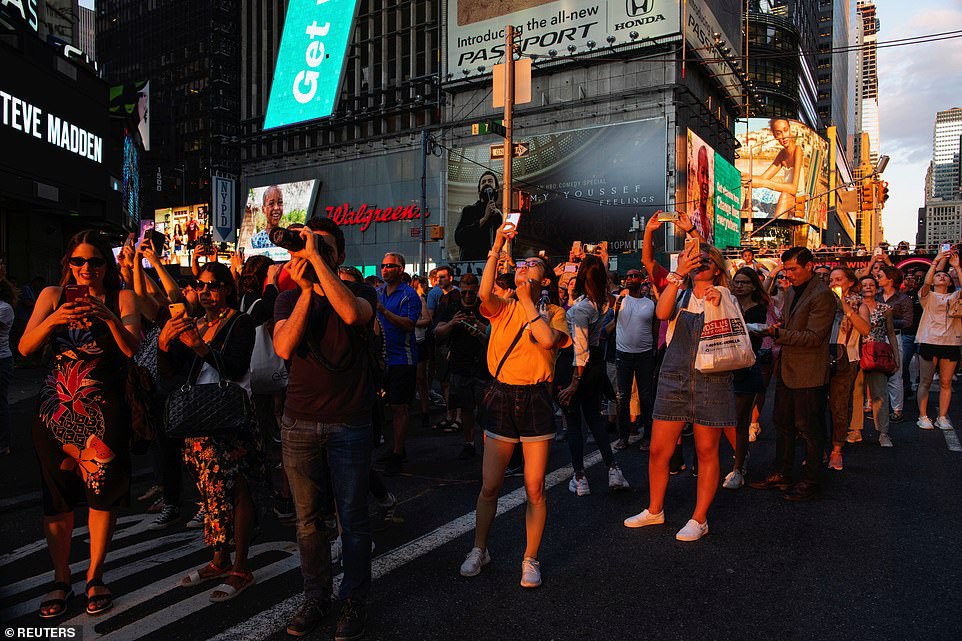 The streets of Manhattan follow the Commissioners’ Plan of 1811 which laid out a grid that is offset 28.9 degrees from true east-west.

Had the grid been set directly on the east-west line, the phenomenon would coincide with the spring and autumn equinoxes, just like Stonehenge in England.

DeGrasse Tyson explains: ‘In spite of what pop-culture tells you, the sun rises due east and sets due west only twice per year on the equinoxes – the first day of spring and of autumn. Every other day, the sun rises and sets elsewhere on the horizon. 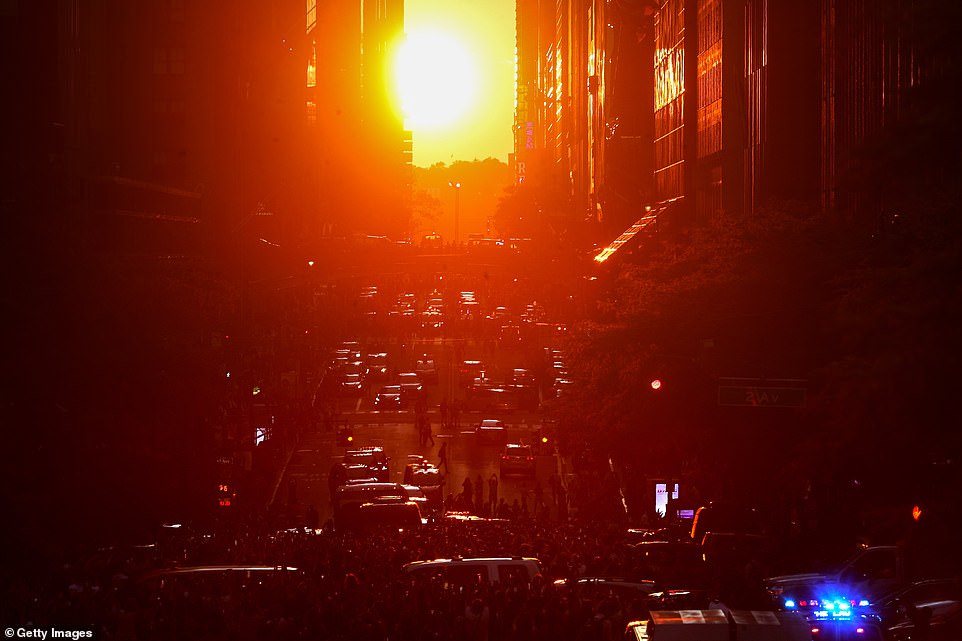 Manhattanhenge occurs when the setting sun aligns itself with the east-west grid of streets in Manhattan, allowing the sun to shine down all streets at the same time 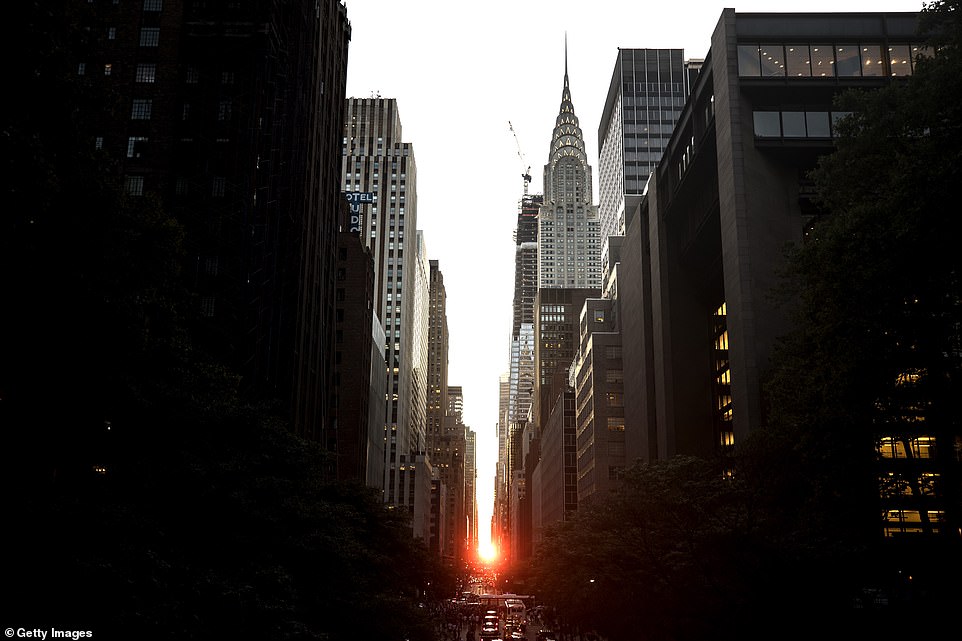 The phenomenon occurs in Manhattan due to a clear view to the horizon beyond the grid – across the Hudson River to New Jersey – as well as the tall buildings that line the streets, creating a vertical canyon with which to frame the sun 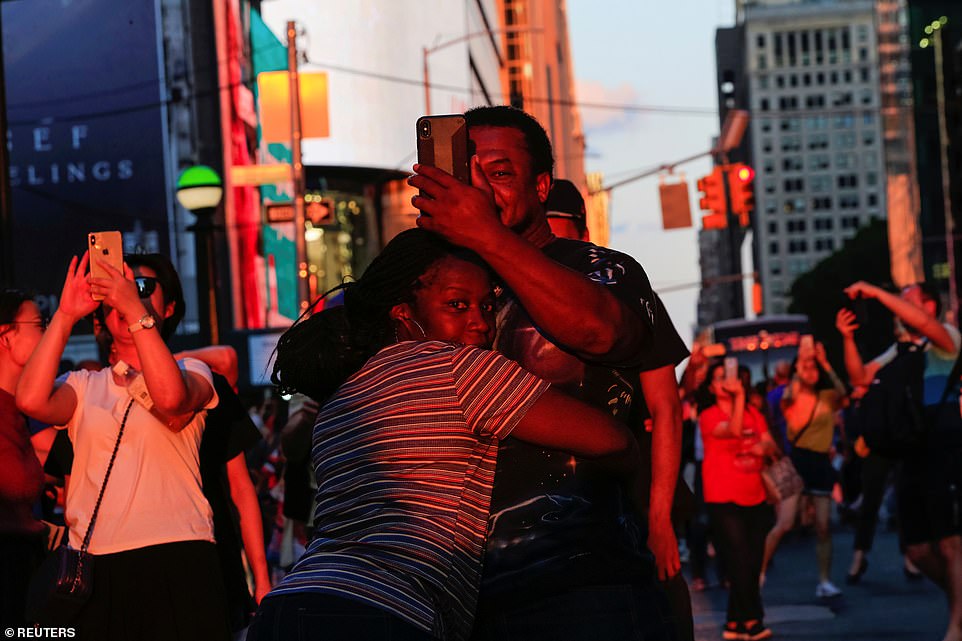 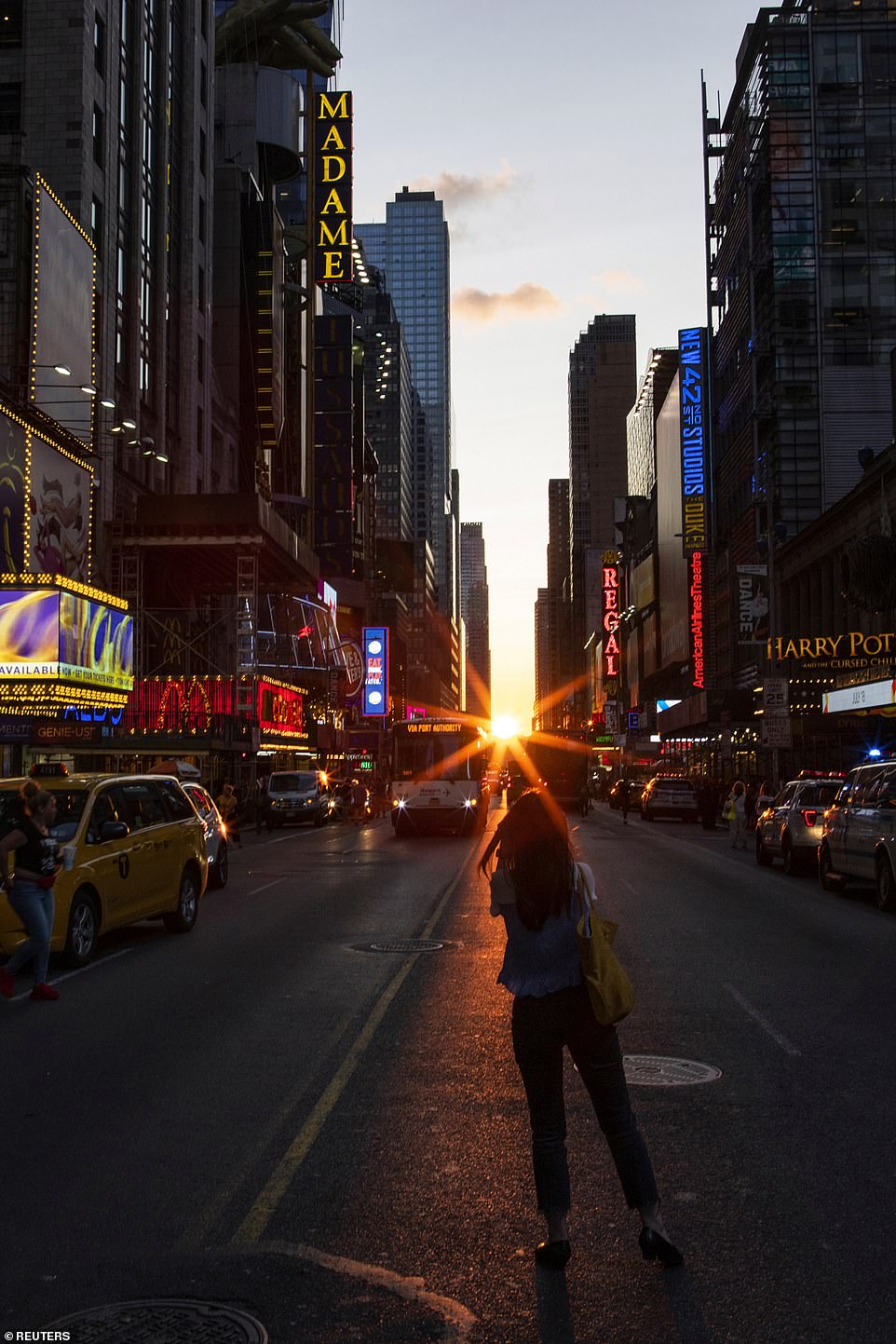 Manhattanhenge, pictured here at 42nd Street, happens twice each year when the sun aligns with the east/west streets of the main street grid in the New York borough 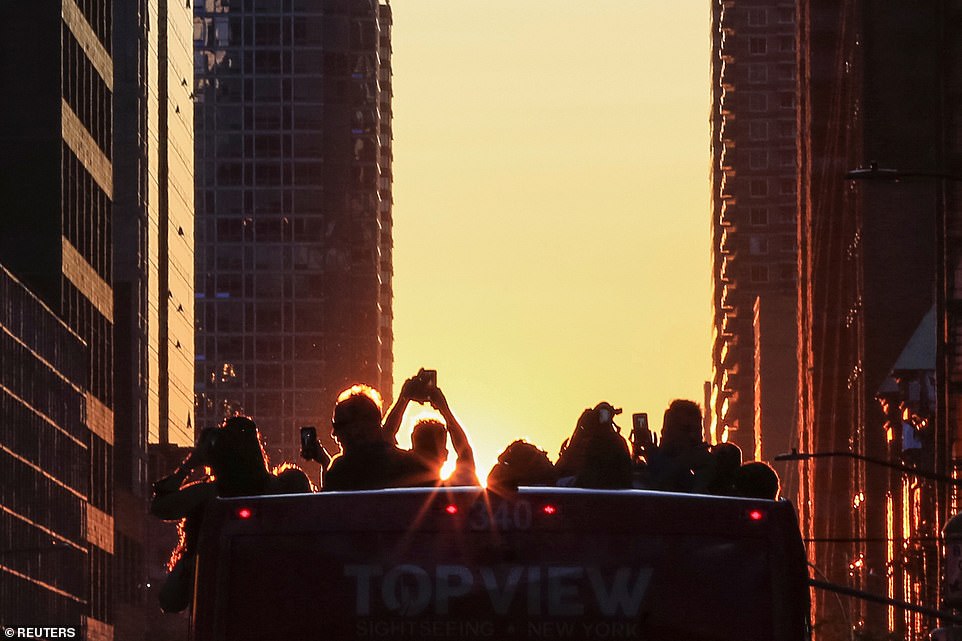 He explains that the reason the unique urban phenomenon occurs in Manhattan is due to a clear view of the horizon beyond the grid-like streets across the Hudson River to New Jersey.

The view, combined with the tall buildings which line the streets, creates a vertical channel to frame the sun and thus a rare and striking photographic opportunity.

To get the best view of this rare and beautiful sight, sun worshippers need to be as far east in Manhattan as possible and look west across the avenues. 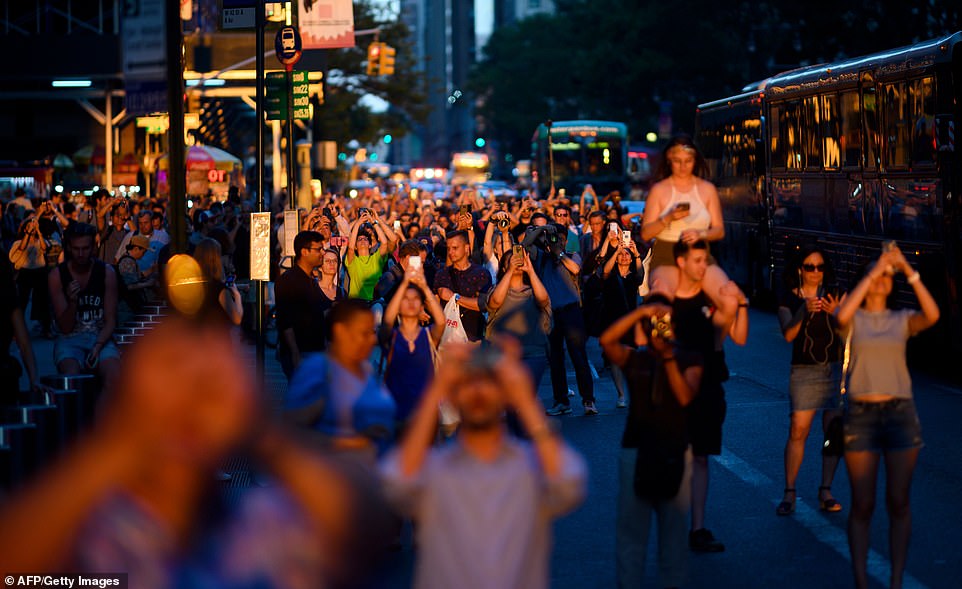 Manhattanhenge happens twice each year, when when the sun rises or sets in New York City parallel to the city street grid in Manhattan 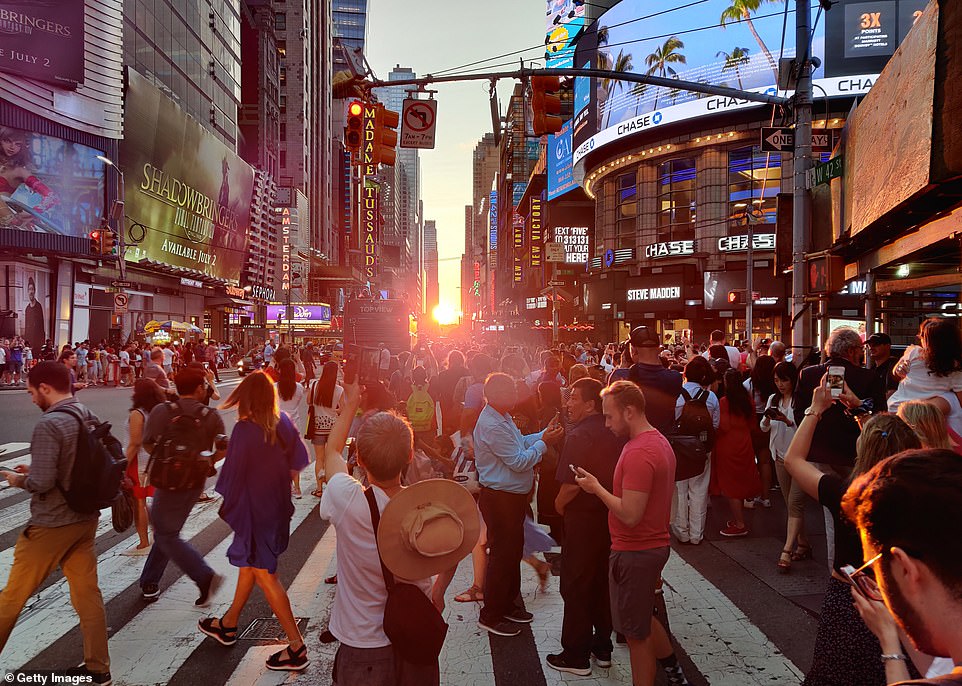 The city that never sleeps was bathed in a golden glow. Occurring twice a year for 15 minutes, the sun appears to sets in the center of the street 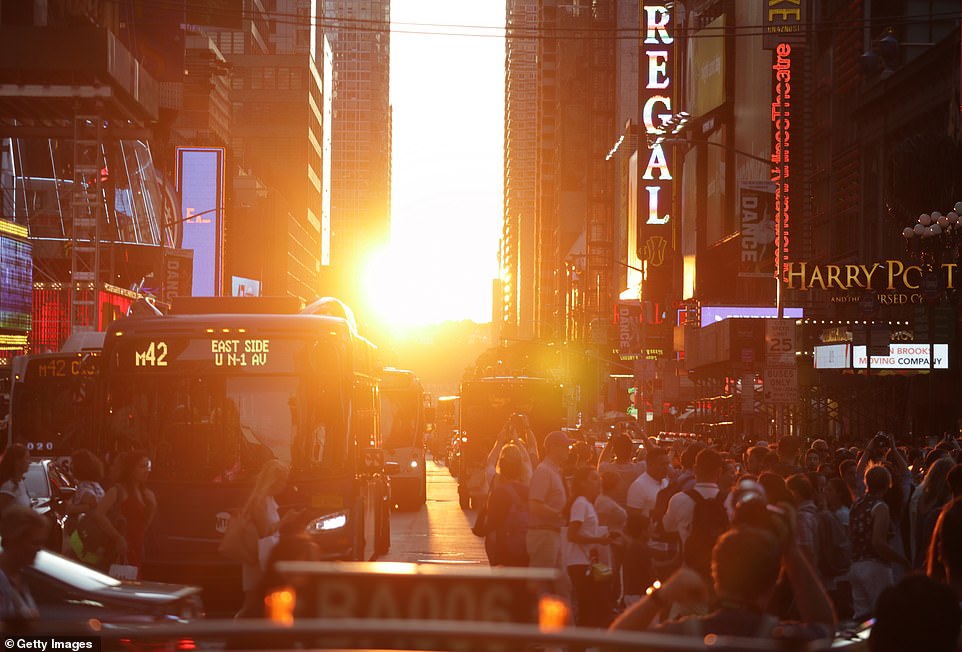 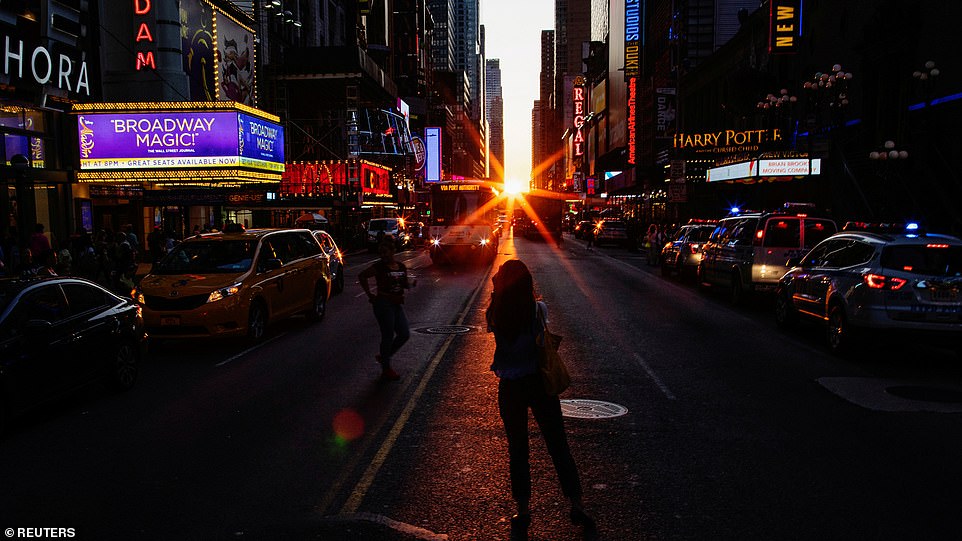 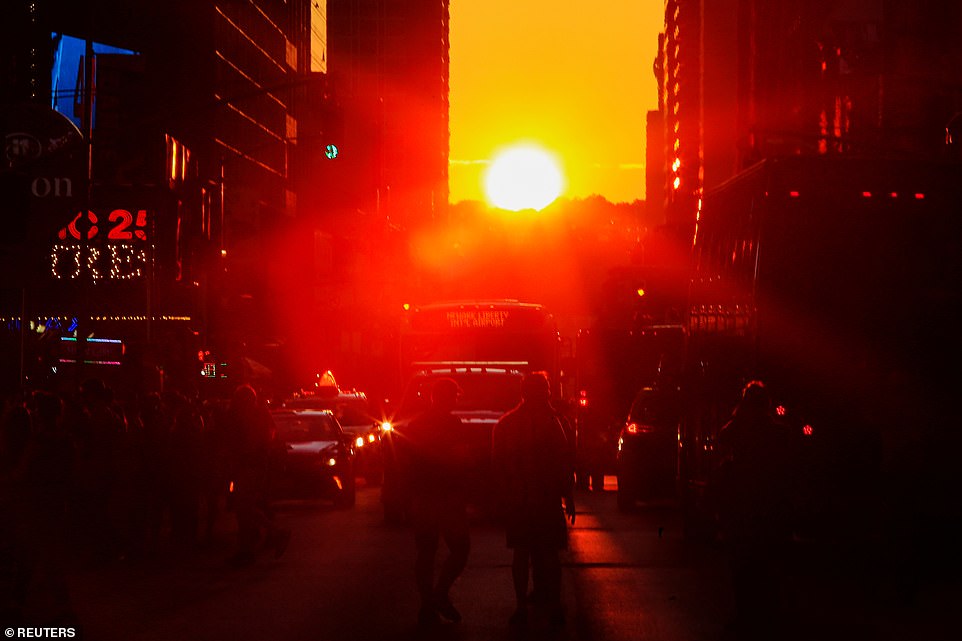 Those that turned out on Friday evening were treated to a stunning sunset that illuminated New York’s busy streets in shades of red, orange and gold