Millions of residents braced for Tropical Storm Barry Heavy on Saturday morning as heavy rainfall and gusty winds knocked out power along much of the Gulf Coast.

Officials predicted Barry would make landfall as this year’s first hurricane near Morgan City, west of New Orleans, where a curfew had been set until 6 am.

A long day began with on and off rain, power outages and people using cellphones to see in the dark and opening doors and windows to let the warm, sticky tropical air circulate.

The large storm system is currently bringing heavy rains, a potential storm surge and flooding that pose a threat reminiscent of 2005’s deadly Hurricane Katrina, which is testing extreme weather defenses installed by authorities at the time. 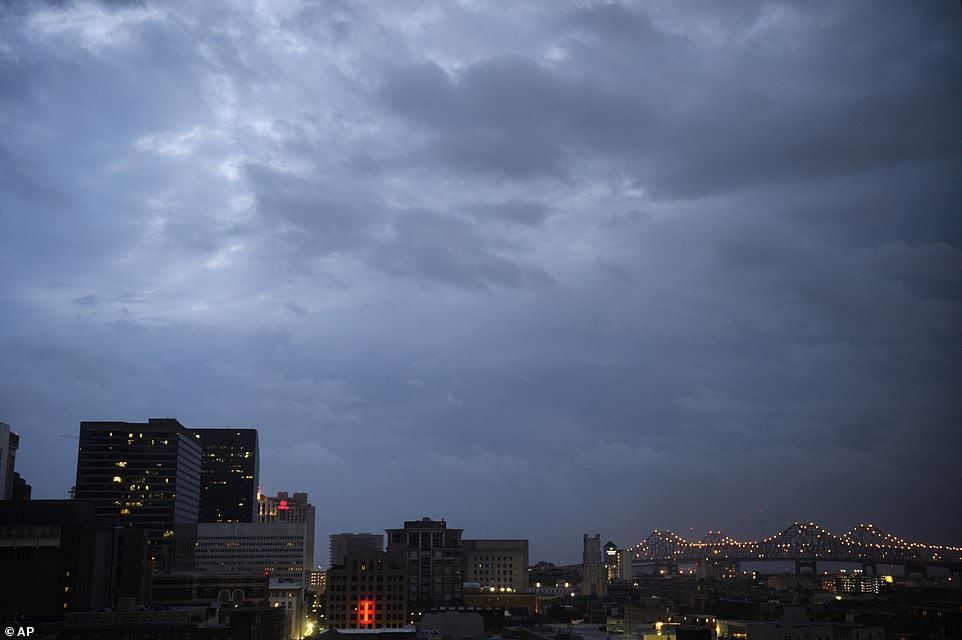 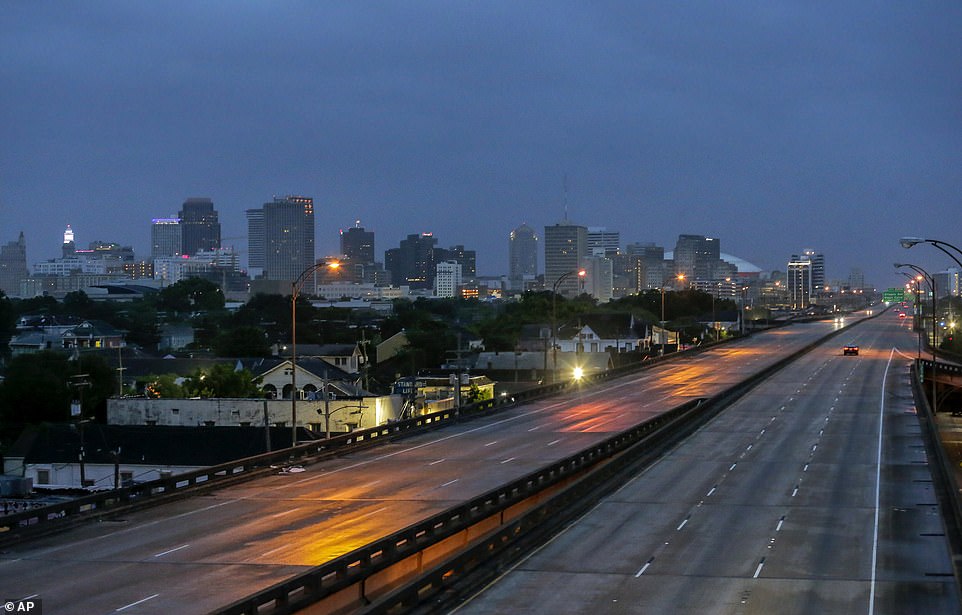 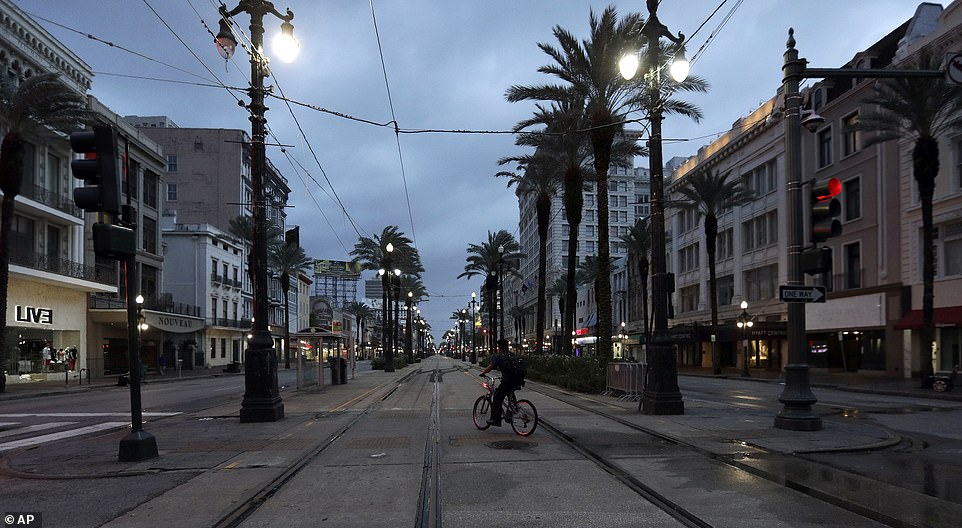 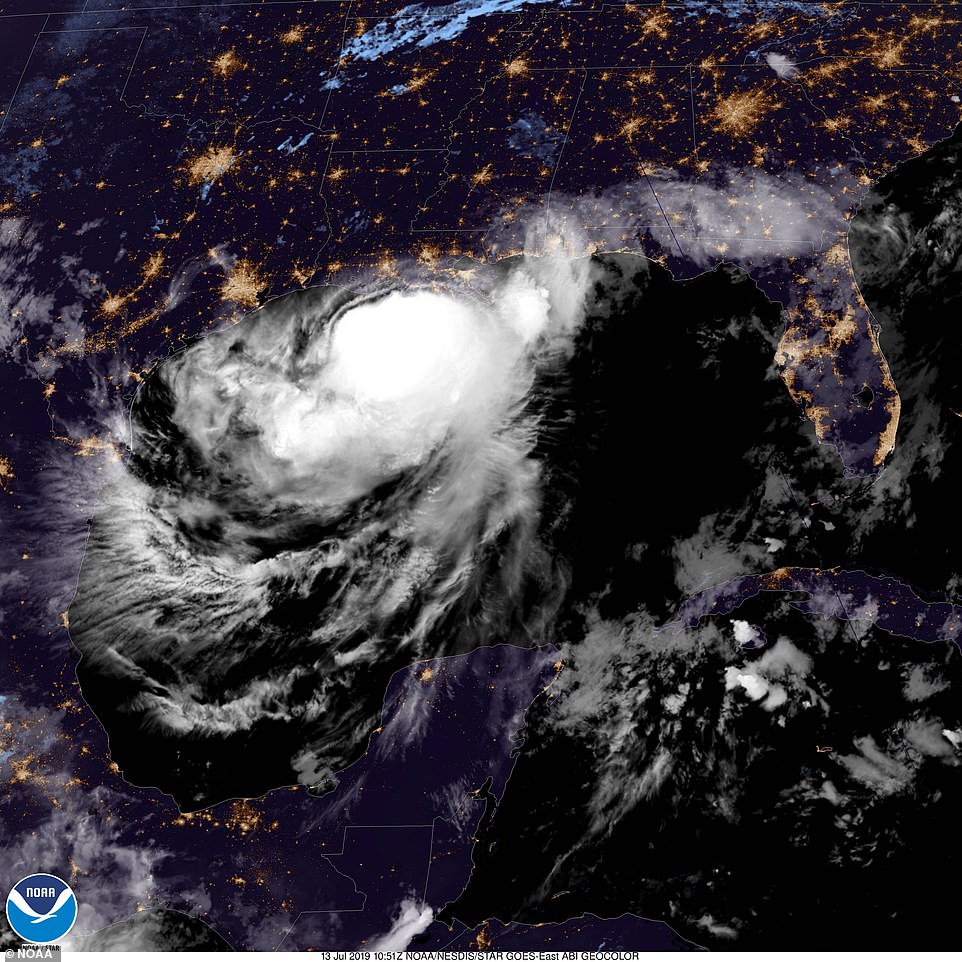 Heavy rains and gusty winds knocked out power on the Gulf Coast as a strengthening Tropical Storm Barry churned a path to shore on Saturday morning. The edges of the storm lashed Louisiana and coastal Mississippi and Alabama with rain Saturday

Rain bands were already hitting the coast before sunrise, and more than 56,000 homes and businesses in Louisiana were without power, according to tracking site PowerOutage.us.

The edges of the storm lashed Louisiana and coastal Mississippi and Alabama with rain, leaving some roads underwater overnight.

Though expected to be a weak hurricane – just barely over the 74 mph wind speed threshold – it threatened disastrous flooding across a swath of the Gulf Coast.

Landfall predictions were pushed back from sunrise to late morning or early afternoon, as the storm crawled across the Gulf Coast at about 3mph, forecasters with the National Hurricane Center said early Saturday.

The storm is expected to inflict the most damage on Louisiana and parts of Mississippi, with wind and rain affecting more than 3 million people.

Late Friday night, residents received good news from forecasters: The Mississippi River is expected to crest in New Orleans at about 17.1 feet on Monday, not 19 feet as had been earlier predicted. The levees protecting the city range from about 20 to 25 feet in height.

It was breezy, but flags on balconies overhanging the empty streets still occasionally fell limp, with a couple of motorists braving the hazardous weather conditions by driving on the roads.

Forecasters warned most of the storm’s rain remained over the Gulf of Mexico and would likely move into Louisiana and Mississippi later Saturday.

There were predictions of 10 to 20 inches of rain through Sunday across a swath of Louisiana that includes New Orleans and Baton Rouge with some parts of the state possible getting 25 inches. 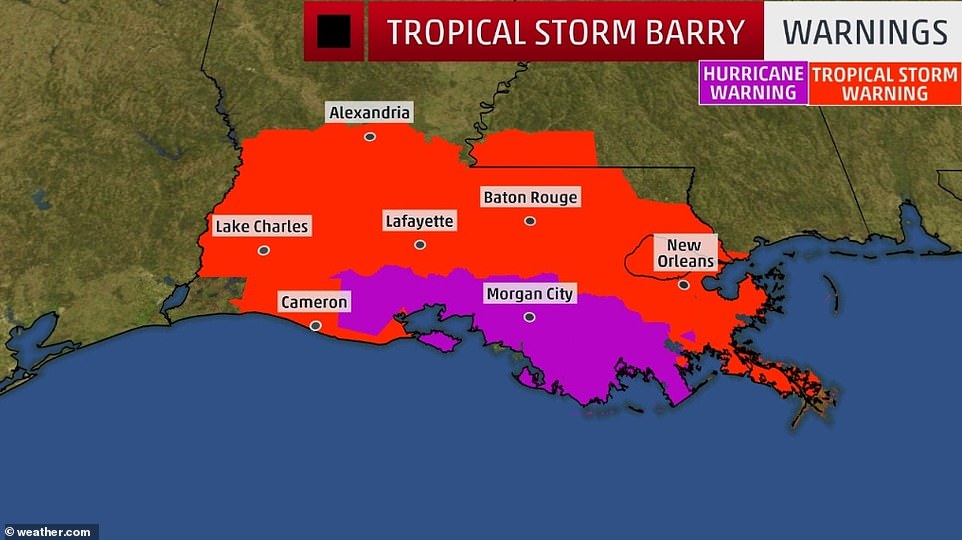 By early Saturday the storm was packing winds of 65 miles per hour, just shy of hurricane strength, and around 120 miles southwest of New Orleans, according to the National Hurricane Center 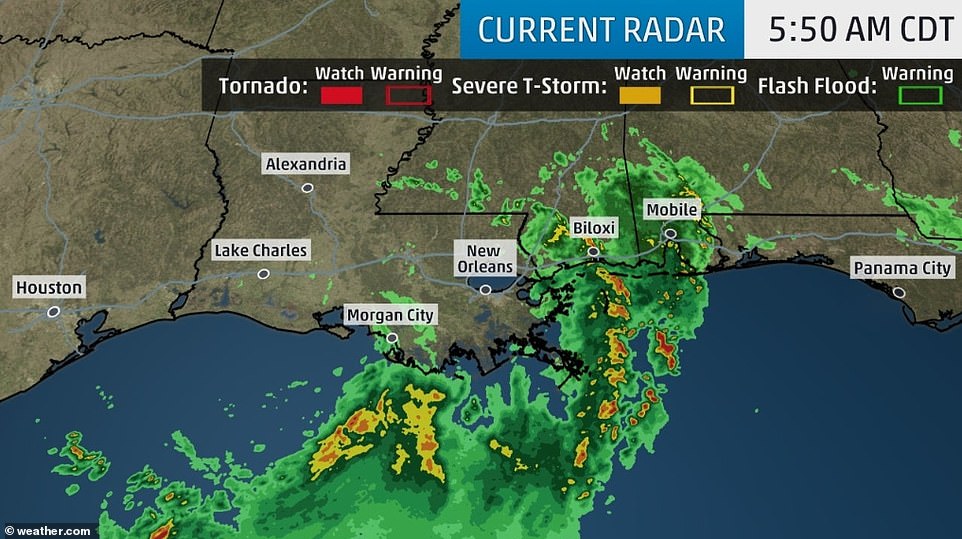 As dawn approached Saturday, more than 45,000 people in southern Louisiana had lost power. In New Orleans, thousands packed up and left their homes as flood waters hit low-lying areas like Plaquemines Parish 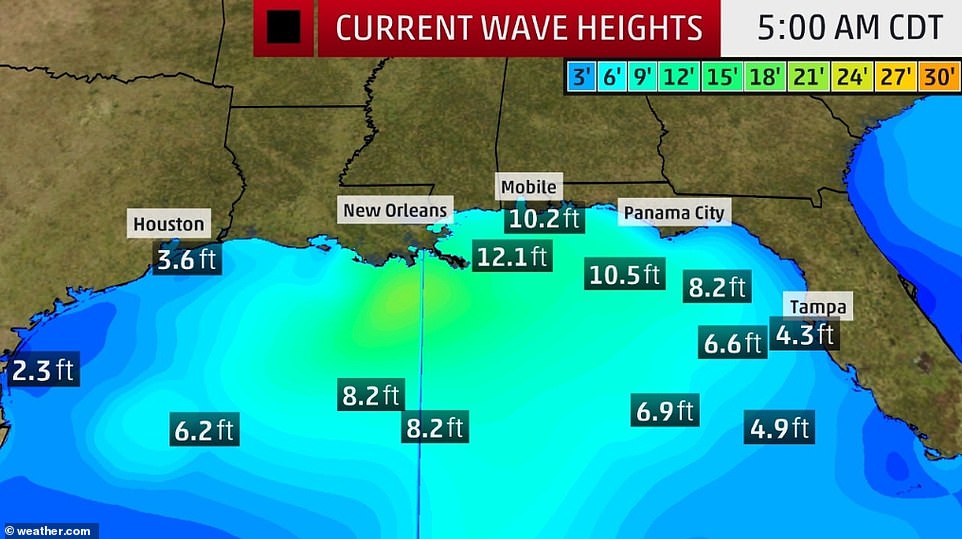 Governors declared emergencies in Louisiana and Mississippi, and authorities took unprecedented precautions in closing floodgates and raising the barriers around New Orleans.

Governor John Bel Edwards said it was the first time all floodgates were sealed in the New Orleans-area Hurricane Risk Reduction System since Katrina. Still, he said he didn’t expect the Mississippi River to spill over the levees despite water levels already running high from spring rains and melting snow upstream.

‘My concerns are just hoping it’s not going to be another Katrina,’ said Donald Wells, a restaurant cook in New Orleans.

Authorities told at least 10,000 people in exposed, low-lying areas along the Gulf Coast to leave, but no evacuations were ordered in New Orleans , where officials urged residents to “shelter in place.”

Before they did, people packed stores to stock up on bottled water, food and other essentials. 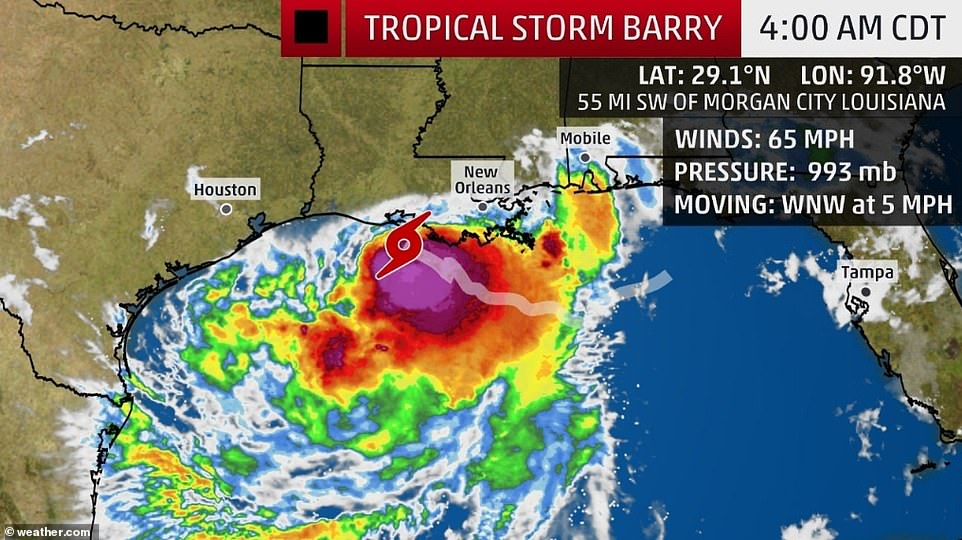 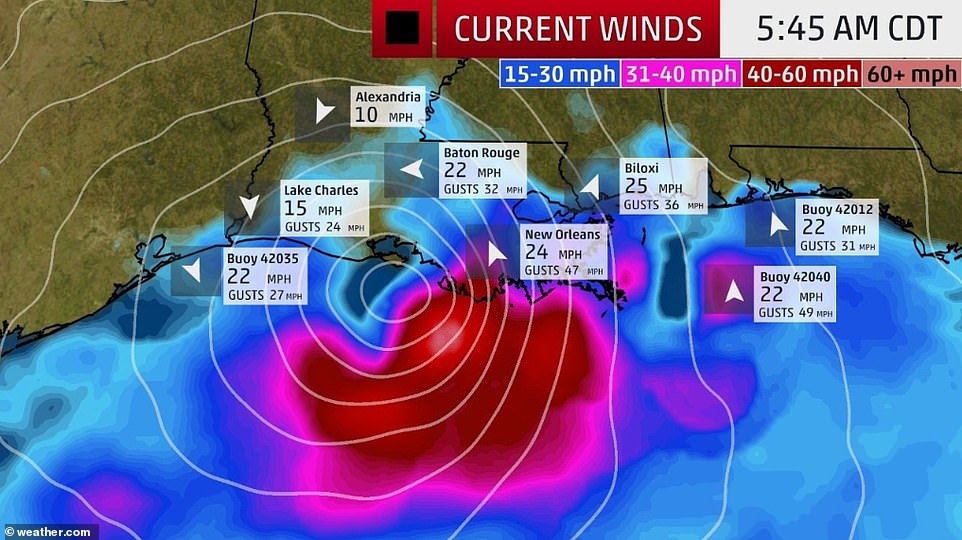 With Barry threatening massive rainfall across several southern states, federal emergency declarations were issued to help free up resources to address the storm 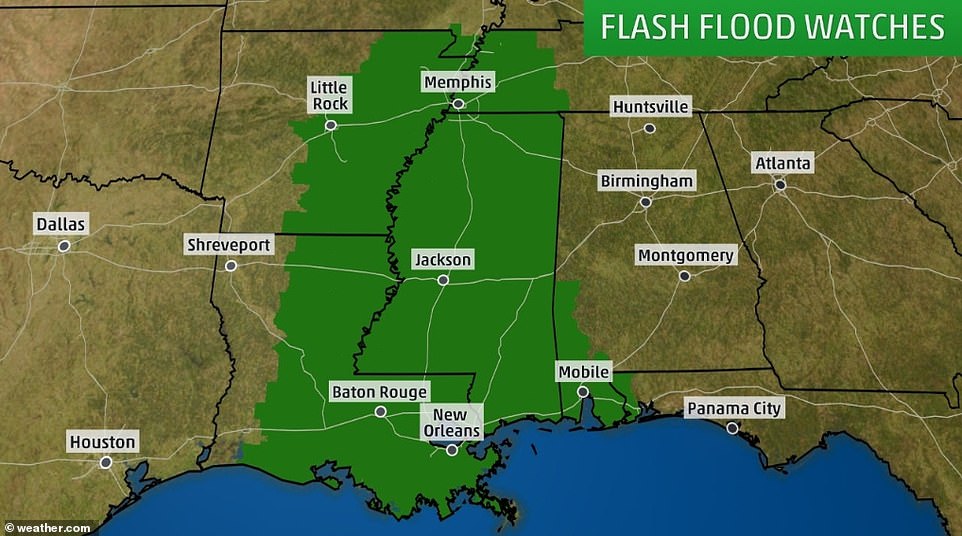 Rescue crews and about 3,000 National Guard troops were posted around Louisiana with boats and high-water vehicles

‘Stock up on water. Stock up food. Get ready for the storm – ride it out,’ he said.

At least one couple scrapped their carefully planned Saturday wedding in favor of moving up the ceremony .

‘We realized we had a marriage license, two rings … and we didn’t really want to wait any longer,’ Associated Press photographer Gerald Herbert said before marrying Lucy Sikes on Friday, before the storm hit.

Workers also shored up and raised the levee system in places with beams, sheet metal and other barriers.

Scientists say global warming is responsible for more intense and more frequent storms and flooding, but without extensive study, they cannot directly link a single weather event to the changing climate.

Before the worst of the storm, Kaci Douglas and her 15-year-old son, Juan Causey, were among dozens filling sandbags at a fire station in Baton Rouge. She planned to use them to shore up the door of her townhouse.

‘I told my son, it’s better to be safe than sorry,’ she said.

In New Orleans, a group of neighbors cleaned out the storm drains on their street. Working together to lift off the heavy metal covers, they discovered that most of the drains were full of dirt, leaves and garbage.

All over town, people parked their cars on the city’s medians – referred to by locals as “neutral grounds” – in hopes their vehicles would be safe on the slightly elevated strips.

After Katrina was blamed for more than 1,800 deaths, by some estimates, the Army Corps of Engineers began a multibillion-dollar hurricane-protection system that isn’t complete. The work included repairs and improvements to some 350 miles of levees and more than 70 pumping stations.

It is estimated that  the total damage and economic loss caused by Tropical Storm Barry will reach $8 to $10 billion. This is based on an analysis of damages expected from flooding caused by very heavy rainfall over several states and storm surge.

It is expected that there will be damage to homes and businesses, as well as their contents and cars, farm and crop losses, contamination of drinking water wells and infrastructure damage.

Mike Yenni, president of Jefferson Parish near New Orleans, said the community had taken the “unprecedented” step of closing hundreds of flood gates, largely due to the high levels of the Mississippi.

In St. John’s Parish next to New Orleans, some communities were under two or more feet of water, local television footage showed.

Grand Isle, one of the inhabited barrier islands east of the storm’s likely path, suffered a full power outage Friday which brought crucial pumping stations to a halt, authorities said.

Residents and business owners in New Orleans were laying down sand bags and boarding up windows while city officials set up shelters for residents.

In 2005, Katrina — the costliest and deadliest hurricane in US history — submerged about 80 percent of New Orleans, causing some 1,800 deaths and more than $150 billion in damage.

The city’s main sports arena, the Superdome, was turned into an emergency shelter during Katrina. The facility was due to host a concert by the Rolling Stones on Sunday, but it was postponed by a day due to Barry.

‘We’re here with you — we’ll get through this together,’ the band said in a statement.