One of the Seven Natural Wonders of the World and a UNESCO World Heritage Site, the Grand Canyon this year celebrates the centenary of its designation as a National Park.

Planning is essential to experience the Grand Canyon. After all, there are three different areas to visit — the North, South and West Rims — and they are many miles apart. 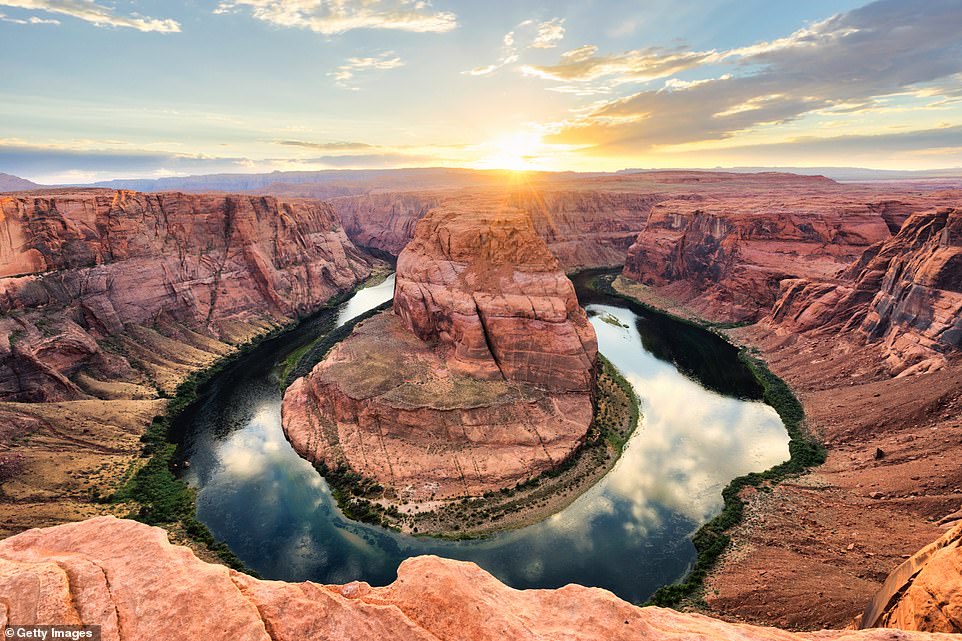 Tourists must plan their visit as there are three different areas to see – the North, South and West Rims – and they are many miles apart

First, you need to pick the rim that you favour, as each has individual attractions and it’s not a simple task to hop from one side to the other.

The South and North Rims may be just ten miles apart as the crow flies, but driving between them involves a journey of 215 miles and takes almost five hours.

The South Rim is the most popular because it features the iconic views many consider to be the ‘true Grand Canyon’ and is the most accessible of the three rims.

Open all year, the South Rim offers accommodation in hotels, lodges, cabins or campsites either at the Grand Canyon Village in the National Park itself, or in the nearby towns of Tusayan and Williams, where there are properties and restaurants to suit all pockets. 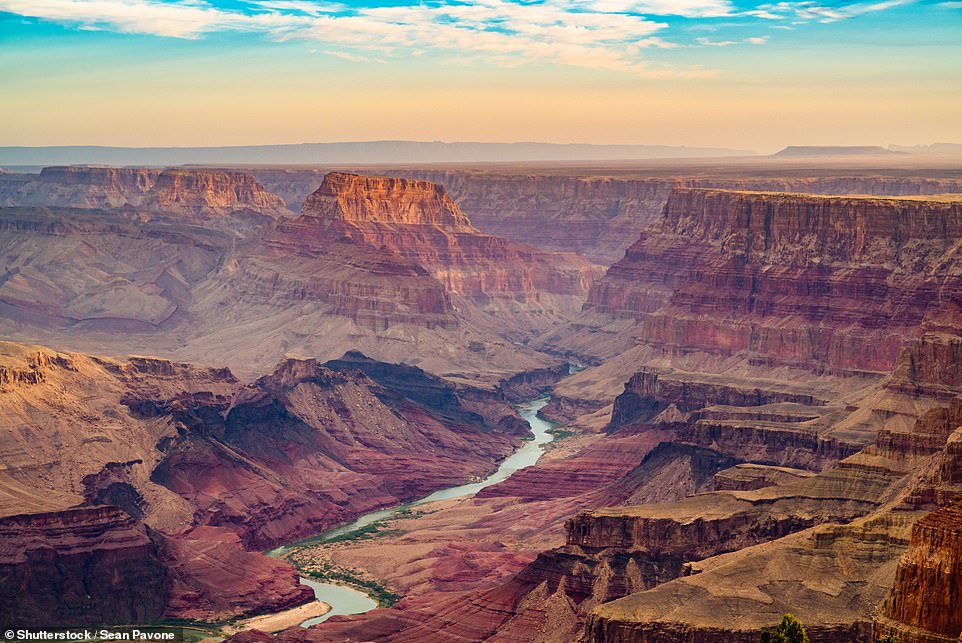 1. A scenic helicopter flight is worth every cent of the sky-high fare. I took the Canyon Spirit tour with Maverick Helicopters, a 50-minute, stomach-flipping flight from the South Rim. Priced from £238, visit FlyMaverick.com

2. It’s a once-in-a-lifetime trip to join a mule train from the South Rim down giddily narrow and steep switchbacks for a one or two-night stay at Phantom Ranch on the canyon floor.

The trek is highly oversubscribed and only ten riders selected by lottery can saddle up at any one time. I opted for the easier-to-book Vista mule ride along the rim. Priced £114 pp for a half-day or from £477 pp overnight (or £840 for two), visit .

3. The three-hour Hermit Road guided cycling tour ends at Hermit’s Rest, one of the buildings designed by Mary Jane Colter for early tourists in 1914. Priced £52 for adults, £37 for children, book at Bright Angel Bicycles & Cafe at Mather Point or .

4. You don’t need an open-top, 4×4 with an entertaining driver relating amusing anecdotes to navigate the scenic Desert View Drive along the South Rim’s panoramic lookouts but it does add to the adventure.

Priced £92 per adult, £83 per child, the fare includes National Park entrance fees and a free IMAX ticket for the film Grand Canyon The Hidden Secrets. Visit .

5. The Trail of Time between Verkamp’s Visitor Centre and Yavapai Point and Geology Museum is stroller and wheelchair friendly. Walk below as well as around the rim as looking up provides a whole new perspective.

Even a short descent to the aptly-named Ooh Aah Point on the South Kaibab Trail will give you a flavour. 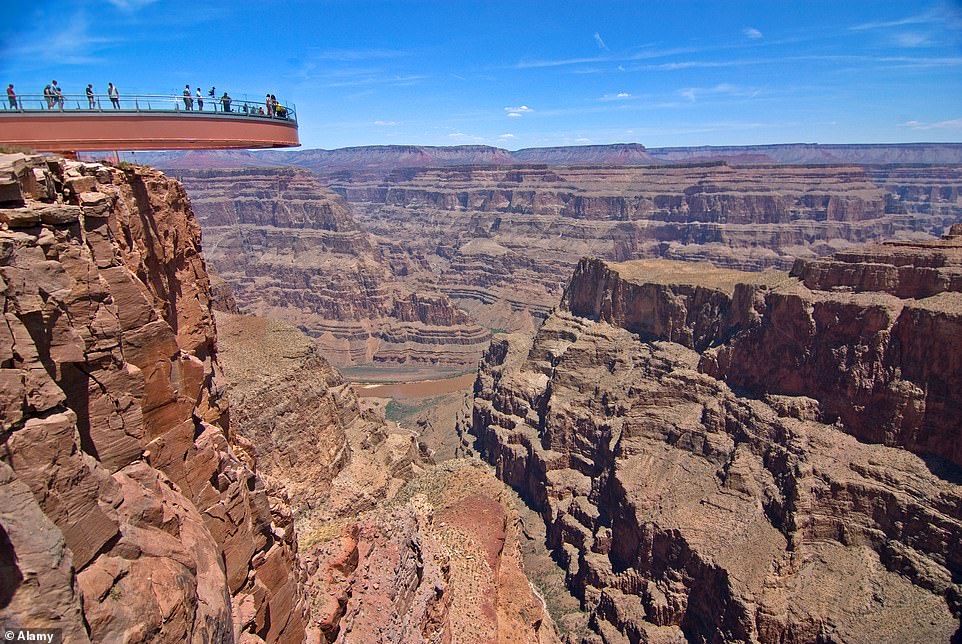 If you’re based in Las Vegas, then Grand Canyon West is closest (130 miles) and attracts the second largest number of visitors — one million per annum.

1. The biggest draw is the Glass Skywalk which juts out 70ft over the edge of the rim like a giant horseshoe. Those brave enough can ‘walk the sky’ on the see-through glass balcony suspended 4,000ft above the Canyon floor.

3. Try cowboy skills such as the mechanical bull at Hualapai Ranch, or soar on the zip line 500ft above a canyon at 40mph. 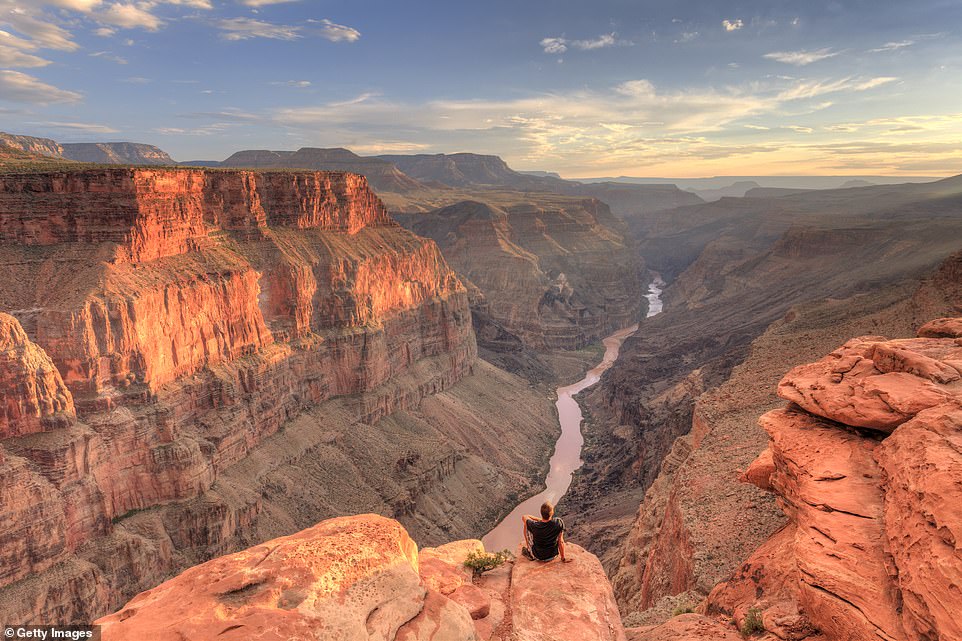 Natural wonder: The North Rim is best suited to those who want to escape the crowds and heat and have the chance of spotting bears or fiery autumn shades

The North Rim is best suited to those who want to escape the crowds and heat and have the chance of spotting bears or fiery autumn shades.

Only seen by 10 per cent of all Grand Canyon visitors, it’s definitely the road less travelled and for good reason as it closes from mid-October to mid-May due to snow-fall.

The nearest regional airports are St George in Utah (currently closed until the end of September) and Page, Arizona, (both about three hours away), while it’s a six-hour drive from Las Vegas and even further from Salt Lake City or Phoenix.

2. Best for nature, the more remote North Rim is easier for spotting wildlife such as bears and mountain lions or rare birds like the California Condor, with its 9ft 6in wingspan.

3. The North Rim’s higher elevation means it is cooler and more peaceful for hiking, cycling and mule treks under the pretty Ponderosa Pines. Far away from light pollution, it’s ideal for star gazing.

Other North Rim activities include snow-shoeing and cross-country skiing in winter, at your own risk.

In summer, reservations for the Grand Canyon Lodge and campsite are essential ().

Do: Wear layers, a hat and sunscreen plus carry water and snacks. Visit in spring or autumn when it’s cooler and not as crowded as summer.

Don’t: Feed the wild squirrels and chipmunks — they will bite and frequently do. Drop litter or throw ‘lucky’ coins.

Audley Travel (, 01993 838 755) offers a 15-day tour of the Western USA that incorporates a three-night visit to the Grand Canyon from £3,155 pp (based on two sharing) and includes flights, car rental, accommodation and activities. American Airlines () has launched a new, year-round daily flight from London in partnership with British Airways. Fly return from £479 pp in Economy; £903 pp in Premium Economy or in Business Class from £4,250 pp return.

Danske Bank whistleblower was former Baltics trading...
So can pillows REALLY anti-age you as you sleep?
How to explore Slovenia's capital on a shoestring budget
Lorry hangs off 65ft-high motorway bridge after driver skids on wet China road
Jo Cox's sister Kim Leadbeater sets out to discover what turned modern life so toxic
Boris Johnson urged to become 'Brexit martyr' after suggesting he could break law to force No Deal
British Red Cross worker who helped at Grenfell was depressed
2,300 passengers are kept on a cruise liner in latest coronavirus scare