A policewoman overseeing a bungled operation which saw an unarmed suspect shot dead was distracted by a string of personal texts with a ‘close’ senior male colleague.

Detective Sergeant Deborah Hurst sent her friend a total of 46 texts during her shift that day.

She was accused of a ‘deplorably casual approach’ by a judge in a damning report on a series of blunders which led to the killing of career criminal Anthony Grainger, 36. 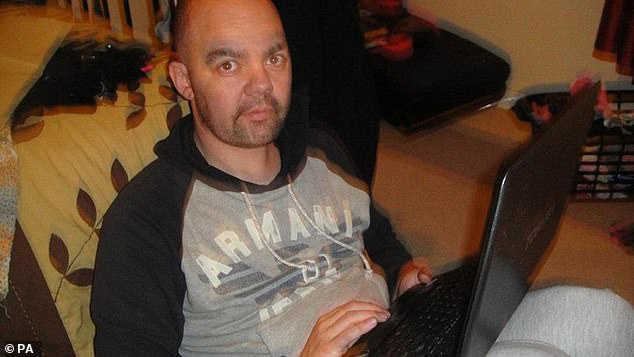 A report released today said the fatal shooting of unarmed father-of-two Anthony Grainger, 36, pictured, by police could have been avoided 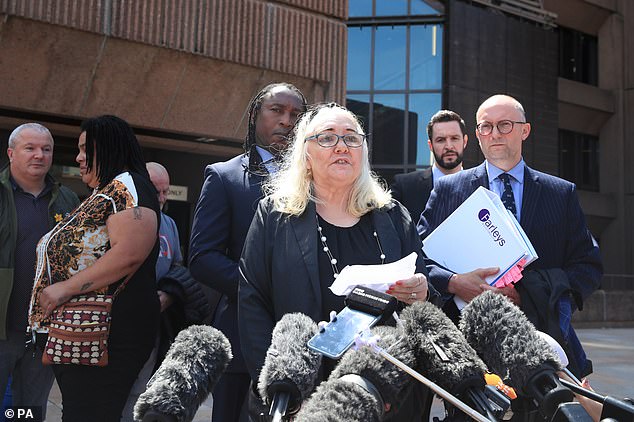 Judge Thomas Teague QC said the police marksman – referred to as Q9 – made a ‘catastrophic but genuine mistake’ whose roots lay mainly in the ‘ineptitude’ of senior officers. DS Hurst exchanged ten messages with Detective Superintendent Anthony Creely in the ten minutes before the fatal shooting.

Over the course of her shift he sent her 48, the report revealed. She was ‘unable’ to tell a public inquiry into Mr Grainger’s death what the messages were about, but he was not involved in the operation.

The wife of Anthony Grainger – who spent £50,000 to become a lawyer in an attempt to clear his name says she plans to use her expertise to take the police officers responsible to court for manslaughter.

Gail Hadfield-Grainger, 36, of Bolton, Greater Manchester, went on an extensive quest for justice following husband Anthony’s death in 2012 which saw her take on two law degrees. 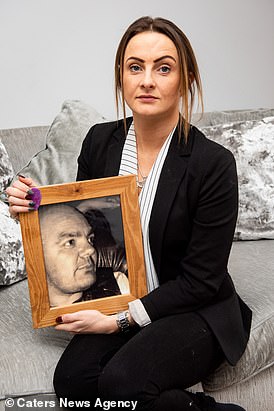 Speaking after the outcome this afternoon, Mrs Hadfield-Grainger said she believes the decision to pursue the degrees, despite having no higher education before the shooting, had helped reveal the true facts of the case.

The full time student and mother-of-two, who was with her husband for four years, said: ‘Today proves the degrees were all worth it.

‘This is one chapter of my life which is now over, but it’s a long chapter.

‘I am now going to be going to be taking Greater Manchester Police to court for corporate manslaughter and perverting the course of justice.’

Mrs Hadfield-Grainger, who met Anthony through mutual friends, was originally studying to be a painter and decorator when he died in 2012.

She then went to college to complete A Levels in psychology, social policy and criminology as a higher education access course to allow her to university before beginning her degrees.

Gail graduated from an undergraduate law degree at Salford University in 2016 and is half way through a masters in criminal justice at the same institution – even recently getting a first in an essay on deaths caused by police officers after she cited HERSELF as a case study.

She has now called on the home secretary to meet her to discuss how the government can prevent further fatalities by GMP – with today’s inquiry report stating Anthony’s untimely death ‘was the consequence of a combination of errors and blunders – not one wrong decision but many’.

Gail believes her law degrees had helped her thoroughly digest the report in just five hours after receiving an advance copy yesterday.

She said: ‘Before I did my degrees if I had been handed something like I wouldn’t have known to speed read, or to read the conclusions first then the executive summary.

‘I am now calling on the home secretary to sit down with my in light of this report to tell me what is going to be done to prevent GMP from killing anybody else.

However, the Mail understands the pair were in a relationship at the time of the shooting in 2012. In his report, Judge Teague said it was disturbing a key officer in the covert surveillance of Operation Shire was conducting a personal conversation at a critical phase.

He added: ‘I reject her claim that these private conversations did not compromise her ability to focus on her work.’ He said she had ‘allowed herself to be distracted by purely personal matters at a critical stage of events when she should have been devoting her full attention to the events unfolding’.

The judge stressed: ‘While there is no evidence to suggest that her lack of concentration contributed to the outcome of those events, it nonetheless reflects a deplorably casual approach to herresponsibilities as deputy senior investigating officer.’ It is thought DS Hurst – now part of a unit tackling modern slavery – and Mr Creely – currently a detective chief superintendent – are no longer together.

The extraordinary exchange was just one of a series of errors in the planning and execution of a swoop on suspected armed robbers.

Judge Teague said a police-issue CS gas canister fired into a car to incapacitate the suspects amounted to an illicit ‘chemical weapon’ and its acquisition could constitute a criminal offence. The report yesterday prompted calls for Greater Manchester Police to be prosecuted for corporate manslaughter. On the evening of March 3, 2012, Mr Grainger parked a stolen Audi, also carrying notorious criminal David Totton and passenger Joseph Travers, in Culcheth, Cheshire.

The trio – wearing gloves and hats which could be rolled down over their faces – were unaware they were under surveillance by DS Hurst and her team. They were suspected of planning a ‘hostage’ robbery. Armed officers swooped and boxed in the Audi with their vehicles and demanded the occupants raise their hands. Both passengers complied.

But Q9 told the inquiry hearing at Liverpool Crown Court he believed Mr Grainger had reached down to grab a firearm.

He fired his submachine gun once through the windscreen, fatally injuring the father-of-two. In the event, no firearms were found in or around the vehicle, and the passengers were later cleared of conspiracy to rob. Judge Teague revealed devastating failings which included:

n Inaccurate intelligence that Mr Grainger might be armed – a file created by officers wrongly linked him to an armed robbery charge which related to his brother;

n CS gas issued to the team to incapacitate suspects had never been authorised for use by police in the UK, representing ‘a cavalier disregard for public safety’;

n An ‘alarming’ number of officers involved in the botched strike had failed training courses and were ‘not operationally competent’;

Assistant Chief Constable Steve Heywood, who was the strategic commander, came in for withering criticism. He told the inquiry his handwritten log of the investigation was made at the time, but was forced to admit he had added to it at a later date.

Judge Teague said the top officer’s account ‘lacked candour’ and concluded he did not accept his claim ‘that he had not intended to deceive anyone’.

Mr Heywood never returned to his £117,000-a-year job, retiring last year shortly before being told he would not face criminal charges. He still faces proceedings for gross misconduct. The judge concluded Q9 had an ‘honestly held belief’ that Mr Grainger was reaching for a firearm, but said it was more likely he was going for the door handle to get out of the car.

Judge Teague said the trio had probably been in Culcheth for reconnaissance for a future robbery or to steal a car. He made a series of recommendations which included fitting unmarked cars with loudspeakers to ensure suspects cannot fail to hear instructions to raise their hands. 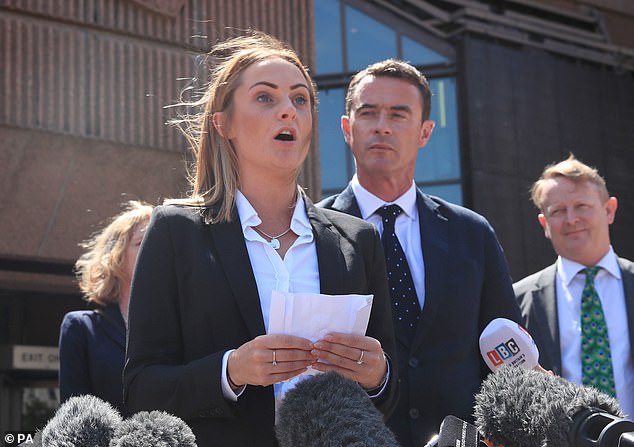 Grainger’s wife Gail Hadfield-Grainger, pictured, said she was still waiting for an apology from the police over the death 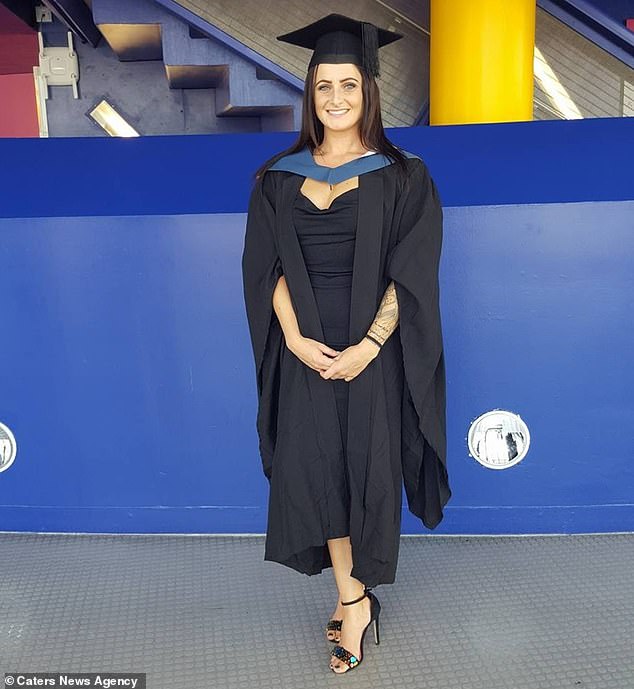 Mrs Hadfield-Grainger, pictured at her graduation from the University of Salford, is currently taking a Masters’ law degree and vowed to pursue manslaughter charges against the police officers ‘responsible for her husband’s death’ 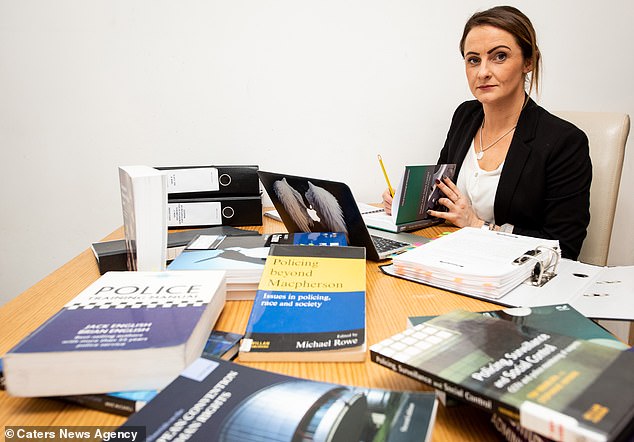 The mother-of-two, pictured, was training to become a painter/decorator before the career change when her husband was shot dead 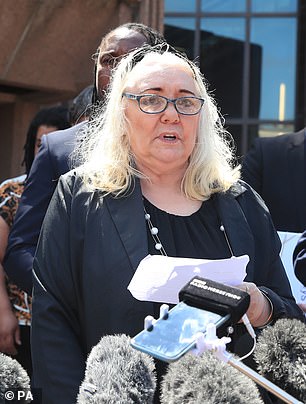 Ms Grainger, pictured today, added she would be asking the CPS to bring criminal charges against the force

Mr Grainger’s mother, Marina Schofield, said afterwards the inquiry had revealed ‘levels of staggering ineptitude way beyond what was expected’.

Leslie Thomas QC, representing the Grainger family, called for senior officers to be prosecuted and said the report amounted to a ruling that the force had ‘unlawfully killed’ Mr Grainger. In a statement Greater Manchester Police offered its ‘condolences’ to Mr Grainger’s family and said it would be considering Judge Teague’s findings.

It declined to comment on the relationship between DS Hurst and Mr Creely. Giving evidence to the inquiry, DS Hurst agreed the atmosphere at the scene was ‘frantic’. Asked about the messages to Mr Creely, she said: ‘They could be one-word texts’. She stressed that she ‘could still listen to the radio’. 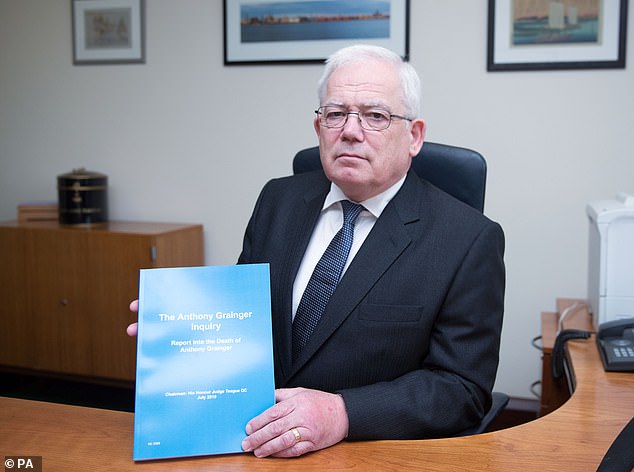 Judge Thomas Teague QC, pictured, chaired a 2017 public inquiry into the killing and said police did not ‘plan, brief or conduct the operation competently’

Anthony Grainger’s day job was driving recovery vehicles for a breaker’s firm – but he had been connected to serious crime for at least 15 years.

In 2011 Mr Grainger, from Bolton, was arrested over the theft of a memory stick containing the names of 1,000 informants from the home of a drug squad officer, but no action was taken against him.

Following his killing, campaigners backed by his partner Gail, suggested his death was ‘somehow linked’ to the disappearance of the memory stick. But Judge Teague yesterday concluded the two events were ‘wholly unrelated’. However, it did sow the seeds for the catastrophic operation which resulted in his death the following year.

His brother Stuart – jailed in 2001 for a gangland murder – was charged with an armed robbery in Prestwich in 1996 but the case against him was ordered to lie on file. When officers were investigating the memory stick theft, a ‘profile’ of Anthony Grainger was produced which wrongly linked the armed robbery to him instead. This profile was adopted when Mr Grainger became a focus of Operation Shire – meaning armed officers were wrongly briefed he had been suspected of involvement in firearms.

Passenger David Totton is a feared ‘hardman’ who in 2010 survived a gangland assassination attempt at a pub in Salford.

The two would-be assassins were disarmed and then shot with their own guns. No one has been charged with the killings, but it meant Mr Totton did have a firearms ‘marker’ on the police computer system and was regarded as dangerous.

In 1997 Mr Grainger had been behind the wheel of a stolen BMW which rammed a pursuing police car. He received an 18-month sentence for affray and theft.

In 2008 he was cleared of plotting to supply heroin and amphetamine following a series of retrials but three years later was jailed for 20 months for conspiracy to handle stolen goods. He had no convictions for violent offences.

Greater than one million individuals in India flood aid camps
TABLE-China property price changes in August
Elderly woman, 75, is stabbed to death with man 'known to victim' arrested
The hidden meaning behind Meghan Markle's $440 understated gold ring
Mother shares her sneaker cleaning recipe she is using to restore her children's shoes
How Pinch of Nom became the must-read for slimming recipes including a full English breakfast
Game Of Thrones finale: Fans panic ending will be a massive letdown
Eight children are among 19 people stabbed in attack at bus stop near Tokyo