ensured that her slender physique was on full display as she enjoyed a night out in Mykonos on Tuesday.

The American model, 23, looked amazing in a fitted red floral dress as she exited the Bonbonniere Club with a male companion.

It comes after sources claimed that Kendall has ‘enjoyed’ being single again following her split from basketball player beau Ben Simmons after a year of dating. 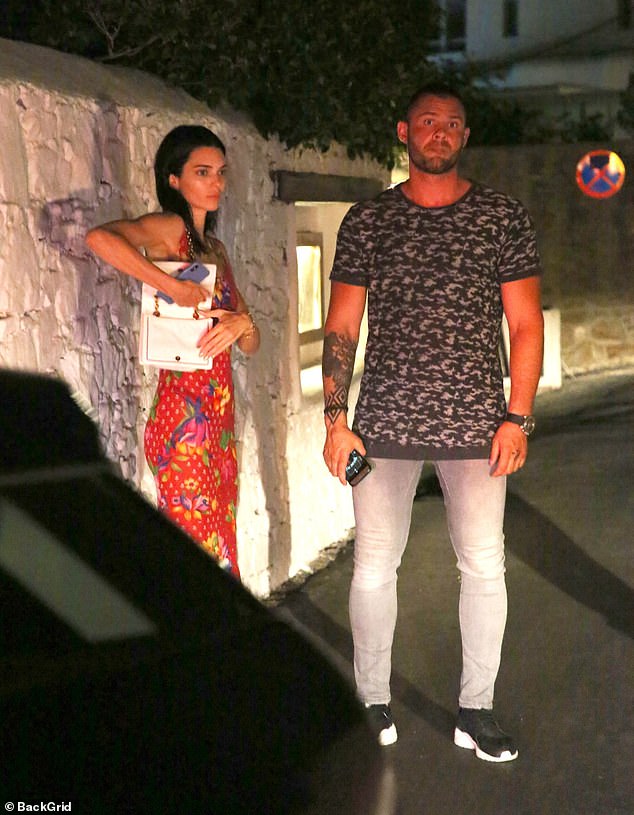 Relaxed: Kendall Jenner, 23, was oozing summer chic as she stepped out with a male companion on a night out with pals in Mykonos on Tuesday

Kendall oozed summer chic as she enjoyed the outing with her pals in the picturesque Greek island.

The Keeping Up With The Kardashians star displayed her trim figure in a fitted floral midi dress, which boasted a mixture of leaf and spotted print.

Kendall finished her evening look with a chic pair of black kitten heels and a white chain-strap bag. 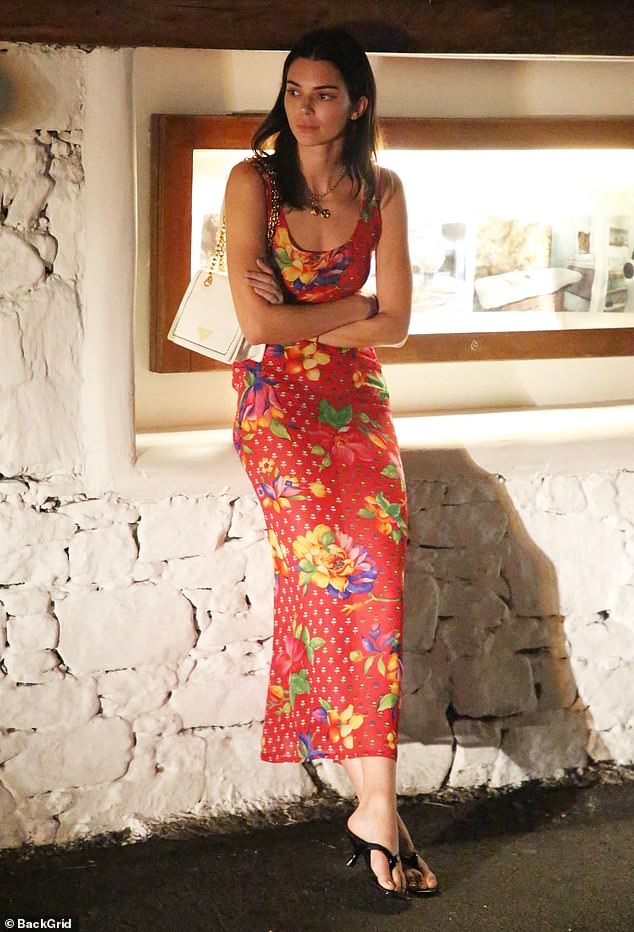 Lovely: The American model slipped her slender figure in a gorgeous red floral dress as she left the Bonbonniere Club on the picturesque Greek Island

Keep up with Kendall…

When it comes to accessories, Kendall always gets it right. During her trip in Mykonos, the supermodel completed her summery ensemble with a major piece of arm candy!

Her white and gold number is by Prada and we love the timeless aesthetic. It features a sliding metal chain shoulder strap to provide just the right fit, magnetic flap closure and an inside zipper. Plus, the versatile design allows it to transition from a crossbody to a shoulder bag!

You can bag it for yourself – just click (right) to purchase it now – or alternatively, peruse the edit below to copy Kendall’s look for less. We’ve rounded up our favourite white and gold styles fromi Faith, Yuzefi, River Island and Michael Kors that are perfect for giving a nod to Kendall’s Prada original.

Kendall was seen out and about with a male pal, after sources denied recent claims that she was dating Los Angeles Lakers basketball player Kyle Kuzma.

While the pair reportedly spent the Fourth Of July weekend together, sources have since claimed that their relationship is strictly platonic.

A source told : ‘The two were hanging out over the holiday as friends.’

‘They’ve run in the same circle for a while and there’s no romantic relationship between them. Kendall is enjoying being single after ending things with Ben.’ 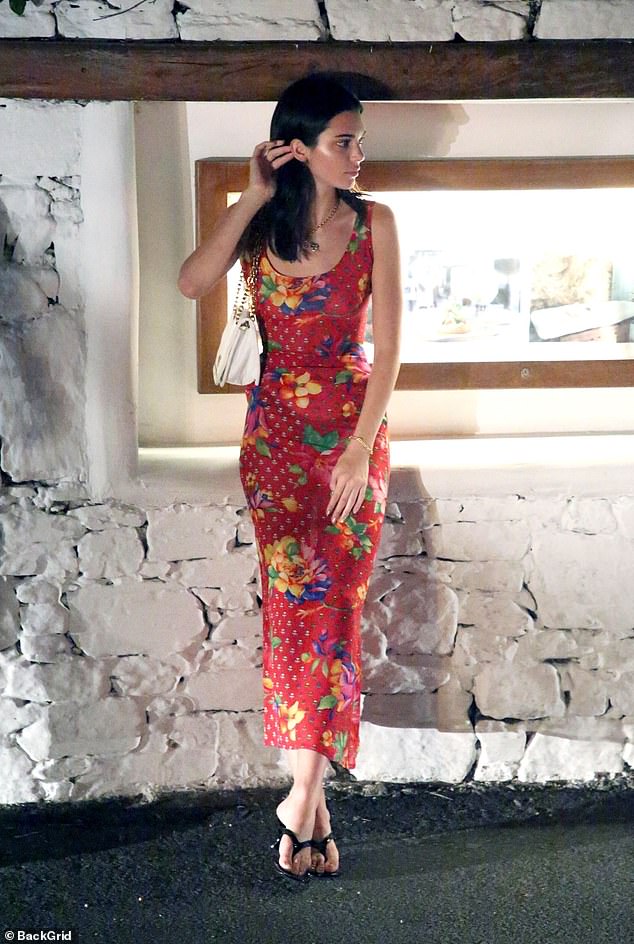 Glamorous: Kendall finished her style look with black heels and a white bag with a gold chain strap, as sources recently claimed that she’s ‘enjoying’ being single

The sighting comes after Kendall pulled off a showstopping version of the viral Bottle Cap challenge.

The Bottle Cap challenge is when someone unscrews a bottle cap using a roundhouse kick – without knocking the bottle down.

The model rocked a yellow bikini as she stood on her jet ski and used her right foot behind her to hit the bottle cap – successfully unscrewing the bottle. 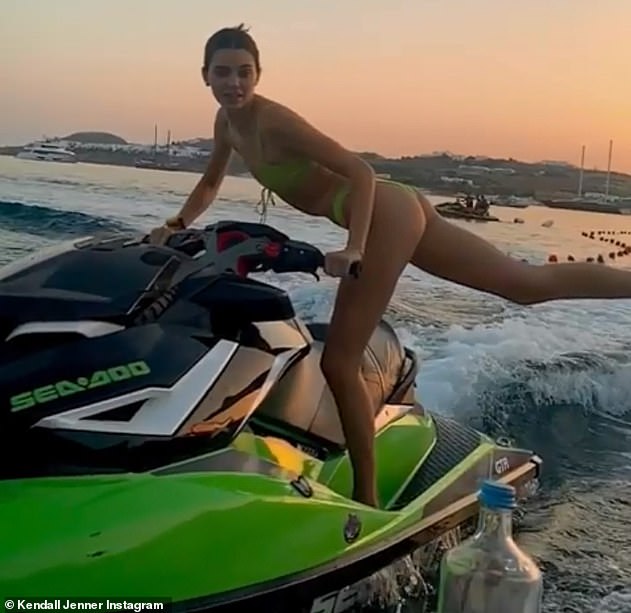 Daring: The sighting comes after Kendall pulled off a showstopping version of the viral Bottle Cap challenge 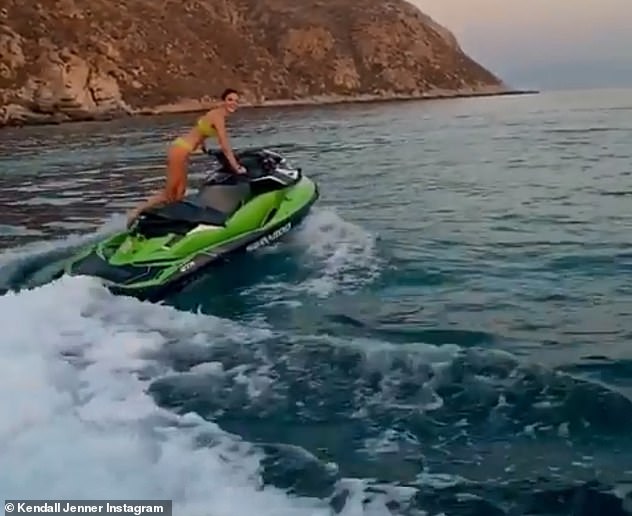 Happy: The reality star donned a skimpy yellow bikini as she unscrewed the cap with ease while riding on a jet ski