US women’s soccer stars Megan Rapinoe and Alex Morgan are being celebrated across the country after their teams’ World Cup win – even in the pages of Sports Illustrated , which showcased sizzling photo shoots featuring the players in honor of the victory.

Both Alex, 30, and Megan, 34, who co-captained this year’s team, posed for the latest issue of the magazine, showing off their abs in a series of stunning beach snaps, which were re-shared on on Monday by the publication’s editor MJ Day, who praised all 22 women on the team for their success – and their continued efforts to fight for gender equality.

In the images, both women show off the results of their exhausting training schedules, flaunting impressive abs and toned physiques while posing in an array of stylish bikinis. 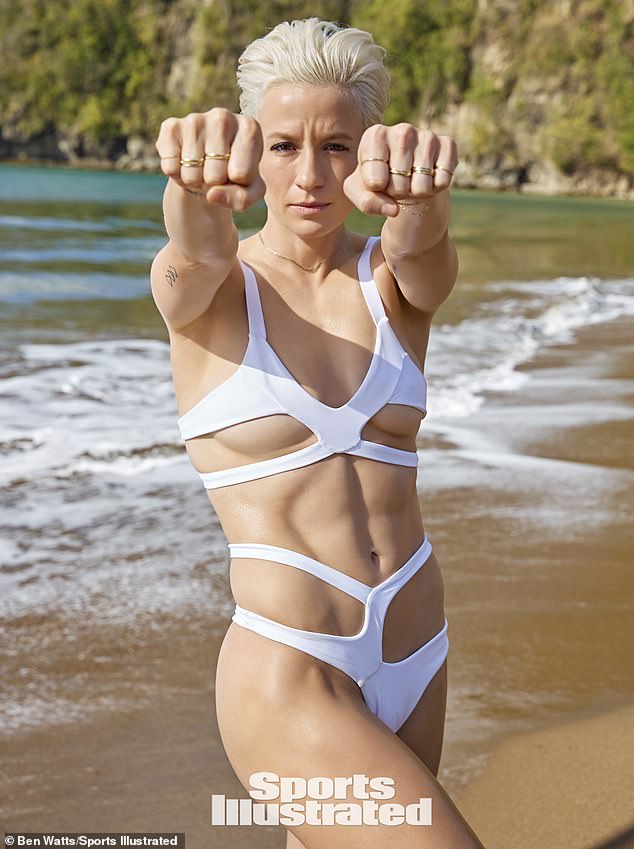 Gorgeous! Sports Illustrated Swimsuit has paid homage to the United States women’s national soccer team after they were crowned the champions of the Women’s World Cup 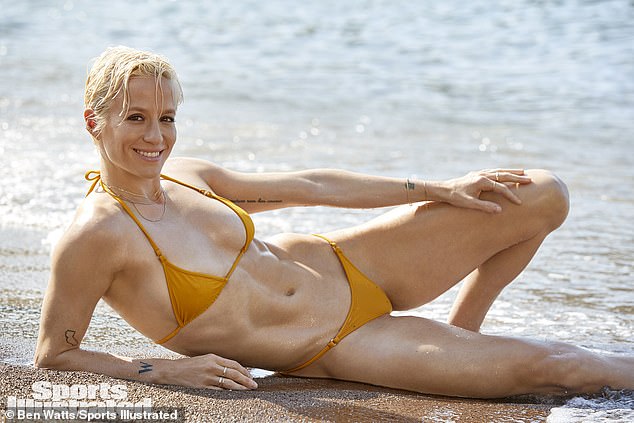 Wow! The publication shared a special showcase for two of the team’s co-captains Megan Rapinoe (pictured) and Alex Morgan

One of the new photos of Megan shows her posing in a white two-piece swimsuit during her photo shoot, which took place in St. Lucia.

The powerful photo shows Megan, who has her hands clenched into fists, holding her arms out toward the camera.

In the image, the soccer star’s toned and lean physique is on full display, as she boasts a stern facial expression.

Meanwhile, another image shows the 34-year-old athlete laying along the shore of the beach wearing an orange bikini.

In the photo, the soccer player is seen laying down with the support of one of her arms, while she smiles brightly at the camera.

The athlete, who is the team’s co-captain, scored the opening goal in the 2-0 win over the Netherlands, while Rose Lavelle scored the USA’s second goal of the Final.

During a post-game interview with , Megan took the opportunity to wish her brother Brian a happy birthday.

Megan, who turned 34 last Friday, has talked openly about her brother’s addiction problems. He currently resides at the San Diego’s Male Community Reentry Program – a rehabilitative program that will allow him to stay out of prison while he finishes a sentence on drug offenses.

Despite subsequently being invited to the White House ‘win or lose’ by the President, it remains unclear whether any of the players will take Trump up on his offer.

Megan, an openly-gay LGBTQ advocate who has been critical of Trump and his social policies, has also refused to sing the national anthem or put her hand over her heart before World Cup games. 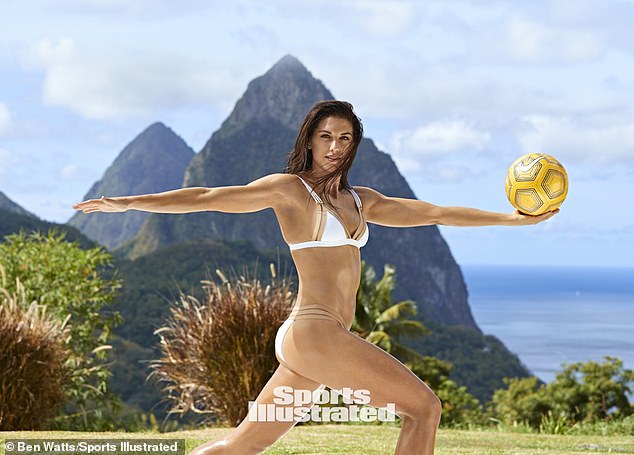 Champions: One image sees the 30-year-old, who landed on one of this summer’s covers, posing in a white bikini while holding a football in her hand 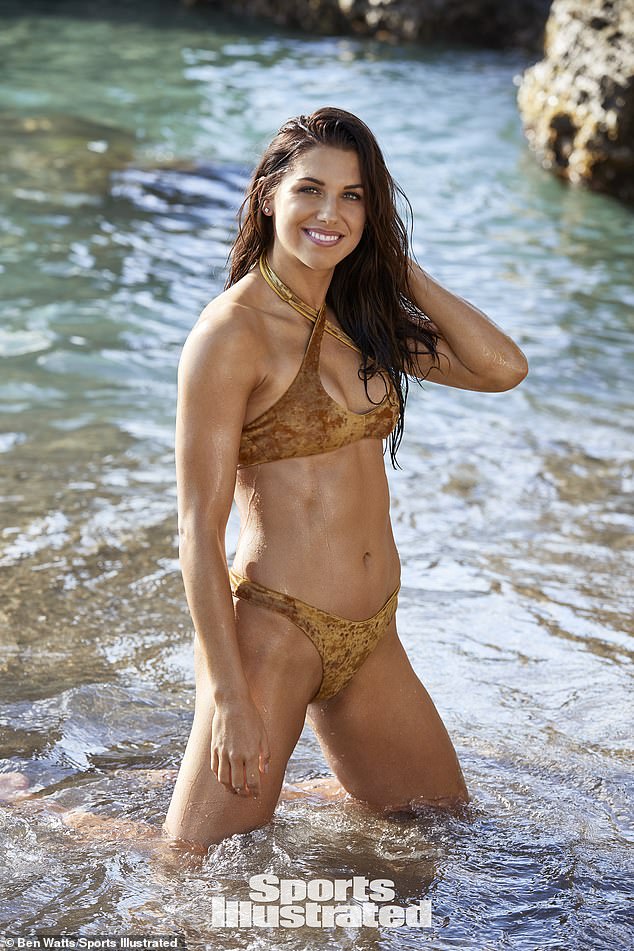 Fierce: Another photo sees the athlete wearing an orange, velvet bikini as she kneels in the water during her Sports Illustrated Swimsuit photo shoot in St. Lucia

She previously knelt during the anthem in 2016, becoming one of the first white athletes to do so in solidarity with equal rights advocate and former NFL quarterback Colin Kaepernick.

The US Soccer Federation responded by creating a rule demanding that players stand for the anthem, and the athlete has complied.

One image sees the 30-year-old, who landed on one of this summer’s Sports Illustrated Swimsuit covers, posing in an orange-colored, velvet halterneck swimsuit.

In the photo, the soccer player is seen kneeling in the water as she poses with one hand behind her head.

The other image of Alex shows her wearing a white bikini and posing in a more natural stance, as she poses with a football in her hand.

The athlete is seen in a lunging position in the tropical location, as she holds one hand out in front of her holding the ball, while she extends her other hand to the opposite side.

The American striker, who is also a co-captain of the team, shared a celebratory post to Twitter after the win on Sunday, simply writing: ‘World Champions’.

After team USA’s win over the Netherlands in Lyon, France on Sunday, Sports Illustrated Swimsuit editor MJ Day paid homage to the ladies.

Alongside a series of images of some of the team’s players, MJ wrote: ‘I couldn’t bring myself to post something prior to the game because as insane as it sounds, I didn’t want to jinx it.

‘Alex, We have been friends for years and Megan, Crystal and Abby I fell in love with you guys on our shoot. I feel so connected to you all as humans, as a woman and as a FAN. 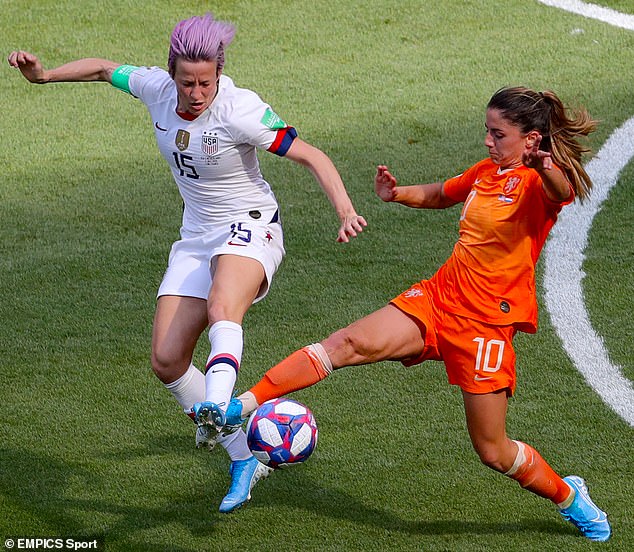 Legends: Pictured during the final, Megan (L) scored the opening goal in the 2-0 win over the Netherlands 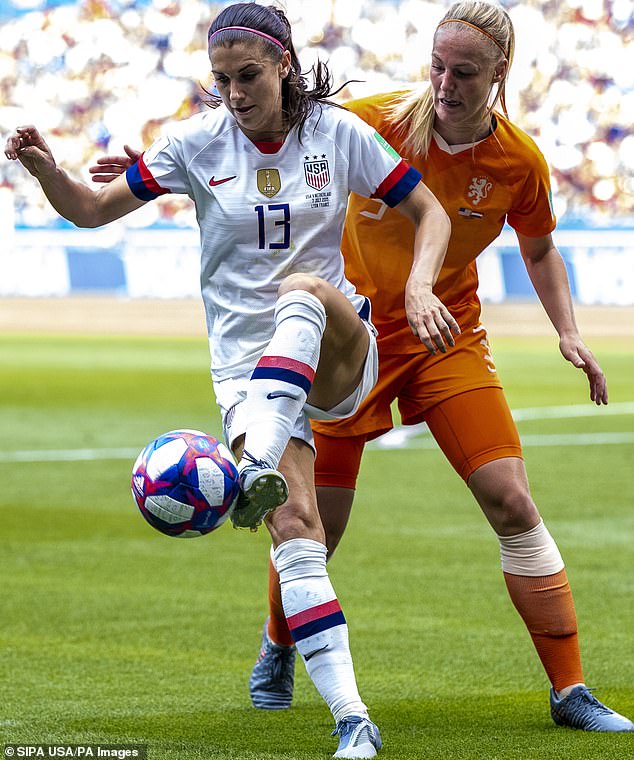 Winners: The American striker (L), who is also a co-captain of the United States women’s national soccer team, shared several celebratory posts to social media after the win 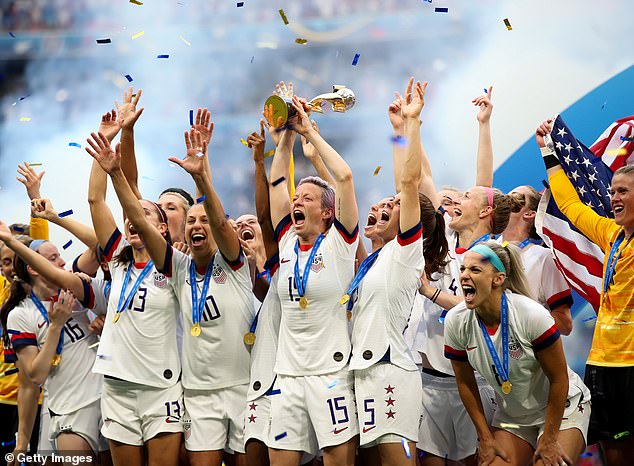 ‘Like so many, I wanted this so badly for you all, for your team and for the world to see just what 22 women can do. Win, yes but use your power for good in ways that will affect all of us. We all fight this battle as women whether we realize it or not.

‘And you all are on the front lines taking the hits for us. I’m so SO proud to know you all. I’m so proud to be connected to this group of 22 women who fought like hell and don’t give any Fs.

‘I’m so proud to know the women who took on the WORLD and WON. CONGRATULATIONS!!! Sending you all so much love,’ she added.

MJ Day previously shared a tribute to team USA ahead of the Women’s World Cup final on Sunday, July 7.

The editor shared a series of images of some of the team’s players from their shoots for the magazine on Tuesday, June 11, including Megan Rapinoe, Alex Morgan, Abby Dahlkemper and Crystal Dunn.

MJ continued: ‘Fighting to win not only a soccer game but a lot of other pretty fking important stuff as well. Keep kicking ass ladies. #equality #respect #girlpower.’

The editor’s praise for the women comes not only after they won the Women’s World Cup, but also after members of the team filed a federal gender discrimination lawsuit back in March.

Speaking about the issue, Megan Rapinoe previously told Sports Illustrated Swimsuit: ‘Obviously, we would love to not be in this fight.

‘We would love to not have to file this lawsuit and not have to engage in this, but that’s just not what’s happening,’ she added.

Consultants share their most helpful hacks to assist dad and mom throughout back-to-school season
'BIG leap forward': Trump hypes Xi trade deal with name of farm program that killed tens of millions
1,000 flights canceled across the U.S. from winter storms
Ousted ambassador: Pompeo planned to call SEAN HANNITY to find out if rumors about her were true
Fiancee of Aaron Hernandez thanks her social media followers for 'support' after Netflix documentary
Driver Ryan Newman is rushed to hospital after horrifying Daytona 500 last-lap crash
Melania joins her husband at Whitehouse meeting with key black figures
Top Chinese doctor says coronavirus patients with hypertension at risk of 'dangerous complications'