The U.S. women’s soccer team left their French hotel as world champions this morning after storming to their fourth title on Sunday.

Captain Megan Rapinoe smiled as she left the hotel in Lyon less than 24 hours after she scored the opening goal in the final and was named the player of the tournament.

The T-shirts were decorated with four stars, marking the American team’s fourth World Cup triumph after 1991, 1999 and 2015. 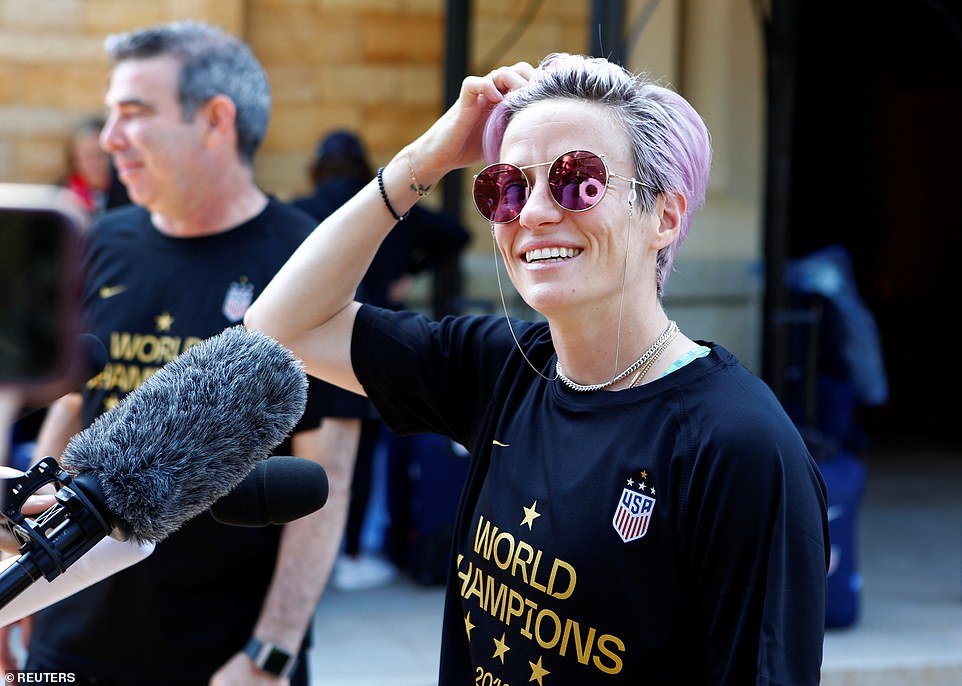 Leading the way: U.S. women’s soccer captain Megan Rapinoe leaves the team hotel in Lyon this morning as the triumphant players return home after winning the World Cup for the fourth time 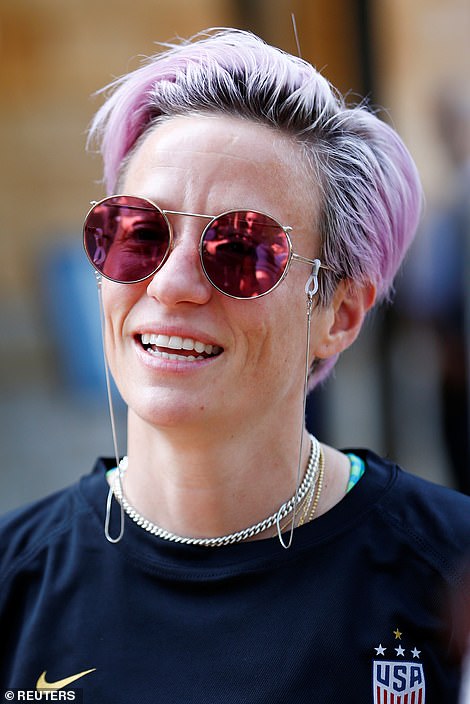 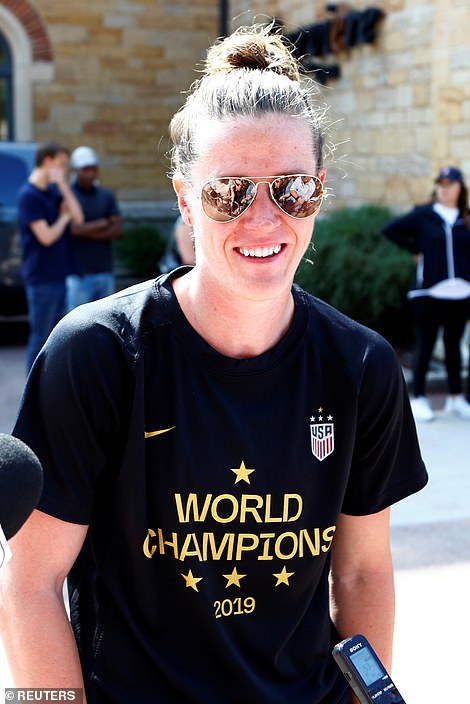 The United States women’s national team will be honored Wednesday with a parade in .

‘To our 2019 World Cup Champion @USWNT: you have inspired the entire country – and New York City knows how to celebrate champions.

‘We’ll see you Wednesday at 9:30 AM for the Ticker Tape Parade down the Canyon of Heroes. #OneNationOneTeam.’

The team also was honored with a parade in lower Manhattan in 2015 – the most recent sports team to be celebrated in New York.

Rapinoe, who was also seen boarding the team bus outside the hotel, has made both friends and enemies after vowing not to visit the White House if the team was invited by President Trump.

She also declined to sing the national anthem when the team lined up for the final against the Netherlands yesterday.

However, her achievements on the pitch were beyond dispute. Aged 34, quite possibly playing in her last World Cup, she not only captained her side to victory but won both the Golden Ball award for best player and the Golden Boot for top scorer.

She also broke the deadlock against the Dutch in yesterday’s final, scoring calmly from the penalty spot after a VAR decision had given the U.S. team a spot-kick.

Trump had earlier reacted angrily to Rapinoe’s criticism, saying she ‘should never disrespect our country’ and demanding that ‘she should win first before she talks’.

Yesterday Trump took a more measured tone, congratulating the team for winning the World Cup and saying: ‘America is proud of you all’. 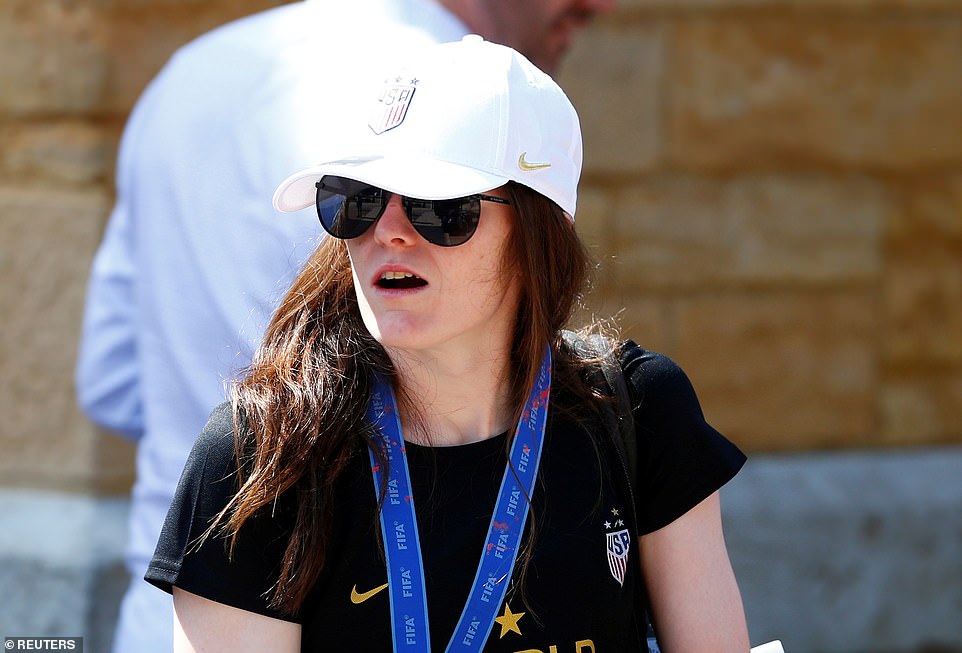 Goalscorer: Rose Lavelle, the 24-year-old who scored the U.S. women’s second goal in the final and was regarded as one of the rising stars of the tournament, leaves the hotel with her team-mates today 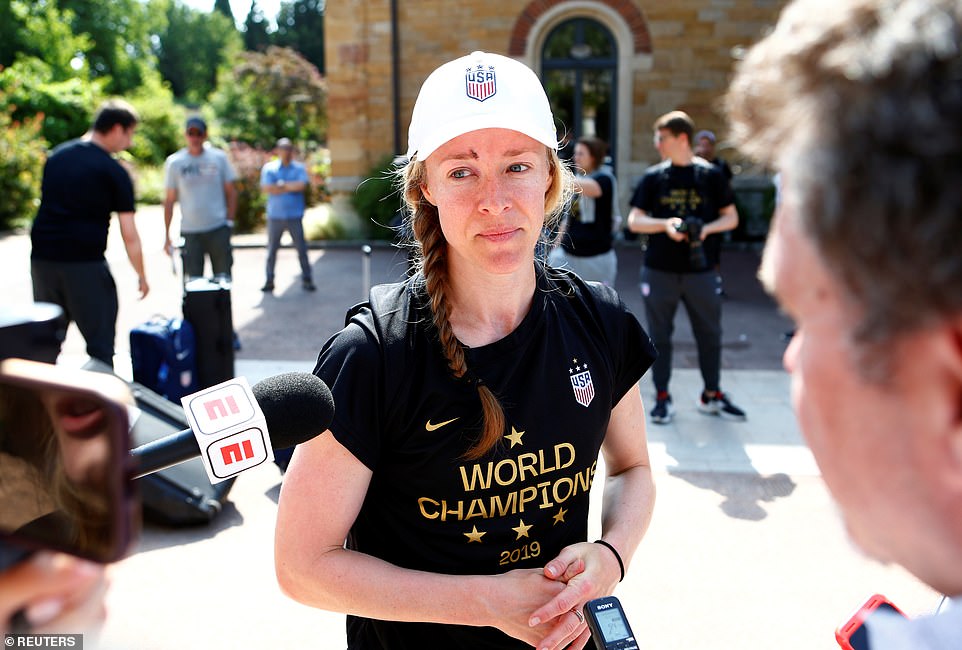 Center of attention: Becky Sauerbrunn of the American team speaks to reporters in France wearing one of the matching ‘World Champions’ T-shirts with four stars

Also pictured outside the hotel was 24-year-old Rose Lavelle, who scored America’s second goal in yesterday’s final and was one of the up-and-coming stars of the tournament.

Whether any of the team will visit the White House remains to be seen, but New York City mayor Bill de Blasio has invited them to a ticker-tape parade in Manhattan.

The Americans never trailed at the tournament and set records with 26 goals and a 12-game World Cup winning streak dating to 2015.

Jill Ellis became the first coach to lead a team to two Women’s World Cup titles, and the U.S. also joined Germany in 2003 and 2007 as the only repeat champions. 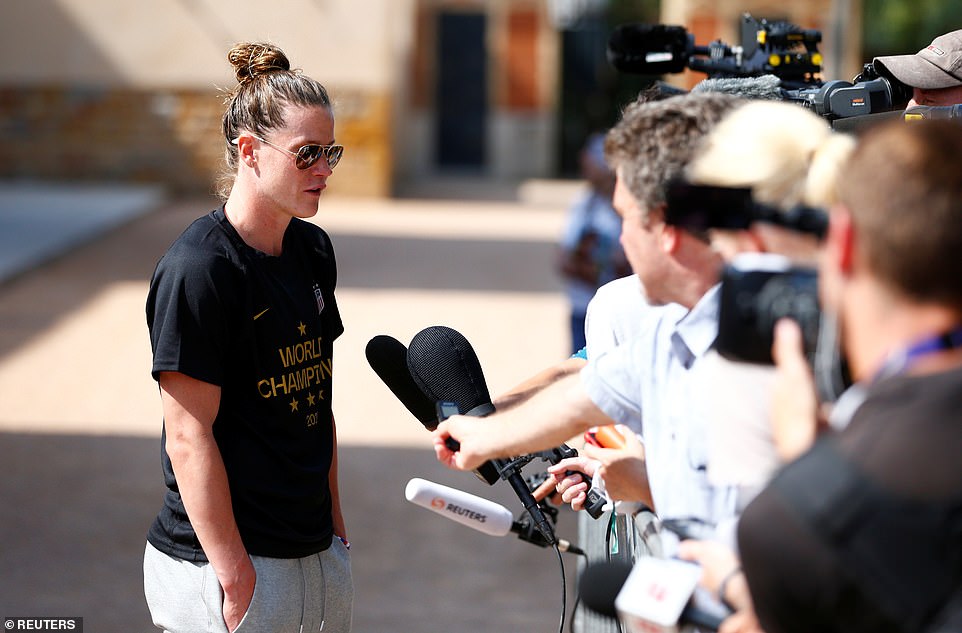 Alyssa Naeher of the U.S. talks to reporters before leaving the hotel to return to the United States after winning the World Cup yesterday 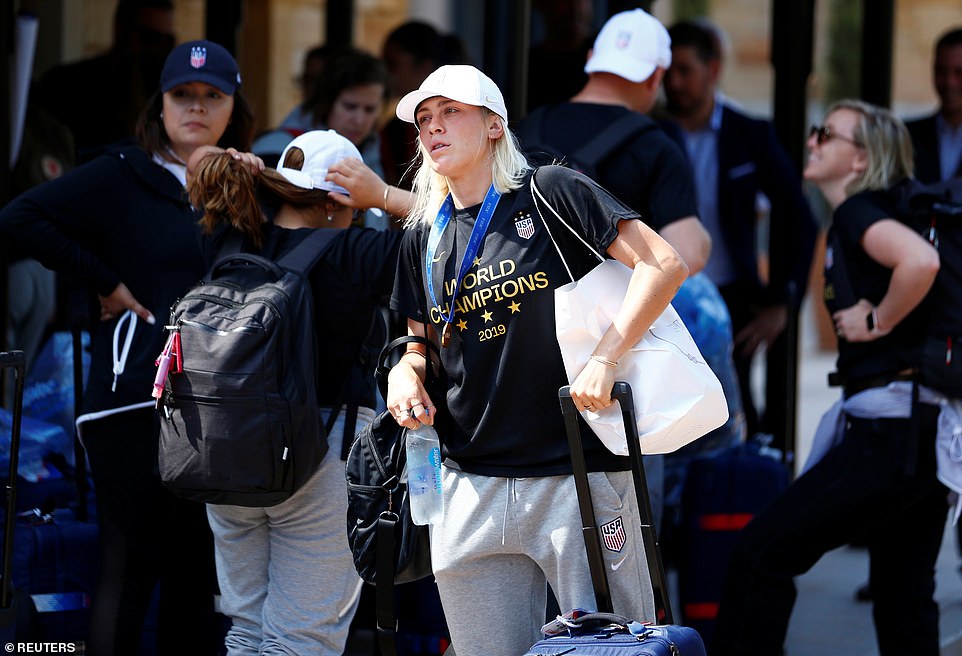 Abby Dahlkemper of the U.S. before leaving the hotel to return to the United States after winning the World Cup yesterday

The Americans opened the tournament with a record 13-0 rout of lowly Thailand, triggering debate over whether the celebrations after each goal were excessive.

U.S. forward Alex Morgan responded in the next match by following a goal with a polite golf clap. Then she stirred it up again when she scored against England, celebrating with a tea sip.

A pair of US staffers visited the Fourvière Hotel, which is close to the old town, while England was out at a practice.

The England-born US coach Jill Ellis insisted it was a sign of good preparation rather than arrogance, because the Americans were considering using that hotel if they advanced to the final.

But Neville claimed it was bad etiquette to scout the hotel before winning the semi-final.