A massive shark, whose ancestors swam the seas before the age of dinosaurs, was caught on camera devouring prey 1,700ft (528m) beneath the ocean.

The sixgill shark was filmed from inside a submarine by a team of researchers on Saturday, June 30.

As the crew look on in astonishment, the majestic beast chomps down on a fish amid swirling clouds of sand, as one of the occupants exclaims, ‘My goodness!’.

The shark, whose forebears were around 250million years ago, then bares her surprisingly small teeth before exploring the exterior of the vessel – while the crew remain quite calm. 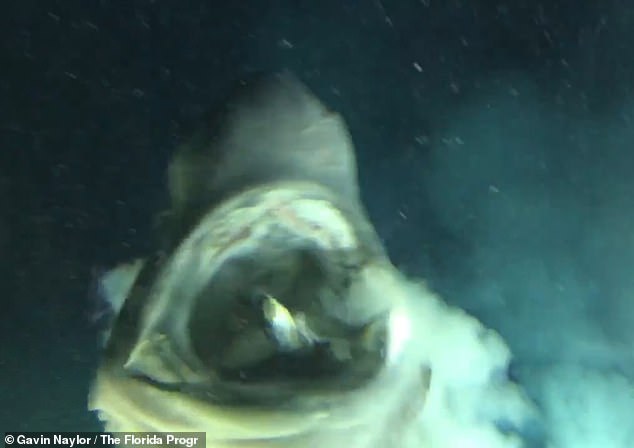 This sixgill shark, whose ancestors swam the oceans before the dawn of dinosaurs, was caught on camera 1,700ft (528m) beneath the ocean – and is seen here about to dine on a fish 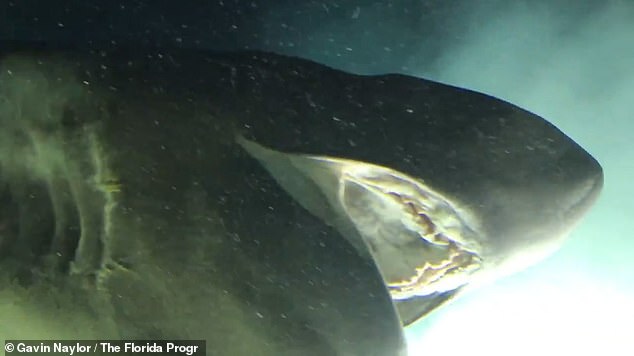 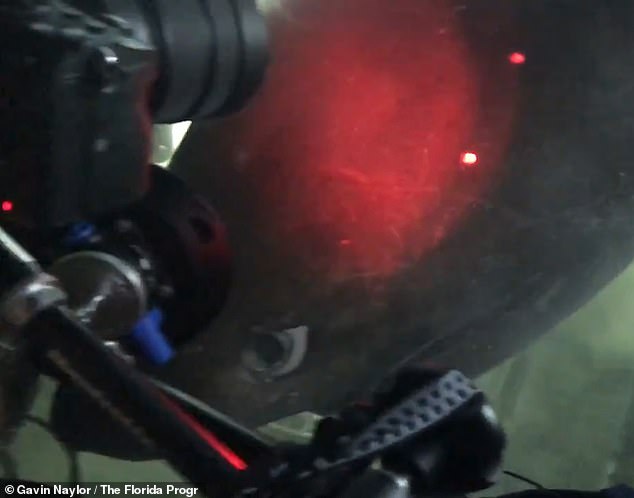 The sixgill is from a group of sharks that have six gills as opposed to the typical five seen in sharks. Above, she gets up close and personal to the researchers’ equipment, and gives a rare glimpse of her blue eyes

A member of the team, from the OceanX project, says: ‘Look at the width of that thing’ – before adding, ‘This is a monster. She is huge.’

At one point, the sixgill pushes her nose across their craft and one of her big blue eyes is briefly visible, before she rolls them back.

The curious creature also has a look at the onboard spearguns, which are used to tag the sharks. 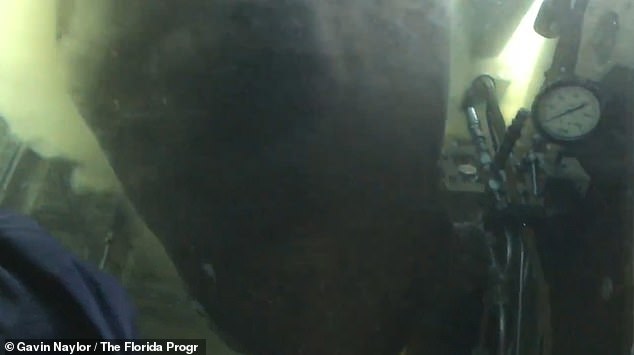 There are three species of sixgill sharks, which belong to the genus Hexanchus and are characterised by saw-like lower teeth

Gavin Naylor – director of The Florida Program of Shark Research, Florida Museum at the University of Florida – uploaded the incredible footage to Twitter on Tuesday.

He wrote: ‘More footage of six-gill at 528 meters from inside the sub last Saturday.

‘This sequence was taken by Lee Frey, our multi-talented sub pilot/engineer/inventor who designed the solenoid triggered spear guns for sub-based tagging. Thanks again to the entire OceanX team. Amazing.’

Sixgill sharks are a group of sharks that have six gills as opposed to the typical five seen in sharks.

There are three species of sixgill sharks, which belong to the genus Hexanchus and are characterised by saw-like lower teeth.

They are distributed worldwide in tropical and temperate waters. 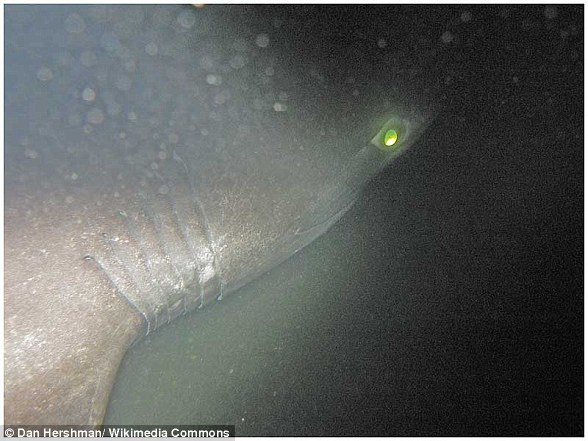 The bluntnose sixgill shark is one of three shark species with six gills. Its eyes are bright green and it feeds nocturnally, ambushing its prey. Because it lives in deep waters, not much is known about it

According to a  led by Toby Daly-Engel, a researcher at the Florida Institute of Technology, many verified records for these species are lacking, and misidentification is common.

The three species can be described as follows:

Bluntnose sixgill shark (Hexanchus griseus): This large, deepwater shark has comb-like, yellow lower teeth, a long tail, and is the largest of the sixgill species, with an average length of 15 to 16 feet (4.6 to 4.9 metres).

It has a blunt, rounded snout, and a single dorsal fin. Its skin colour is dark, ranging from greyish brown to black on the back, and fading lighter towards the belly.

Its eyes are bright green and it feeds nocturnally, ambushing its prey. Because it lives in deep waters, not much is known about it.

Bigeye sixgill shark (Hexanchus nakamurai): A little-known, moderately large shark up to 5.9 feet (1.8 metres) long. It is slender and has a small dorsal fin far along its back, and large reflective green eyes. It is usually dark to light grey on top, fading to white underneath.

It is currently thought to be restricted to the Atlantic and looks very similar to the bigeye sixgill shark.

Portland State College honor pupil turns into the sufferer of racist assault
Roger Stone targets 'leftist retards' who criticize him in rant against media
New Jersey teenager accepted into 17 colleges despite being in and out of homelessness
Ricki Lake reveals she 'couldn't get out of bed' following the 2017 suicide of her ex-husband
Billionaire behind Tupac and Michael Jackson holograms storms out of a sexual harassment hearing
Children born to mothers in polluted areas 'have LOWER IQs'
Trump administration will ban immigrants who have been on food stamps from getting green cards
Coronavirus whistle-blower Li Wenliang, 34, dies after catching it from a patient