She showed off her impressive workout routine this week.

And days later Melanie Griffith proved she was bikini ready, thanks to all her hard work, as she enjoyed time on a yacht in .

The 61-year-old actress was photographed hanging out with pals Loree Rodkin and Polina Kitsenko off the coast of Ibiza. 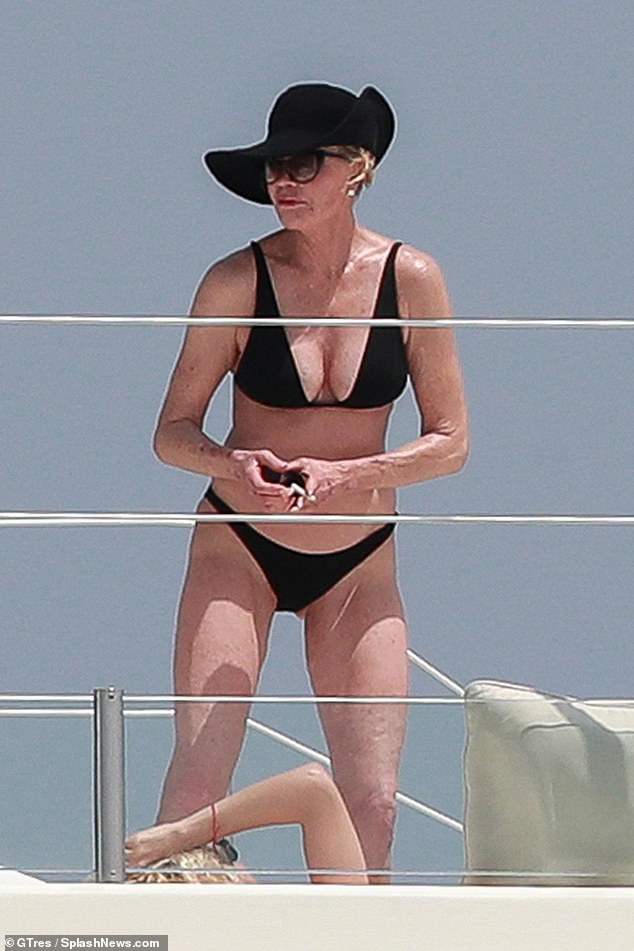 Bikini babe: Melanie Griffith was  photographed hanging out with pals Loree Rodkin and Polina Kitsenko off the coast of Ibiza on Thursday

Melanie looked fantastic in a black two-piece with matching sun hat as she armed herself with a bottle of sunscreen.

She captioned the video ‘Ok. I have been working out with Gunnar, ❤️, for 7 years. I ADORE THIS MAN!’

Crediting her trainer Gunnar Peterson she continued: ‘He helps me keep my 50+11 year old body tight and strong. He is also kind of my therapist.’ 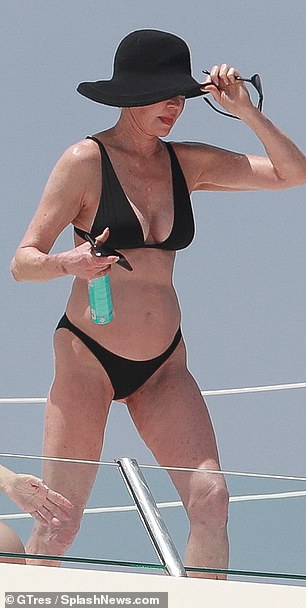 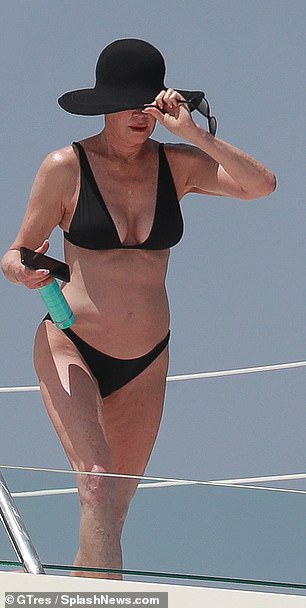 Protected: The 61-year-old looked fantastic in a black two-piece with matching sun hat as she armed herself with a bottle of sunscreen 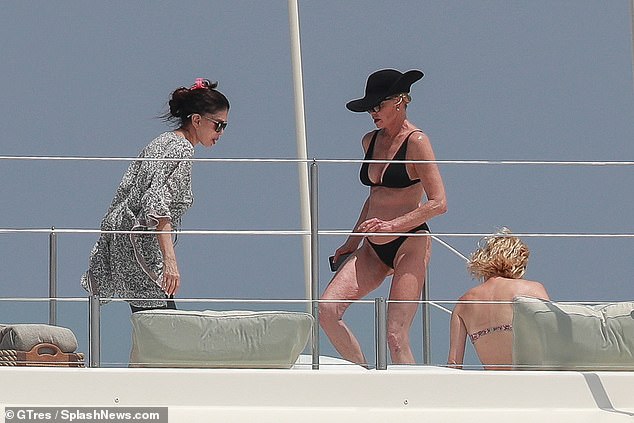 Life is good: The actress enjoyed the views off the coast of Spain on a private yacht 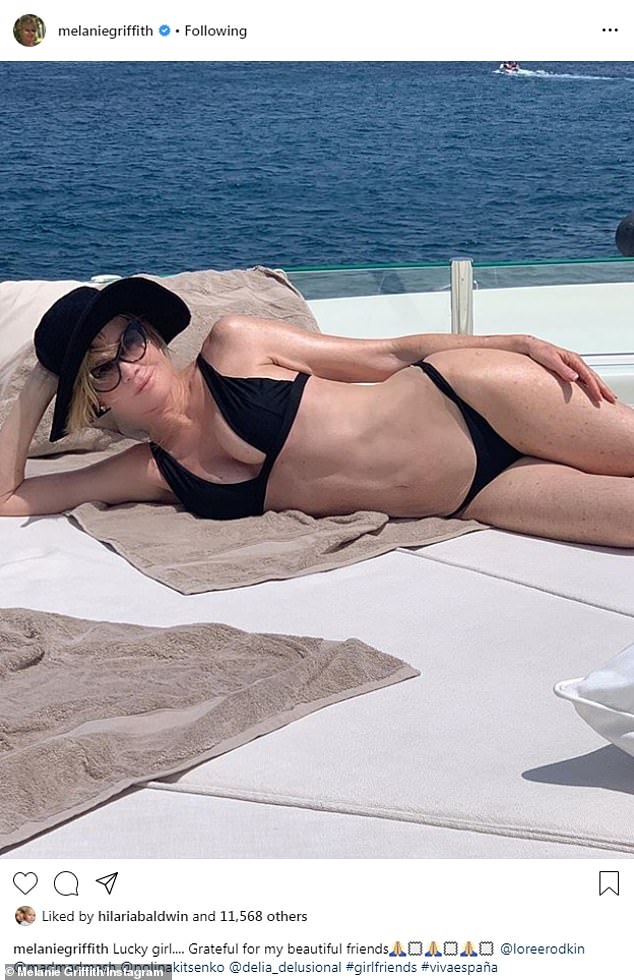 ‘Grateful for my beautiful friends’: The actress shared this snap during the day out

Her trainer along with fans and famous friends praised the Working Girl star for her dedication and amazing figure.

Peterson said ‘Absolutely made my day! Wait, what? You’re not 39?’

Meanwhile, the star said that after four divorces she has no plans to marry again in an interview with .

Of the institution of marriage, Melanie said: ‘I really don’t think it’s relevant for anyone anymore. But especially if you’re 60 and you have four kids and you’re living the life you’ve always wanted.’

Excursion: During the day Melanie donned a striped dress as she headed to a restaurant in Formentera 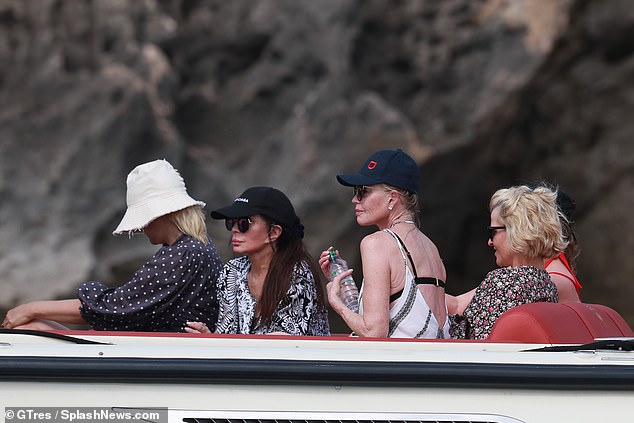 All aboard: The ladies hopped in a small boat to get to the shore 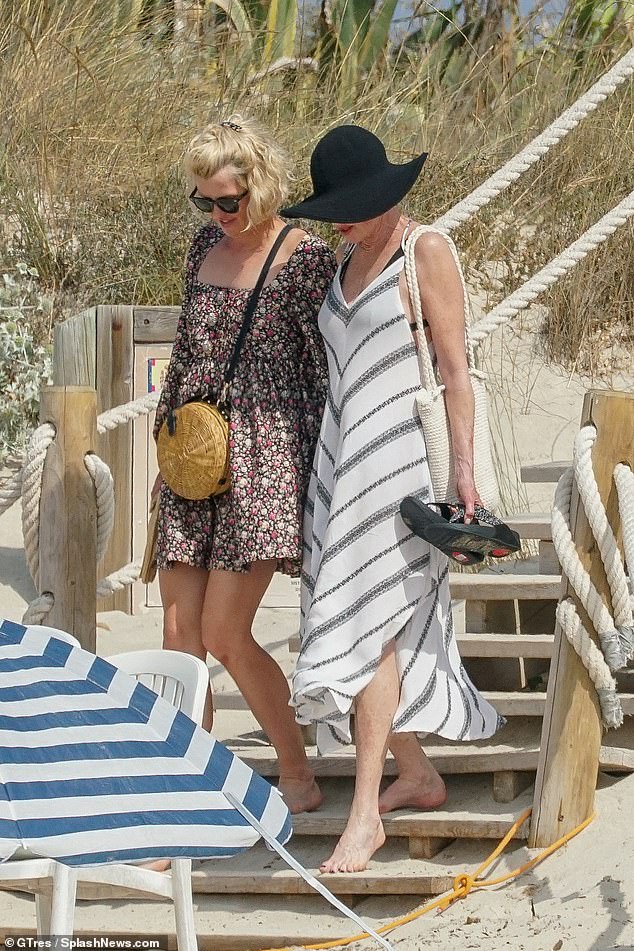 Girls trip: Melanie was seen chatting with pal Polina as they made their way down to a beachside eatery

She mused: ‘Then why get married? It’s, like, I would love to fall in love and have a romance, a relationship, but I haven’t. I keep looking.’

Sharing: ‘I’ve had a couple of lovers but not a relationship,’ she ruled out dating apps: ‘Tinder or something would just be so tacky, I think.

‘I think I can find someone on my own. But if you know of anybody, please tell me.’

Melanie’s first and third marriages were to the same man – Miami Vice heartthrob Don Johnson, by whom she had Fifty Shades Of Grey star Dakota Johnson.

She is also mom to Stella, 22, with ex Antonio Banderas and Alexander, 33, with ex Steven Bauer. 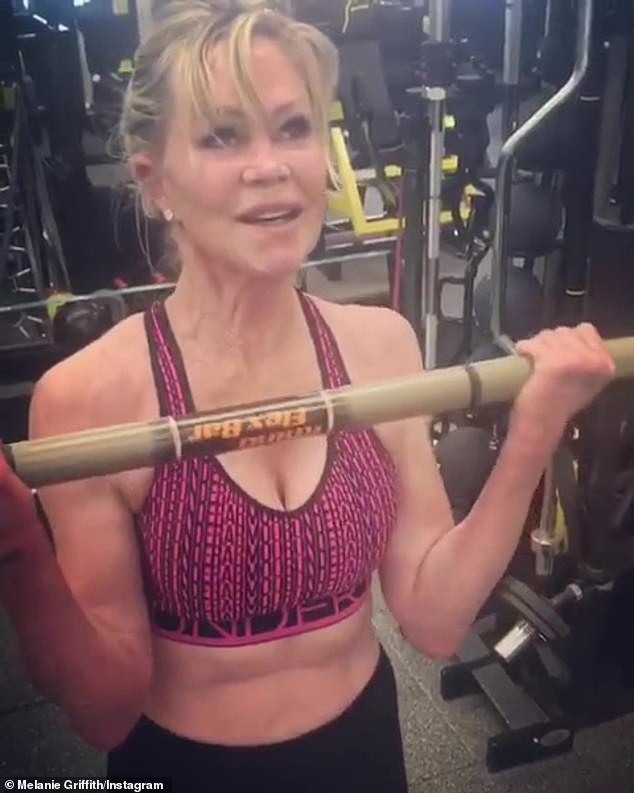 Keeping in shape: On Monday the Roar star shared a video of a grueling workout to her Instagram account