A women-led grassroot organization has gotten permission to hoist their ‘Baby Trump’ hot-air balloon at 4th of July celebrations in DC – but they are upset that it comes with stipulations.

Codepink, a non-governmental organization started in 2002, announced that it will be having a press conference on Wednesday to address the permit.

In a Tuesday , the organization announced that it will be detailing plans to hoist Baby Trump with helium and hold a ‘Trump is a Big Baby’ Festival.

The organization also mentioned that it ‘denounces the military aircraft and tanks that is ordering to militarize July 4, while the National Park Service is denying CODEPINK’s request to fly the Baby Trump balloon two feet off the ground.’ 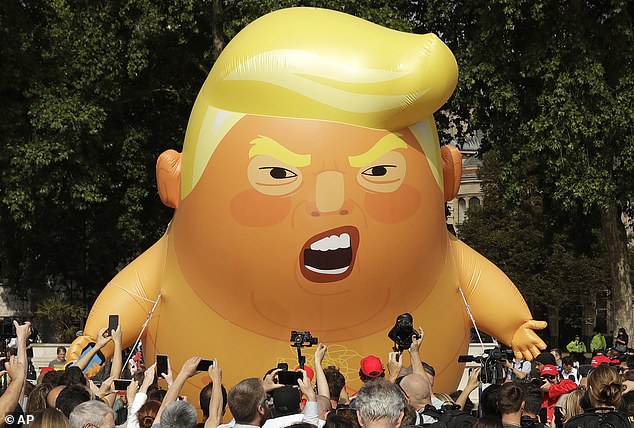 Codepink, a non-governmental organization started in 2002, announced that it will be having a press conference on Wednesday to address the permit for the Baby Trump balloon (pictured in 2018 in London) 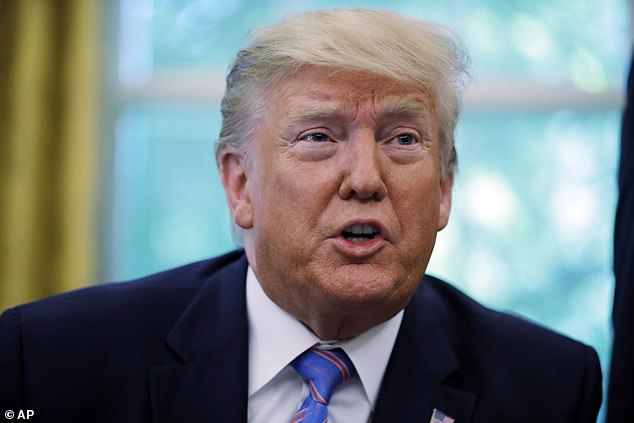 Trump will deliver remarks at the Lincoln Memorial during the ‘Salute to America’ event, which will start at 6.30pm ET on July 4

We will be holding a press conference to protest the militarization of July 4 and talk about our plans to fly Baby Trump with helium and hold a ‘Trump is a Big Baby’ Festival.

Codepink shared that they had initially submitted their permit to the National Park Service on June 6.

On July 1, the permit was granted for the National Mall at the Washington Monument near 17th and Constitution.

The organization shared that it had requested a space at the base of the Washington Monument ‘that would not have obstructed anyone’s view but would have allowed the president to see the baby.’

Instead, Codepink claimed that it was given ‘location options’ – ultimately settling on their location in the Northwest Quadrant. 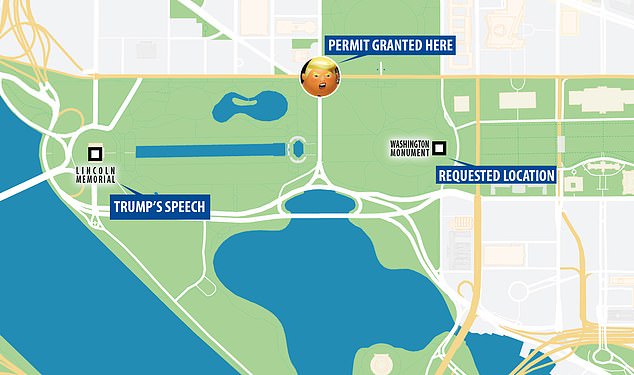 In a Tuesday release, Codepink claimed that they were forced to move locations after initially requesting to be at the base of the Washington Monument so that Trump could see the balloon

Codepink also took issue with the hoops they were having to jump through in order to let the balloon rise off the ground. The org said that they only planned to put helium in the balloon to let it stand 20 ft high – with height restrictions for the National Mall coming in at 45ft.

They were told that in order to do so, Codepink would need to get a waiver from the Federal Aviation Administration. Upon contacting the FAA, they were redirected to the Flight Standard District Office. 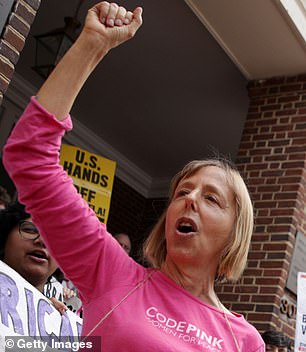 ‘It is ironic that it is right here, in the “land of the free,” the balloon is being grounded,’ said Codepink’s cofounder Medea Benjamin

‘We are now trying to get the waiver from the FSDO, but feel this bureaucratic process is designed to force us to just keep the baby on the ground, instead of floating it in the air. It’s ridiculous that we have to contact the FAA to hoist a balloon two feet off the ground,’ said CODEPINK logistics manager Tighe Barry.

‘There is nothing dangerous about helium–there are lots of helium floats in the July 4 parade. And you certainly can’t say that a 20-foot-tall balloon is going to interfere with Trump’s Air Force One and the Navy’s Blue Angels!’

The sentiment was shared by Codepink’s cofounder Medea Benjamin.

‘It is ironic that it is right here, in the “land of the free,” the balloon is being grounded,’ she said.

The Trump Baby balloon shows Trump in diapers while holding a cellphone. It has flown in London on both of President Trump’s visits.

Trump will deliver remarks at the Lincoln Memorial during the ‘Salute to America’ event, which will start at 6.30pm ET.

New Zealand set to ban foreigners shopping for houses after super-rich pattern of making doomsday bu...
Police respond to reports of an active shooter at North Carolina High School
Venezuelan officials find large cache of weapons hidden at airport that were delivered from Miami
EU 'to sign off Brexit flextension': Brussels is hopeful a Brexit date of January 31
Florida man, 21, ran over a 75-year-old Vietnam veteran on purpose 'so he could see what it's like'
Scientists discover cannabis compound that may be 30 TIMES more potent than THC
Big US cities prepare to become next NYC: Chicago, Detroit and LA brace for coronavirus onslaught
You had one job! South Africa's President Ramaphosa hilariously struggles to put coronavirus mask on