A Tennessee cop has become an unlikely viral sensation after starring in online road safety video – because viewers couldn’t stop swooning over his ‘handsome’ looks, with some actually threatening to commit a crime in order to get his attention.

The now viral clip was shared to the Knoxville Police  account on Friday, June 28. Since it was shared, the two-minute video has garnered over 2,700 likes and a further 500 shares, as users fawn over a young male cop called Officer White.

Similarly, it has racked up over 100 comments as dozens of Twitter users swoon over the police man’s appearance and request the officer to ‘personally explain’ the new law to them. 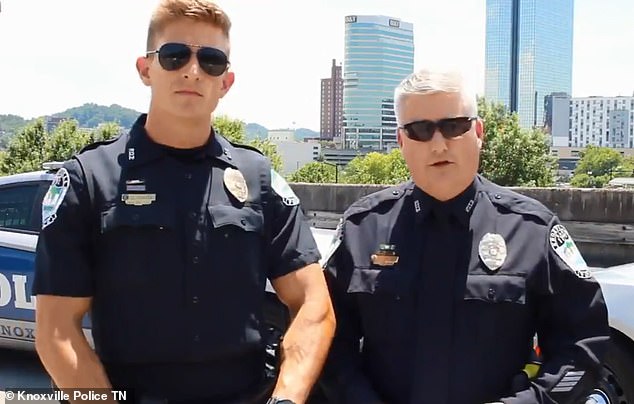 Viral: A video that sees two police officers explaining a new road safety law has gone viral, as social media users have revealed their infatuation with one of the men 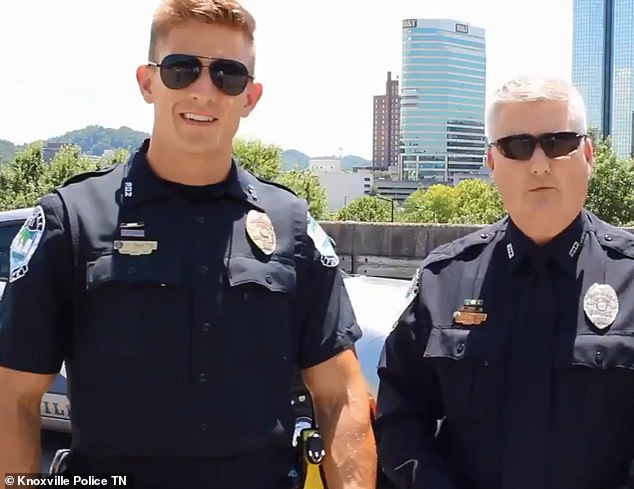 Law: Both police officers were seen explaining the law, which makes it illegal for people to hold a cellphone or mobile ‘with any part of their body’ while driving 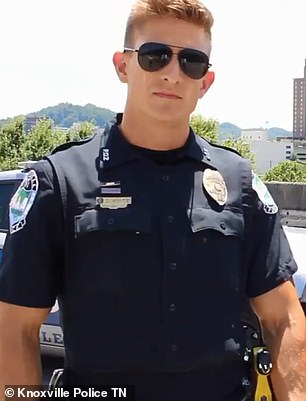 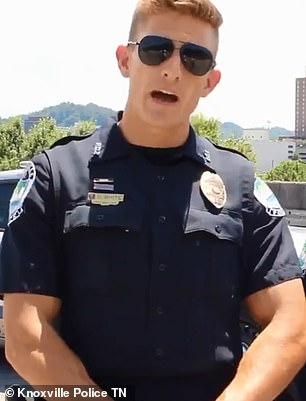 Popular: Since the clip was shared, it has gone viral, accumulating over 2,700 likes and a further 500 shares since it was uploaded last Friday

Both police officers were seen explaining the law, which makes it illegal for people to hold a cellphone or mobile ‘with any part of their body’ while driving. 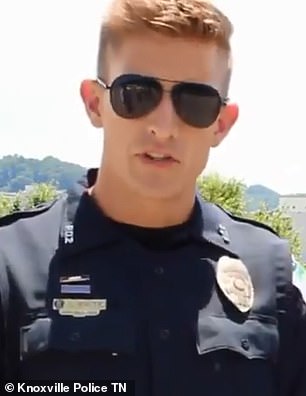 In demand: Dozens of social media users have swooned over Officer White, with some branding the cop ‘handsome’

In the clip, Officer White said the new law is for ‘your safety,’ before adding: ‘In 2018, Tennessee had 24,000 crashes that were just due to distracted driving.’

‘Again, this is for your safety, and everyone on the roadway’ Officer White said.

‘Tennessee is listed as having one of the highest death rates for distracted driving,’ he added, as he and Officer Wilson continued to elaborate on the law.

And since the clip was shared, it has gone viral. So far, the video has accumulated over 2,700 likes and 500 shares.

Many users have praised the new law, while some other have said it is too strict a punishment.

But despite the purpose of the video being about road safety, the video has gained popularity for another reason.

Wow! Some Twitter users have jokingly asked if the police officer is single, while others have said that they wouldn’t mind getting pulled over if Officer White was working

Dozens of social media users have swooned over Officer White, with some branding the cop ‘handsome’.

Others have jokingly said that they want the cop to ‘arrest’ them, while others have wondered if the officer could ‘personally explain’ the new law in more detail to them.

One woman commented on the clip, saying: ‘If the only way to meet officer white is to text and drive then you already know what I’m doing.’

Another Twitter user said: ‘Where does the officer on the left patrol EXACTLY??? #itsfriday.’

‘The guy on the left can come get me any day,’ a third user said, while another jokingly added: ‘Yo dude on the left u single?’

Similarly, another user said: ‘Is Officer White single? Asking for a friend.’

Meanwhile, one woman said: ‘Officer white…. cares about my safety. I think I need him to ride with me and make sure I don’t pick up any calls.

‘What days and where does Officer White work? I need him to personally explain this new law to me please,’ one user hilariously said.

Another user responded to the tweet, saying: ‘Yeah same I’m a little confused.’