Jeremy Hunt today tore into the for agreeing to put off his TV head-to-head with until after most Tory members have voted.

The Foreign Secretary said holding the showdown on July 16 was an ‘absolute joke’ as 90 per cent of the ballots will have been cast by then.

He raged that the corporation had ‘caved’ to Mr Johnson’s demands because they lacked the ‘courage’ to empty chair him.

The vicious backlash came as the gloves finally came off in the battle – with Mr Johnson’s campaign chief branding Mr Hunt a ‘pushover’.

Iain Duncan Smith jibed that the EU would just ‘laugh’ at Mr Hunt if he threatened to leave with No Deal after warning the consequences would be disastrous.

But ex-Cabinet minister Patrick McLoughlin said the attack showed that Mr Johnson’s team were ‘rattled’, adding: ‘Language like this is no way to unite the party or the country.’

Meanwhile, the race is embroiled in a ‘dirty tricks’ row amid claims the front runner’s campaign has been ‘cold calling’ party members. 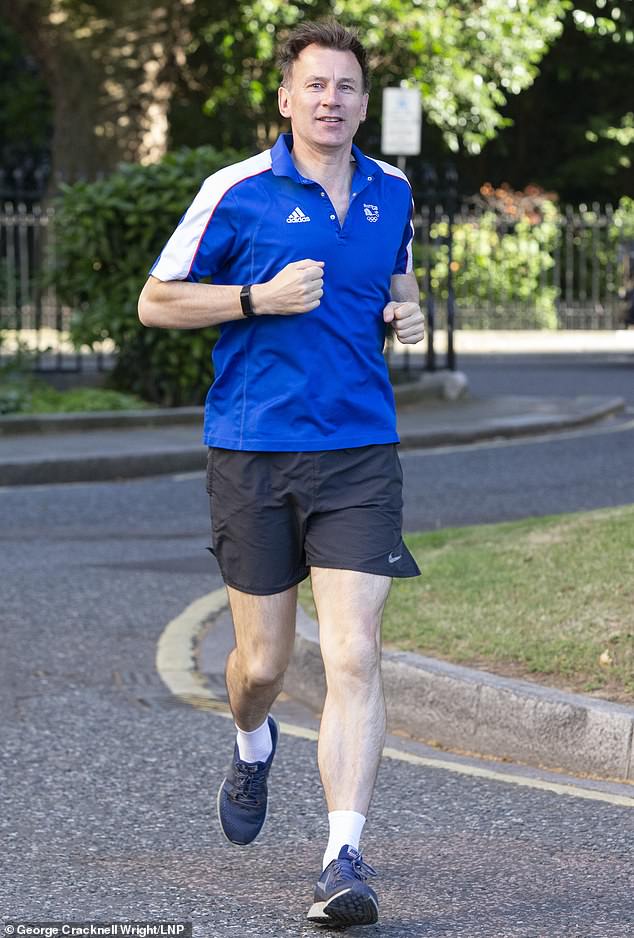 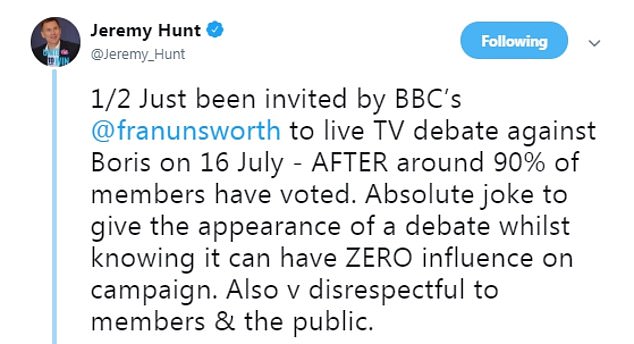 Former MP Ben Howlett said he had been contacted and questioned how they obtained his details – suggesting he will complain to the Information Commissioner.

A serving MP has also lodged a formal complaint with party chairman Brandon Lewis about the potential data protection breach.

The contest is cranking up a gear as the rivals prepare to take part in hustings in Northern Ireland this morning.

The pair are visiting Belfast as they seek to win over party members, and are likely to be quizzed on their proposals to resolve the Irish border issue and remove the controversial backstop.

Mr Hunt has said he believes there is ‘technology there now’ to provide a solution, while Mr Johnson has suggested the backstop issue could be solved during the implementation period.

Mr Hunt said the timing of a BBC showdown between the pair was an ‘absolute joke’ – suggesting Mr Johnson had forced a delay.

‘Just been invited by BBC’s @franunsworth to live TV debate against Boris on 16 July – AFTER around 90% of members have voted,’ Mr Hunt tweeted.

‘Absolute joke to give the appearance of a debate whilst knowing it can have ZERO influence on campaign. Also v disrespectful to members & the public.’ 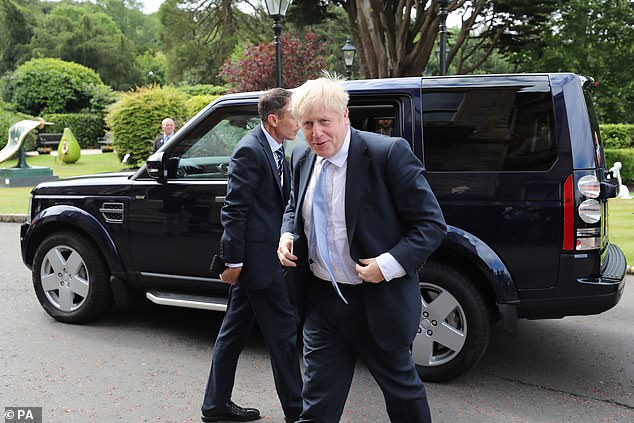 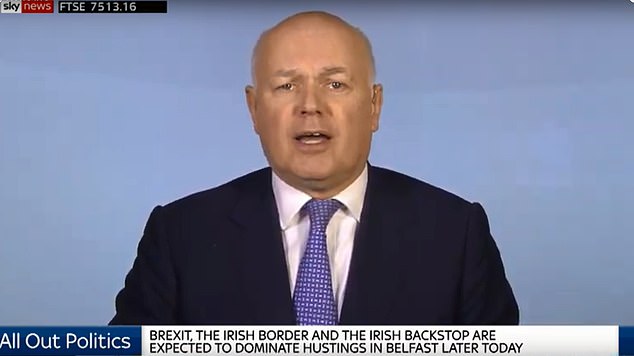 He added: ‘Other broadcasters had the courage to empty chair no shows. What happened to scrutiny without fear or favour at the BBC?

‘Many Beeb journalists will be deeply uncomfortable at this caving to Lynton Crosby. Come on BBC – this is for OUR PRIME MINISTER!’

Speaking on Sky News today, Mr Duncan Smith said: ‘If you do not have a clear point at which you leave the table then you become a pushover for them to put on you their view of life, and if they think you are scared they know in your heart you won’t make that decision to leave on the 31st.’

He added: ‘I would laugh if I was the EU and Jeremy Hunt came over and said we really hate the idea of leaving without a deal, we’re really scared of what happens, but look here we are serious about negotiating.

‘They’d be laughing behind their hands.’

He said: ‘I’ve had a conversation with Angela Merkel and… (she said) ‘of course we will look at any proposals made by a new UK prime minister’, because she wants to solve this problem.

Three million evacuated as deadly Typhoon Mangkhut dubbed the 'king of storms' hits China
More pentagon officials could be planning to resign in the wake of Mattis' departure
One of Britain's rarest dog breeds gets new litter of five puppies
What to do if you are one of Neil Woodford's hostages?
Princesses Beatrice and Eugenie head to media tycoon Evgeny Lebedev's Christmas party
Iranian protesters in Tehran turn against regime after military admits shooting down plane
Ministers 'furious' with NHS bosses failure to get to solve testing shortages
Father of three children who died in flat fire returns to the scene on Father's Day