The Dalai Lama has been forced to apologise for saying that any woman who succeeded him as a reincarnation ‘should be more attractive’.

The Tibetan spiritual leader said he was ‘deeply sorry’ and ‘genuinely meant no offence’ after his comment sparked a global backlash.

The monk’s office said his ‘off the cuff remarks’ had ‘lost their humour in translation’, insisting he was a strong supporter of women’s rights. 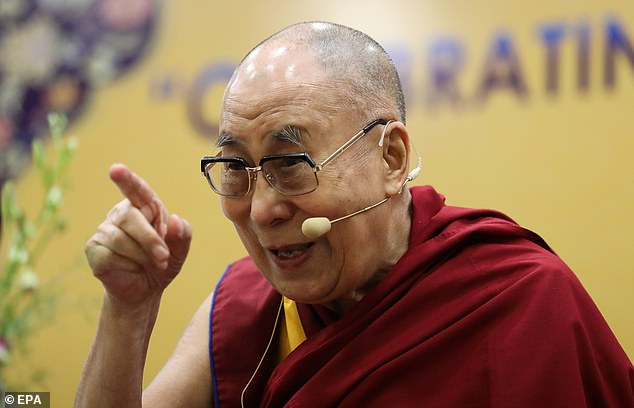 Each Dalai Lama is believed to be the reincarnation of his predecessor.

Last week, the current one, 83, was asked about the possibility that his own reincarnation could be a woman.

‘If female Dalai Lama comes, then she should be more attractive,’ he said.

He suggested that otherwise, ‘people I think prefer, not [to] see her, that face’.

A BBC interviewer had questioned the monk about similar comments he made in 2015 – when he suggested an unattractive female Dalai Lama would be ‘not much use’.

Today his office sought to limit the damage, saying: ‘Responding to a question about whether his own reincarnation could be a woman, and suggesting that if she were she should be attractive, His Holiness genuinely meant no offence.

‘He is deeply sorry that people have been hurt by what he said and offers his sincere apologies.’

‘His Holiness, a monk now in his mid-eighties, has a keen sense of the contradictions between the materialistic, globalized world he encounters on his travels and the complex, more esoteric ideas about reincarnation that are at the heart of Tibetan Buddhist tradition.

‘However, it sometimes happens that off the cuff remarks, which might be amusing in one cultural context, lose their humour in translation when brought into another. He regrets any offence that may have been given.

‘For all his long life, His Holiness has opposed the objectification of women, has supported women and their rights and celebrated the growing international consensus in support of gender equality and respect for women,’ it added. 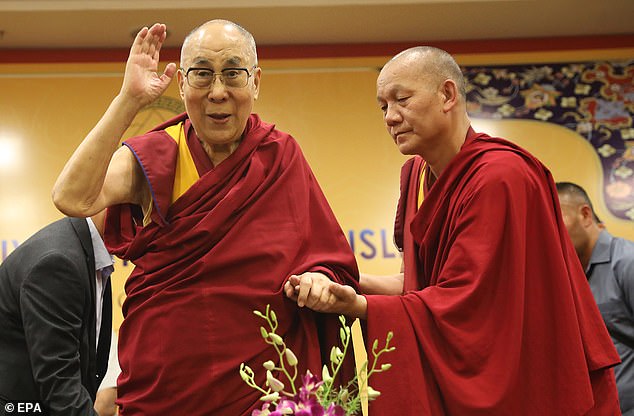 Each Dalai Lama is believed to be a reincarnation of his predecessor. The current one is pictured left at a conference with Muslim leaders in India last month

It said his original 2015 comments had been made to the Paris editor of Vogue magazine, suggesting he was unfamiliar with the context of such an interview.

‘He was at least partially responding to the unfamiliar ambience of working with a team whose prime focus was the world of high fashion,’ the statement said.

However, the Dalai Lama’s office did not row back critical comments about U.S. President Donald Trump, whom he accused of ‘lacking moral principle’.

Calling Trump’s emotions ‘a bit too complicated,’ he slammed the Republican’s America First slogan, saying: ‘That is wrong. America should take the global responsibility.’

The statement from his office made no reference to these comments.

He also reiterated his views on immigration into Europe, saying that the continent should educate and train immigrants with a view to them returning home.

The new communique said that these comments ‘may have been misinterpreted’, saying that he ‘appreciates that many of those who leave their countries may not wish or be able to return’.

‘His Holiness regularly cautions against allowing the divisive idea of ‘us’ and ‘them’ to flourish.

‘He suggests that a solution to many of the problems we face in the world today is to remind ourselves that as human beings we are all brothers and sisters belonging to one human family, and that together we can take action to address the global challenges that confront us.’