Temperatures are set to soar across the country with potentially dangerous heat in the northeast after the region recorded its first official heat wave of 2019.

Three days of 90 plus degrees Fahrenheit made it an official heat wave across Pennsylvania, New Jersey and New York.

At LaGuardia Airport and in Philadelphia temperatures reached 93 degrees on Friday.

to Nebraska saw temperatures go into the upper 90s. In Concordia, Kansas it hit a stifling 100 degrees. 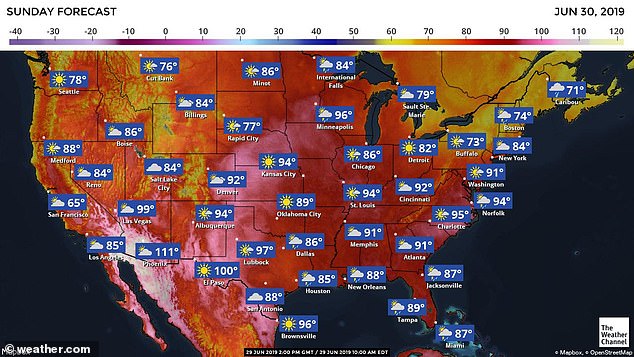 Three days of 90 plus degrees Fahrenheit made it an official heat wave across Pennsylvania, New Jersey and New York with more high temperatures forecast 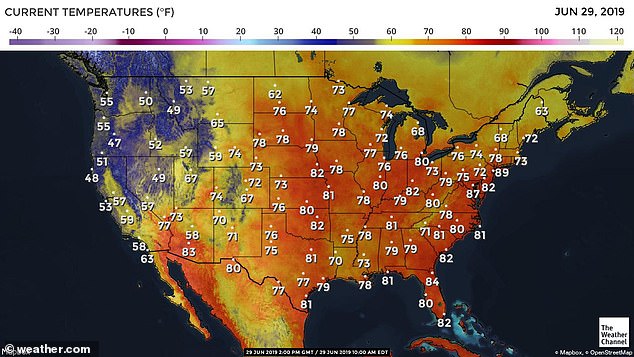 Warnings have been issued from there to Minnesota as heat and humidity approach dangerous levels.

In Minneapolis, where temperatures could reach 105 degrees on Sunday, extra heat alerts have been issued by The National Weather Service.

High temperatures are expected from the central Plains into the upper Midwest and mid-Atlantic across Saturday and Sunday, reports.

AccuWeather meteorologist Ryan Adamson said: ‘With the hot, stagnant air remaining parked over the area for several days, air quality will begin to deteriorate by the end of the week and into the weekend.

‘There will also not be too much cooling at night, especially in urban areas, resulting in higher electric bills as cooling demand increases around the clock.’

Code Orange alerts have been issued regarding air quality for New York City, Philadelphia and Baltimore.

In Philadelphia and New York City it is forecast to hit 94 or 95 degrees on Saturday.

Chicago too had it’s first 90 degree day this year earlier in the week.

And in Florida, Tampa and Miami hit 98 degrees earlier this week. That equals their second-hottest all-time temperature on record.

A storm system is approaching the northeast with the bad weather expected to hit Washington, D.C., to Boston Saturday afternoon.

It is expected to last into the early evening and could mean localized flash flooding.

Looking into next week temperatures are expected to drop but the heat is expected to return to the east coast by the middle of next week.

By the Fourth of July holiday it seems a hot and stormy weekend is on the cards.