Temperatures in Europe have started to cool today from 114F down to 99F after record temperatures sparked wildfires and killed five in the last two days.

While ‘s highest temperature on record was registered in the Gard yesterday at 114F (45.9C), today the area saw a drop of 15 degrees with the mercury rising to 99F (34C).

And gay pride revellers were forced to cool down under a municipal water spray fountain as they took part in the parade in Paris today — where temperatures reached 96F (36C). 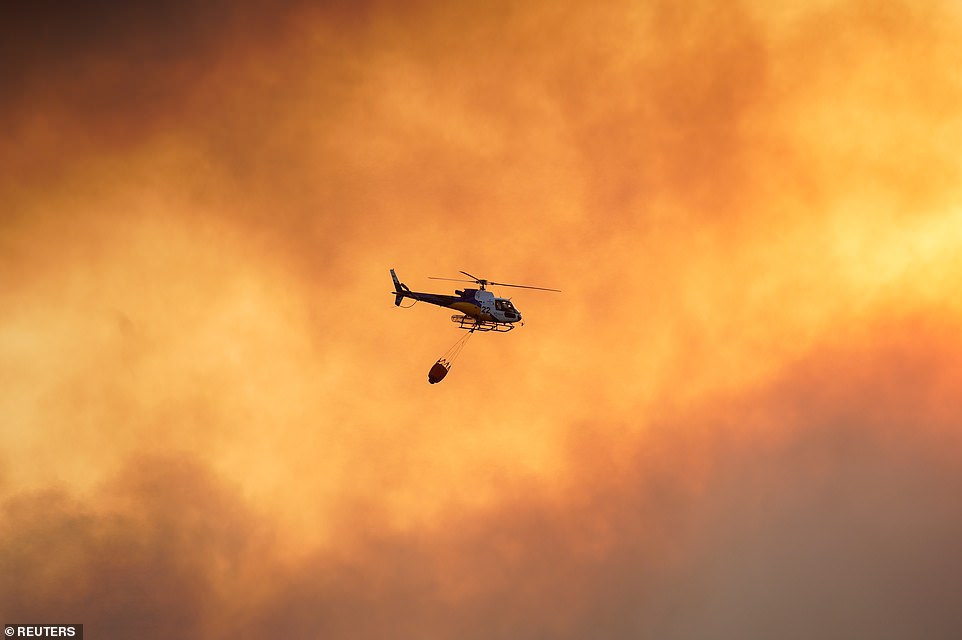 A blaze near the city of Toledo in Spain forced the evacuation of 22 residents, as water-dropping aircraft assisted firefighters on the ground 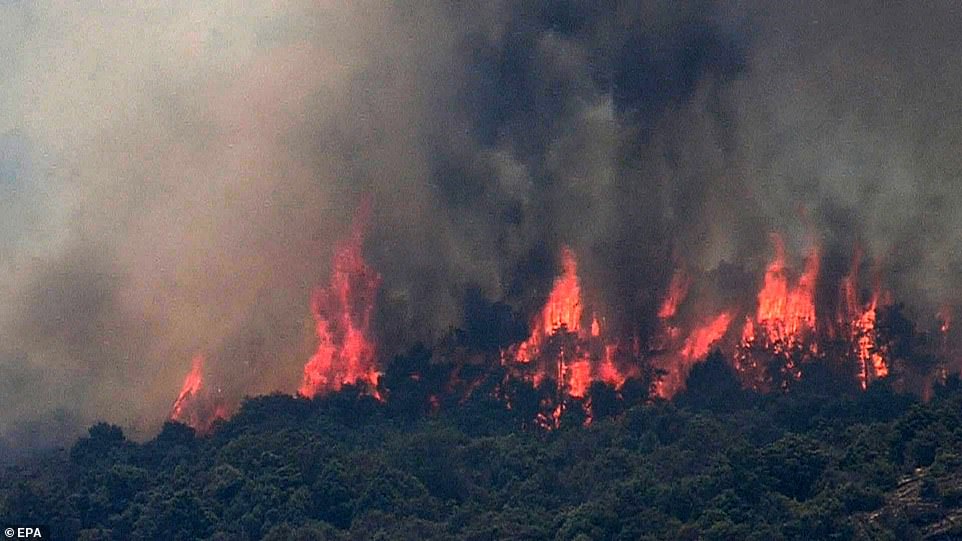 The highest temperature in Europe was found in Madrid today where the mercury reached 102F (39C).

More than 700 firefighters and ten aircraft were mobilised to tackle the fires in the Gard, some of which caused sections of motorways to be temporarily closed.

Despite highs still rising to almost 100F temperatures will begin to fall over the next few days, to 94F (34C) in the Gard by Wednesday.

French media said a man had been arrested for deliberately starting fires in one Gard village. 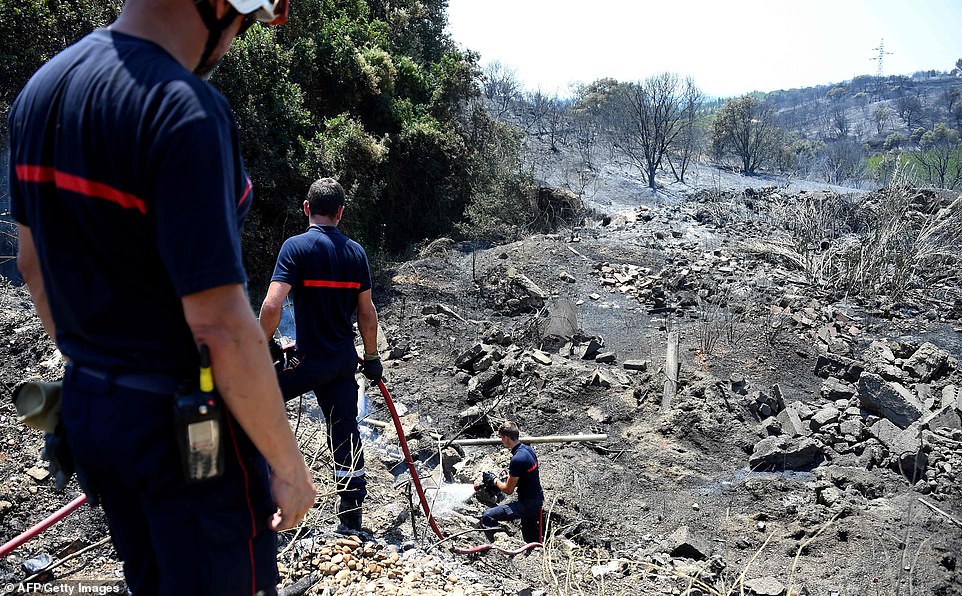 In Saint Gilles, in the Gard region of France, a fire broke out which burned 620 hectares and 700 firefighters were deployed to tackle it 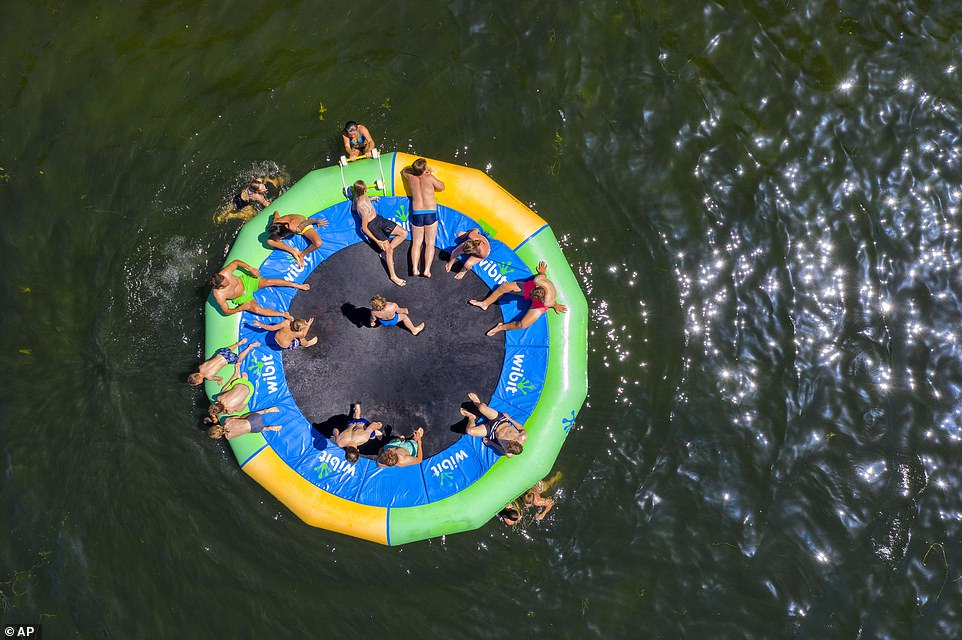 People enjoy the hot summer weather on a water trampoline at a lake in Moers, Germany, today, amid a heatwave across Europe

Further north, Paris was due to experience its hottest day of the heatwave so far with a predicted high of 37 degrees.

Authorities in the capital maintained a ban on driving older cars to curb heatwave-related pollution.

The World Meteorological Organisation said this week that 2019 was on track to be among the world’s hottest years, and 2015-2019 would then be the hottest five-year period on record.

It said the European heatwave was ‘absolutely consistent’ with extremes linked to the impact of greenhouse gas emissions. 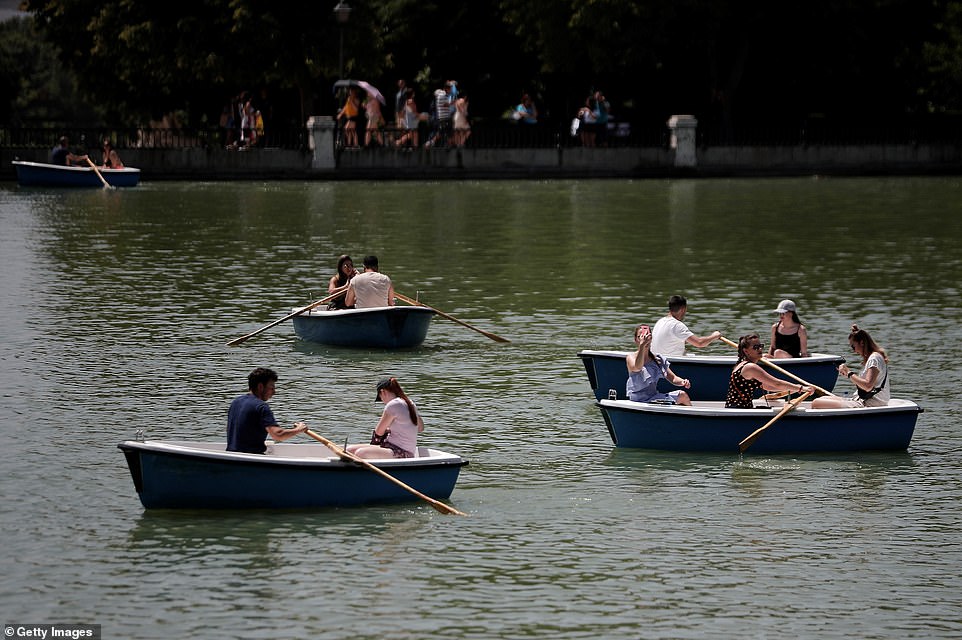 In Madrid, many made the most of the heatwave by taking to the water in a lake in Retiro Park as temperatures rose above 100F 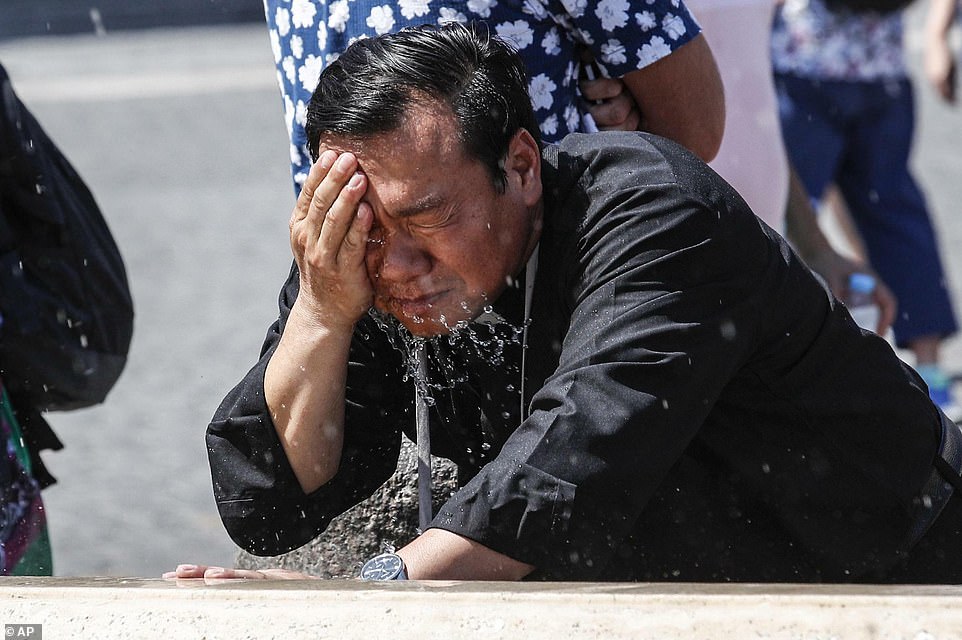 A priest cool-offs in the fountain of St. Peter Square at the Vatican this afternoon. Italy put 16 cities under alerts for high temperatures, and civil services distributed water to tourists 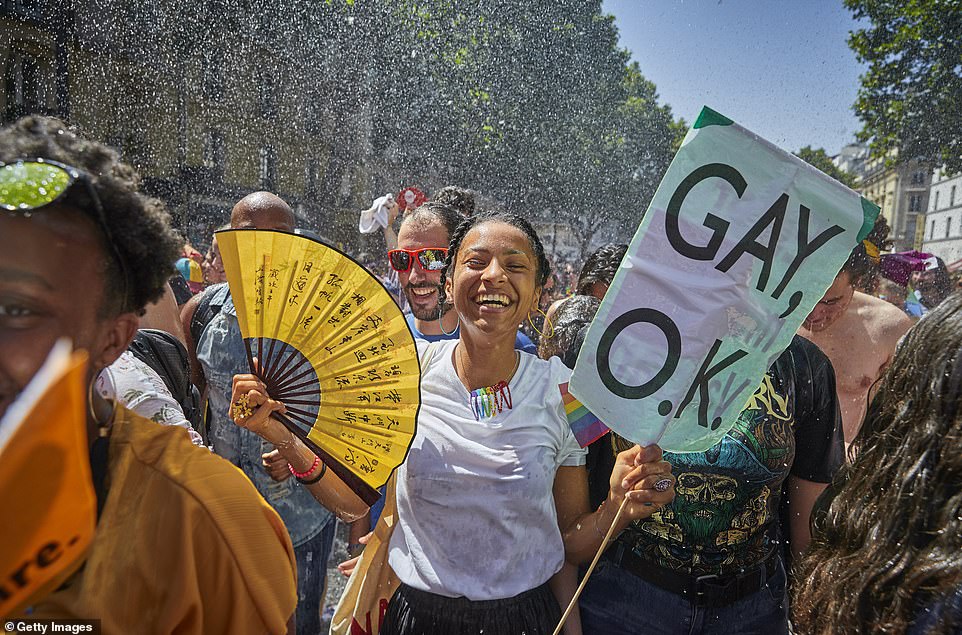 For a fourth consecutive day, unusually high temperatures above 43 degrees were forecast on Saturday across Spain.

Forty of the Spain’s 50 regions have been placed under weather alert, with seven of them considered to be at extreme risk, the national meteorological agency said.

In the northeastern city of Girona, the mercury reached a record high of 111F (43.9C) on Friday, the Catalan city’s highest-ever temperature on record.

Firefighters managed to contain 90 per cent of the wildfires that raged across 60 sq km (23 sq miles) of land in the northeastern Tarragona province, the Catalan government said today.

Two other wildfires in the central Toledo region were still burning, officials said. 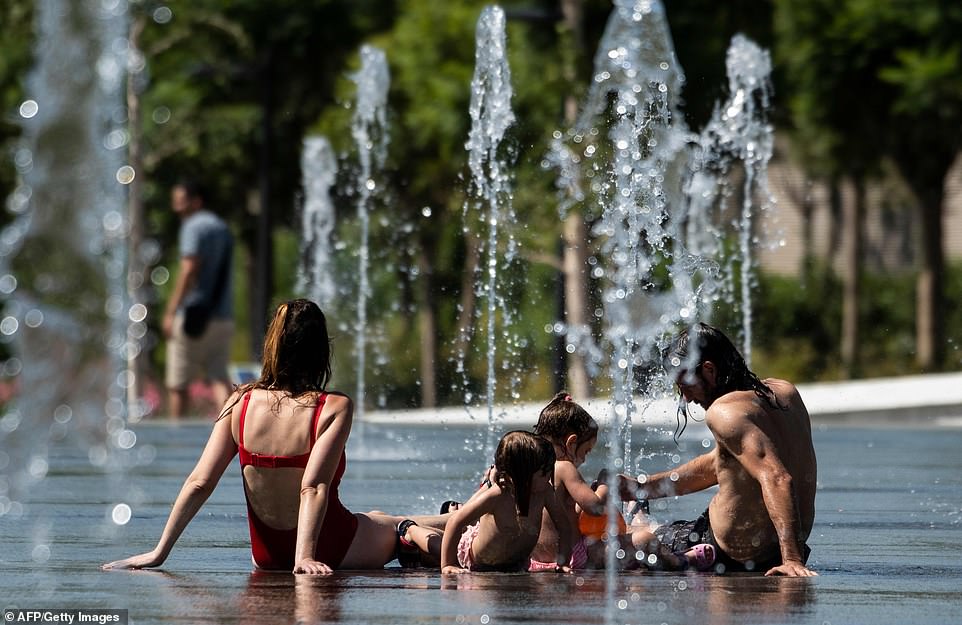 People cool off in water fountains at Parc Central amid a heatwave in Valencia today. Spain was hit by more wildfires as temperatures remained sky high 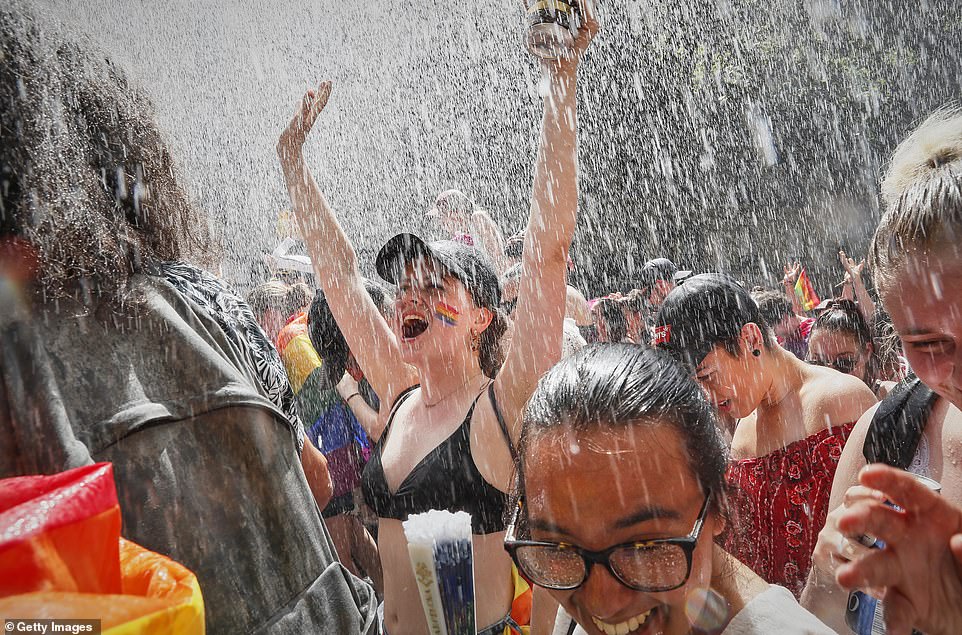 The heat killed at least three people as temperatures soared in central and northern Italy, while hospitals in the financial capital Milan saw a 35 per cent rise in emergency visits due to heat-related conditions, local media reported.

Demand for power in the city surged as people cranked up air conditioning causing sporadic blackouts in stores and restaurants. Temperatures are forecast to ease in the coming days but will remain hot.

France’s new record temperature of 114.62F (45.9C) was registered on Friday in Gallargues-le-Montueux, a village in the southern department of Gard near Montpellier, breaking successive records set earlier in the day, Meteo-France said. 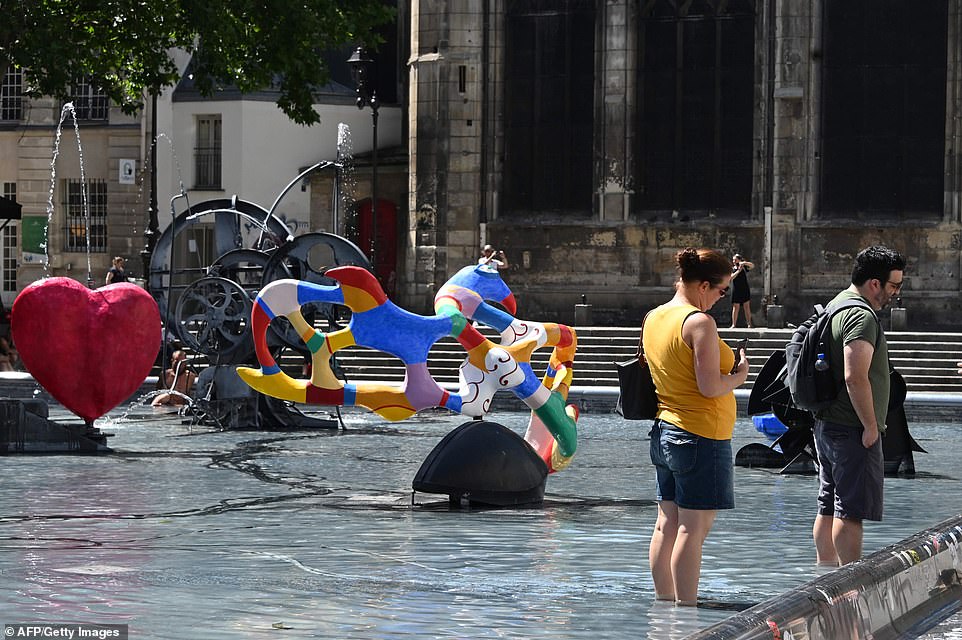 Two people soak their feet in the water of in the Stravinsky fountain in Paris on June 29, 2019, during today’s heat wave. Europe is bracing itself for a deadly heatwave

The weather service said the new high was comparable to August temperatures in California’s Death Valley.

Earlier Friday, the mercury rose above 111.2F (44C) in the southeastern French town of Carpentras. The town was deserted, with cafe owners contemplating empty terraces which would normally be packed.

‘We have never seen this!’ one exclaimed.

The hot spell has also sparked large blazes including in Spain, where fire fighters on Saturday fought fresh wildfires in strong winds and blistering heat just as they had managed to finally contain another inferno after nearly 72 hours.

Meteorologists blame a blast of hot air from northern Africa for the scorching early European summer, but the heat is due to die down from Sunday.

Solely ONE particular person has been charged after Chicago's most violent weekend of the 12 months ...
Woody's real life Manhattan Lolita: A secret affair with a 16-year-old schoolgirl
Kevin Hart reveals may still take Oscars hosting job as Ellen DeGeneres lobbies for his return
Boy 'forced to wet himself in front of the class, and sit in urine soaked clothes' at LA school
Adelaide River man saved from massive saltwater crocodile due to barbed wire fence
Donald Trump 'used Asian accent to mock US allies South Korea and Japan at Hamptons fundraiser'
Is using hand sanitiser to beat coronavirus RUINING your skin?
Parents of boys who were killed forgive the man who 'rammed their sons' car off the road'