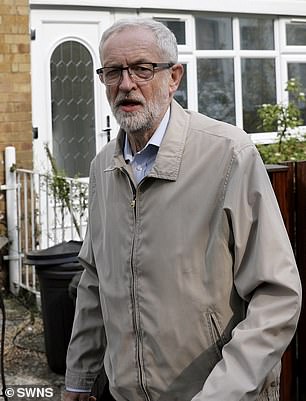 Mandarins discussed the Labour leader’s future at an event this month as rumours mount that he is ‘losing his memory’. Mr Corbyn is seen outside his home on April 17

Jeremy Corbyn has called for an inquiry into the civil service to find out which mandarin leaked claims that he is ‘too frail’ to be Labour leader and is ‘losing his memory.’

An article published in the Times on Saturday quoted two ‘senior civil servants’, with one suggesting there are concerns in Whitehall that the 70-year-old has become ‘too frail and is losing his memory’.

Mr Corbyn called the report a ‘farrago of nonsense’ and described himself as a ‘very fit, very health, very active person’.

‘The idea that civil servants should be briefing a newspaper against an elected politician, against a prospective government, is something that should be very concerning to a lot of people,’ he said.

He added: ‘There must be an investigation into which senior civil servants are spreading fictitious information to the press and in the process compromising the integrity of the civil service.’ 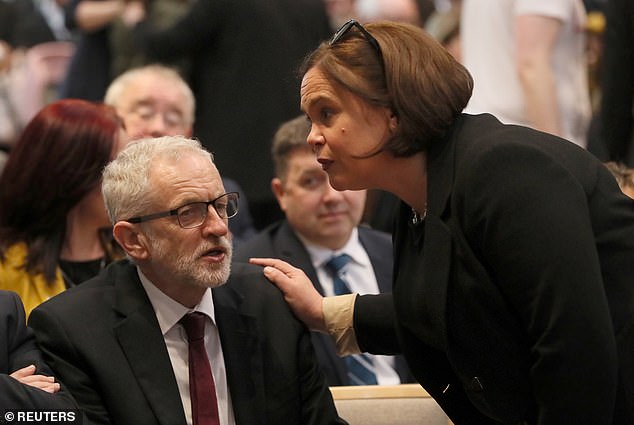 One senior civil servant went as far as to say Mr Corbyn, 70, is not firing ‘on all cylinders’. He is seen at the funeral service for murdered journalist Lyra McKee at St Anne’s Cathedral in Belfast on April 24

One senior civil servant told : ‘When does someone say [he] is too ill to carry on as leader of the Labour Party let alone prime minister?… He is not functioning on all cylinders.’

Another said: ‘There is a real worry that the Labour leader isn’t up to the job physically or mentally but is being propped up by those around him.

‘There’s growing concern that he’s too frail and is losing his memory. He’s not in charge of his own party.’

Another well-connected adviser said: ‘We have heard he has had a mini stroke about two to three months ago.’

There were also claims circulating among Labour MPs that Mr Corbyn could step down at the party conference in autumn, to be replaced by 39-year-old shadow business secretary Rebecca Long-Bailey.

It also emerged in March that Mr Corbyn was being treated at Moorfields eye hospital in London for ongoing ‘muscle weakness’ in his right eye.

He was using corrective glasses – which he is often seen wearing – as part of the treatment, a Labour Party spokesman said at the time.

The recent health claims come as insiders report a ‘toxic atmosphere’ in Labour – with at least eight former members of staff signing gagging orders forbidding them from discussing their experiences of working for the party.

One visitor to Mr Corbyn’s office described being ‘jabbed in the chest’ by her, while an official who had fallen out of favour returned to find their desk had been moved.

It was even claimed the office was like Soviet Russia, with advisers wanting to ‘purge non-believers’.

Others described concerns the party was being controlled by the likes of Ms Murphy, shadow chancellor John McDonnell and Mr Corbyn’s spin doctor Seamus Milne rather than the leader himself.

The decision to expel Alistair Campbell for voting Lib Dem was taken without his approval, according to one of his friends.

A Labour Party spokesman said My Corbyn is in good health and leads an active life, including regular cycling and running up to 4 miles.

The spokesman also said the suggestion Mr Corbyn was not the man in charge was laughable and ‘demonstrably false’.

Yesterday, Mr Corbyn raised eyebrows when he shut his wife in the porch of his north London home in a rush to avoid the photographers outside.

By Daniel Martin, Policy Editor for the Daily Mail

A survey by Ipsos Mori found that Mr Corbyn was now the worst-polling leader of the Opposition since the question was first asked in 1978.

A massive 75 per cent of voters said they were dissatisfied by his performance, compared with just 17 per cent who were satisfied – a net satisfaction rating of minus 58 per cent. 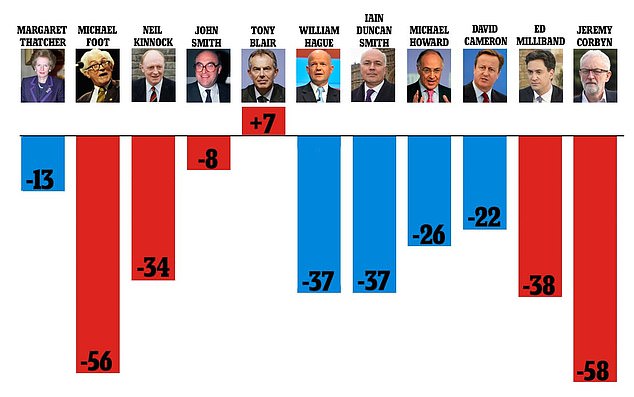 Pluses and minuses: Overall worst approval ratings for each opposition leader since 1977

This compares with Mr Foot’s worst rating of minus 56 per cent (13 per cent satisfied, 69 per cent dissatisfied) which was recorded in August 1982, when Margaret Thatcher was Prime Minister and two months after the liberation of the Falklands.

By contrast, she never polled lower than minus 13 when she was Opposition leader.

Former Labour leader Ed Miliband’s worst rating occurred in December 2014, when he scored a net satisfaction score of minus 38 per cent.

Tory leaders William Hague and Iain Duncan Smith both hit minus 37 at their lowest point.

Tony Blair was the only Opposition leader who consistently had a positive satisfaction rating. His worst score was plus 7 per cent, recorded in September 1996.

Japanese man 'marries' a virtual reality singing hologram
Day Four of our exclusive extracts from the best stories to tell YOUR children this festive season
What is the backstop and why is it so toxic and what ARE Theresa May's options now?
Our VERY modern Christmas!
New dating trend inspired by doomed Fyre Festival
Victoria Beckham 'is helping Meghan spruce up her new home'
PhD student uncovers a secret eight-line poem by celebrated poet Siegfried Sassoon penned to a man
Drunk man Lee Abbott admits stabbing Widnes pub landlord to death on police bodycam