Rapinoe, who once again refused to sing the national anthem before the game, netted a free kick in the fifth minute with a low shot under the feet of the French defense.

France’s goalkeeper Sarah Bouhaddi nearly got a boot on the ball, but the free kick still managed to find the net without being deflected.

Both teams were seen emphasizing water breaks during stoppages on Friday as Paris remains in the midst of a record-breaking heat wave. 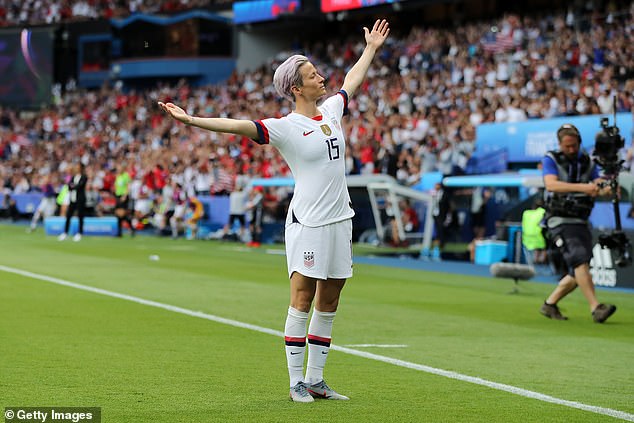 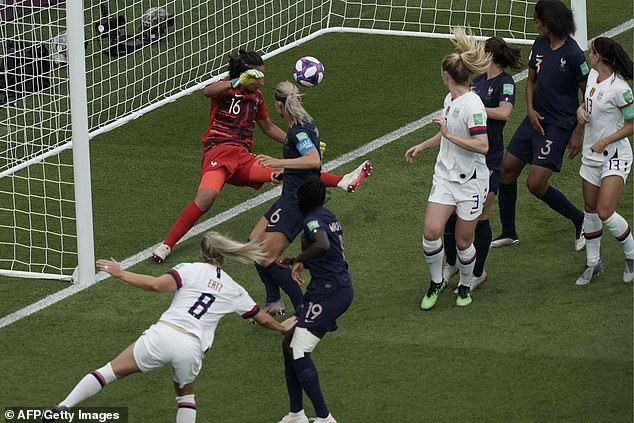 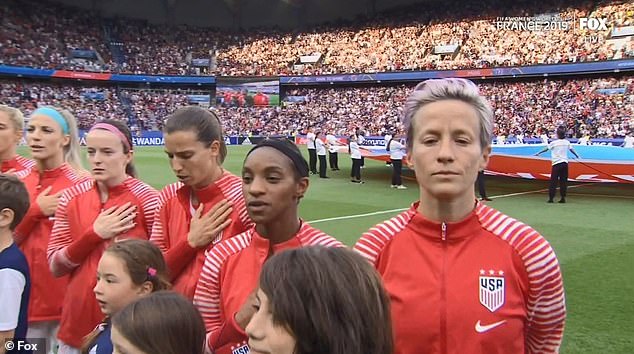 Rapinoe (right), who previously knelt during the national anthem, once again refused to place her hand over her heart or sing ‘The Star-Spangled Banner’ before Friday’s game. However, several other members of the team and coaching staff refrained from signing or placing their hands over their hearts, as well. Rapinoe’s anthem etiquette has been a source of controversy

The veteran midfielder has been at the center of controversy this week after a previously recorded interview surfaced in which Rapinoe said she would ‘not visit the f***ing White House’ if the U.S. goes on to win the World Cup.

Rapinoe’s comments were made just a day after the president said her refusal to sing the national anthem or place her hand on her heart during its playing before matches was inappropriate.

Rapinoe, who is a lesbian, is one of the most outspoken athletes representing America and has described herself as a ‘walking protest’ to Trump’s policies.

She was the first national team member of any sport to kneel in support of former NFL quarterback Colin Kaepernick – a frequent target of Trumps since he began protesting inequality by kneeling during the ‘Star Spangled Banner.’

Kaepernick has been out of the NFL since March of 2017, but other players have continued protesting before games in his place.

On Thursday, the day before the match, she said she stood by her comments, except the coarse language.

‘I stand by the comments that I made about not wanting to go to the White House with exception of the expletive,’ she said. ‘My mom will be very upset about that.’

She even suggested the uproar might help her team.

‘I think, if anything, it just fires everybody up a little bit more,’ she said.

With a win on Friday, the U.S. would move on to face England in the semifinals on Tuesday. 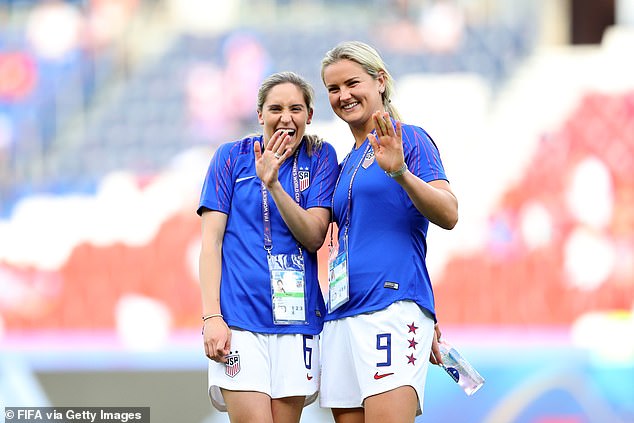 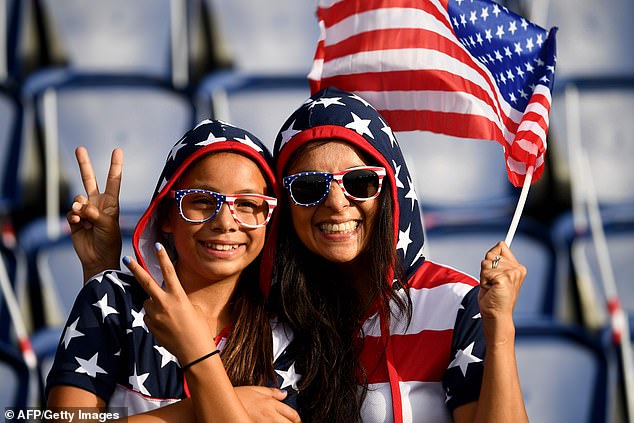 Midfielder Lindsey Horan was not in the starting lineup for Friday night’s quarterfinal match against France at the Women’s World Cup.

It was the second straight match that Horan had not started, although she came in as a substitute in the 89th minute of the United States’ 2-1 victory over Spain on Tuesday to open the knockout round.

Coach Jill Ellis stuck with the starters she used against Spain, replacing Horan in the midfield with Sam Mewis. Alex Morgan, Megan Rapinoe and Tobin Heath were up top, with Mewis, Rose Lavelle and Julie Ertz in the midfield.

Goalkeeper Alyssa Naeher and defender Abby Dahlkemper both made their fifth straight starts in France. Becky Sauerbrunn was at center back for the third straight game alongside Dahlkemper, with Kelley O’Hara on the right and Crystal Dunn on the left.

Having previously won three World Cups, the Americans were the favorites entering the tournament, and have looked every bit the part. After their record-breaking 13-0 win over Thailand in the Group F opener – when they were widely criticized for elaborately celebrating each of the goals – the U.S. women have gone on to beat Chile and rival Sweden by a combined 5-0.

Two penalty kicks from captain Megan Rapinoe helped propel the U.S. to a win over upstart Spain in the round of 16.

Les Bleues (the nickname for France’s team), ranked No. 4 in the world, finished atop its group before overcoming a determined challenge from Brazil on Sunday night to reach the quarterfinals.

France also reached the quarterfinals at the 2015 World Cup in Canada but fell to Germany on penalties after a 1-1 draw. The team’s best finish at the tournament was fourth in 2011 after losing 2-1 in the third-place match to Sweden. France had lost 3-1 in the semifinals to the Americans. 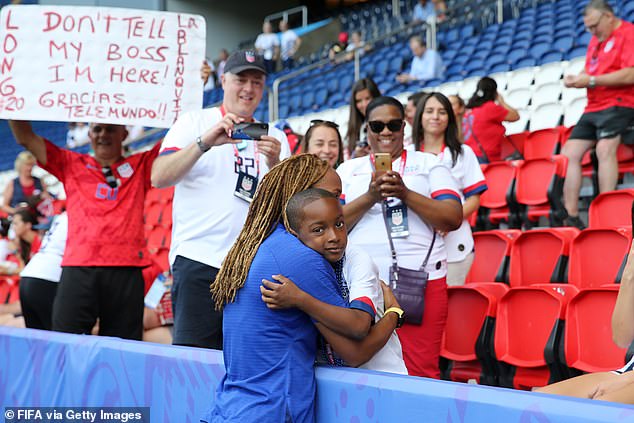 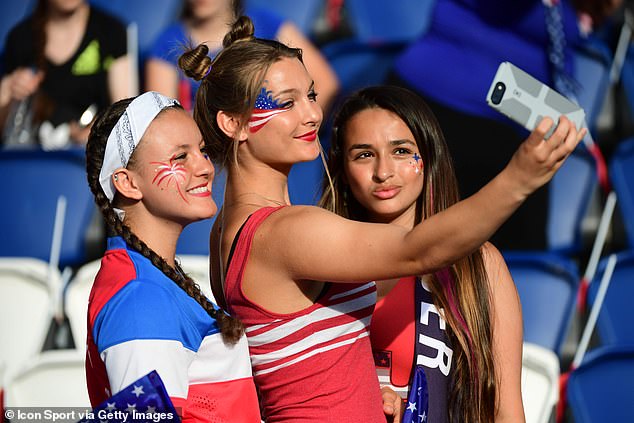 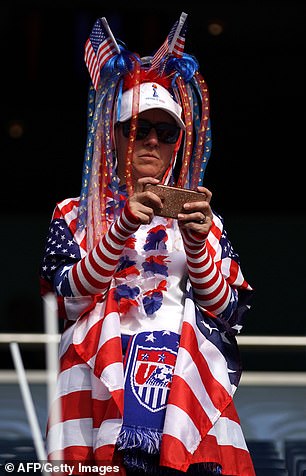 Although the U.S. has enjoyed favorable crowd support throughout the tournament, Friday’s game against host nation, France, will likely be a different situation entirely

But France has seen its profile rise considerably in recent years, coinciding with the growth of its domestic professional league. Seven players on France’s roster play for Lyon, which routed Barcelona 4-1 to win the women’s Champions League for the fourth straight year and sixth time overall.

‘From where we were four years ago, and where France was four years ago, I think both of us are much stronger teams. I think just the women’s game in general has grown tremendously,’ U.S. star Megan Rapinoe said. ‘I guess the task for each team is to be the team that is growing as fast as the game is, keeping up on that and even being the one that is pushing the game forward.’

France is seeking to become the first nation to simultaneously hold the men’s and women’s World Cup trophies. The men won last year in Russia.

The American women have played the French 23 times, with France winning just three. But the last three matches have tilted toward France, with two wins and a draw. The last meeting was a friendly in January, when Kadidiatou Diani – who wasn’t named to France’s World Cup roster – scored twice in a 3-1 victory.

‘It’s impossible to have any pressure. Quite the opposite, in fact. It’s additional motivation for us. We’re coming up against the best team in the world. So the only pressure we have is to have a good performance,’ Diacre said. 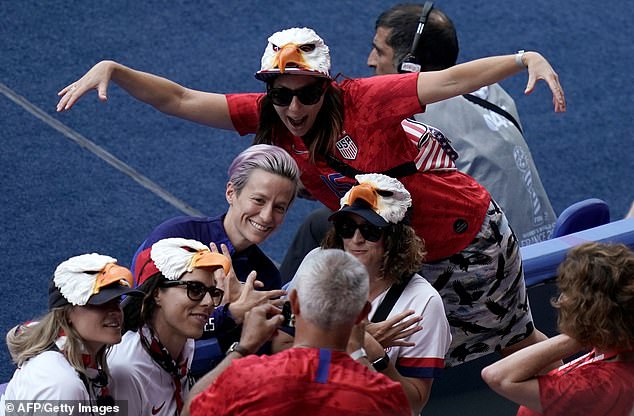 Before the game captain Megan Rapinoe was seen interacting with fans at Parc des Princes, some of whom donned hats made to look like the country’s national bird, the bald eagle