After a fallow year, the greatest music show on Earth returns today at Glastonbury. Thousands have pitched their tents, but armchair viewers can enjoy the action without getting sunburnt. Here are some of the highlights to watch out for . . .

The weekend’s marathon opens with a live preview on The One Show (BBC1, 7pm) before the entertainment begins in earnest with Jorja Smith (BBC2, 7.30pm). The Walsall singer began writing songs while working in a coffee shop and got her big break when she sang with R&B superstar . She has since won a Critics’ Choice Award and secured a top three album. Her thoughtful lyrics and jazzy grooves should illuminate the West Holts Stage.

The rise of Michael ‘Stormzy’ Omari from the grime music underground to Glastonbury’s Pyramid Stage has been astonishing. Like the Arctic Monkeys in 2007, the double Brit winner is a Friday night headliner on the strength of just one album. Rap has an uneven history at the festival — Jay-Z stole the show in 2008; Kanye West was underwhelming in 2015 — but Stormzy has the raw talent and energetic presence to step up in style, and we may well see a gospel choir for the hymn-like Blinded By Your Grace (BBC2, 9.50pm). 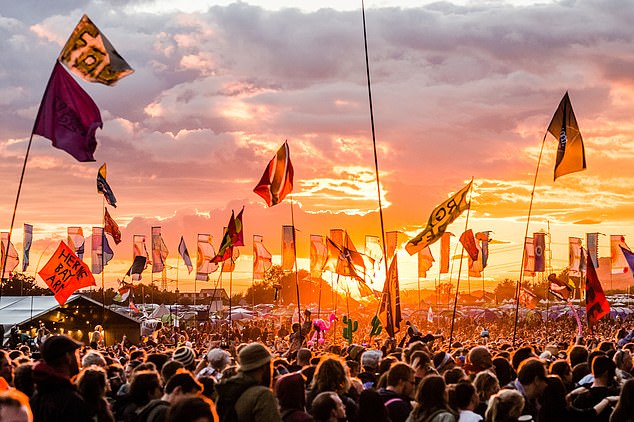 After a fallow year, the greatest music show on Earth returns today at Glastonbury. Here are some of the highlights to watch out for . . . 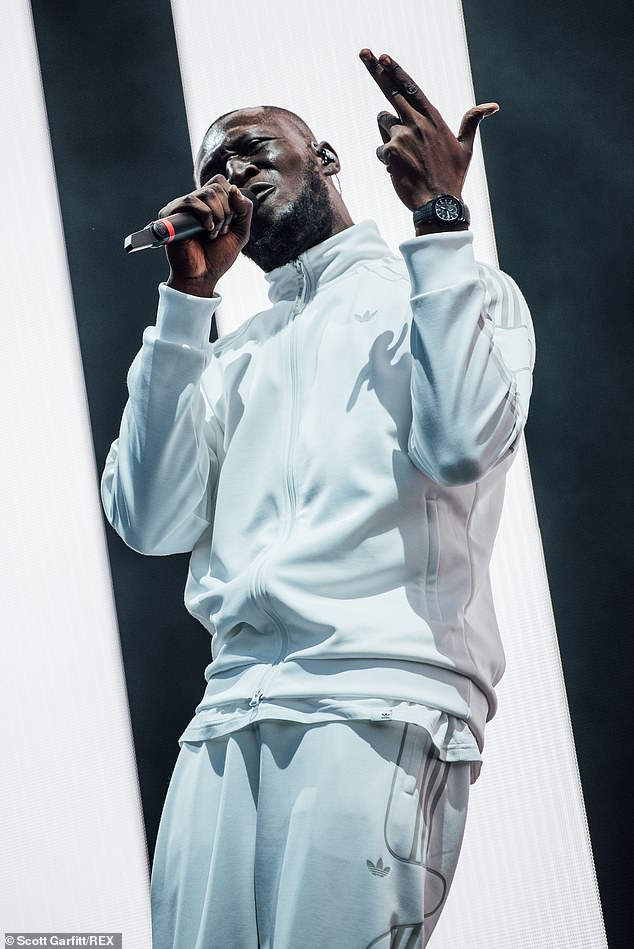 The rise of Michael ‘Stormzy’ Omari from the grime music underground to Glastonbury’s Pyramid Stage has been astonishing, says Adrian Thrills

Producer Mark Ronson says Tame Impala (BBC4, 10pm) are his favourite rock act. The Aussie band’s guitar-driven psychedelia is tailor-made for the festival stage, especially as it comes with a tuneful, poppy edge. Singer Kevin Parker is a fan of Britney and Kylie — and it shows.

Sheryl Crow (BBC iPlayer, 2.30pm) will aim to turn the Pyramid Stage into the Friday Afternoon Music Club with carefree hits such as All I Wanna Do, while Bastille will mix tracks from ambitious new album Doom Days with earlier hits including Pompeii (BBC iPlayer, 4.15pm). With an injury-stricken Snow Patrol having had to pull out this week, ‘Madchester’ veterans The Charlatans have stepped in at short notice (BBC iPlayer, 6.30pm).

There should be plenty of self-deprecating banter from Capaldi (BBC iPlayer, 4pm). The likeable Scot, a distant relative of actor Peter Capaldi, has won plaudits for his soulful pop songs (Someone You Loved spent seven weeks at No 1) and irreverent Twitter feed (check out a hilarious spat with Noel Gallagher). The Other Stage awaits his boy-next- door charm.

Ten years after her brother Michael’s death coincided with Glastonbury 2009, Janet will transport lovers of funk and R&B back to the Eighties with the sassy hits What Have You Done For Me Lately and Control (BBC2, 7.30pm). Expect dancers in skin-hugging leather, but hopefully no wardrobe malfunctions along the lines of her infamous 2004 Super Bowl mishap.

The Mancunian motor-mouth twice headlined Glastonbury with Oasis and returns tomorrow as a warm-up to headliners The Killers. Expect big tunes — ‘the classics, but done my way’ — and plenty of attitude. Oasis standards Roll With It and Champagne Supernova should feature — alongside a dig at estranged brother Noel (BBC4, 9pm). 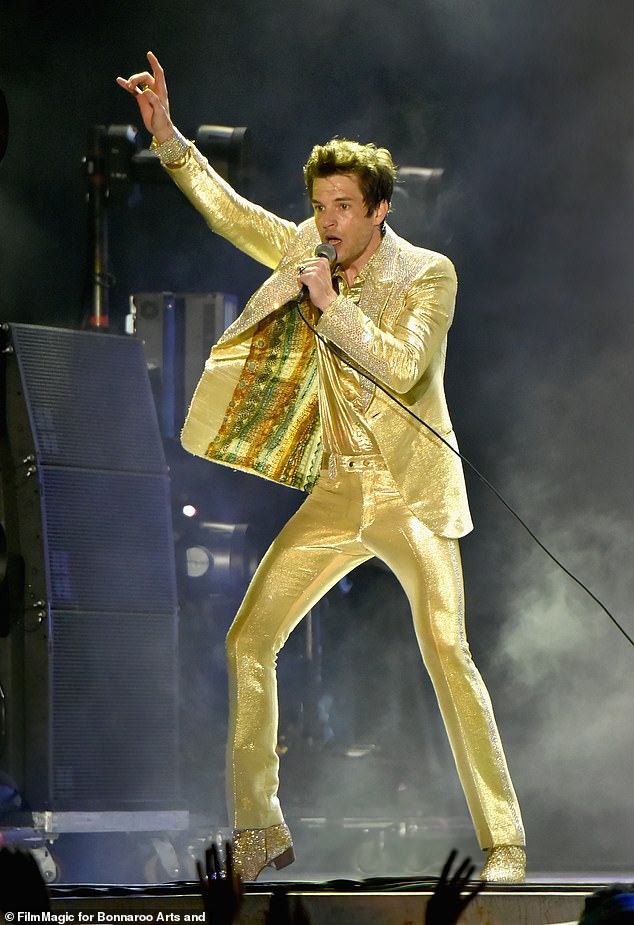 The Killers (pictured: Brandon Flowers) will be hoping to emulate their showing in 2005 when they supported The White Stripes 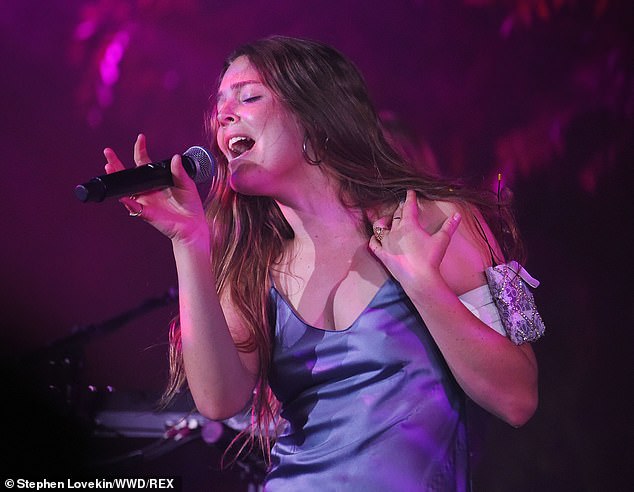 The Las Vegas rockers played one of their most memorable gigs supporting The White Stripes at Glastonbury in 2005 and will be hoping to emulate that showing rather than 2007’s shoddy sequel (BBC2, 9pm). The omens are good. Latest album Wonderful Wonderful was a return to form, and older hits such as Mr. Brightside are cast-iron crowd-pleasers. Singer Brandon Flowers will also want to put on a strong showing ahead of The Cure’s set on Sunday. He acknowledges the latter as a formative influence.

For those looking to rave rather than rock, the clubland stalwarts will provide a vibrant audio-visual spectacle (BBC4, 10pm). Tom Rowlands and Ed Simons reinvigorated British dance in the Nineties and their block-rocking beats were gloriously intact on recent album No Geography.

Which of Miley’s incarnations will turn up? Will it be the provocative firebrand of 2013’s Wrecking Ball, the cowgirl of 2017’s Younger Now, the Disney starlet of Hannah Montana — or a mix of all three? It should be fascinating, especially if dad Billy Ray or recent collaborator Mark Ronson turn up (BBC iPlayer, 5.45pm).

The Sunday ‘legends’ spot always draws a huge tea-time crowd. With Kylie following in the footsteps of Dolly Parton and Lionel Richie, this year should be no exception (BBC1, 6pm). Forced to cancel an appearance at Worthy Farm after being diagnosed with breast cancer in 2005, the perennial pop princess will be keen to make up for lost time. 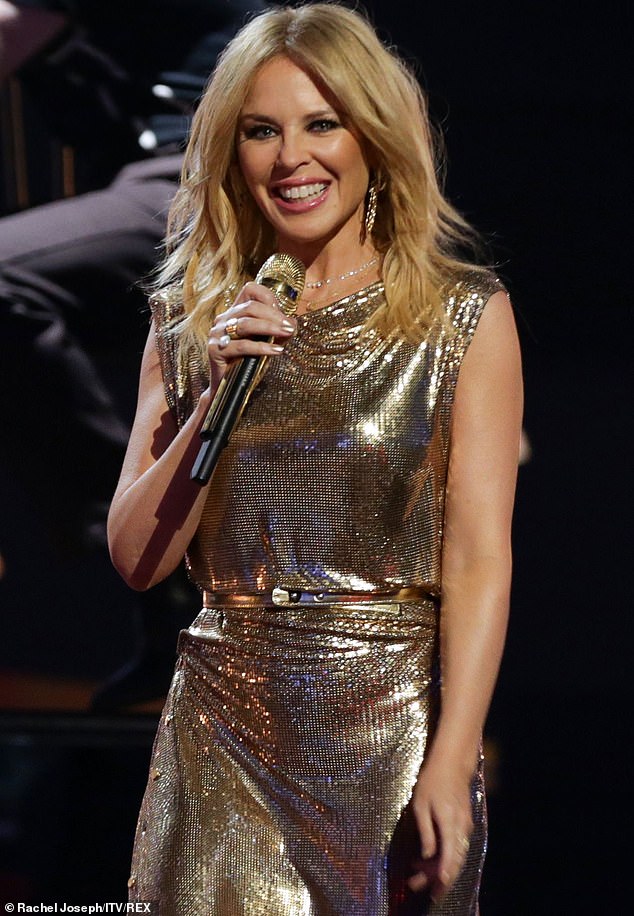 The Sunday ‘legends’ spot always draws a huge tea-time crowd. With Kylie following in the footsteps of Dolly Parton and Lionel Richie, this year should be no exception 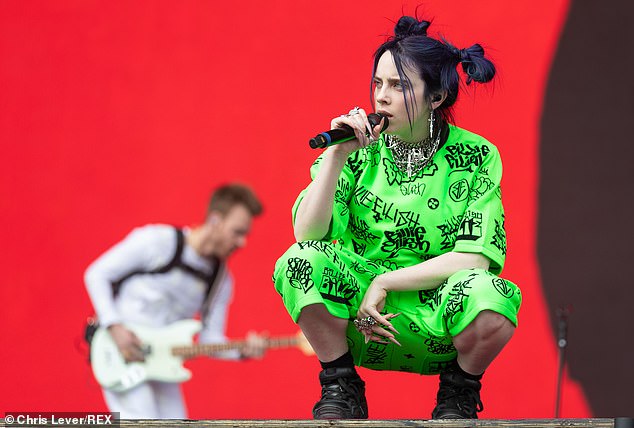 Billie Eilish favours the baggy sportswear and permanent scowl of a bored adolescent, but her gloomy lyrics and languid beats have won a legion of admirers

The Californian teenager is the singer most likely to make many Glastonbury-goers feel ancient (BBC4, 8pm). Eilish favours the baggy sportswear and permanent scowl of a bored adolescent, but her gloomy lyrics and languid beats have won a legion of admirers (28 million followers on Instagram). She will be joined on guitar and keyboards by her brother Finneas, 21, who co-wrote and produced her strange but sweet debut album in their childhood home.

Headlining Glastonbury for the first time since 1995 — and a fourth time overall — The Cure bring the curtain down on the Pyramid Stage (BBC2, 9pm). The band’s gothic image belies singer Robert Smith’s wonderful way with a pop hook, and recent shows have included the joyous In Between Days and Boys Don’t Cry. Famous for 180-minute sets, they are expected to play for a more digestible two hours. Whether Smith’s red lipstick, mascara and back-combed hair stand up to the anticipated heatwave remains to be seen.

Spectacular R&B star Janelle pays a return visit to the West Holts Stage she last graced eight years ago (BBC4, 10pm). The Kansas City singer put her pop career on hold after starring in the Oscar-winning film Moonlight, but went back to futuristic funk by collaborating with Prince shortly before his death in 2016.