issued a one-word verdict on the debate from Air Force One on Wednesday evening: ‘Boring!’ he said as he waited to take off from an Alaskan refueling stop.

The feeling was mutual. Until a discussion on Trump’s threat to use military action against Iran, candidates barely mentioned him.

They were the most biting remarks about Trump before the tweet from the president.

It wasn’t until the end of the first hour of debate that Trump came under serious attack, when his authority to use force against Tehran came under discussion.

Candidates such as Minnesota Senator Amy Klobuchar said he must get congressional authorization, as dictated by the War Powers Act.

President Trump issued a one word verdict on the Democratic debate from Air Force One on Wednesday evening: ‘Boring!’ he said as he waited to take off from an Alaskan refueling stop 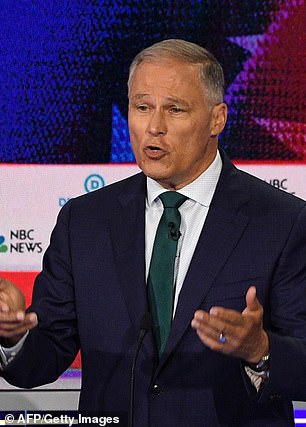 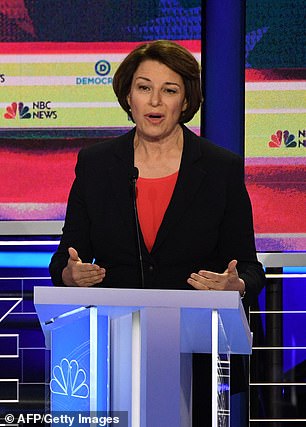 Hawaii Rep. Tulsi Gabbard dove in right after her, saying, ‘This president and his Chickenhawk cabinet have led us to the brink of war with Iran.’

She said Trump is creating a situation in which ‘just a spark would light off war’ with the adversary.

‘Trump needs to get back in the Iran nuclear deal and swallow his pride. Put the American people first,’ she implored him.

Trump came up from time to time as the ‘president’ but rarely by name at the debate at which it had been assumed he’d been assumed to be a major topic.

Yet, it wasn’t until closing remarks that Inslee gave the hardest-hitting attack on him. He claimed that Trump is a dire security threat, as his competitors named countries like Russia and China and existential challenges like climate change.

‘The biggest threat to the security of the United States is Donald Trump,’ he said.

Trump’s top advisers launched counter attacks centered around coordinated message that Democrats are out of touch with the needs and desires of the American people.

‘Now Democrats are for OPEN BORDERS! These debates are great, the American people can now see how far left the candidates are. If these policies were implemented millions of foreigners would flood our system and overwhelm public services. They are disconnected from reality!’ his campaign manager, Brad Parscale, said.

Soon the Trump campaign and the president turned their focus to another foil: the network hosting the face off that stretches across two nights to accommodate a historically large filed of major candidates.

The campaign attacked NBC for cutting to commercial unexpectedly, moments after switching to its second-hour moderators, because technicians had failed to switch off previous news anchors’ microphones.

Parscale was quick to shame the network on Twitter. The president followed suit.

Trump said NBC and its sister channel MSNBC ‘should be ashamed of themselves for having such a horrible technical breakdown in the middle of the debate. Truly unprofessional and only worthy of a FAKE NEWS Organization, which they are!’

Republican Sen. Lindsey Graham, a Trump surrogate, tweeted: ‘God bless the NBC technician who gave us a “break” from the Democratic debate. #AmericanHero’

It’s the second night’s debate that was expected to get to Trump. His top rivals are pitted against one another on Thursday evening.

Trump attempted to intensify the drama Wednesday, He went on the attack against  from Air Force One as Democrats prepared to take the stage on the first of two evenings of verbal jousting.

Biden wasn’t due to make an appearance on the debate stage until the next evening, but Trump encouraged his competitors to put their sights on him early. 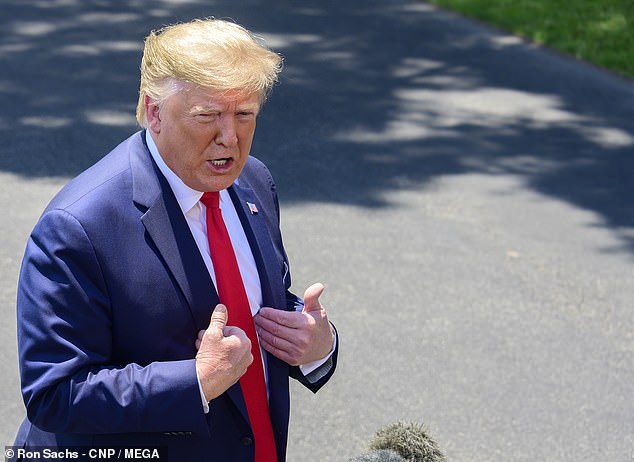 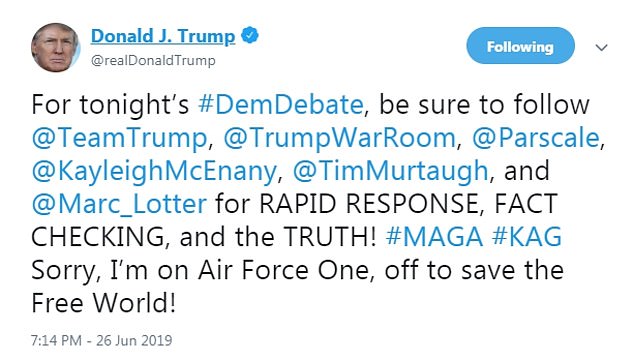 Trump first suggested he’d be sitting the event out, as he’s currently on a plane, making his way Osaka for the Group of 20 Summit

He hinted at a racial controversy that Biden had over the weekend, when he said he had good working relationship with segregationists.

Trump said a crime bill the former senator championed with the Clintons ‘inflicted great pain on many, but especially the African American Community’ and he should be held to account.

‘Ever since the passage of the Super Predator Crime Bill, pushed hard by @JoeBiden, together with Bill and Crooked Hillary Clinton, which inflicted great pain on many, but especially the African American Community, Democrats have tried and failed to pass Criminal Justice Reform,’ he tweeted.

Less than an hour prior, the president had suggested he’d be sitting the event out, as he was on a plane, making his way Osaka for the Group of 20 Summit.

‘Sorry, I’m on Air Force One, off to save the Free World!’ he said in a message that encouraged his 61.4 Million followers to get their information from Parscale and others. 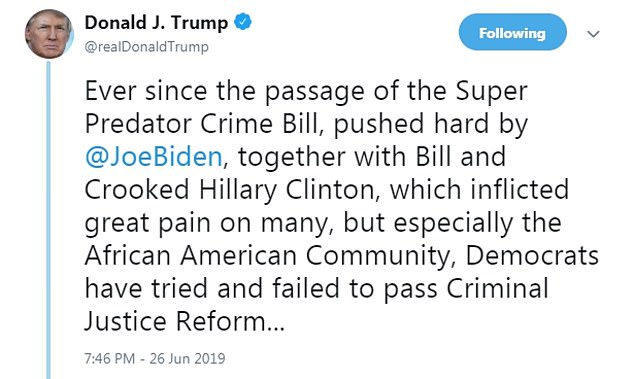 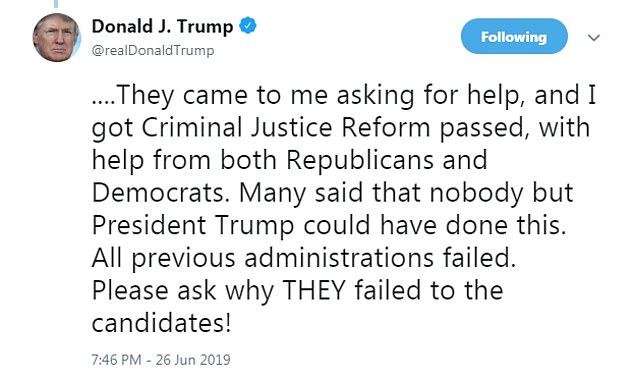 But he couldn’t stop himself from tweeting, at least one more time, about another Group of 20 – the 20 Democrats who met their party’s requirements to appear on the Miami debate stage.

Trump said of Democrats, ‘They came to me asking for help, and I got Criminal Justice Reform passed, with help from both Republicans and Democrats. Many said that nobody but President Trump could have done this. All previous administrations failed. Please ask why THEY failed to the candidates!’

The G20 is being held in Japan this year, which meant the president would be on a long-haul flight with little else to do while the first evening of the debate was taking place.

At a refueling stop in Alaska, the president said he had low expectations for his competitors’ performances.

‘I think they all are going to do very poorly,’ he said.

He told soldiers at the base seconds later, ‘And I had my choice between you and them and I chose you.’

Republican National Committee Ronna McDaniel told DailyMail.com before the debate that she expected Trump to live tweet the event, although she hadn’t asked him if he would.

‘Knowing our president, I would expect some live tweets,’ she said during a conversation that came as she ran from interview to interview at the opposing party’s first debate.

Democratic National Committee Chairman Tom Perez said he wasn’t worried about the president’s presumptive tweeting as he held court with reporters several hours prior to the televised sparring match.

‘Not at all,’ he told DailyMail.com in the spin room at the debate site. ‘We’re going to talk about the issues, there will be nobody talking about hand size at tonight’s debate. There will be nobody trying to figure out silly nicknames for their opponents. We’ll leave that to the Republicans.’

Jayme Closs' kidnapper's brother has criminal history of sexually assaulting a 15-year-old
Pressure on Buckingham Palace to intervene over Prince Philip's driving
Tiny T-Rex relative is dubbed the 'harbinger of doom'
More than 50 percent of all property sold in SF is being bought up by software tycoons
Blue Origin is 'going to the MOON': Jeff Bezos unveils giant concept lunar lander
Lose up to a STONE in three weeks: DR MICHAEL MOSLEY: My secret weapon in the war on diabetes
House of horrors survivor Michelle Knight reveals she still hasn't seen her son
Joe Biden and Bernie Sanders to meet at first one-on-one debate