A 40-year-old driver has been killed after his camper sped up a ferry terminal ramp, hurtled through the air over the water and slammed down on a departing ship’s deck.

Éric Belec from Laval, Quebec, was pulled from the wreckage of the decimated recreational vehicle and rushed to a hospital where he died hours later.

A female passenger, 40, who was in the RV with Belec was also pulled from the wreckage alive and remains in critical condition, Canadian officials confirmed.

Dramatic CCTV footage from Monday afternoon shows the extraordinary moment the vehicle soared over the edge of the ramp at the bottom of a steep hill, reportedly due to mechanical failures.

It came to a stop as only as it collided with the edge of the boat which was on its way across the Saguenay River from Tadoussac to Baie-Sainte-Catherine.

A witness on the scene confirmed to DailyMail.com that no passengers on the ferry were injured in the crash.

Belec was hailed as a hero for maneuvering the runaway vehicle to avoid injuring others on its doomed route down down the exceptionally steep Highway 138, which has been noted as a safety concern before, the reported. 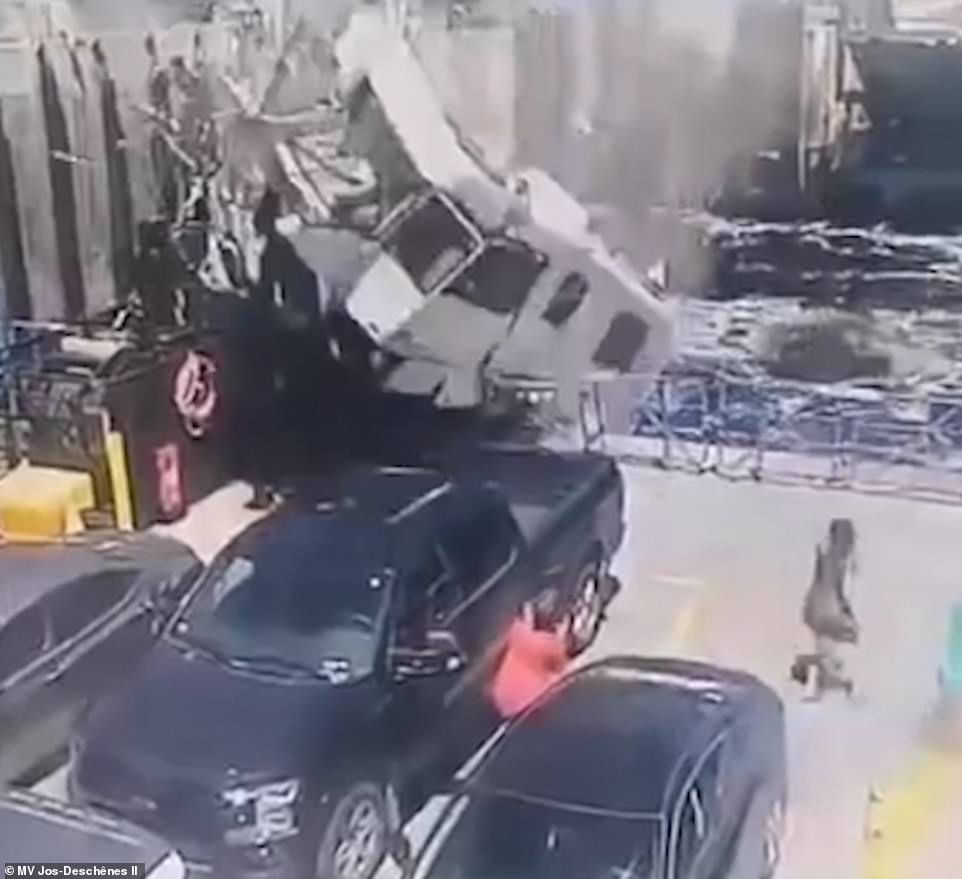 Éric Belec, 40, from Laval, Quebec, has died after the camper he was driving hurtled through the air and crashed into the parking deck on a ferry leaving port in Quebec. The moment of impact is shown

Video taken from the back of the ferry (called the ‘stern’) shows the ship pulling away from the terminal for its 10-minute journey across the river.

Several cars and a small crowd of people are seen gathered on the deck as the ferry motors through the water, roughly 30 feet from the loading ramp which the vehicles’ owners had just used to get their cars aboard the vessel.

Racing along the steep Highway 138, which is the road leading to the ferry dock, a white camper can be seen approaching the loading ramp and does not appear to be slowing down.

‘It seemed to be that the breaks had gone out on the motorhome and the man honked to warn people down the coast,’ Cindy Desbiens, who was on the upper deck of the ferry with her two children, told DailyMail.com.

The camper then suddenly shoots up the ramp and into the air above the river before plummeting down onto the edge of the ferry’s parking deck. 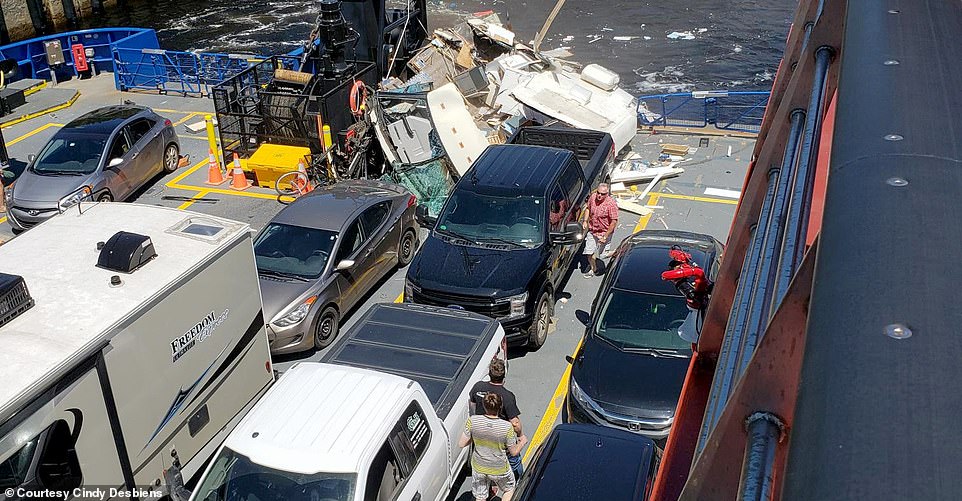 A witness confirmed to DailyMail.com that Belec had one female passenger, 40, in the camper with him, who was pulled out alive. Belec was pulled from the wreckage of the decimated camper and rushed to hospital where he died hours later. The wreckage in the aftermath of the crash is shown 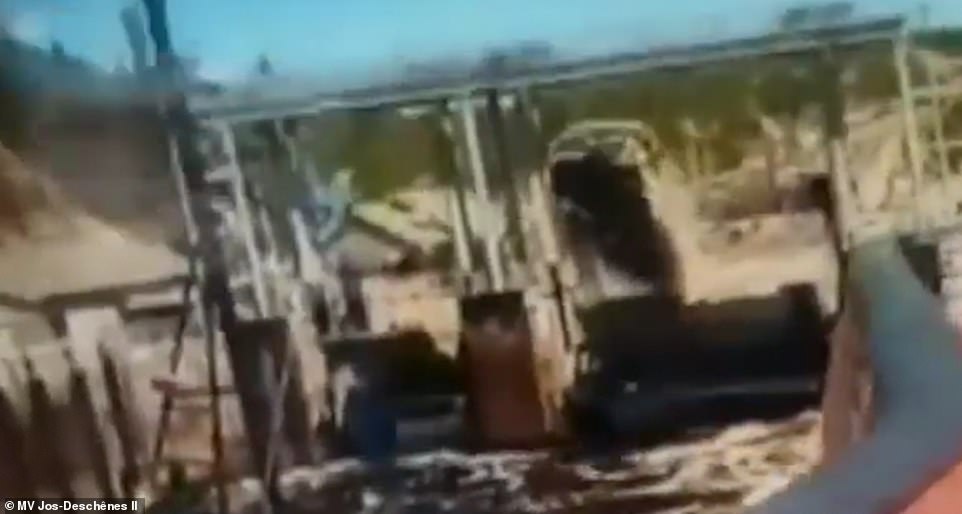 Dramatic CCTV footage from Monday afternoon shows the extraordinary moment the vehicle soared over the edge of the ramp, reportedly due to mechanical failures 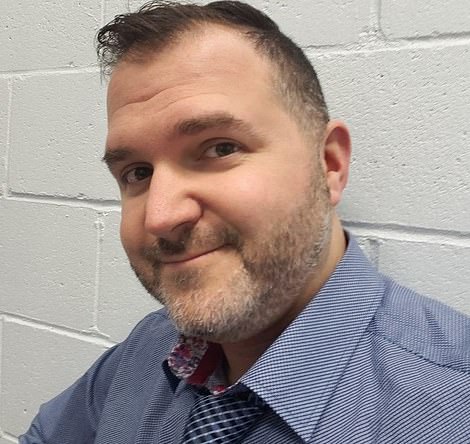 Éric Belec, 40 (pictured), from Laval, Quebec, was pulled from the wreckage of the decimated campervan and rushed to hospital where he died hours later

The ferry’s passenger’s ca be seen sprinting out of the way a split-second before the RV crash lands on the vessel and shatters into smithereens.

Desbiens told : ‘It was like being in a movie. It [seemed] impossible that something like this would happen.’

And witness Claire Gagné said: ‘There was a lot of panic. A lot of people almost got hit.’

The Sûreté du Québec have reportedly blamed a mechanical fault in Belec’s RV for the driver’s failure to brake.

Observers have praised Belec’s ‘heroic’ actions, which are believed to have prevented a much worse accident.

As the RV sped out of control, Belec honked his horn to alert bystanders and successfully maneuvered past oncoming cars.

Chloé Duplessis, another passenger on the deck, told a local radio station: ‘He was trying to stop by swerving into the metal gates on the side of the road.’ 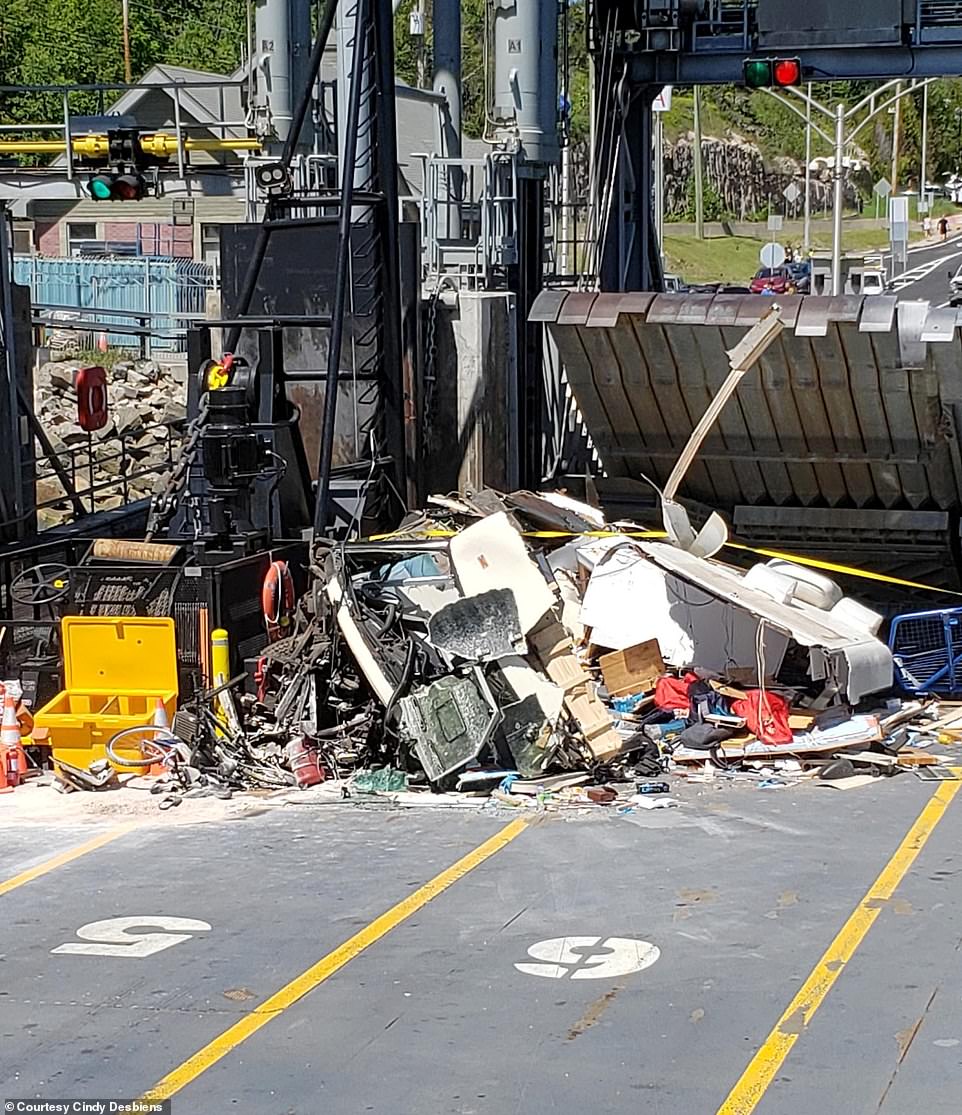 Tadoussac’s mayor, Charles Breton, expressed relief that no children were peering over the stern of the ship as they often do and that the ferry had already departed when the camper came sailing over the ramp. The wreckage is shown

Tadoussac’s mayor, Charles Breton, expressed relief that no children were peering over the stern of the ship as the camper crashed into the ferry, and his relief that the vessel had already departed from the pier.

‘If [the ferry] had taken off two seconds before, or two seconds later, the outcome could have been entirely different,’ Breton said.

‘All the elements are there for a catastrophic scenario.’

The road leading to the port is on a dramatic slope and locals have long called upon the local authorities to build a safer route.

In the wake of this week’s fatal crash, Mayor Breton vowed to improve Highway 138.

He said: ‘I think this accident reminds us this has to be a priority.’ 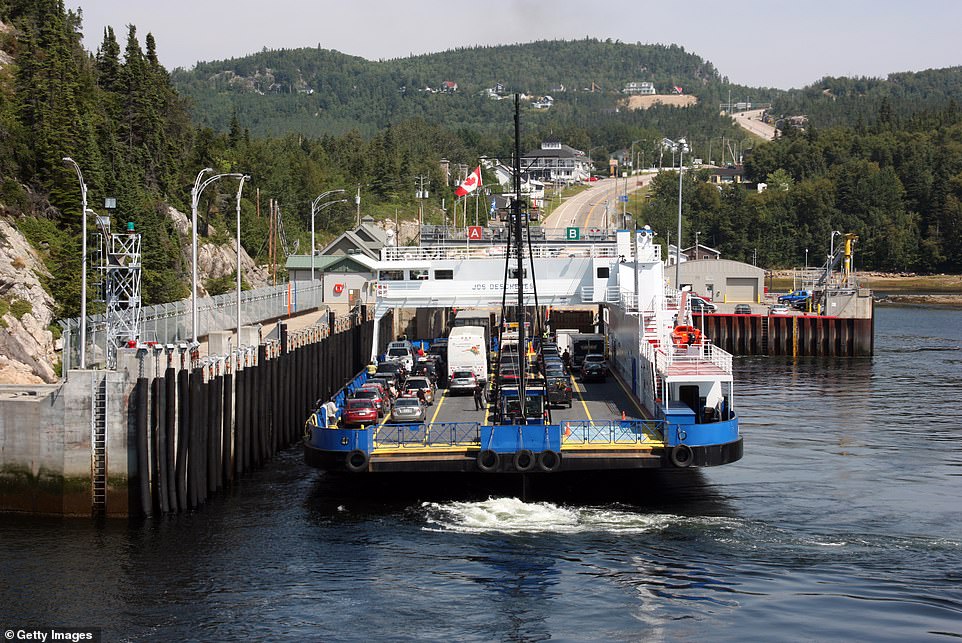 Susan Rice says she may run against Susan Collins for Maine Senator
'We're in the building.' Socialist star Alexandria Ocasio-Cortez boasts of Vanity Fair photoshoot
The internet reacts to Michael Avenatti getting arrested for extortion moments after a Nike scandal
Oklahoma man, 70, found driving with dead estranged wife, 74, strapped in passenger seat in Arizona
Ivanka and sister-in-law Lara share photos of themselves apple picking with their children
White House refusal to cooperate with impeachment sets off potential three-way clash
Mothers reveal toddlers have insulted customers and questioned their choices while in supermarkets
Levi Norwood, 17, is charged with shooting dead his mother and young brother