An irate and indignant Harvey Weinstein is heard bellowing at The New York Times reporters who revealed his years of alleged sexual misconduct in a recording of their phone call obtained by .

During the conversation, which was taped by The Weinstein Company’s former head of human resources, Weinstein is quick to try and get the names of the women who have made accusations about him to the Times.

He is also quick to lie too according to Gil’s version of events, with Weinstein refusing a request by the Times to record the interview while at the same time telling the reporters he is not taping their call.

Gil is currently suing Weinstein for breaching a contract that promised to pay him $450,000 if he revealed who inside the company was leaking information. 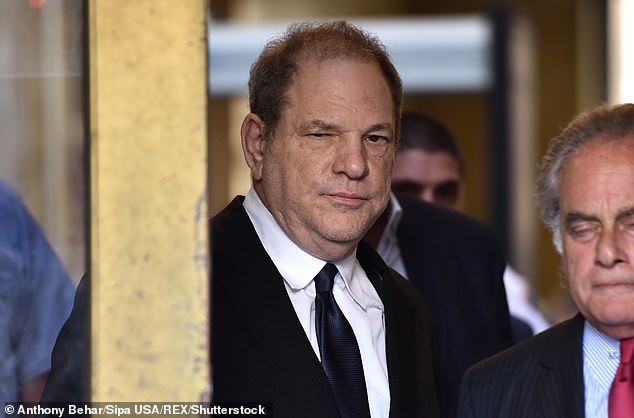 Bellowing blowhard: Inside Edition has obtained a recording of the phone call between Harvey Weinstein (above in July 2018) and New York Times reporters two days before his expose

When he is told at the start of the conversation that the there seems to be  ‘a pattern over three decades of allegations of sexual harassment of multiple women,’ he immediately requests to know the identities of these women.

‘I think you ought to be specific and tell me who they are and if they’re on the record,’ replies Weinstein.

When he is told that one of the women is Rose McGowan and asked about his settlement with the actress, Weinstein immediately shuts down and defers to his lawyer, Charles Harding.

He states at another point in the conversation:  “There are many mistakes you’ve made. I promise we will find them.”

Weinstein also explodes on reporters Jodi Kantor and Megan Twohey during one line of questioning, screaming: ‘No, excuse me, this is Harvey Weinstein talking!’

Towards the end of the 59-minute call, a frustrated but fiery Weinstein says to the women:  ‘It seems like you have a lot of hearsay on your hands.’

That sentiment is reiterated multiple times during the call.

He also tells the reporters: ‘There are many mistakes you’ve made. I promise we will find them.’

Weinstein does eventually admit: ‘I’m not a saint, but I’m not the sinner you think I am.’

More clips from this recording will be featured on Thursday night’s episode of Inside Edition. Check local listing for time.

Australian woman's rules for her husband including no female friends and social media ban
Nutritionist Susie Burrell reveals the ideal meal plan for office workers to banish cravings
Dramatic high speed police chase ends with car smashed into a tree
Restaurant customer wraps his porterhouse steak in a napkin and makes run for it without paying bill
Colorado television technician faces felony charges for hugging a customer too tightly
At least 20 people injured after a huge gas explosion at a LA Fitness gym in Florida
FBI and IRS agents RAID Detroit home of UAW president in corruption investigation into auto industry
THREE huge fires join to form megablaze burning through 600,000 hectares on the NSW-Victoria border