and Bill de Blasio said they would outlaw private health insurance in favor of a public option for all during Wednesday night’s Democratic primary debate.

They were the only two contenders on the stage of 10 candidates to raise their hands when NBC’s Lester Holt asked who would make such a move.

The question sparked off the first real debate of the night as the Democrats clashed on the best plan for the country.  All the candidates favor some type of universal health care option but the argument was over what do with private insurance. 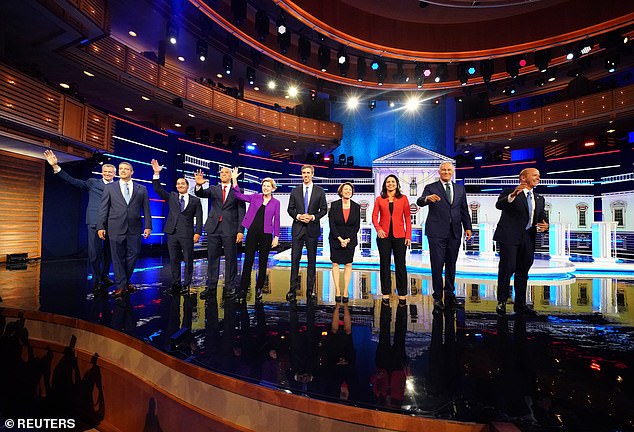 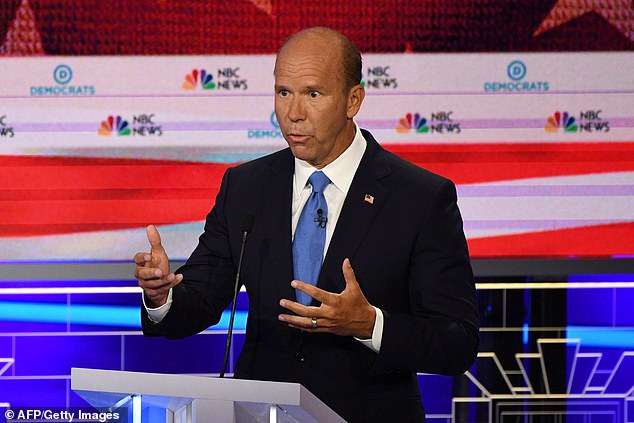 John Delaney asked why take something away from people

It got started when Beto O’Rourke was explaining why he would keep a private heath care one in addition to having a public option.

De Blasio interrupted his answer, resulting in a startled look on O’Rourke’s face.

‘Private insurance is not working for tens of millions of Americans. When you talk about the copays, the deductibles, the premiums, the out-of-pocket expenses, it’s not working!’ he barked.

John Delaney, a former congressman who’s campaigning full time without getting a lot of traction in the polls, jumped in.

‘Why do we have to stand for taking away something from people,’ he asked.

Jay Inslee used the topic to highlight his record on health care as the governor of Washington state.

‘It should not be an option in the United States of America for any insurance company to deny coverage for their right of choice. I am the only candidate here who has passed a law protecting a woman’s right of reproductive rights in health insurance and the only candidate who passed a public option. I respect everyone’s goals and plans here, but we have one candidate who advanced the ball. We have to have access for everyone,’ he said.

But Amy Klobuchar snapped back.

‘I want to say there is three women up here who fought pretty hard for a woman’s right to choose,’ she said to applause, referring to herself, Warren and Tulsi Gabbard – the three women on the debate stage.

‘I will start with that. I want to make very clear. We share the goal of universal health care and the idea I put out there, the public option which the governor was talking about, this idea is that you use medicare or medicaid without any insurance companies involved, you can do it either way,’ she said.

And Warren pulled out a line she uses often on the campaign trail: ‘I understand there are a lot of politicians who say it’s just not possible,’ she said. ‘What they’re really telling you is they just won’t fight for it. Health care is a basic human right, and I will fight for basic human rights.’ 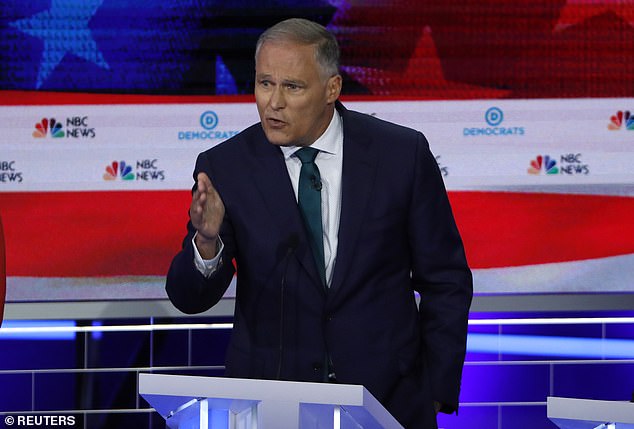 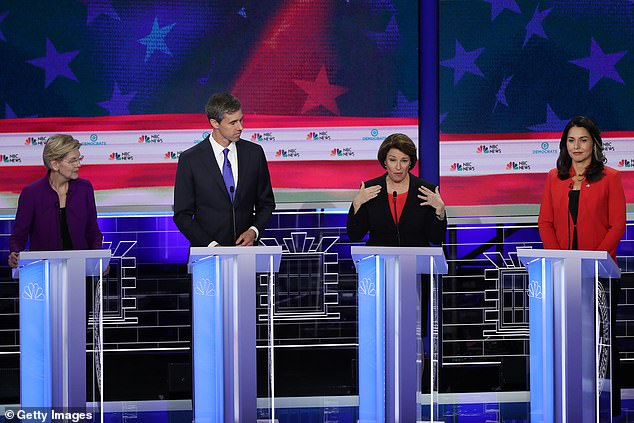 But Amy Klobuchar (second from right) used his answer to highlight her, Elizabeth Warren’s (left), and Tulsi Gabbard’s (right) record on women’s rights

Joe Biden is not on the debate stage but his campaign team offered the former vice president’s stance via Twitter.

‘Let’s be clear: We shouldn’t tear the Affordable Care Act down. We should build on it. The Biden Administration will give every American the right to choose a public option like Medicare to ensure everyone has access to the quality, affordable health care they deserve,’ the campaign wrote.

Polls show health care is one of the top concerns of the electorate and President Barack Obama’s Affordable Care Act remains a source of controversy among voters.

Klobuchar was the first to invoke Obama’s name when she explained why she would leave both a private and public option for health insurance.

‘I think it’s a bold approach. It’s something that Barack Obama wanted to do when we were working on the Affordable Care Act. I’m concerned about kicking half of America off of their health insurance in four years,’ she said.

The Minnesota senator also got in an attack on President Donald Trump, saying his executive orders that he claimed lowered prescription drug prices instead raised them. 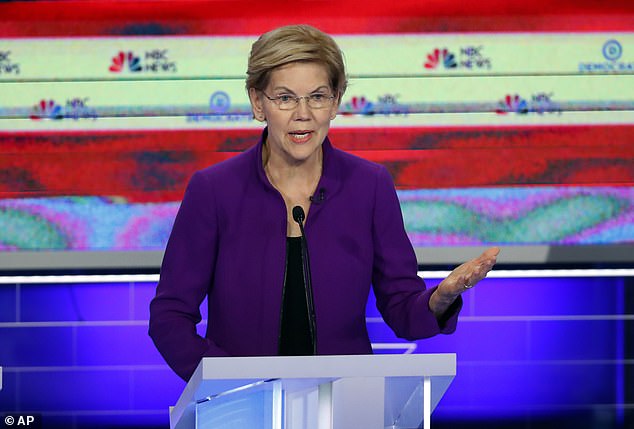 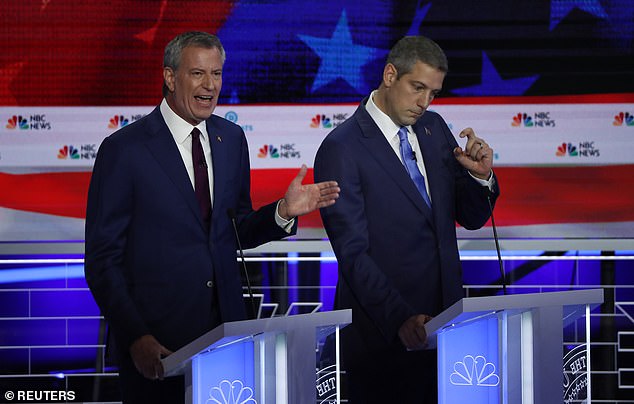 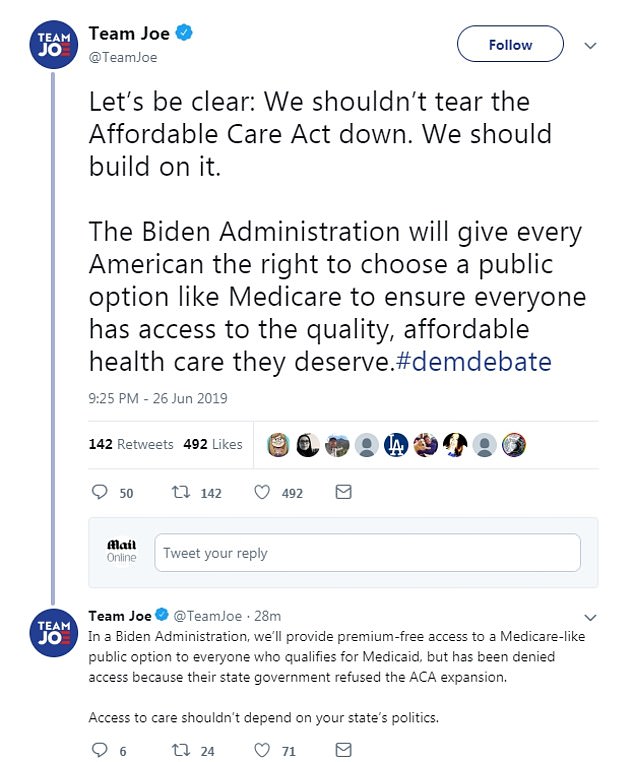 ‘We call that all foam and no beer,’ she said, invoking her folksy reputation.

Warren said she agreed with Bernie Sanders’ plan of Medicare for all, which is favored by the liberals in the Democratic electorate.

‘I’m with Bernie on Medicare for All. I will tell you why. I studied why families go broke. One of the number one reasons is the cost of health care and medical bills,’ she said.

‘Look at the business model of an insurance company. It’s to bring in as many dollars as they can with premiums and pay out as few as possible for your health care. That leaves families with rising premiums, rising copays and fighting with insurance companies to try get the health care that their doctors say they and their children need. Medicare for all solves the problem.’

President Donald Trump has been looking for ways to counter Democrats on health care – an issue they’ve owned since President Obama passed his Affordable Care Act in 2010 with the help of a Democratic Congress.

It’s an issue Trump sees as key in the 2020 election as Democrats argue they won the House in 2018 in large part thanks to the health care issue.