The National Rifle Association has pulled the plug on its NRA-TV production.

The move marks the end of an increasingly volatile business relationship with its long-time advertising firm Ackerman-McQueen, the reports.

Ackerman McQueen, which had been in charge of running the gun rights group’s live-broadcasting operations will no longer work on behalf of the NRA, ending a relationship that has lasted more than 30 years. 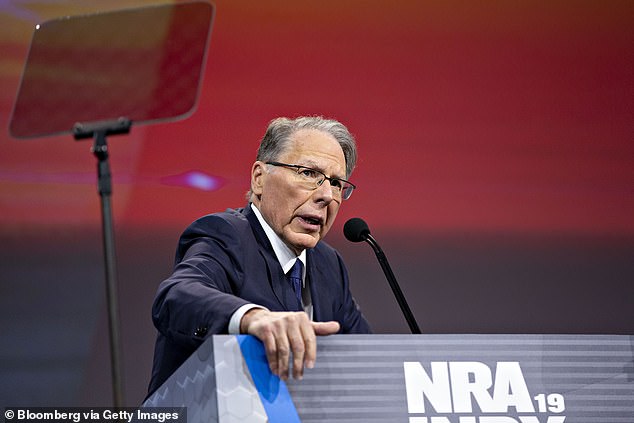 ‘Many members expressed concern about the messaging on NRATV becoming too far removed from our core mission: defending the Second Amendment,’ Wayne LaPierre, the N.R.A.’s longtime chief executive, said in a message Wednesday (pictured)

Despite this, NRA-TV could still broadcast re-runs of previous content but there will be no further live broadcasts.

It also has severed ties with its on-air talent, who were employees of Ackerman McQueen.

It is not yet know whether the N.R.A. will hire some of the on-air personalities in the future.

‘Many members expressed concern about the messaging on NRATV becoming too far removed from our core mission: defending the Second Amendment,’ Wayne LaPierre, the N.R.A.’s longtime chief executive, said in a message Wednesday.

‘So, after careful consideration, I am announcing that starting today, we are undergoing a significant change in our communications strategy. We are no longer airing ‘live TV’ programming.’

Ackerman McQueen told the NYTs it is ‘not surprised that the N.R.A. is unwilling to honor its agreement to end our contract and our long-standing relationship in an orderly and amicable manner.’

The acrimonious split comes amid tit-for-tat accusations following Ackerman McQueen accusing LaPierre of charging the ad agency $240K in travel expenses to Italy, Hungary, the Bahamas and other destinations in a letter written to the NRA’s board earlier this year.

The NRA retaliated by suing Ackerman McQueen for allegedly not sharing billing records with the NRA, as well as not disclosing the nature of the contract between the ad agency and the then-NRA president Oliver North, The Hill reported.