The step-daughters of an elderly couple found dead together at home are at war and must prove whose parent died first to grab a £300,000 inheritance in the first case of its kind in Britain for 70 years.

Anna Winter and Deborah Cutler have gone to the High Court to fight over the house and cash left by John Scarle, 79, and his wife Ann, 69, after they perished in Leigh-on-Sea in October 2016 days after their 26th wedding anniversary.

Mr and Mrs Scarle were found dead of hypothermia in their Essex bungalow after worried neighbours called in the police having not seen them for several days.

Their children from previous marriages have asked a judge to decide whose parent died first so they can secure the inheritance worth more than a quarter of a million pounds.

Ms Winter and Ms Cutler are using evidence from neighbours who saw their parents last, opened post found inside the house including cards for their 26th wedding anniversary in October 2016 and the condition of their bodies when discovered.

If Mr Scarle died first then his wife would have briefly inherited his share of the £300,000 inheritance – meaning Mrs Scarle’s child Deborah Cutler would be next in line.

The highly unusual case is the first of its kind in the UK since the 1950s – but were more common during the Second World War to settle inheritance disputes when families were all killed by the same bomb during the London Blitz.

Mr and Mrs Scarle – who each had children from previous marriages – both died from hypothermia.

How will the judge decide who died FIRST?

A law to help determine who died when couples or families perished at the same time was introduced in 1926 but legal rows date back to 1793 in Britain.

It is known as the ‘Commorientes Rule’ and has been used in the Second World War and other cases where couples or families died in the same incident, like a Blitz bombing for example.

The Commorientes Rule makes provision for where two or more people die in the same circumstance and their order of death cannot be ascertained.

If post-mortem examinations and evidence given to police cannot decide the question – then a judge will use the Rule, which always assumes the deaths occurred in order of seniority – ie the eldest person involved died first and the youngest last.

For example, if person A was aged 60 at death and person B was 59, then if they both died in an incident and it was impossible to say who died first, then the law would presume that person A died first.

This would mean that person B would inherit from person A’s Will and person B’s family will inherit the cash.

Like most married couples, the Scarles held their home as joint tenants.

Under joint tenancies, when one dies, their share automatically passes to the other.

In this case, whichever of the couple died first will have passed their share to the other, however briefly.

That would mean it would be the heirs of the longer surviving party who would stand to inherit.

In cases where it is not certain who died first, the Act in question sets up a ‘presumption’ that the older died first.

The claimant in this case says there is enough evidence that it was the younger – Mrs Scarle – who died first and so the family of the husband should inherit.

The family of whichever of the couple survived longest is set to inherit the £280,000 house lock, stock and barrel – with their step-siblings getting nothing, the High Court heard.

John Scarle’s daughter, Anna Winter, insists that her step-mother probably died first, which would mean her dad briefly inherited his wife’s share of the house when she died, and then passed it to his daughter when he succumbed.

But Deborah Cutler, daughter of Ann Scarle, claims the order of deaths cannot be determined and that the ‘legal presumption’ is that her step-father – the older of the couple – died first, meaning she and her brother, Andre Farley, should get the house.

‘The events which took place between 3-4 October and 11 October 2016 are unlikely ever to be known,’ Mrs Cutler’s barrister, James Weale, told Judge Phillip Kramer.

‘The most that one can do is speculate as to what might have happened.

‘None of the experts was able to express any view as to even the approximate date – let alone time – of the death of either of John or Ann.’

The court heard the couple began their relationship in 1983 and bought their Eastwood Road home in 1988 using the proceeds of sale of Mrs Scarle’s house in Westcliff Park Drive.

Despite being ten years older, Mr Scarle, who died at 79, was his wife’s full-time carer during the last decades of their life after she suffered a stroke around 1998.

Mrs Scarle, who was 69 when she died, required a mobility aid to walk around inside and a wheelchair when outdoors, whereas her husband had no problems getting around the house.

Mr Scarle was last seen on October 3 or 4, 2016, when he spoke to a neighbour, saying he was ‘getting the car ready for Ann’, suggesting both were still alive at that point, said Mr Weale.

They were found dead of hypothermia on the evening of October 11, with the property in disarray. It had been targeted by vandals or burglars, with windows broken and a door left ajar.

Mr Weale said it is likely that at least one of them was alive on October 7 – the date of their 26th wedding anniversary – because a card sent by Mrs Cutler was found opened.

But he said there was no evidence on which it could safely be concluded which of the tragic pair succumbed to hypothermia first.

‘There is no direct evidence from any witness which sheds any light on the date or time on which either John or Ann died,’ he said. 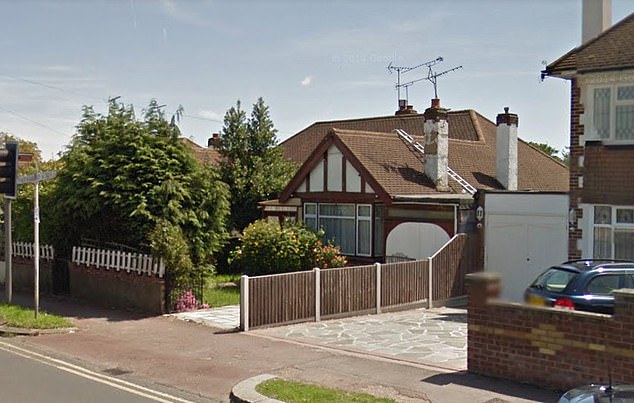 The battle for the elderly couple’s £300,000 inheritance centres on who died first in their Leigh-on-Sea bungalow (pictured) in October 2016

‘As a consequence, such a determination is an inherently speculative exercise which involves weighing uncertain circumstantial evidence against uncertain pathological evidence.’

For Mrs Winter, barrister Amrik Wahiwala said the evidence showed that, ‘on the balance of probabilities’, it was Mrs Scarle who died first.

The state of her body when police found the couple suggested that she had been dead longest, he said.

However, Mr Weale argued that even if it could be shown that Mrs Scarle ‘probably’ died first, that is not enough to enable Mr Scarle’s family to inherit.

The presumption that the oldest died first under the Law of Property Act 1925 is there to provide a solution in cases where it is ‘uncertain’ who survived longest, he said.

Mrs Winter would have to show it is ‘beyond reasonable doubt’ that Mrs Scarle died first in order to inherit, he said.

There would need to be ‘clear, reliable and compelling evidence’ to prove that and the medical evidence ‘does not come close to supporting such a conclusion’, Mr Weale added.

The judge has reserved his ruling on the dispute until a later date.

Former Pinnacle Airlines CEO shot dead in Memphis
Climate scientist says UN climate claims are nonsense, coral reefs are not in danger
Labour MP who was target of a neo-Nazi plot to kill her gets round of applause in the Commons
London Marathon embroiled in sexism row
Migrants take turns to peek through a hole in the side of a lorry
New York is the rudest city in the US followed by Los Angeles and Washington DC, survey finds
Ex-Hilton Hotel manager jailed for running 'extreme' bondage chemsex business
What is the REAL death rate for the coronavirus?