When 99-year-old John ‘Jack’ Jenkins MBE joined the Cunard Steamship Company in 1933 as a bellboy and lift operator on board the superliner RMS Mauretania – aged just 14 – life at sea was very different.

‘I remember one of my first trips, when we sailed to the West Indies,’ he said. ‘When we would arrive in port I would then have to walk around on deck with a gong, as we had no PA system back then, and bang the gong and say “all visitors ashore, all visitors ashore”.’

Mr Jenkins, who recently gave a moving speech at the D-Day commemoration ceremony in Portsmouth, recalled his voyages on the Mauretania while onboard Cunard’s iconic ocean liner Queen Mary 2 in Southampton during a celebratory lunch hosted by Captain Aseem Hashmi. 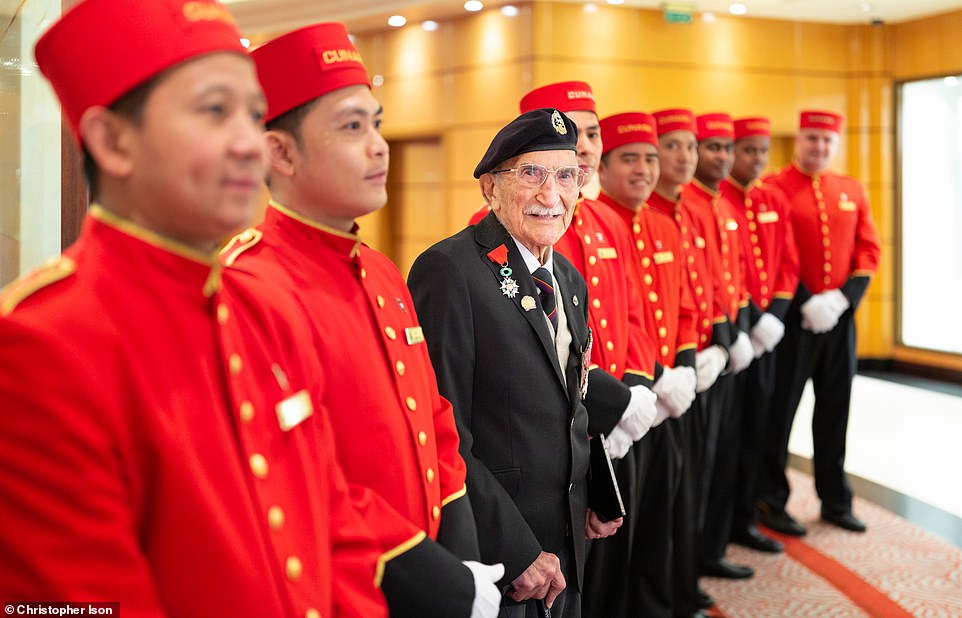 A trip down memory shipping lane: John ‘Jack’ Jenkins MBE joined the Cunard Steamship Company in 1933 as a bellboy on board the RMS Mauretania. Cunard welcomed him back to mark the start of its centenary celebrations. He had lunch on board the Queen Mary 2 in Southampton and inspected the bellboys (pictured) 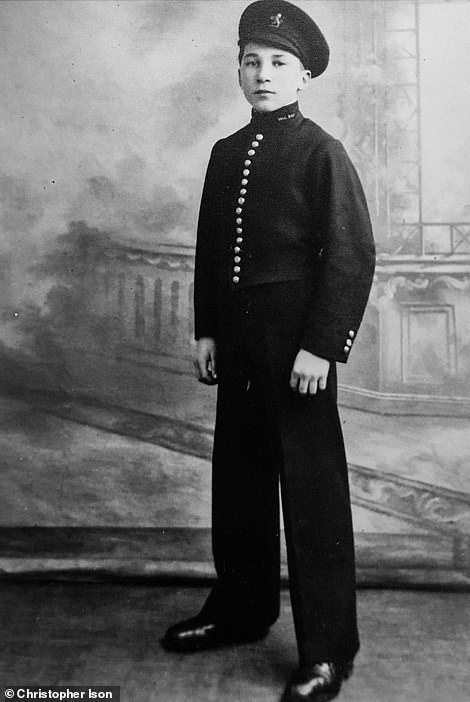 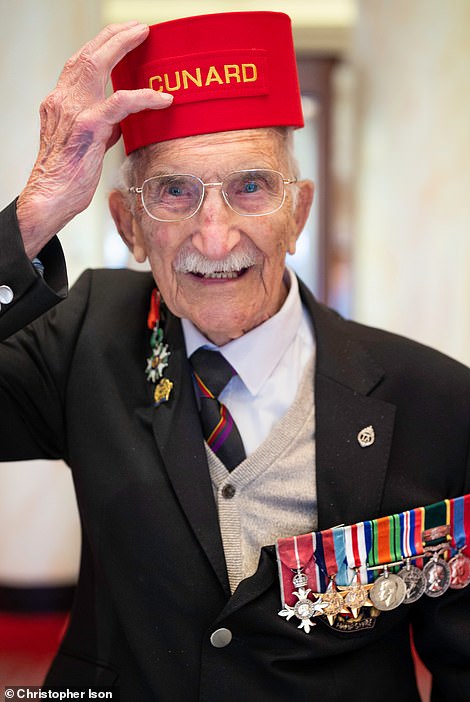 Mr Jenkins pictured in his Cunard uniform when he was 14 (left). He recently gave a moving speech at the D-Day commemoration ceremony in Portsmouth 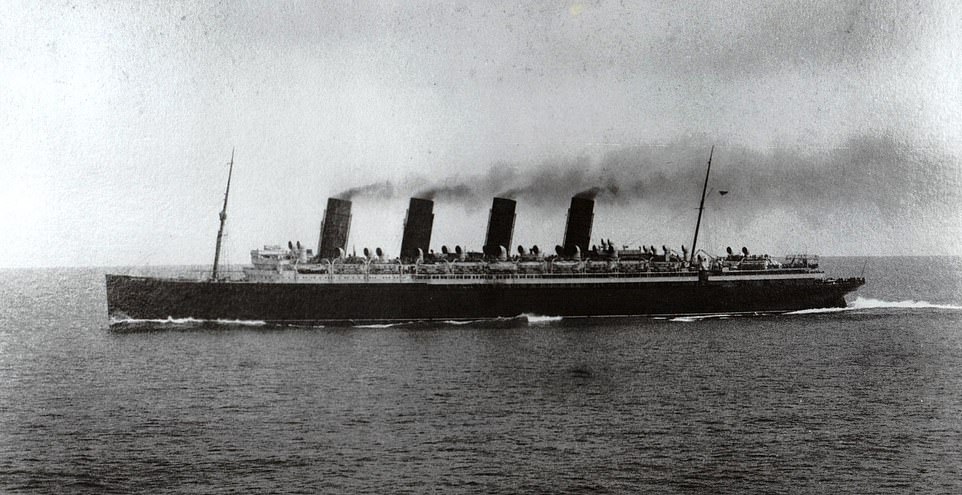 The veteran employee, whose tasks included opening the doors for the first class passengers in the dining saloon, was welcomed back to mark the start of Cunard’s centenary celebrations, which was truly fitting.

In November the cruise line will celebrate 100 years of sailing from the city of Southampton – the month Mr Jenkins turns 100. 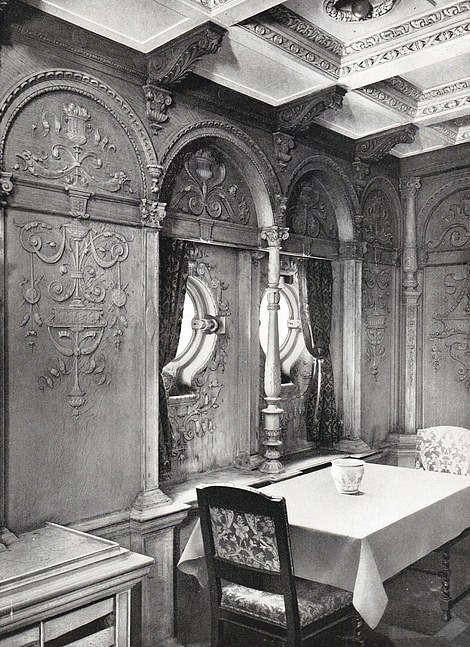 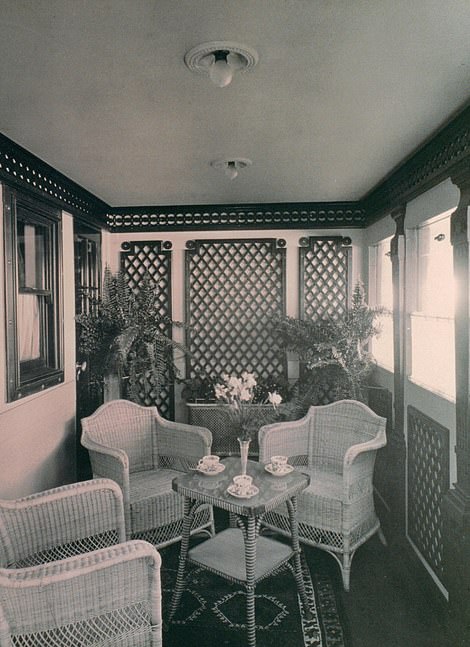 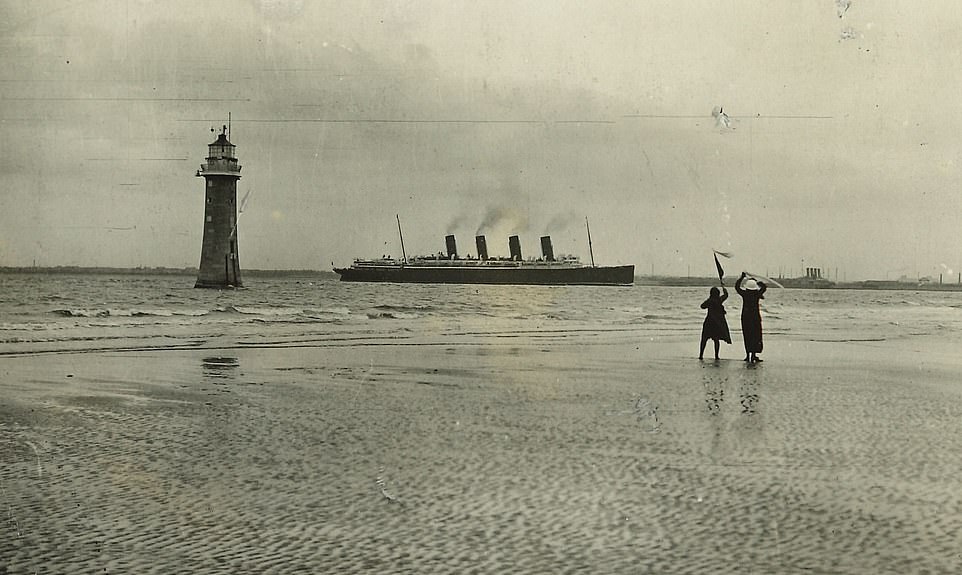 The Mauretania was launched by the Duchess of Roxburghe. It was a quadruple screw ship driven by direct-drive steam turbines. She’s pictured here in 1907 near Liverpool

In 1919 Mauretania was the fastest passenger liner in service and had held the prestigious Blue Riband for the fastest westbound and eastbound transatlantic crossings since 1909 – records it first broke on a return voyage to New York from Liverpool.

After Mauretania was retired in 1934, Mr Jenkins served on board the Cunard ship Ascania until the outbreak of World War II.

Joining the war effort, he fought at D-Day in 1945, before returning to the UK to take up a career in the merchant navy. 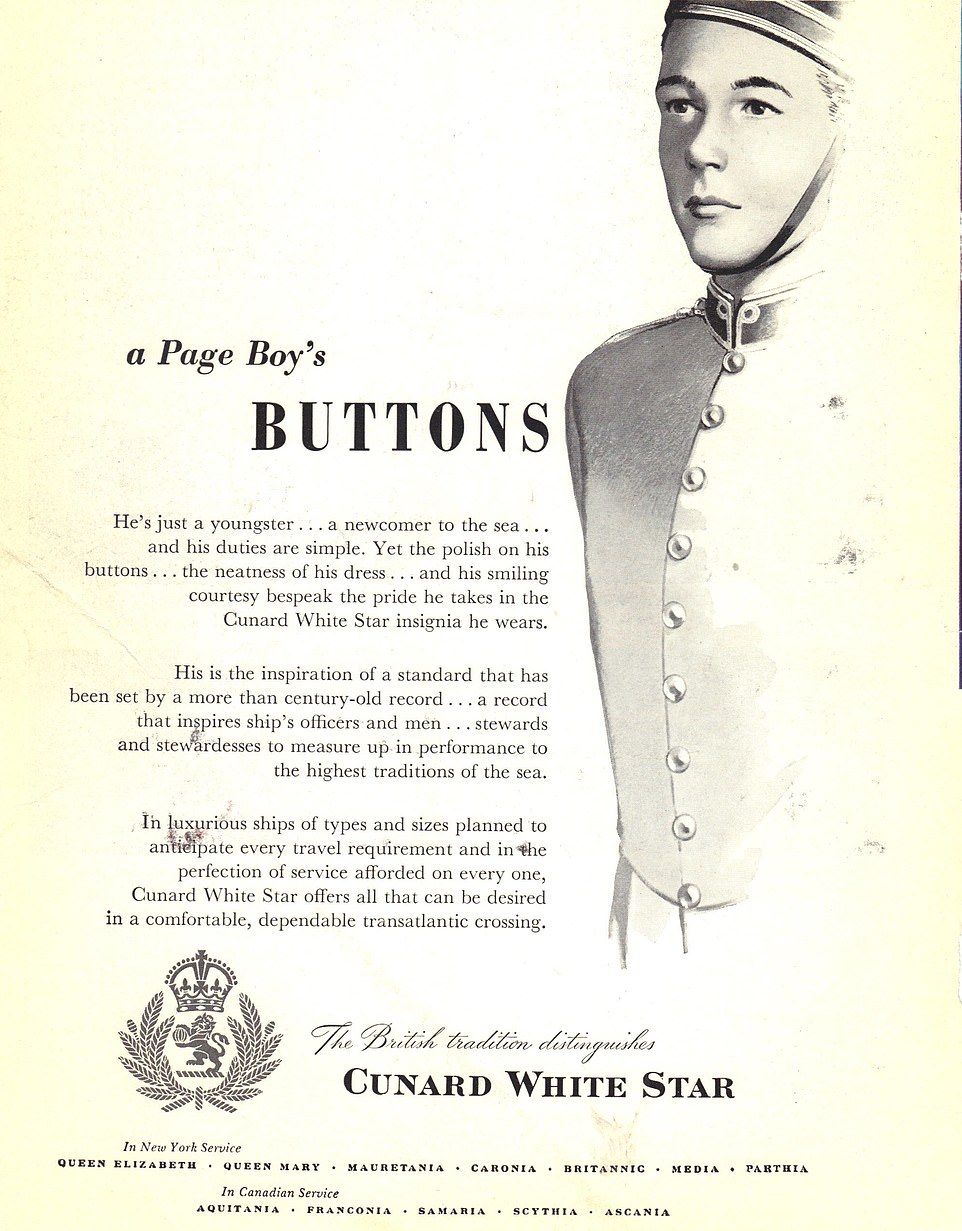 An advert for Cunard that appeared in the U.S. There has been a strong link between Cunard and New York for 100 years 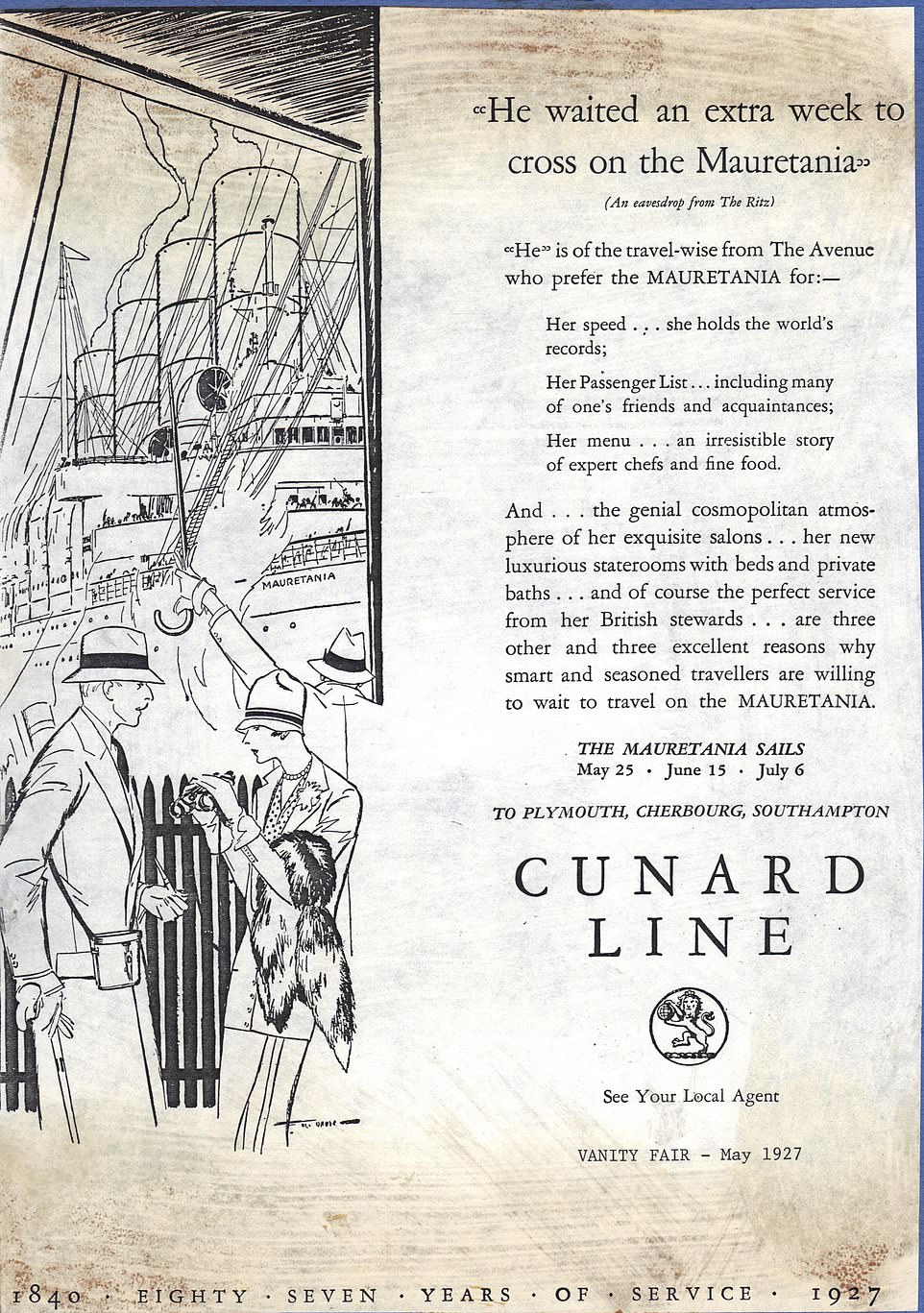 While on board the Queen Mary 2 the Captain invited Mr Jenkins to inspect the ship’s bellboys – to ensure they met the high standards of 1930s Cunard service.

They easily passed the inspection.

Captain Hashmi said: ‘It was such an honour to welcome back Mr Jenkins to the Cunard family. It felt like a very fitting way to start our centenary celebrations, here in Southampton, and of course to congratulate Mr Jenkins on such a special milestone birthday that he will celebrate later this year.

‘The members of the ship’s company and I thoroughly enjoyed listening to stories of what life was like on board, and we look forward to the opportunity to do so again.’ 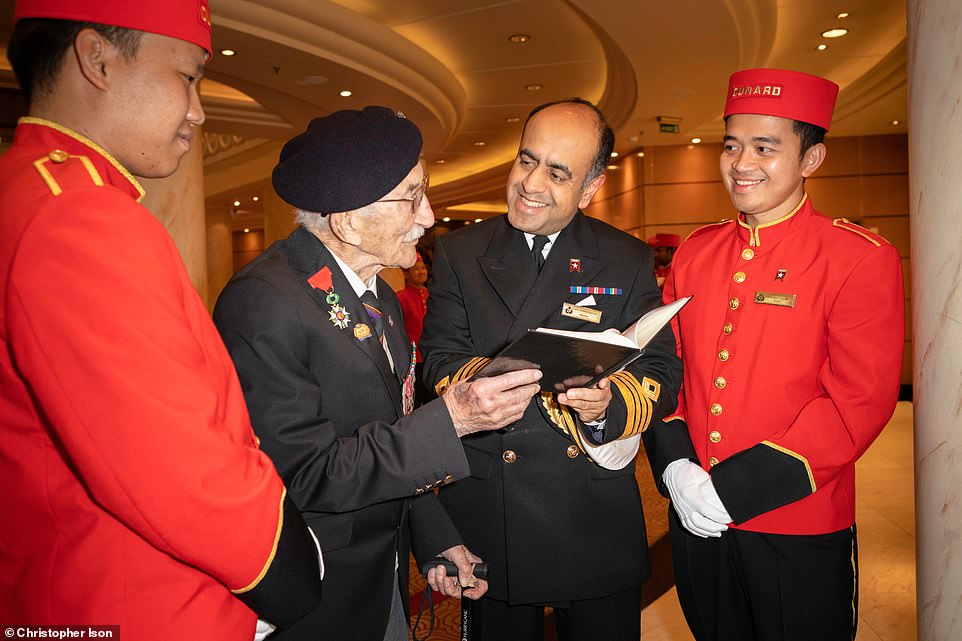 Captain Hashmi with Mr Jenkins on board the Queen Mary 2. Captain Hashmi said: ‘It was such an honour to welcome back Mr Jenkins to the Cunard family. It felt like a very fitting way to start our centenary celebrations’ 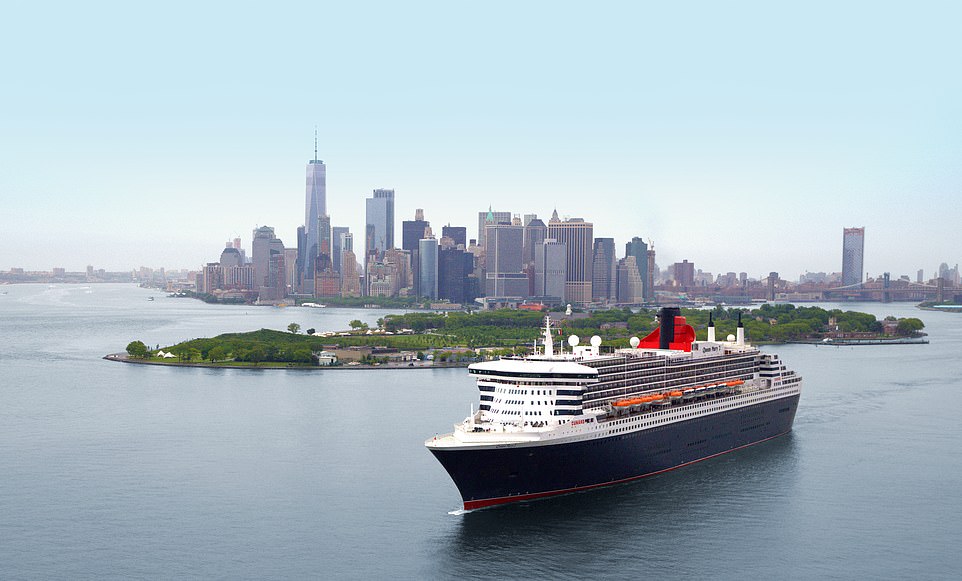 Departing November 19, 2019, Queen Mary 2 will undertake a historic transatlantic crossing from Southampton to New York – in tribute to the century-long relationship between the city and Cunard.

Guests on this will journey into the past thanks to a travelling maritime exhibition from Southampton’s Sea City Museum, as well as a series of enrichment lectures on board.

Maritime Historian and author Chris Frame will be joined by local history expert Penny Legg, each presenting a series of unique talks about the long and illustrious history of Cunard and Southampton.

THE ILLUSTRIOUS HISTORY OF ONE OF BRITAIN’S GREATEST OCEAN LINERS 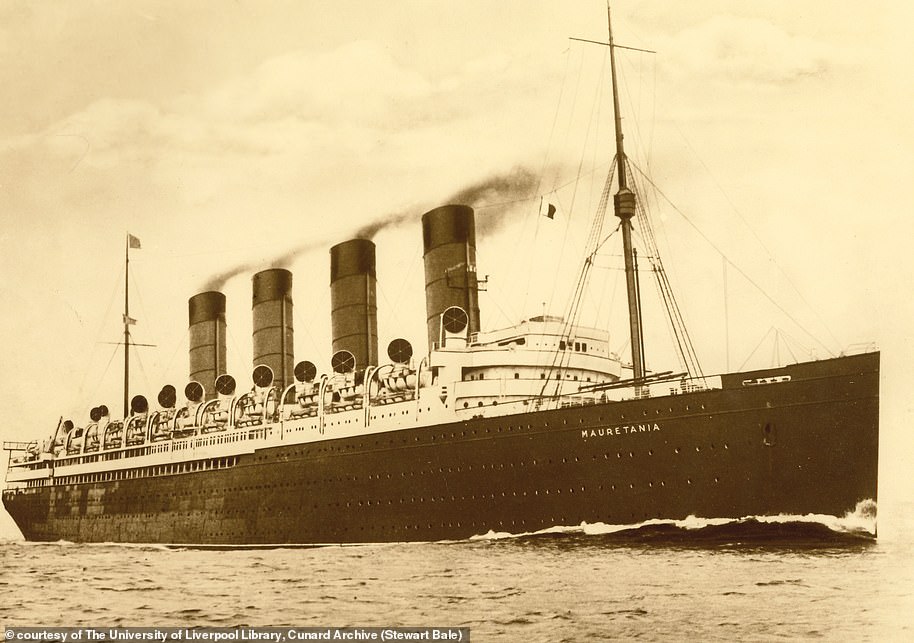 The Mauretania made its maiden voyage from Liverpool on 16 November, 1907. She’s pictured here in that year

She was built in response to the Nordeutscher ship Kaiser Wilhelm der Grosse taking the Blue Riband (an unofficial accolade given to the passenger liner that crosses the Atlantic Ocean in regular service in the shortest time) from Cunard’s Campania and Lucania in 1897.

By 1903 an agreement had been reached whereby the government would lend £2,600,000 to Cunard to build two ships capable of 24 to 25 knots. In addition, they agreed to make an annual payment to Cunard on the condition that the two ships were capable of being armed and that the government would have a claim on their services in times of national emergency. And indeed, the ship was used to ferry troops in World War I.

The Mauretania was launched by the Duchess of Roxburghe. It was a quadruple screw ship driven by direct-drive steam turbines. Although the propulsion machinery was identical to that of the Lusitania two modifications gave the Mauretania a slight edge over its sister. The diameter of the propeller blades was slightly larger and the turbines were fitted with more rows of blades.

The Mauretania made its maiden voyage from Liverpool on 16 November, 1907. Severe storms and heavy fog hampered the first voyage but the ship still arrived in New York in good time on 22 November. On 2 May 1908, the ship had left Liverpool when it was thought to have hit a submerged object. The propeller blades were damaged and Cunard took advantage of the situation and replaced both inner shafts with four bladed propellers. A refit was also carried out at Canada Graving Dock later that year.

The subsequent voyage left Liverpool on 23 January 1909. By April of that year, the Mauretania had captured both eastbound and westbound records and retained the Blue Riband for 20 years, until July 1929.

Stoney Westmoreland faces life in prison after federal charge for 'trying to have sex with minor'
AOC blasts Kellyanne Conway after Trump advisor criticized star Democrat over Sri Lanka silence
Julian Assange begins fight against computer hacking extradition to US
PICTURED: Mother of three who lost footing and fell 150 feet to her death at Lake Tahoe waterfall
Scooter Braun got $300M to buy Taylor Swift catalog from firm that once worked with Bin Laden family
Astuanta Niang left in stitches after Instagram app labels her Irish
Mick Mulvaney dismisses coronavirus as being hyped to 'bring down' Donald Trump
Meghan and Harry could attend Hollywood Bond premiere, a week after Kate and William attend London