Jeremy Hunt today demanded that Boris Johnson stop being a ‘coward’ – as the front runner dodged another TV debate in the wake of his bust-up with his girlfriend.

In an extraordinary full-frontal assault, Mr Hunt also taunted Mr Johnson that he was ‘going to lose’ the battle for the leadership.

The dramatic escalation came as Mr Johnson came under intense pressure to sign up for a Sky New head-to-head debate this week.

He has been accused of hiding in his bunker by avoiding the face-off, as well as shunning interviews and limiting questions from journalists.

At hustings over the weekend, Mr Johnson flatly refused to address the explosive row with his girlfriend at their south London flat. Neighbours called the police, who took no action, before handing the recording to the Guardian.

In a round of broadcast interviews today, Mr Hunt said: ‘On the question of debates, he is being a coward.

‘It is very disrespectful to say that you’re not going to appear in any head-to-head debates in the two weeks when (party members) can see you before they’ve actually voted.’

‘People need to know what you’re going to do and you need to answer those questions,’ 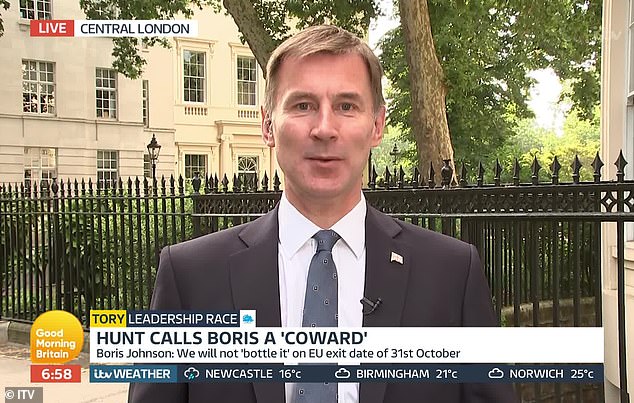 Mr Johnson remained tight-lipped at a hustings for party members in Birmingham over the weekend.

Asked about his rival’s silence, Mr Hunt told Sky News: ‘Someone who wants to be prime minister should answer questions on everything.’

Mr Hunt said today that his opponent was trying to ‘slink through the back door’ of No 10 and avoid public debate.

‘One of the strengths of our system is that we scrutinise our politicians with more intelligent ferocity than anywhere else in the world. But in this case it just isn’t happening,’ he said in an article for The Times.

‘Nothing could be worse for a new prime minister in these challenging times than to come to power with a fake contest. I am not interested in debating Boris’s private life. But I do want to quiz him on how he can ‘guarantee’ we will leave the EU on October 31 if Parliament votes to stop a No Deal Brexit, as it did in March.

‘I want to know what he really means by ‘reviewing’ HS2 or his ‘grave reservations’ about the third runway – surely he has had long enough to decide what he thinks?

‘Don’t be a coward Boris, man up and show the nation you can cope with the intense scrutiny the most difficult job in the country will involve.’ 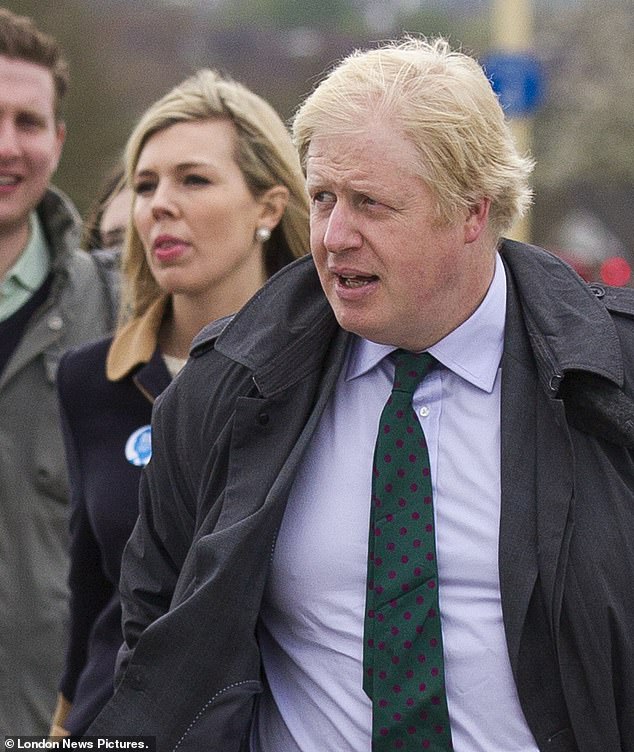 Mr Hunt said his opponent appeared cowardly, willing to ‘slink through the back door’ of No 10 and avoid public debate. ‘One of the strengths of our system is that we scrutinise our politicians with more intelligent ferocity than anywhere else in the world. But in this case it just isn’t happening,’ he told The Times. Pictured: Boris and Carrie together in 2012

Mr Fox told the BBC: ‘I think it is always easier to just give an explanation. It is inevitable there is a focus on private lives. That does not concern me. What I am concerned about are the issues.’

Tory grandee Sir Malcolm Rifkind said: ‘If you are a candidate to be prime minister and the police have been called to your house – fairly or unfairly – the fact is there was a police visit. You don’t just say ‘no comment’.

‘That implies you may have something you don’t want to disclose. It was a lack of judgment to refuse to even make a short comment. 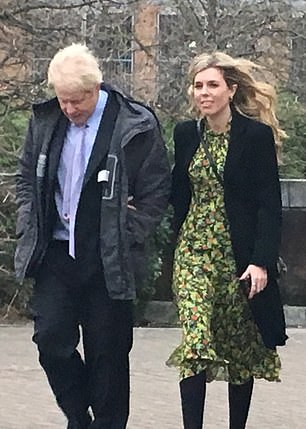 Tory grandee Sir Malcolm Rifkind said: ‘If you are a candidate to be prime minister and the police have been called to your house – fairly or unfairly – the fact is there was a police visit. You don’t just say ‘no comment’ (Pictured: Boris with Carrie)

‘All he could have said, quite reasonably, would have been that in all relationships there are occasionally outbursts of anger and disagreement.’

He rejected the idea that Mr Johnson should be allowed to draw a distinction between his private and public life.

But Chief Secretary to the Treasury Liz Truss, who is backing Mr Johnson, yesterday insisted the altercation was not of public interest. She said: ‘I believe it’s a private matter. I don’t think the public are concerned about that. I think Boris is somebody who for eight years as mayor of London did a brilliant job, he served as foreign secretary, people know what he’s like in office, and that’s what’s important.’

She warned against complacency as she suggested it was not certain that Mr Johnson would become the next Tory leader – and prime minister.

‘It’s always dangerous to be complacent and believe that things are inevitable,’ she said.

Miss Truss also said Mr Johnson would call the bluff of rebel Tory MPs threatening to bring down the Government if he pushed through a No Deal Brexit, adding: ‘My view is that Boris Johnson is somebody who is capable of commanding the support of the country and the support of the parliamentary party and I don’t believe my colleagues would vote no confidence and risk a Jeremy Corbyn government.

‘We need a leader with the determination to follow through, go through to the 31st October, leave preferably with a deal, but without a deal if necessary – and I do not believe in those circumstances those Conservative colleagues would seek to bring a Conservative government down and let in Jeremy Corbyn and his Marxist agenda.’

But Mr Fox warned that Mr Johnson’s claim that World Trade Organisation rules could be used to avoid tariffs under No Deal was false. He rejected the suggestion that the UK could secure a ten-year standstill in current arrangements if it left without a deal. He also said Mr Johnson’s argument that under No Deal the country could use a transition period to negotiate a free-trade agreement ‘doesn’t actually hold’.

‘If you don’t get the withdrawal agreement through Parliament, there is no implementation period during which we can do anything at all,’ Mr Fox told the BBC.