Hundreds of passengers have been hit with long delays at Manchester Airport due to an IT failure.

The glitch resulted in huge queues of people unable to check-in with airlines until the problem is fixed.

Airport bosses apologised for the chaos and promised to work quickly to find the cause of the IT failure.

Among them was former England football manager Sam Allardyce, who was spotted looking less than impressed in one the aiport’s terminal buildings. 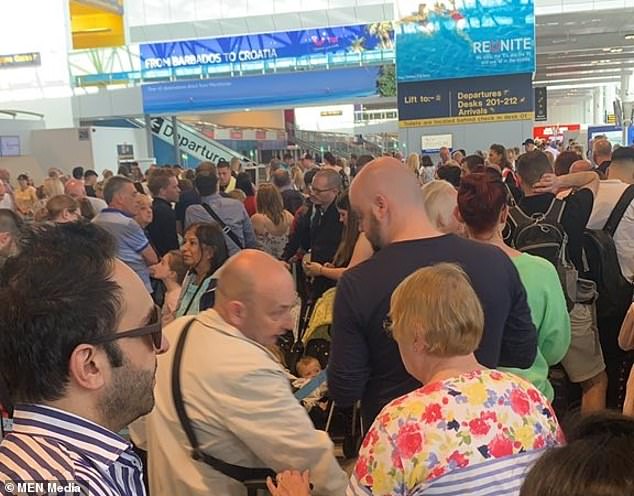 Hundreds of passengers are facing long delays at Manchester Airport due to an IT failure earlier today. Frustrated passengers posted photos online of the huge queues in the departures entrance

A Manchester Airport spokesman said: ‘We are investigating an IT issue that is currently affecting check-in and our teams are working hard to rectify the problem.

‘We apologise to passengers for any inconvenience caused and will provide an update as soon as possible.’

It is not yet clear how long the disruption is expected to go on for.

Passengers say they have been left in long queues with no refreshments.

One passenger, who asked not to be named, said: ‘Hundreds stuck in terminal one due to check in system failure. Lots of flights affected. 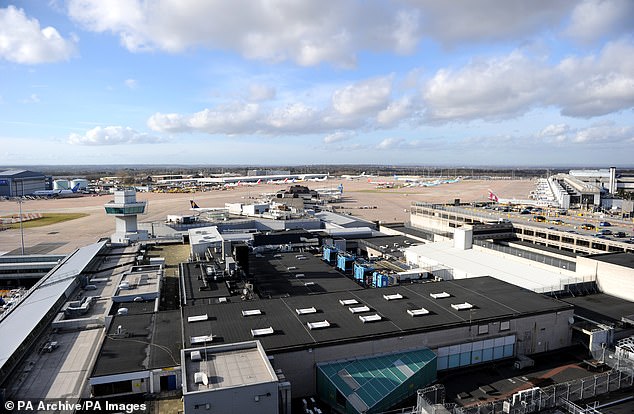 Another added: ‘We’ve been waiting to take off for over an hour now. It’s heaving and everyone is fuming.

‘There have been no refreshments handed out and no information.’

Other passengers took to social media to voice frustration.

Susan Oman wrote: ‘You can’t even see the end of the zigzagging queue to check in bags on Air Canada. Yes this is hours for only one airline.

‘And I thought I hated Manchester Airport security last week. I’ve that 1 hour kettling experience to look forward to.’

And Dave Murphy said on Twitter: ‘There have been so many problems at Manchester Airport that I haven’t even had time for an airport pint. Might as well go home, this holiday is ruined.’

'Laughing' boy, 15, stabs teacher to death and fatally stabs another pupil
Model who accuses Neymar of rape is seen for the first time as she describes 'attack'
Ex-Top Gear host Jeremy Clarkson brands Greta Thunberg a 'spoilt brat' and says she should 'shut up'
Foreign Office cat Palmerston 'is at death's door '
Nuts way to die: RSPCA find charred remains of a squirrel they think was struck by LIGHTNING
Wife shames cheating husband by spray painting message on mattress outside their home
Almost 500 people diagnosed with coronavirus in Australia contracted deadly infection on a cruise
Gay couple furious as Sainsbury's staff workers separate them while shopping