Former Vice President faced South Carolina voters for the first time since he spoke about working with virulent segregationist lawmakers while serving in the Senate for decades.

Biden took the stage immediately before Cory Booker at a South Carolina fish fry Friday night – and each called for party unity after engaging in the sharpest intra-party spat of the campaign.

‘Folks I’m here to tell you I hope to be your nominee,’ Biden told the crowd. ‘Whomever the Democratic nominee is, we have to stay together and elect a Democrat president of the United States of America.’

Biden also made sure to tout his link to former President . 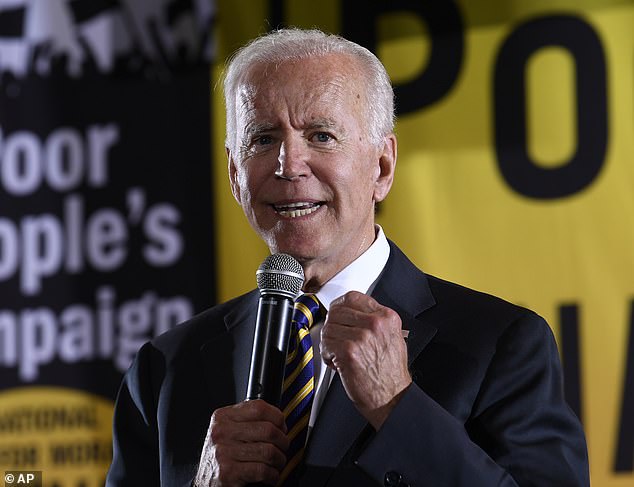 He called host Rep. James C. Clyburn ‘The highest ranking African American in the history of the United States of America – other than the guy I worked with for eight years.

Booker, who trashed Biden after his comments to a Manhattan fundraiser about working with Sen. James O. Eastland of Mississippi and Sen. Herman Talmadge of Georgia, also called for unity.

‘We all must make sure that we may be in the midst of a primary but when the primary is over we become a united force,’ urged Booker, a New Jersey Senator who was among the first to go after Biden for his comments. 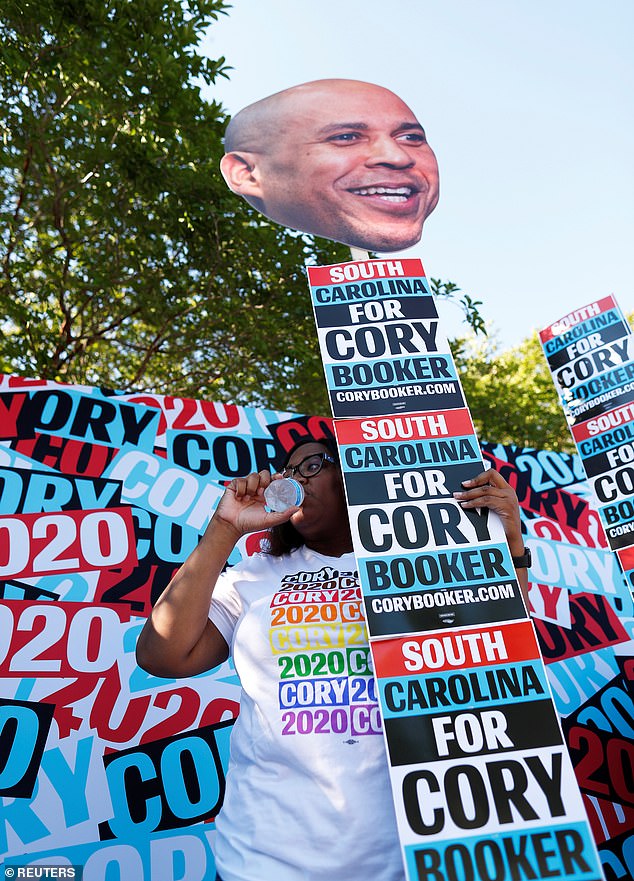 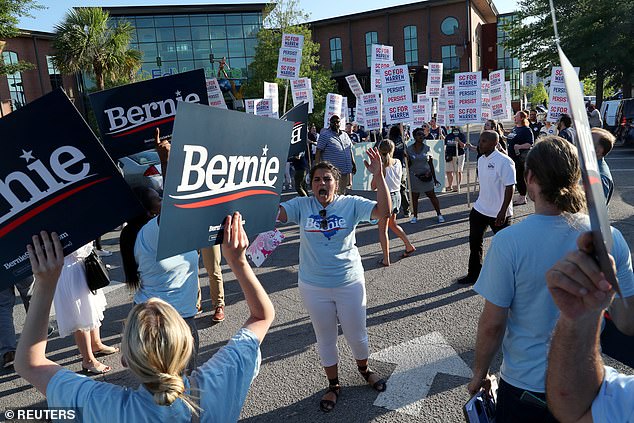 He said the mission was to ‘not just to beat one guy in one office but we become a united force to put the indivisible back in this one nation.’

But Booker elected not to use the event to go on the attack against Biden. Instead, he settled for a pair of fish jokes.

He told Clyburn: ‘From one dad to a guy who likes dad jokes. Let’s not flounder. Let’s go out there and kick some bass.’

The two men reportedly had a tense call after Booker bashed Biden’s comments and Biden said Booker is the one who should apologize. Booker wouldn’t say if the men spoke back stage Friday night.

With his comments about segregationists still swirling, Biden attended a major annual political event organized by Rep. James C. Clyburn, a member of the Democratic leadership and a longtime member of the Congressional Black Caucus.

With internal bickering within his front-running presidential campaign about his handling of the crisis, Biden shared the same stage as his rivals – including some who went after him for his comments.

Before he stood before Clyburn’s crowd, Biden spent two and a half hours meeting behind closed doors with African American leaders in the state.

The leaders said his comments on segregation weren’t discussed.

‘Going forward I don’t think you’ll hear him use those words. And this may be a learning experience,’ Kimpson said.

But Biden – who has plenty of past campaign experience in the state thanks to his previous presidential bids and time as Barack Obama’s running mate – was speaking to mostly friendly crowd of past supporters in that meeting. 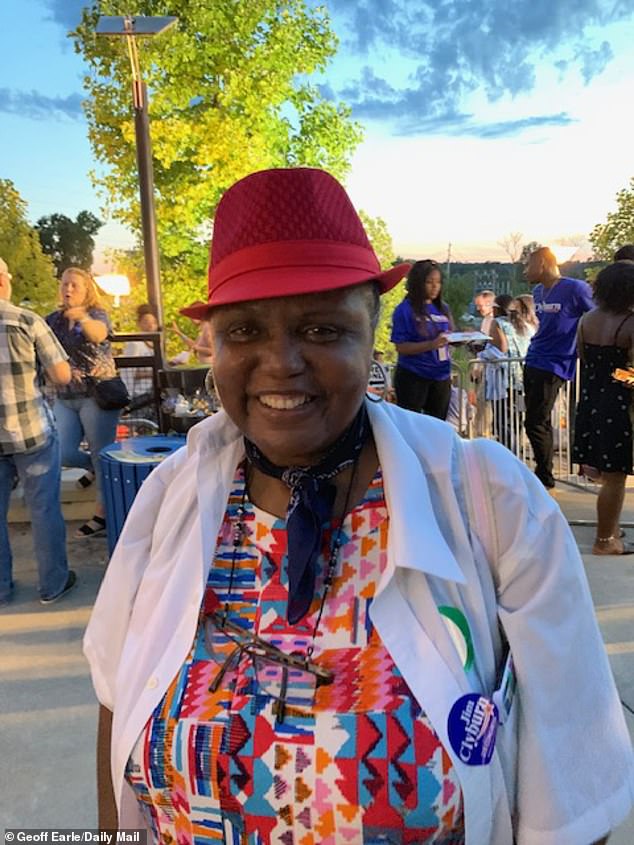 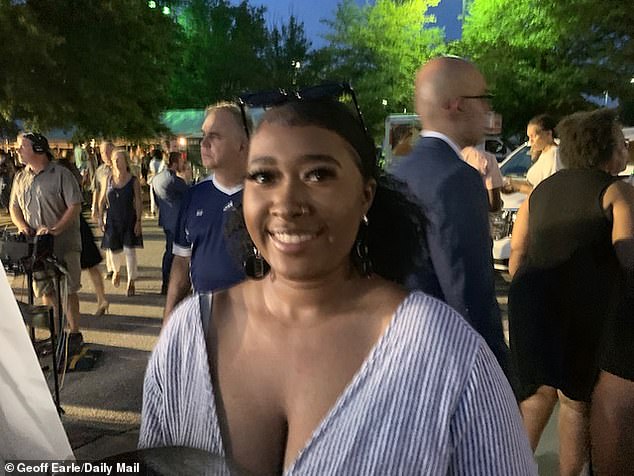 Erin Porter, a student from Orangeburg, was holding a Cory Booker fan to keep cool, but isn’t sure she is supporting him

‘I think everybody was pretty well committed to Biden. But you never know who’s spying and who’s not in campaigns. In campaigns, you just don’t know,’ said former state Representative Fletcher Smith.

Voters testing the waters to see who they might support for president were mostly keyed in to Biden’s comments.

‘It seems they’re nit-picking with all the small things,’ said Doretha White, 66, a retired turnpike worker and bank teller. She said she likes Biden because he served as President Obama’s ‘right hand,’ said white, who says she records DailyMail TV on her DVR.

Erin Porter, a student from Orangeburg, was holding a Cory Booker fan to keep cool, though she says she hadn’t settled on supporting him. She mentioned Biden’s having touched women who later said it made them feel uncomfortable.

‘I do not feel good about that,’ she said. ‘There’s a personal boundary.’

Two men charged with murder for dragging 18-year-old father with their car while robbing his iPhone
Kim, Khloe and Kourtney win $10m in legal war over failed Kardashian Beauty line
I'm not interested in Hillary's advice on running for president, says Bernie Sanders
The first-ever sport created by artificial intelligence thru combining rules of 400 other sports
Michigan man 'on a killing spree' shows deputies photos of two women he killed during a traffic stop
Fixer Upper's 'Little Shack on the Prairie' hits the market for $400,000
Parents of tech CEO found dead inside her rental car say their daughter suffered a 'manic episode'
FIRST Trump Ukraine call has no mention of Biden or aid