Viewers were left singing the praises of hunky Christopher Abbott this evening after he stripped naked in the TV adaptation of Catch 22 – but dozens were left frustrated as they struggled to hear what was going on.

The first episode of the series aired this evening at 9pm on Channel 4, and viewers were quick to admire the actor, who plays Captain John Yossarian.

Though many blasted the sound quality – and were baffled when they were bombarded with adverts after 20 minutes despite being told there wouldn’t be any commercial breaks.

The series, which was directed by, produced and stars as Lieutenant Scheisskopf, is based on the classic satirical novel Catch-22 by Joseph Heller.

After tonight’s episode viewers couldn’t help but praise Abbott for his outstanding physique, with one writing: ‘Watching Catch-22 on Channel 4… Yossarian is very easy on the eye, as is Pico Alexander.’ 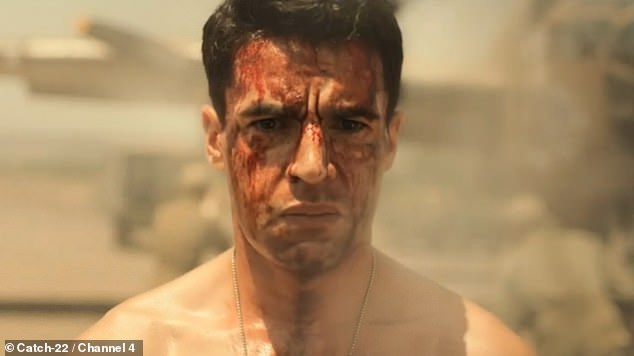 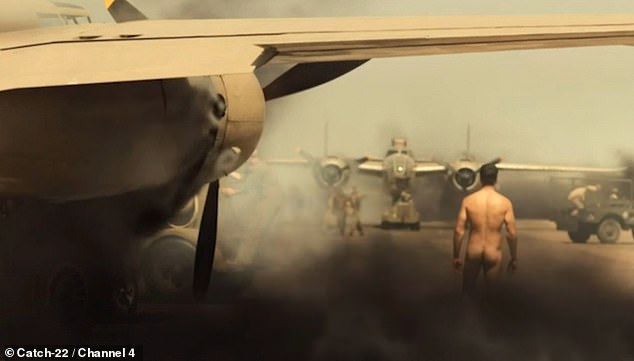 Others agreed, with one commenting: ‘Only eight min in, #Catch22 has had more sex than nearly two weeks of #LoveIsland.’

A third wrote: ‘Some nice looking blokes in the US Air Force telly version. Plus, planes and bombs etc,’ while another joked: ‘It’s like an Abercrombie and Fitch advert.’

The series follows the life of Yossarian, a US Army Air Forces bombardier who based on the island of Pianosa in the Mediterranean Sea.

Departing slightly from the novel, the show is told from the point of view of main character, Yossarian, who is played by Abbott. 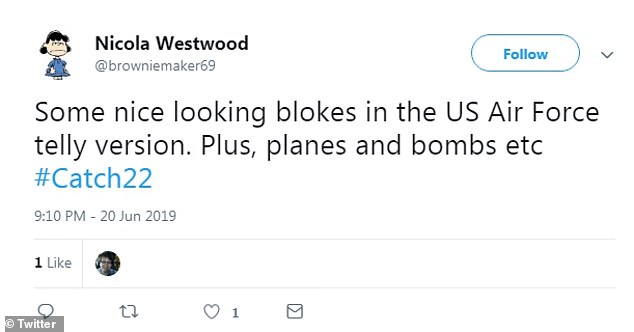 The programme begins as Yossarian and his friends are training to become flyers in California, before being shipped to an Army Air Force base on the Italian island of Pianosa.

The programme features a realistic portrayal of the male-dominated US Air Force in World War Two.

Within the first few minutes of the series, Yossarian walks completely naked through an air force base as fires burn around with activity.

And it’s not the only time the hunky Girls actor strips off – later viewers admired the comrades as they splashed about in the water enjoying a beer. 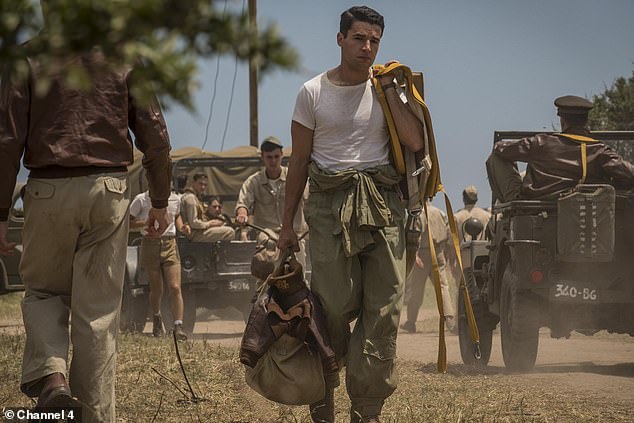 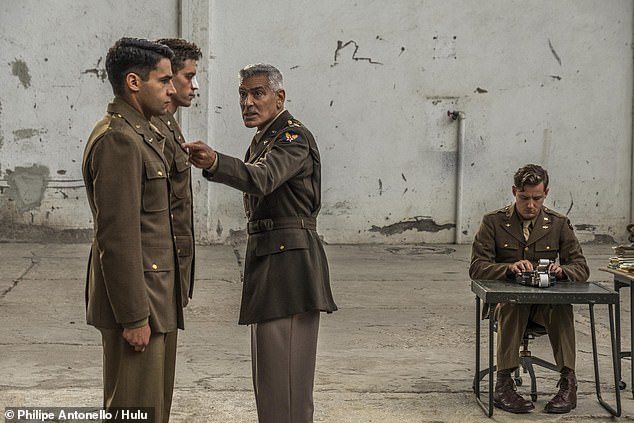 George Clooney, who produced the series, also stars alongside Christopher Abbott in the Television adaptation

But many viewers felt the show was spoilt by its sound quality, and criticised Channel 4.

One tweeted: ‘Got the volume at 75, still can’t bloody hear it properly.’

Another asked: ‘Is it just my telly or is #Catch22 really quiet? I’m enjoying it but had to turn the volume right up. Then battle scenes are too loud.’

And one moaned: ‘@Channel4 The audio on #Catch22 is really awful. Can barely hear people talking even with the TV turned up. Even the music is quiet. It’s really off-putting.’ 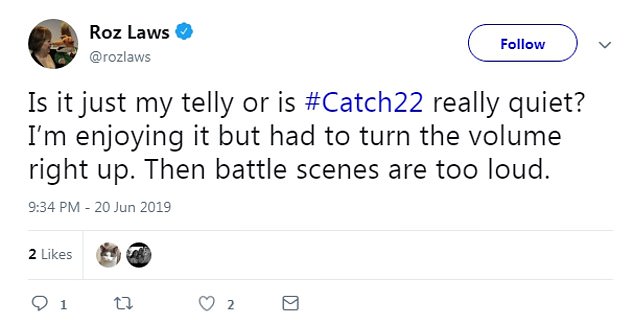 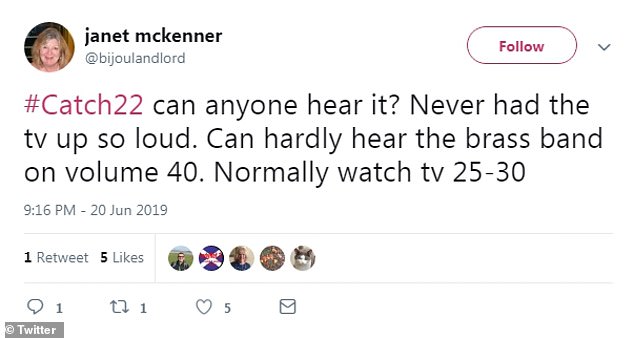 But many viewers felt the show was spoilt by its sound quality, and criticised Channel 4

Dozens also moaned about the number of ad breaks, with one tweeting: ‘The voice over on CH4 said ad free.

‘There have been never ending ads. Why say it? Why?’

‘Thought it said no ads??’ asked another, while one wrote: ‘What’s with these ads then? Thought there weren’t meant to be any…’. 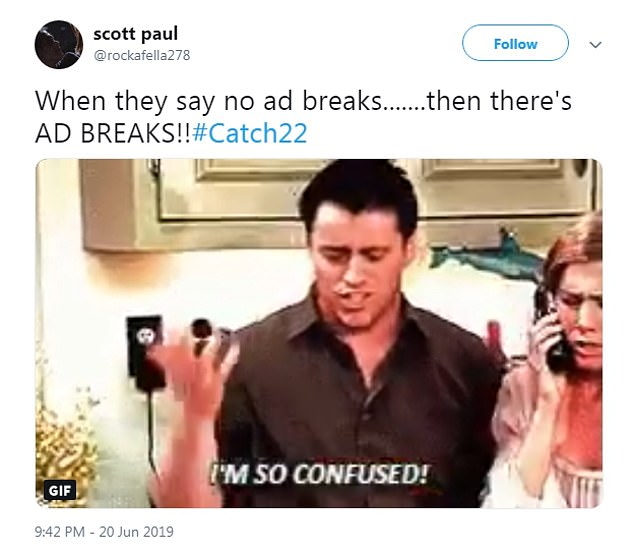 Many were frustrated by the number of adverts, despite having been informed there wouldn’t be any

Clooney plays the parade-obsessed Lieutenants at the base, Scheisskopf, the series also stars Kyle Chandler as Colonel Cathcart, and Hugh Laurie as Major de Coverley.

George previously suggested the series was primarily about a ‘bunch of guys’, and had said he only joined the project because the script reworked the original story’s ‘sexist portrayal of women.’ 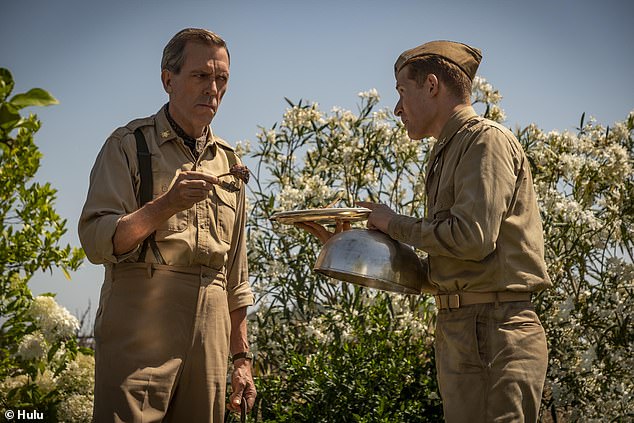 Hugh Laurie is amongst the famous faces starring in the new Channel 4 drama, which was directed and produced by George Clooney 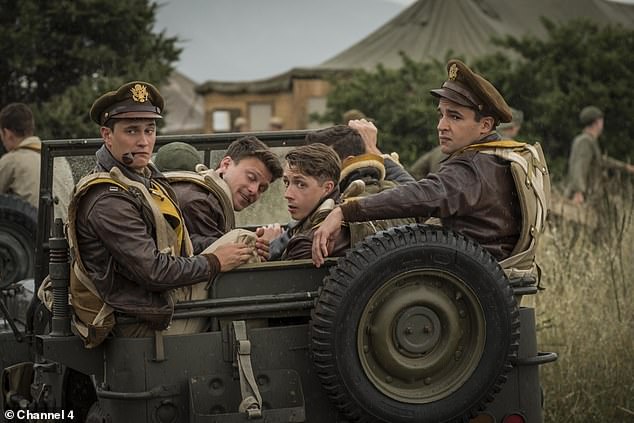 The series is told from the perspective of Yoassarian (played by Christopher Abbott, right),  and also stars McWatt (Jon Rudnitsky) and Kid Sampson (Gerran Howell)

He told Variety: ‘We tried to be part of the solution as opposed to being part of the problem,’ describing the portrayal of women, ‘terrible.’

Earlier this year, Clooney admitted that it was Abbott’s role as Charlie Dattolo in the HBO hit Girls that helped him score the part.

That’s how [Christopher Abbott] got the part was because I watch Girls sort of religiously,’ Clooney revealed in an interview with Vanity Fair magazine. 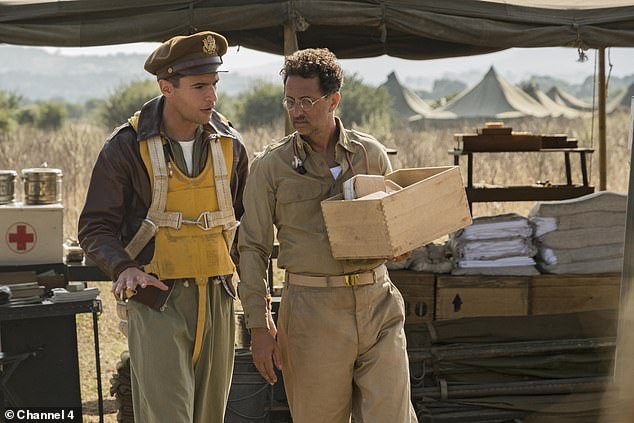 Abbott’s acting in the first episode of the series was praised by viewers on Twitter, with many calling him easy on the eye as well