Rail, Maritime and Transport (RMT) union members walked out just after midnight this morning, saying they had been left with ‘no choice’ other than industrial action.

It means disruption for commuters this evening heading home from London Waterloo to areas including Hampshire, Berkshire, Surrey and Devon. There has been no SWR services running from Bristol Temple Meads today.

Furious commuters called for striking staff to be sacked as they took to Twitter to share their rage at the action which saw thousands late for work this morning. 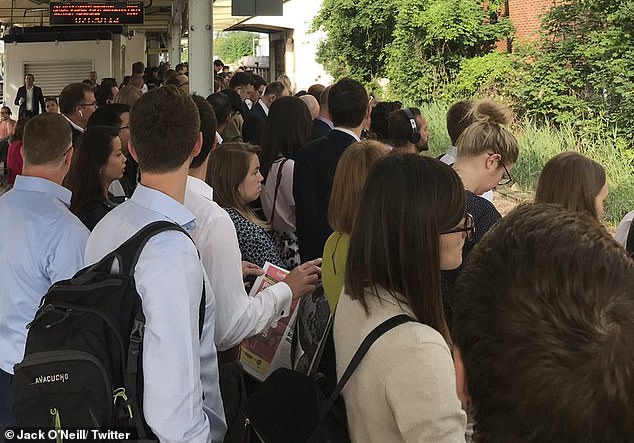 One commuter shared this picture on social media, branding it ‘absolute mayhem’ as he headed into London Waterloo 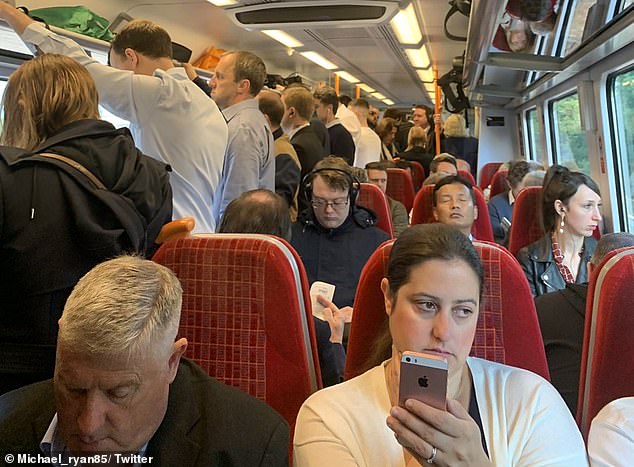 And tomorrow rail passengers face a second day of travel disruption because of the continuing strike by workers in a bitter dispute over guards on trains.

Members of the Rail, Maritime and Transport union on South Western Railway have launched a five-day walkout, causing misery for tens of thousands of travellers, including commuters into London Waterloo station.

Buses will again replace trains on some routes, with up to half of SWR’s services affected by the industrial action.

There were chaotic scenes at stations on Tuesday, including Surbiton in south-west London, where passengers formed a huge queue just to get into the station.

Some passengers at Surbiton said they were told to return hours later on Tuesday because so many people were trying to get into the station.

Passengers between Egham and Staines faced further delays because of a swan on the railway line.

‘Passengers are strongly advised to avoid busy peak periods and travel on earlier or later trains because of the reduction in services at key stations like Surbiton.

‘We are looking to see if we can improve the number of services calling at Surbiton station in order to minimise further disruption during this strike action.’ 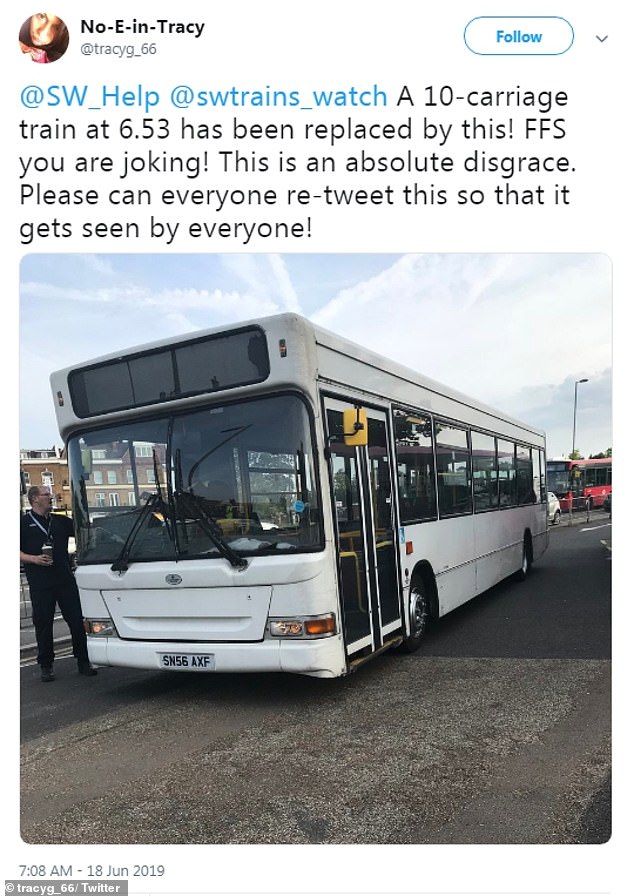 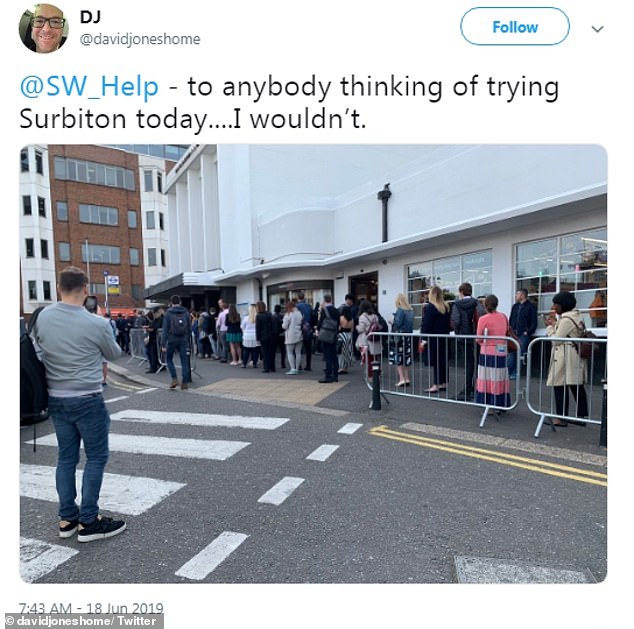 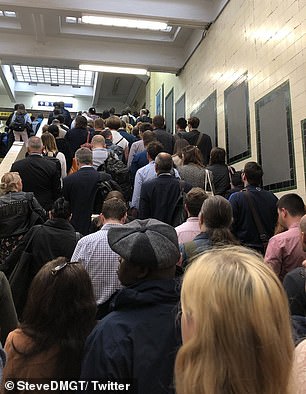 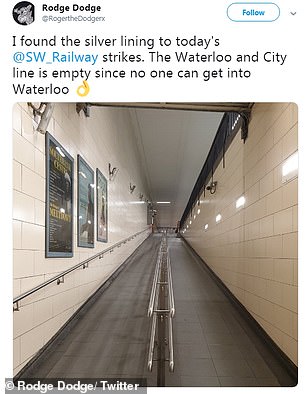 Pictured, left: Chaos at Surbiton as commuters struggle to make their way to work and, right, Waterloo is empty as people find themselves unable to get to the south London station 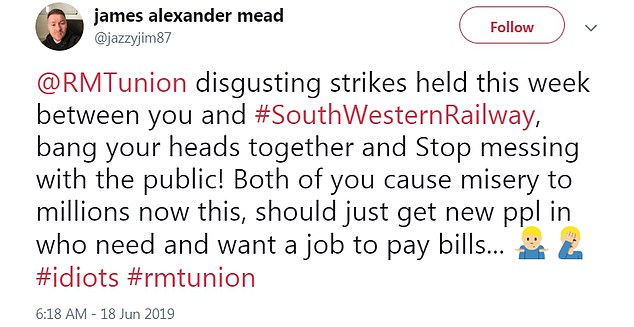 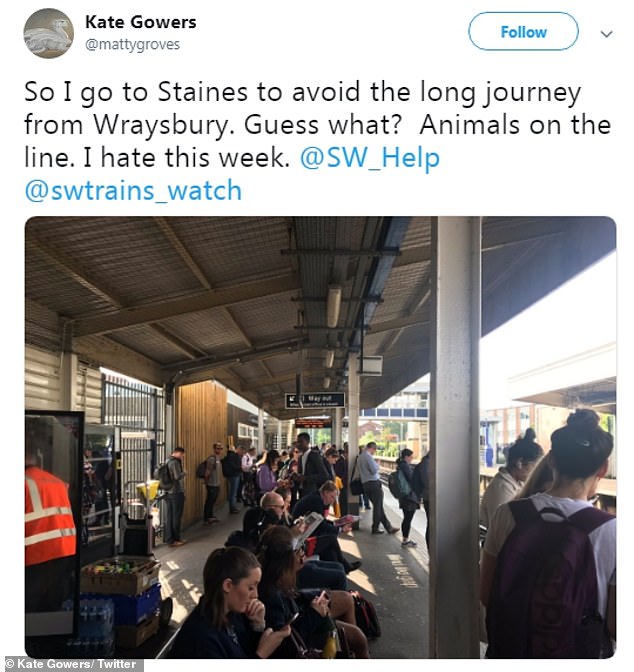 Meanwhile in Staines, animals on the line reportedly added to the problems blighting the morning commute 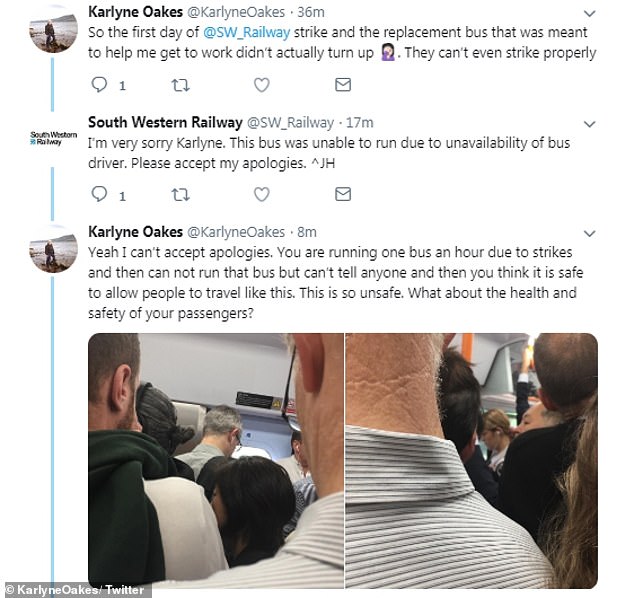 SWR say the strikes are ‘unnecessary’ and branded the union ‘cynical’ for matching the timing of their action with Royal Ascot.

It follows 29 days of striking from RMT over the past two years. In February as planned walkout was called off when RMT hailed ‘substantial progress’ in talks.

Union members had also called off strikes on Northern Rail after the provider agreed to provide a conductor on all of its trains.

Which routes will be affected during RMT’s five-day strike?

NO SERVICE BETWEEN – Bristol Temple Meads to Yeovil

REDUCED SERVICE – Every other line, apart from Shanklin to Ryde Pier Head, where services will remain normal

For those heading to work in London, that means disruption to

Between Shepperton and Teddington there will be no SWR trains, but rail replacement bus services are running

A number of high profile events are being held this week which could be affected by the strikes, including the Royal Ascot racehorse meeting, music concerts at Hampton Court, and a gig by rock band Metallica at Twickenham on Thursday. SWR said it will run extra trains to the events.

Industrial action was suspended in February when it appeared a resolution was in sight, but the union is renewing strikes after accusing the company of ‘dragging its heels’ in protracted talks over the past few months.

The RMT said SWR was not prepared to give assurances that its new operational model will not move to driver controlled operation, which sparked fears of a ‘stitch up.’

According to the RMT, the train company pledged in February that ‘each passenger train shall operate with a guard with safety critical competencies’, which led the union to suspend industrial action.

Union officials said since then it has been ‘stalemate’, accusing the company of ‘rowing back’ on its public pledges.

He added: ‘RMT has campaigned relentlessly for the principle of putting safety on the railway first and the current stalemate over the safety-critical role of the guard on SWR trains cannot be allowed to drag on any longer.

‘Our members have been left with no choice but to go ahead with strike action throughout this week. They are angry and frustrated that despite suspending action in good faith, and entering into talks in a positive and constructive manner, South Western Railway have dragged their heels and failed to bolt down an agreement that matches up to our expectations on the guard guarantee.

‘Worse than that, the company have refused to give assurances on the future operational role of the guard, fuelling fears amongst our members of a stitch up.

‘We thank the public for their continuing support and understanding that this dispute is all about safety, access and passenger service on Britain’s increasingly violent and dangerous railways.

‘That situation has been compounded by an insistence that future operational models will be governed by the protection of company profits and not the safety of the travelling public.

‘For more than three months we have sought to negotiate a conclusion to this dispute and it is wholly down to the management side that the core issue of the safety critical competencies and the role of the guard has not been signed off. It is because of that crucial failure by SWR that we have had no option but to lift the suspension and move back into strike action.’ 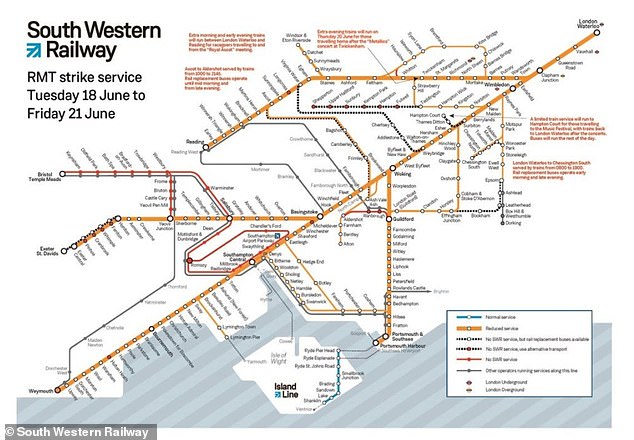 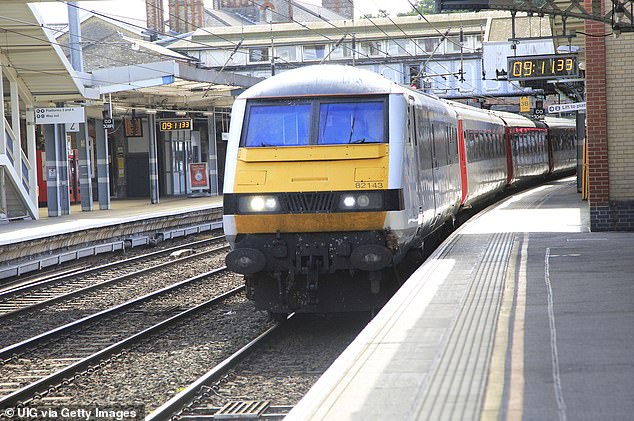 The RMT, whose members are mostly guards, is protesting against the decision by rail operators to make drivers open and close the doors on new trains. A file photo is used above for illustrative purposes only [File photo]

An SWR spokesman said: ‘It’s very disappointing that despite having had dates in the diary for what we hoped would be further constructive talks, the RMT union decided to call disruptive strike action over the course of five days.’

The company said it met with the union last week and agreed to arrange new dates to continue those talks. 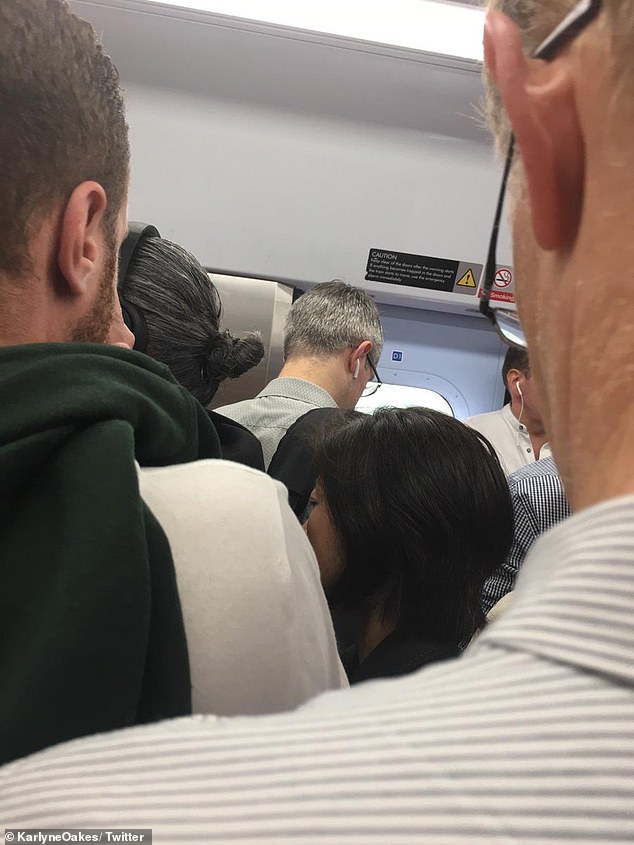 ‘However, they seem insistent on going ahead with their unnecessary strike which will impact our customers and colleagues alike.

‘The RMT has always said it wanted us to keep the guard on every train which is what we have offered as part of a framework agreement.

‘We want to move the conversation on to how we operate our new trains and take advantage of the new technology on board to benefit our customers.

‘We remain committed to finding a solution that will help us build a better railway for everyone. We will do everything we can to keep customers moving during these strikes but would like to apologise for the disruption this unnecessary action will cause.

‘Passengers are strongly advised to plan their travel in advance as services are likely to be busier than usual because of the strike action.

‘Rail replacement services and ticket acceptance on other bus and rail networks have been organised where possible, whilst fans attending events at Twickenham, Hampton Court, Royal Ascot, and elsewhere, are advised to allow extra time for their travel.

‘Customers will be able to see amendments to their train services, as currently published on our website.’

Moeen Ali hoping for more spin after day of struggle in Colombo warm-up match
Dodgers' Ryu accepts one-year, $17.9M qualifying offer
Meet the Hollywood trainer who can take years off you (without you breaking a sweat)
Mother turns detective to track down CCTV of her daughter's hit-and-run crash
Binge eating videos find big audience, even for weight...
Coronavirus toll hits 100,000 as Slovakia and Peru are the latest countries to confirm cases
Ministers are accused of easing coronavirus lockdown by stealth
'Scandalous' RBS helped fraudsters cheat the taxman